- Kos - The Fortress
(relief in the fortress of Bodrum)

The town of Kos (It. Coo), located at the eastern tip of the island by the same name, was founded in the IVth century BC: it soon became one of the richest centres of the region: at the beginning it was ruled by the Persian governors of nearby Halicarnassus; after Alexander the Great defeated the Persians, Kos fell within the sphere of influence of the Ptolemies, the Greek dynasty which ruled Egypt and later on of the Romans. In the IInd century AD it was part of the Asia Minor province and it enjoyed great prosperity.
After the fall of the Byzantine Empire in 1204, Venetians and Genoese competed for supremacy on the very impoverished island: the Genoese managed for a while to add Kos to the other large islands (Metelino and Scio) near the Asian coast they already controlled, but in 1315 Vignolo de' Vignoli, the Genoese lord of the island, called in the Knights of St. John.

Eastern (above) and western (below) views of the fortress

Sunday, December 10th, 1815. We left the high rocky coast of Anatolia; and at half-past ten stopped at Cos. (..) The chief reason why my Greeks had feared to leave Anatolia was that at Cos there is no port to shelter them.
William Turner - Journal of a Tour in the Levant - 1820
During four days that we were detained upon the island, we renewed our search after antiquities, and particularly after Inscriptions. We had every reason to believe that remains of this kind might be found within the Castle; but our entrance was, as usual, strictly prohibited. The Consul himself had never obtained admission; so cautious are the Turks in preventing foreigners from inspecting their fortifications.
Edward Daniel Clarke - Travels in various countries of Europe, Asia and Africa - 1817-1824
The fortress of Kos has a long rectangular shape and it protects a small harbour of shallow water: its appearance is not as spectacular as that of other fortresses built by the Knights. 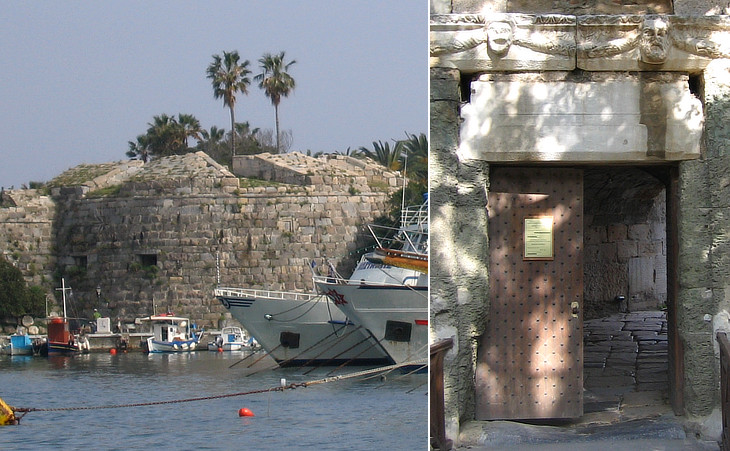 At the west extremity of the town is a very fine large castle, built by the Venetians (!), which the Turks, with their accustomed jealousy, forbid all Franks to enter. It has now but few guns mounted, and those without carriages, and out of order. On the east and south it has a fosse, now dry, with a drawbridge; on the north is open to the sea, and on the west, has the ancient port. Turner
We ventured, however, upon the drawbridge which crosses the moat on the land side; and as we drew near to the gateway, observed, above the entrance, six masks, of the most exquisite sculpture; some of these were represented with beards. We saw, also, very distinctly, the letters of a Greek Inscription on each side of the entrance. Clarke
The only fortification of some relevance is a round bastion built by Grand Master Fabrizio del Carretto (1513-1521); its shape is very similar to the larger bastion that this Grand Master built in Rhodes.
In the construction of the fortress the Knights made use of materials taken from the ruins of the ancient town and of the Asclepeion, a shrine on a nearby hill.

View of the Inner Fortress

It is with some surprise that one discovers that the walls hide inside another fortress. It was built between 1450 and 1478: in 1480 the Ottomans were unable to conquer it. The Knights however thought that it needed to be strengthened: they eventually decided to build thicker walls on three sides of the old fortress which ended up by being hidden by them. 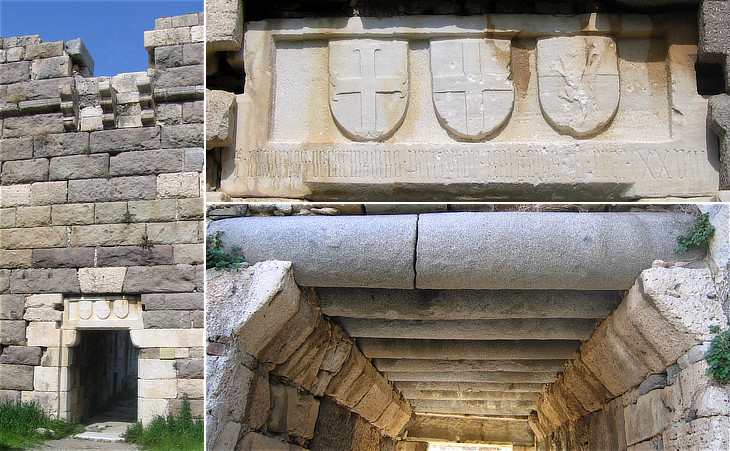 (left) Gate of the Inner Fortress; (right-above) coats of arms of Grand Master Pierre d'Aubusson, of the Order and of Edoardo di Carmadino, commander of the fortess in 1478; (right-below) ancient granite columns used to build the gate

In the inner fortress the use of columns and stones taken from ancient buildings is very noticeable. Marble slabs, perhaps from sarcophagi, were used for the many coats of arms which embellish the gates and towers. The image used as background for this page shows a relief in the inner fortress portraying angels holding the coat of arms of France. 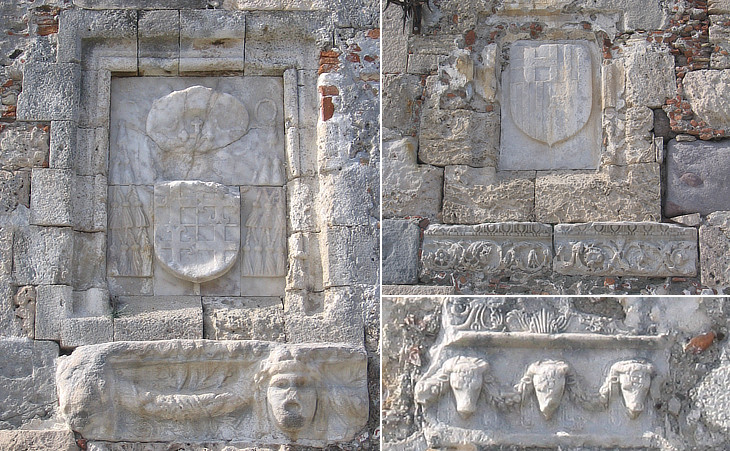 Pierre d'Aubusson was Grand Master for 27 years (1476-1503) and he promoted first a major plan of reinforcement of the old fortress and after 1480 the construction of the new one. It is possible to identify the improvements he made after 1489 because in that year he was appointed cardinal and after that date his coat of arms was framed by a cardinal's hat. Ancient reliefs were often placed below the coats of arms. Inner fortress: view from the south-eastern corner with the Asian coast in the background

The inner fortress has a more varied and interesting design than the outer one.
In June 1522 Sultan Suleyman laid siege to Rhodes and sent his troops also to Kos and St. Peter's Castle, mainly to make sure these fortresses could not send help to the main town of the Knights. In late December 1522 the Knights defending Rhodes capitulated and agreed to withdraw also from all their other fortresses: they left Kos in January 1523.
In May 1912 Kos was occupied by Italian troops (Italo-Turkish War) and for a few years a garrison was located in the old fortress.

In the morning I went to the bath (which is not so bad as the wretchedness of the town made me expect) with the bishop. (..) Cos (it is still called and written so by the Greeks, Kos), is in the most wretched condition of any of the Greek islands I have seen, Cyprus perhaps excepted. It contains only about 8,000 souls, of which 5,000 are Turks, and 3,000 Greeks. There are also about fifty souls of Jews in the island. The town, which bears the same name as the island, contains about 2,000 houses, mostly Turkish; of these, however, the better part are in ruins, and some so tottering that one walks under them with dread. The walls too are almost all thrown down, and their place supplied by badly built and tottering houses. This state of ruin was caused by violent rains in 1812, which soaked and threw down the houses and walls. There was an earthquake at the same time, which, though it produced little visible effect, probably contributed to weaken them. Turner
The medieval town of Kos was located next to the fortress and it was protected by low walls and a small moat filled with water. In 1933 a strong earthquake damaged what was left of the walls: it unearthed the ruins of ancient buildings and Italian archaeologists excavated the area to bring to light Ancient Kos.