- Calimno (Kalymnos)
(relief in the fortress of Bodrum) 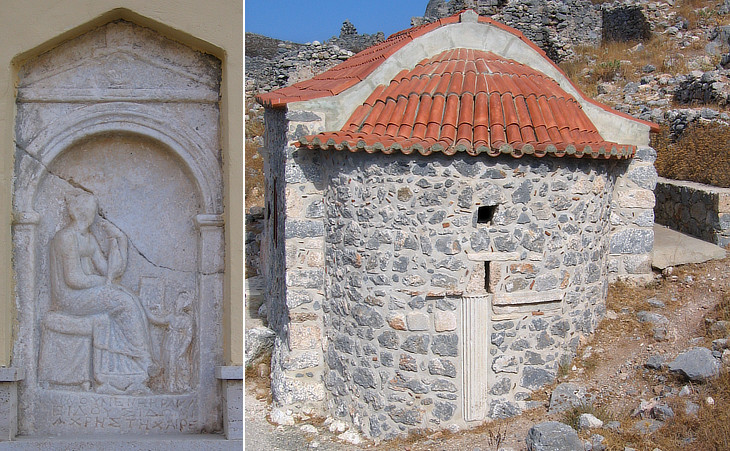 (left) Ancient tombstone at Pothia; (right) ancient column and stones in a church at Megalo Kastro

Calymnos, November 11, 1854. After duly presenting my firman to the Pasha at Rhodes, (..) I set sail in a caique for Calymnos, accompanied by an Italian artist, Signor Panni, who was staying at Rhodes, and by my cavass, a smart young Albanian. (..) I was told privately that I had come at an inopportune moment, and that it would be hopeless to attempt excavations, as the land was all private property, and no one would consent to my digging in his field. I thought, therefore, it would be more prudent not to hurry matters, and so kept the Pasha's letter in my pocket. (..) I employed all my leisure time in copying the inscriptions inserted in the walls of the various churches in the town of Calymnos and the neighbourhood.
Charles Thomas Newton - Travels and Discoveries in the Levant - 1865
Together with the adjacent islands Kalymnos appears in the Catalogue of Ships of the Iliad. After the Persian Wars it became an Athenian ally. Before the end of the IIIrd century BC it was annexed to Kos. Newton spent five months on the island searching for evidence of its importance in antiquity.

View of Pothia, the modern town: in the distance 1) Chrissocherias Kastro; 2) Megalo Kastro

Pothia is located on a bay at the southern end of Kalymnos: it is rather modern because until the end of the XVIIIth century most of the population of the island lived inside the walled town which is now known as Megalo Kastro (Great Castle). At the centre of Pothia there is a yellow building which housed the offices of the Italian administration (1912-1943): the image used as background for this page shows a detail of that building. You may wish to see some Italian buildings of the same period at Rhodes. 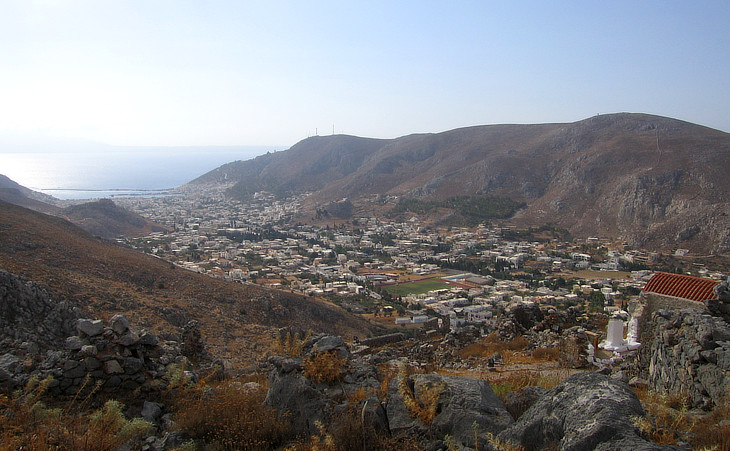 View of Pothia from Megalo Kastro

I established myself in the upper town, where I spent some days in copying inscriptions and collecting coins. (..) I commenced my operations in the middle of an ancient cemetery which is situated between the modern harbour, now called Pothia, on the eastern coast, and Linaria on the west, and that behind it is a range of mountains crossing the island in a direction north-west by south-east. (..) At Pothia a town is growing up, which will probably some day be the capital. (..) I find great pleasure in the kind of life I am leading here. I remain in the fresh air all day long, enjoying the beautiful view. Newton

Between the port and the upper town is a castle, which stands on a height a little way inland. In one of the walls is an escutcheon with the arms of the Grand Master, John de Lastic. Within the castle is a little church dedicated to the Panagia. The jamb of the entrance doorway to the castle is a block of marble, inscribed with a dedication of a temple. Newton
The fortress protected the harbour of the island: it was built on a small rocky hill located one mile inland.

View of the main tower; coats of arms of the Order and of the commander of the fortress; windmills

Inside the fortress there are now some small churches while next to it two windmills were built after the fall of the castle. The Order of the Knights of Rhodes was led by a Grand Master.

In the old times, when the Archipelago swarmed with pirates, the Calymniotes dwelt in a fortified city perched on the top of a steep rock. Sentinels were perpetually stationed on the hills to give a signal in case of the approach of pirates. (..) Since the Greek war of independence, the greater security of the Archipelago has led the Calymniotes to desert their old fortified city, and to build a new one a little lower down the mountain-side. Newton
Megalo Kastro was actually the ancient Chora (main town) of Kalymnos: a walled town rather than a castle: it was located on an isolated hill which in itself was a fortified location.

Megalo Kastro: (left) details of the fortifications; (right) coats of arms of Grand Master Fabrizio del Carretto and of the local commander

After the fall of Constantinople in 1453, the Knights of Rhodes, with the support of Pope Paul II strengthened their fortresses: from the coats of arms of the Grand Masters it is possible to identify the period during which the fortifications were improved: Del Carretto was Grand Master between 1513 and 1521, right before the fatal year 1522 during which Sultan Suleyman forced the Knights to capitulate in Rhodes and to surrender all their other fortresses.

Megalo Kastro: detail of a church and coat of arms of a local commander

The inhabitants of Calymnos, like those of Syme, Chalce, and other small islands near Rhodes, are celebrated as divers, and spend the whole summer in fishing up sponges on the coasts of Asia Minor and Syria. (..) In the month of May a little fleet of caiques sets sail from Calymnos, manned by the greater part of the able-bodied male population. The profits of the sponge-fishery are very considerable. The divers in each caique enter into partnership. (..) The cause of the dearness of sponges is the great risk of life and capital incurred in the first instance. The diver descends, holding a flat stone in both hands, to assist him in sinking, on which stone a cord is fastened. When he gets to the bottom, he puts this flat stone under his arm, and walks about in search of sponges, putting them in a net hung round his neck, as fast as he uproots them; he then pulls the cord as a signal, and is drawn up again. (..) Calymnos, the greater part of which is very barren and does not produce more than one-third of the corn it consumes, has been constantly increasing in wealth and population from the development of the sponge trade. The present number of inhabitants is reckoned at about ten thousand, of whom about half are males. (..) The large profits of the sponge fishery in good years rather lead them to despise agricultural pursuits, and they leave much of the operations of husbandry to be performed by women, passing their time in winter in the cafes, where they sit smoking over a pan of charcoal, and recounting the singular adventures which they have met. Newton
The abandonment of the walled town was mainly due to the move from agriculture to sponge fishing. It has been a ghost town for a very long period during which most of its buildings collapsed. In recent years the remaining churches and fortifications were included in a program of restoration.

Kastelli: detail of the wall going down to the sea

A steep mountain rises from the western shore, on the summit of which is a mediaeval castle with cisterns. I did not examine this, but my companion, the Greek schoolmaster of Calymnos, assured me that there were no inscriptions there. Newton
The Knights of Rhodes built a castle also on the western coast of the island: the site (a headland) is still called Kastelli, but at first sight one does not see any signs of a castle; only a more careful survey of the area reveals the remains of a long wall which from the top extended down to sea level.

Kastelli: walls of the keep and a modern assailant

A few walls of the keep still remain at the top of the hill above a very precipitous rock which today attracts climbers who maybe are unaware they are re-enacting an Ottoman assault.