- Lero (Leros)
(relief in the fortress of Bodrum) 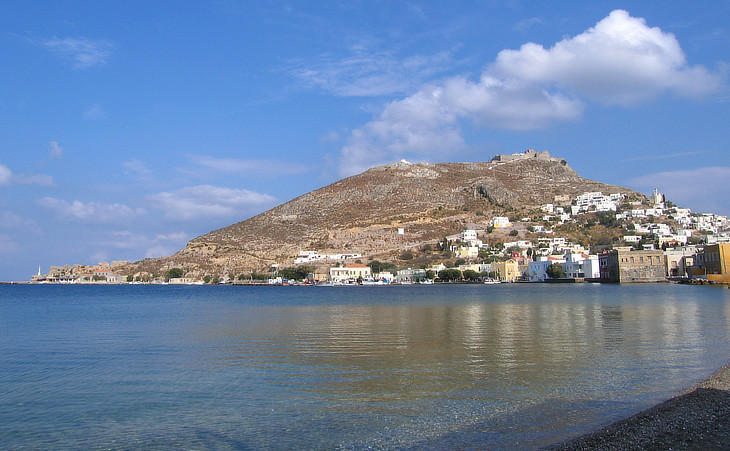 Overall view of the castle of the Knights, the town and Bourtzi, the Ottoman sea castle

Lero is a little to the South of Patmos, much of the same bigness, but far inferior to it as to the soil; nor is it so much inhabited, not having above one small town, and a few stragling Villages and Monasterys. Here are the ruins of a large Castle on a hill, and about 20 very great marble pillars which are entire, and are too far from the Sea to be carryed away. They say it was a Temple built in honour of Diana, and was (after the preaching of St John) made a Church, and dedicated to the blessed Virgin.
Bernard Randolph, b. 1643. The present state of the islands in the archipelago. 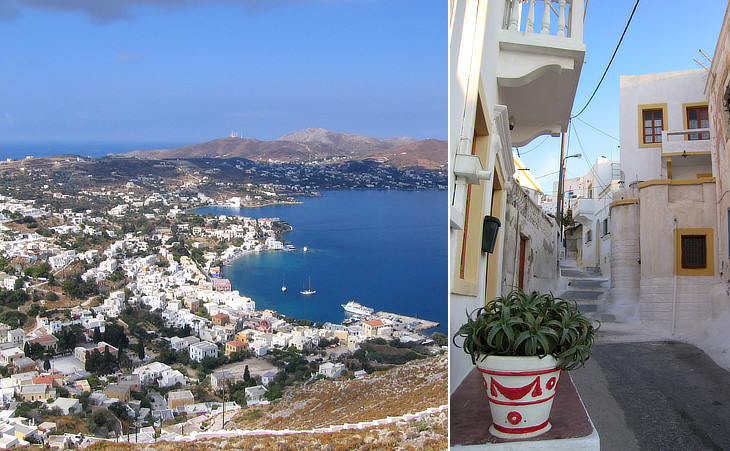 (left) View of the town and harbour from the fortress; (right) a street of the town

From Patmos we re-embarked in our Samian vessel, and started for Leros, in hopes of catching the Austrian steamer, which touches at that island once a fortnight on her way from Constantinople to Alexandria. (..) The little town is composed of square white houses, like those of the scala at Patmos, and, like that place, it lies in the recesses of a landlocked harbour. (..) It seemed strange enough that so fine a packet as the 'Vesta' should put into so insignificant a port connexion as this. (..) It appears that the inhabitants of Leros are possessed of some wealth, and that latterly many of them have settled in Alexandria, and have become shopkeepers there and in consequence of this, the community in Egypt have found it worth their while to guarantee the Lloyd's company a sum equivalent to £1000 sterling annually, on condition that they carry on communications for them with their native island.
Henry Fanshawe Tozer - The islands of the Aegean Sea. Published 1890, but Tozer began his travels in 1874

Of the ancient capital no trace survives, though it was probably where the modern town and the mediaeval castle now stand.
Dawkins, R. M., & Wace, Alan J. B. (1906). Notes from the Sporades.
The fortress of Lero is located on a high rock on the eastern coast of the island: it has three enclosures: the fortress was enlarged and strengthened by Grand Master Emmery d'Amboise (1503-1512).

Inner part of the fortress

According to a legendary account in 1505 (or 1506) the Ottoman corsair Kemal Rais landed at night with 500 men at Lero and hid until dawn: he then tried to take the fortress by surprise when its defenders left to go farming. There was only one knight left in the fortress; when he saw the Ottomans he dressed the women and the children in armour and they all made their appearance on the top of the walls; the Ottomans thought it better to abandon their plan and left the island. A boat which makes a tour of the island is named after Khayr al Din (1465-1546), an Ottoman corsair best known as Barbarossa for his red beard (see image used as background for this page).

Passage to the keep and view eastwards

High cliffs protected the fortress from attacks coming from the sea while the three enclosures allowed the defenders to easily resist assaults from land, which they did on four occasions. 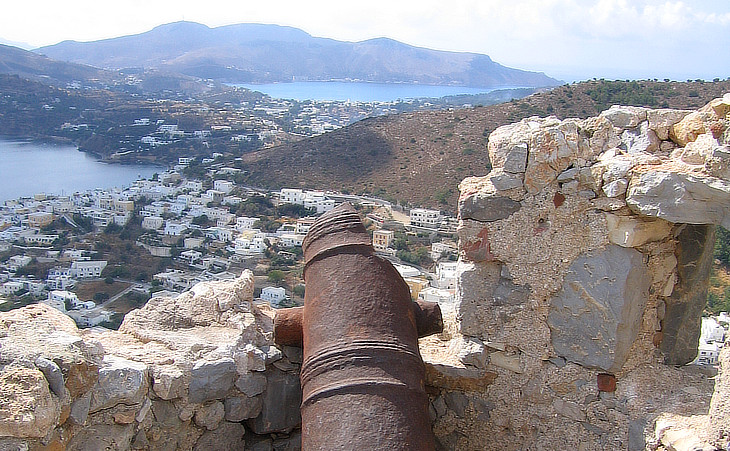 View towards the southern part of the island

Lero is made up of the emerging part of a mountain range and at points where it extends into the sea it is very narrow: its many bays provide good natural harbours. 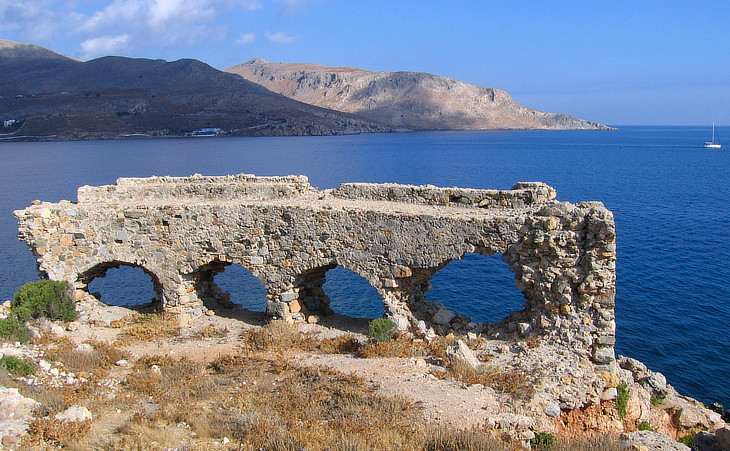 Gun batteries of Bourtzi and the nortern part of the island

In 1648, during the War of Candia, the Venetians seized Lero and in the same period they occupied several other islands including Tenedo and Imbro from which they were able to block supplies en route to Constantinople. After the Venetians left these islands the Ottomans strengthened their fortifications on some of them including Lero where a small castle was built to protect the access to the harbour.

The fortress retains some memories of the Knights' rule as well as some very old churches; the upper part of the fortress however was damaged during WWII: the Italians had fortified Lero and used one of its deep water bays as a base for their navy; after the capitulation of Italy in September 1943, the Germans launched several air strikes and eventually in November they occupied the island.