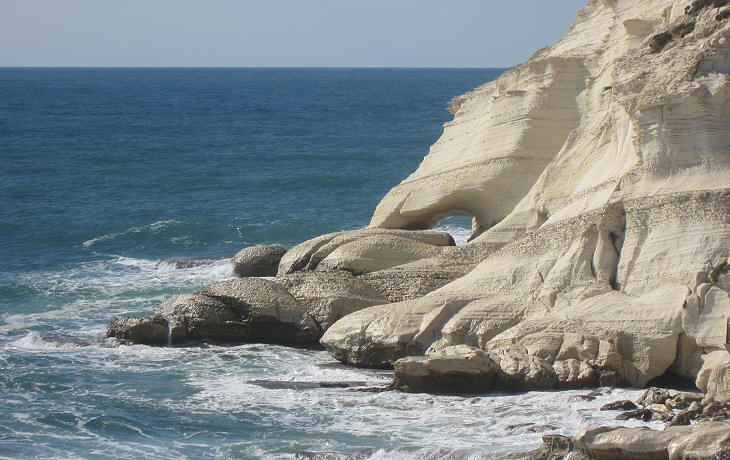 This end of the mountain, which is probably the beginning of Antilibanon must be the antient Scale of the Tyrians, mentioned by Josephus. (..) It seems also to be the white promontory of Pliny, and is known by the same name among Europeans, which is derived from the white clifts to the north; on it is the famous road, which is said to have been made by Alexander. (..) On the top of the hills called by the inhabitants Nakoura, we came to a small tower.
Richard Pococke - A Description of the East and Some Other Countries - 1745
Friday April 7th (1817) - At six we left the gate of Tyre. Our road lay along the sea through fields or rather marshes bearing a little corn. For near three hours we rode along fields and marshes with low green mountains near us to our left. At a quarter before nine we ascended a low mountain named Ras el-Nakoora in the rocks of which I observed several deep natural caves.
William Turner - Journal of a Tour in the Levant - 1820 One of the caves

Under the south side of this cape, there is said to be a very extraordinary large grotto, at some height from the water, to which they can go only in a boat. Pococke
Rosh Haniqra is situated at the border between Israel and Lebanon. The white cliffs of the promontory are a landmark which can be seen from as far away as Mount Carmel. They are a unique feature in the otherwise rather dull coast of Israel. Although from a historical viewpoint the promontory was located in Phoenician territory, Turner felt he was entering the Holy Land because he could see the northern coast of that country in front of him. 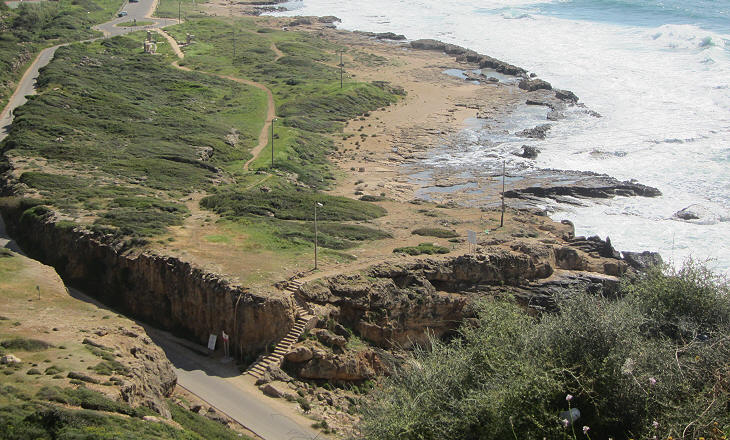 The ancient trail and the site of the railway to Beirut (now replaced by a road); see a larger view in the introductory page

In the past the site was known as Scala Tyriorum, the Ladder of Tyre. Travellers who followed the ancient route from Antioch to the Holy Land along the sea saw wide low steps on the rocks. They were attributed to Alexander the Great who ordered their carving to make the passage of his army en route to Egypt easier. The steps became part of Via Maris, the Roman road along the coast which can be seen in Tabula Peutingeriana, a Vth century map.
During WWII British authorities cut the ancient path by building a railway through the promontory to link Lebanon with Palestine and Egypt. 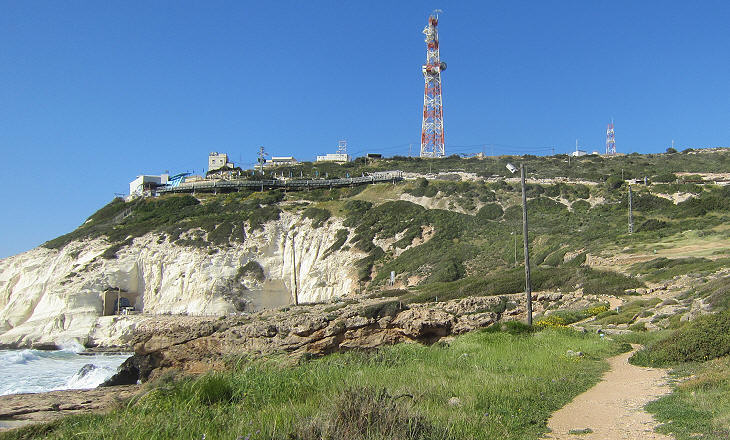 Military installations on the border

In 1946 the railway was blown out by Haganah, a Jewish paramilitary organization with the objective of preventing its use by Arab troops. Eventually in 1949 an armistice agreement was signed between Israel and Lebanon at Rosh Haniqra. 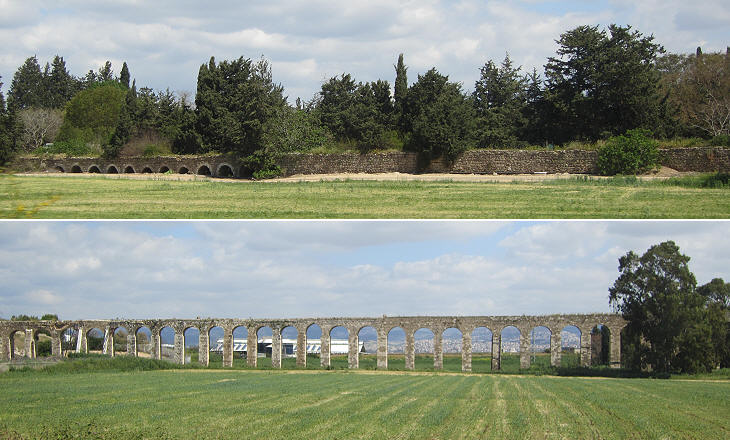 Sections of an aqueduct on the road to Acre

The rest of my road lay along a fine plain laid out in fields of pasture and of ploughed land sown with wheat and barley the former of which predominated. On this plain I saw several remains of ancient walls and another small granite column was standing on a low mountain to the left. About an hour and a half before reaching the city I saw to my left large remains of a Roman aqueduct of which also several arches were standing near its walls. Turner
The aqueduct was built in the late XVIIIth century to supply water to Acre. However the conduit was poorly maintained because Turner noted that: The spring water of Acre within the city is plentiful, but brackish and the inhabitants are therefore supplied from wells on the sea shore half an hour's distance. 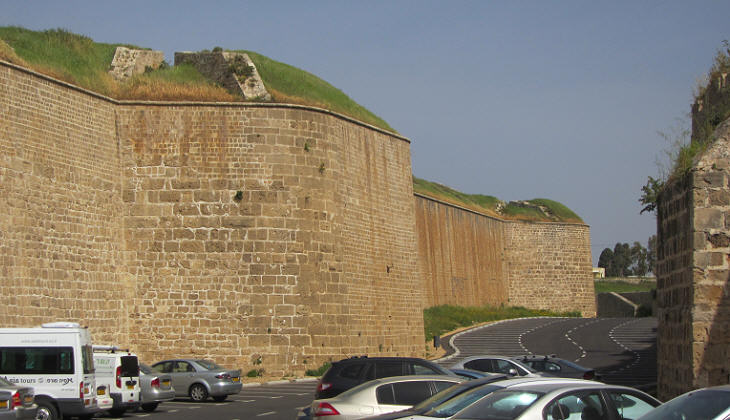 Acre stands in a very large and fertile plain, bounded on the north, at about twelve miles distance, by the mountains antiently called Antilibanon; and to the east, by the fine and fruitful hills of Galilee. (..) The Greeks gave it the name of Ptolemais from one of the Ptolemies, kings of Egypt. And when it was in the possession of the knights of St. John of Jerusalem, it was called St. John Dacre. As this port must always have been of great importance in time of war, the town has, consequently, undergone great changes. Pococke
The city as I approached it looked excessively beautiful. It is surrounded with a fosse and a wall on which cannon are planted peeping through embrasures at regular intervals and trees rising above it from the inside. The ground immediately before it is planted with orange, lemon, palm trees under which were feeding camels, oxen, horses and goats. Turner The walls which impressed Turner were very new as they were rebuilt by Ahmed al-Jazzar, Ottoman governor of Acre after the 1799 failed French siege of the town. The defenders of Acre were helped by a British fleet at the orders of Sir Sidney Smith which seized the French siege artillery which was shipped from Egypt, so Turner wrote: The present fortifications which I look on with delight as glorious memorials of the valour of my countrymen consist of a double wall of which the inner one was added by Djezzar after the retreat of Buonaparte. (..) These new walls built from plans given by English engineers have been surrounded by the present Pasha with a fosse about fifty feet wide into which the sea may be easily introduced. 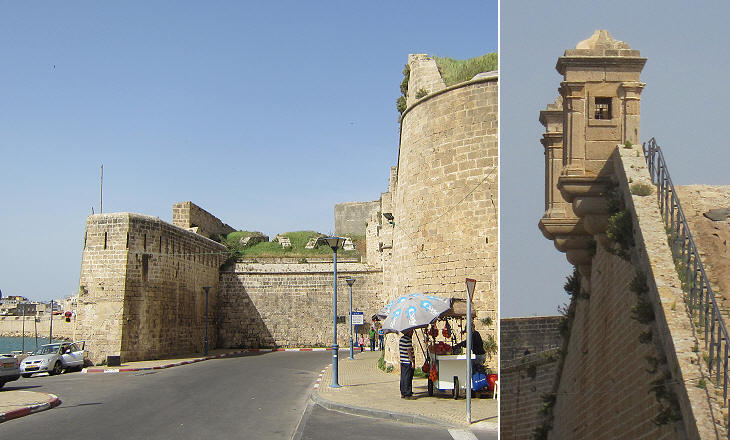 Al-Jazzar was one of many provincial governors who in the late XVIIIth century, similar to Ali Pacha of Tepeleni, profited from the weakness of the central Ottoman government to establish their personal rule on the territories they were appointed to. Djezzar Pasha seized all the houses in Acre except about a hundred whose inhabitants were Turks who made complaint to Constantinople and obtained a firman for the restitution of their miserable hovels. (..) The fish brought to Acre, generally very abundant, is subject to a heavy duty of a third of the price to the Pasha. (..) In the country round Acre oppression is carried to its highest pitch. Every thing, even the straw, is taken from the peasants who in consequence will not cultivate the ground more than they are absolutely forced to do and prefer gaining a miserable livelihood by bringing to the towns wood and water on which alone there are no duties to be paid. Turner 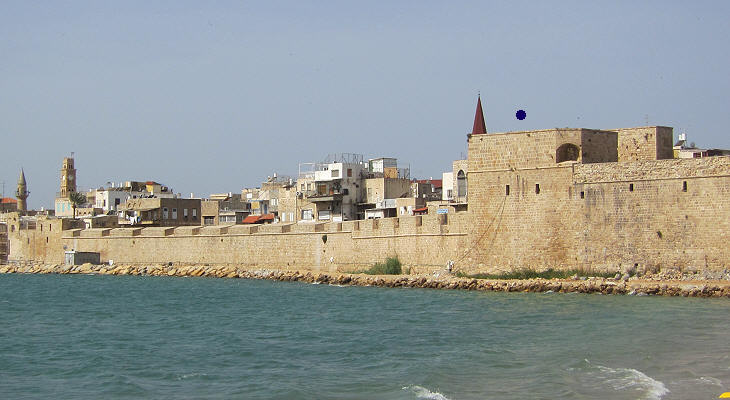 Maritime walls incorporating Burj es-Sultan, a tower built in the XIIIth century when Acre was a Christian stronghold (blue dot)

(The walls) are however by no means of equal strength being in some places towards the sea no more than fifteen feet high. (..) The port is an extensive bay too shallow for large ships which always anchor off Kaifah about three hours south of Acre (which is) sheltered by Mount Carmel. Turner
Acre had been the main port of the Holy Land for centuries, but in 1817 it was already largely silted and there was no fear that large warships could enter it, so the walls were not strengthened. 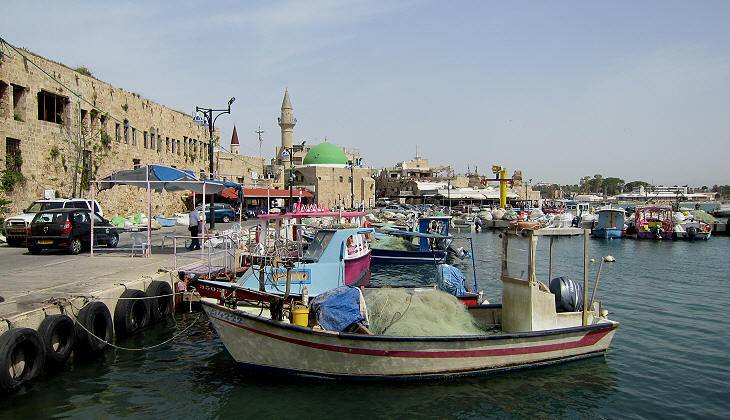 The present town seems to be on the spot of the old city, and is washed by the sea on the south and west sides; it has a small bay to the east, which seems to have been the antient port, but is now almost filled up; there are great remains of this old port, within which, small ships come to anchor in the summer, and take in their lading. Pococke
Today only a few fishing boats moor at the harbour of Acre. Kaifah (today's Haifa) replaced Acre as a port during the early XXth century and definitely after the proclamation of the State of Israel in 1948. You may wish to join Turner in an excursion to Kaifah and Mount Carmel and see some of the monuments of the modern town.
The image used as background for this page shows an Ottoman marble frame above the Land Gate which contained an inscription or the tughra (monogram) of a Sultan.

Move to page two to see the Crusader and Ottoman monuments of Acre.