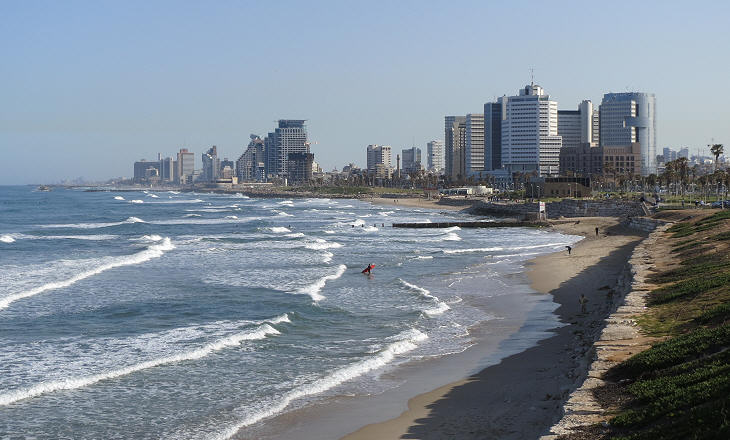 The promenade by the beach and the modern steel and glass buildings give Tel Aviv the appearance of Santa Monica (CA) and the cyclists and joggers who pack the promenade, especially on Saturdays, add to this feeling. Tel Aviv was founded in 1909 by a group of Jewish settlers who wanted to live in a modern urban centre, rather than in the narrow and dirty streets of Jaffa. Today the Municipality of Tel Aviv incorporates Jaffa. 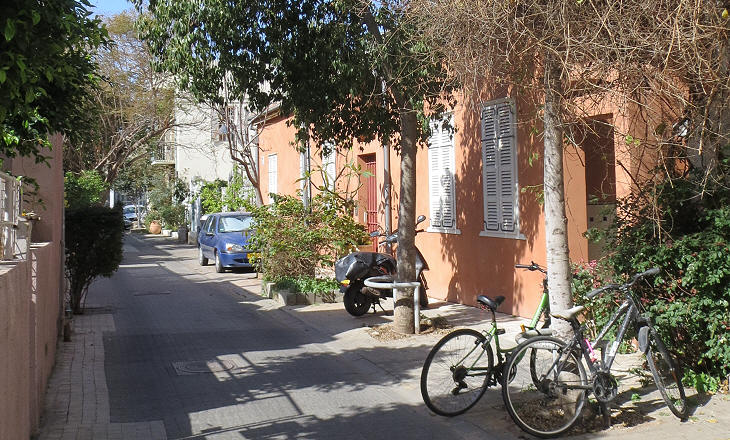 Neve Tsedek (Abode of Justice) was the first Jewish neighbourhood outside the walls of Jaffa, as it was established in 1887 and it was eventually incorporated into Tel Aviv which lay north of it. After a long period of abandonment the small buildings and pedestrian streets of Neve Tsedek have been restored and the neighbourhood has acquired a village-like appearance which has attracted many affluent young families (Tel Aviv has a rather low average age). 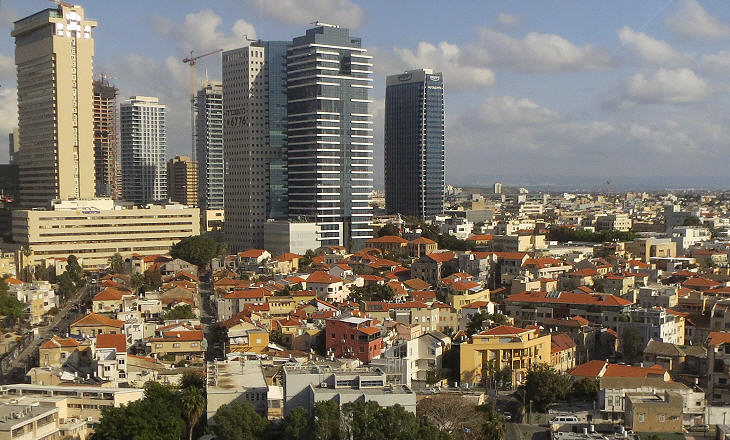 The first settlers of Tel Aviv wanted to live in buildings which visually indicated that they were not inhabited by Arabs. Red tiled roofs were typical of Europe, from where many of the settlers came, and different from the terraces which characterized Arab towns. Most of the modern buildings of Tel Aviv have terraces, so the red tiles indicate the oldest part of the town. Kerem HaTeimanim means 'Vineyard of the Yemenites', because the first inhabitants of this neighbourhood came from Yemen between 1880 and 1914. Today Kerem HaTeimanim is mainly known for its two markets: Carmel for bread, meat, fruit and other food and Nachlat Benyamin where artists, semi-artists and other characters sell their goods. With all due respect for their works of art I did prefer to have a second stroll at Nachlat Benyamin on a Saturday. 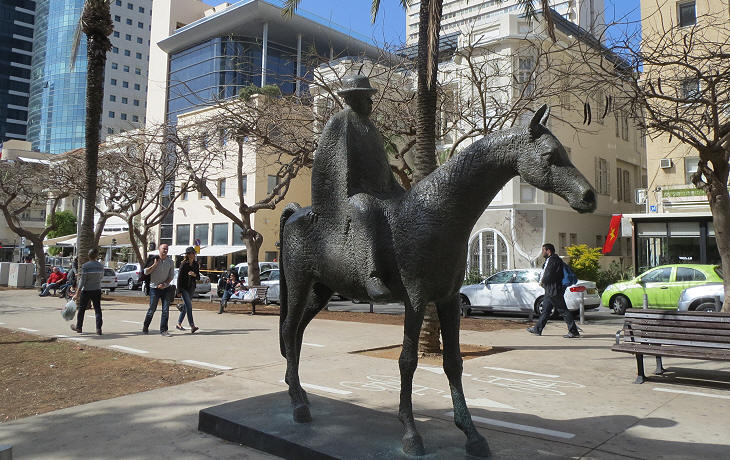 In 1922 Meir Dizengoff, a businessman from Bessarabia (today's Moldavia), became the first mayor of Tel Aviv, the development of which he had promoted in the previous years as town planner and by buying himself part of the land which was parcelled out to the first settlers. 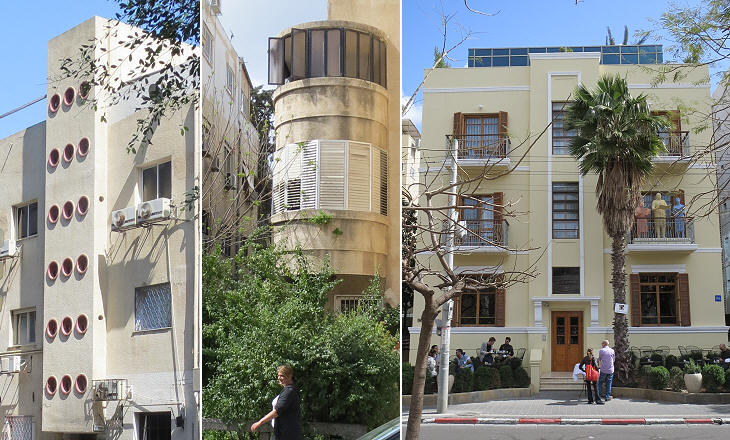 Rothschild Boulevard: (left/centre) two buildings with some interesting features which have not been yet turned into luxury apartments or hotels; (right) "The Rothschild Hotel Tel Aviv's Finest" and behind it the modern steel and glass building where most of the rooms are located

In 2003 UNESCO included some central areas of Tel Aviv ("The White City") in their World Heritage List (external link - it opens in a separate page) "as an outstanding example on a large scale of the innovative town-planning ideas of the first part of the 20th century. The architecture is a synthetic representation of some of the most significant trends of Modern Movement in architecture, as it developed in Europe."
"Modern Movement" is a very broad definition which includes a variety of styles developed between the two World Wars. In 2010 UNESCO added a paragraph on preservation: "The design of some individual buildings has been modified through rooftop additions even in registered buildings. Although within certain limits, such additions could be perceived as part of traditional continuity, to keep Tel Aviv as a vibrant, living city. Attention will need to be given to ensure the quantity of remodelled buildings is not enough to alter the urban profile, the original scale or parameters of the site." 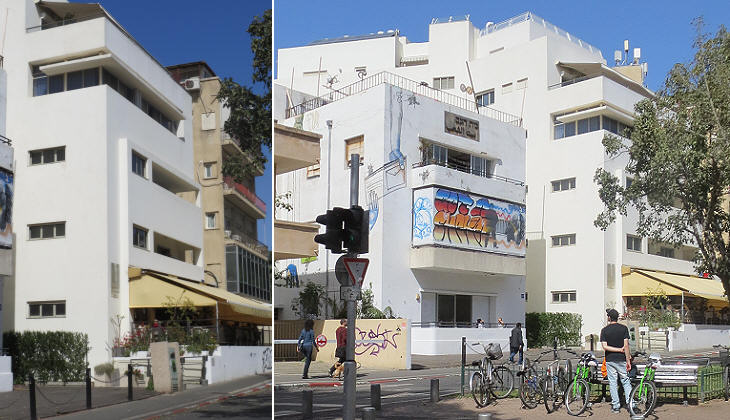 Two views of The Rothschild 71: (left) the façade (the original one did not have the top floor and the terrace); (right) from another angle showing what has been added

The inclusion in the World Heritage List has contributed to the loss of what UNESCO wanted to preserve because it has increased the real estate value of the buildings. Each block was designed to house from six to ten very simple apartments for families with a limited income. Today many of them have been enlarged to maximize their value. Only the façades of these blocks remain (and often they have been modified too). "The Rothschild 71" - as per their website - in a carefully renovated International Style house built in 1934 offers 25 suites, setting a local standard for luxurious short- and long-term accommodation. 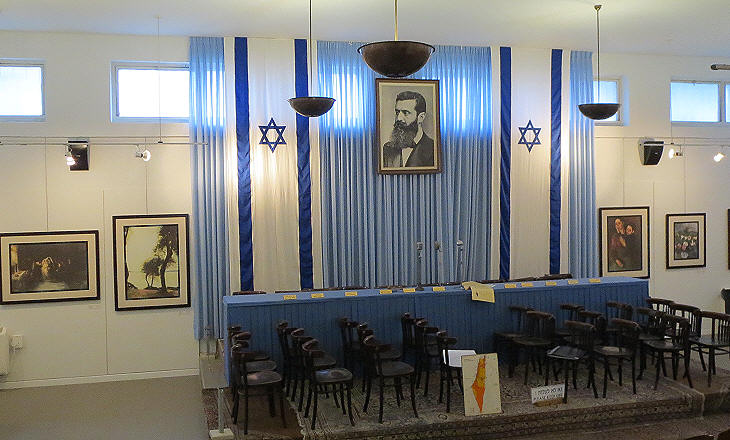 The Israeli Declaration of Independence was made on 14 May 1948, the day before the British Mandate was due to expire, in a hall of the Tel Aviv Museum of Art in Rothschild Boulevard which previously was the home of Mayor Dizengoff. Today it houses a museum with mementos of that event. The large photo portrays Theodore Herzl, the founder of the Zionist movement. 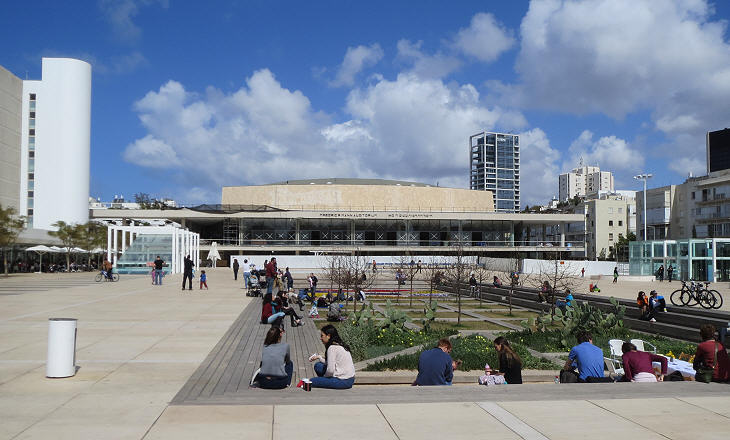 Habima Theatre at the end of Rothschild Boulevard

Tel Aviv has large pedestrian areas and public squares which are embellished with modern works of art. The image used as background for this page shows "Woman against the Wind", a large bronze statue by Ilana Goor in the sea promenade which calls to mind the Winged Victory at the Louvre Museum in Paris (external link). 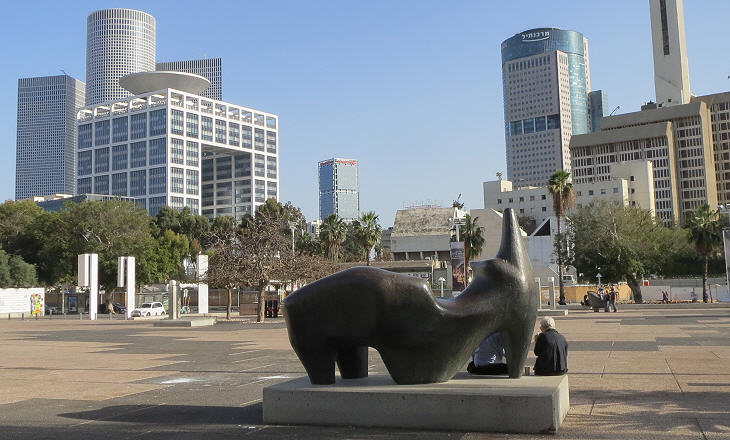 Public square of the Tel Aviv Museum of Art

The Tel Aviv Museum of Art was moved to its current location in 1971. It houses an impressive collection of XXth century works of art. The museum was enlarged in 1999 and 2011 by new wings. 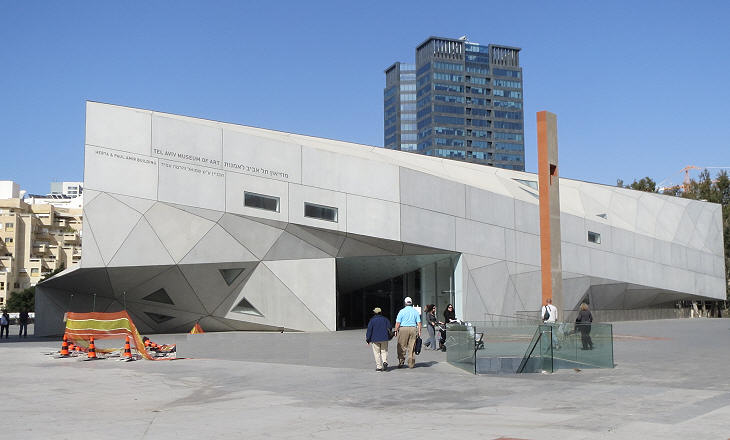 The latest addition, the Herta and Paul Amir Building, was designed by architect Preston Scott Cohen. The new wing houses 18,500 square feet of gallery space over five floors. Located in the center of the city's cultural complex, the program for the Tel Aviv Museum of Art Amir Building posed an extraordinary architectural challenge: to resolve the tension between the tight, idiosyncratic triangular site and the museum's need for a series of large, neutral rectangular galleries. The solution: subtly twisting geometric surfaces (hyperbolic parabolas) that connect the disparate angles between the galleries and the context while refracting natural light into the deepest recesses of the half buried building.
From Preston Scott Cohen Inc. website. The building represents an unusual synthesis of two opposing paradigms for the contemporary museum: the museum of neutral white boxes and the museum of architectural spectacle. Individual, rectangular galleries are organized around the "Lightfall", an eighty-seven foot tall spiraling atrium. The building is composed according to multiple axes that deviate significantly from floor to floor. In essence, it is a series of independent plans and steel structural systems stacked one atop the other, connected by geometric episodes of vertical circulation.
From Preston Scott Cohen Inc. website.