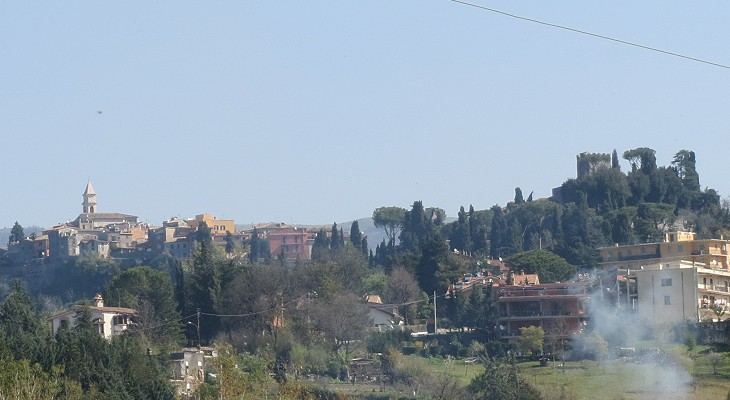 You discover towards the north two villages beautifully situated on the summit of a woody and well-cultivated hill supported by a range of mountains behind; one of these villages is called Canta Lupo the other Bardela. The latter is Mandela which on account of its high situation Horace represents as suffering much from the effects of the cold. As we advanced we found ourselves in a fine valley with beautiful hills rising close on our left, while on our right in the midst of fertile meadows, bounded on the opposite side by the hill of Mandela, and a ridge of successive mountains glided the Licenza, anciently the Bigentia, the favorite stream of Horace.
John Chetwode Eustace - A Classical Tour through Italy in 1802
This small town was known as Bardella e Cantalupo until 1873. The new name was taken from Horace's Epistle 18 Me quoties reficit gelidus Digentia rivus quem Mandela bibit rugosa frigore pagus (The cooling rivulet Digentia refreshes me. Mandela, a village wrinkled with cold, drinks it); the poet described his life in the countryside in a letter to a friend. His villa was situated close to a stream (today's Licenza) emptying into the River Aniene near Mandela. 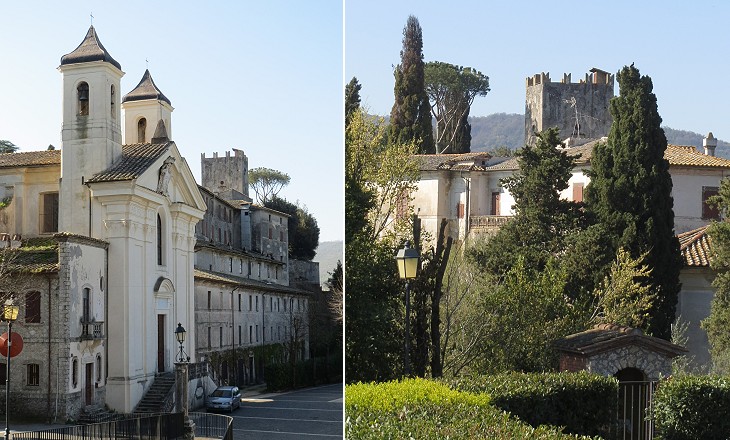 The castle of Bardella controlled the road along the River Aniene and at the end of the XIIth century it was acquired by the Orsini of Vicovaro, a nearby town. They retained the castle until the XVIIth century when it was sold to the Nunez, a family of Spanish origin. In the XIXth century it was bought by the Del Gallo together with the nearby fiefdom of Roccagiovine. The new owners redesigned the castle and in 1877 they built S. Vincenzo Ferrer, a sort of private chapel where the Del Gallo are buried. (left) S. Vincenzo Ferrer: coat of arms of the Del Gallo (It. gallo; Engl. cock); (right-above) MR, symbol of the Marquis of Roccagiovine, on a house; (right-below) Roccagiovine seen from Mandela (the supposed site of Horace's villa is nearby)

We proceeded and to the left, on the brow of a craggy steep we perceived the Fanum Vacunae, whence the poet dated one of his philosophic epistles; it was almost in ruins in his time and probably sunk under the pressure of age not long after; a village has risen upon its site, and assumed the name of Rocca Giovane. (..) About a mile and a half beyond the road which leads to Rocca Giovane we turned up a pathway, and crossing a vineyard found ourselves on the spot where Horace's villa is supposed to have stood. Eustace
In 1847 Marquis Alessandro del Gallo di Roccagiovine married Julie Bonaparte (full name: Julie Charlotte Zenaide Pauline Letizia Desirée Bartolomée), granddaughter of Lucien Bonaparte, Prince of Canino and brother of Emperor Napoleon I. In Rome they lived in a palace in Piazza Farnese, but at Mandela Julie Bonaparte held a literary salon. 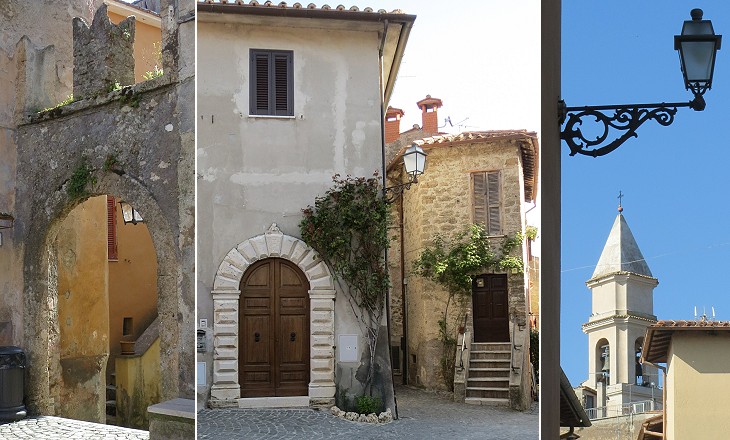 Views of the old part of Mandela

Today Mandela is within easy reach from Rome via rail and highway. Many new apartment blocks have been built near the railway station and the highway entrance, but the inhabitants of the old settlement at the top of the hill enjoy a quiet way of life in picturesque surroundings. On the top of a rock stands tbe Franciscan convent of St Cosimato a neat and oonvenient building with a very clean church. Hither we repaired, in order to take shelter from a very heavy shower, and were received by the good fathers with cordiality, and treated in a very hospitable and polite manner. Eustace
The foundation of this monastery on a rock almost surrounded by the River Aniene is attributed to Charlemagne, but it most likely occurred in the late IXth century when the Saracens raided the Italian shores and did not hesitate to move inland. The monastery was a sort of small fortress which controlled the road to Rome (you may wish to see it in a famous painting by Joseph Wright of Derby - it opens in another window). 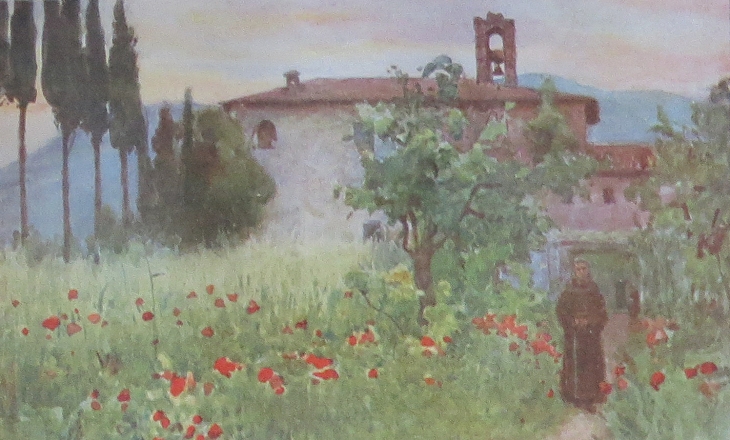 The garden of S. Cosimato seen by Alberto Pisa in ca 1905. This painting is one of a series commissioned to illustrate a Black's Beautiful Book. You may wish to see other paintings by Pisa in this website

S. Cosimato was granted several possessions, including Sambuci, but in 1081 it was assigned to the monks of S. Paolo fuori le Mura. In the following centuries it was given to other religious orders, repeatedly abandoned and eventually turned into a hospital until it became a Franciscan monastery. Today S. Cosimato is no longer a monastery. It provides accommodation to groups of pilgrims and it can host weddings and banquets. 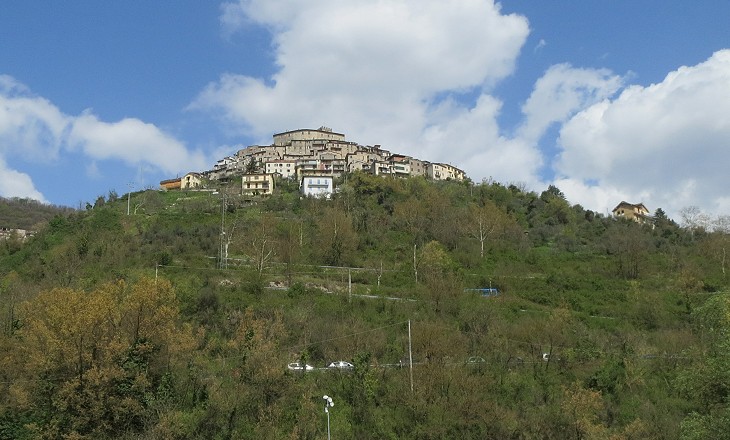 Roviano is another small town built on a hill near the River Aniene to control the road to Rome. The first record about Roviano is dated 867 and the small town is listed among the possessions of the Abbots of Subiaco. At the beginning of the XIIIth century it was acquired by a minor branch of the Colonna family. It continued to belong to the Colonna with minor interruptions until 1872 when the castle at the top of the town was sold to the Massimo of Arsoli. 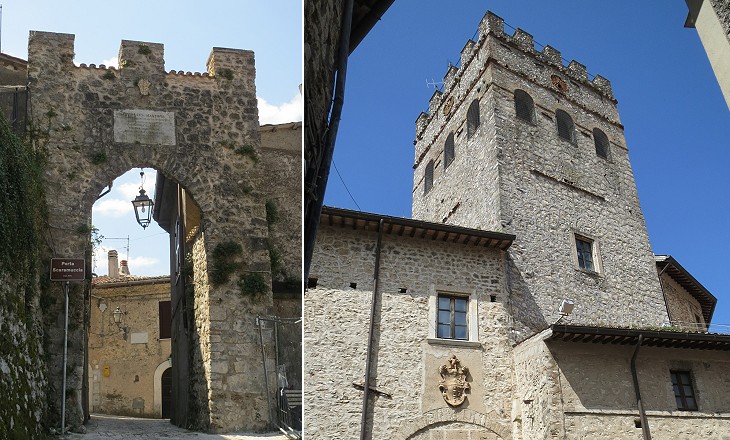 (left) Porta Scaramuccia (below) Tower of Palazzo Baronale or Brancaccio

The very medieval aspect of some corners of Roviano is due to the initiative of Prince Camillo Massimo. Porta Scaramuccia and the battlements of the castle were built in 1880. Because of legal quarrels between the Prince and the citizens of Roviano in 1902 the Massimo decided to sell their properties to the Brancaccio, who had already turned a Colonna fortress into a pretty medieval castle at S. Gregorio di Sassola. In 1979 the property was sold to the City of Roviano. 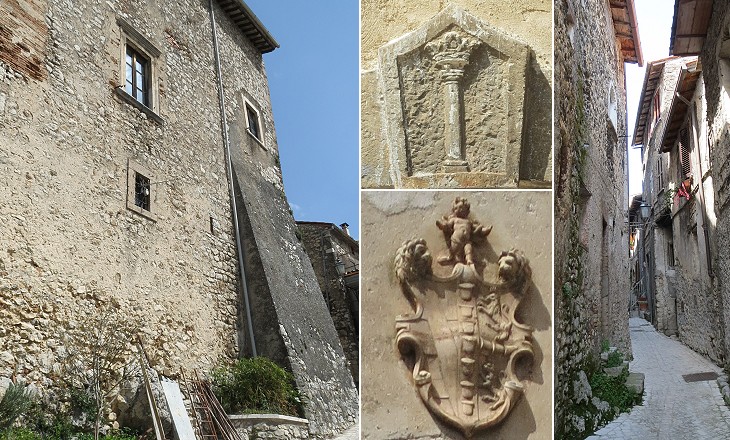 (left) Palazzo Baronale (today the building houses a small museum on local farming practices); (centre) coats of arms of the Colonna (above) and of the Massimo (below); (right) a street near Palazzo Baronale

Even though the references to the Massimo are modern, the narrow streets near the castle retain a flavour of medieval Roviano. 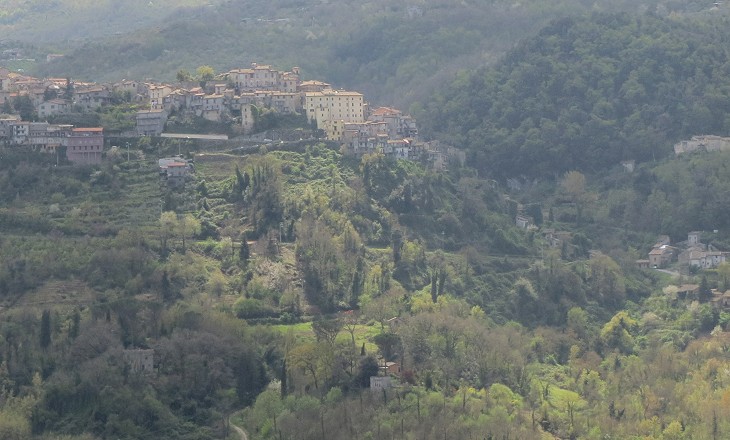 The image used as background for this page shows a Colonna coat of arms at Roviano.