For an introduction to Maremma you may wish to read page one first. 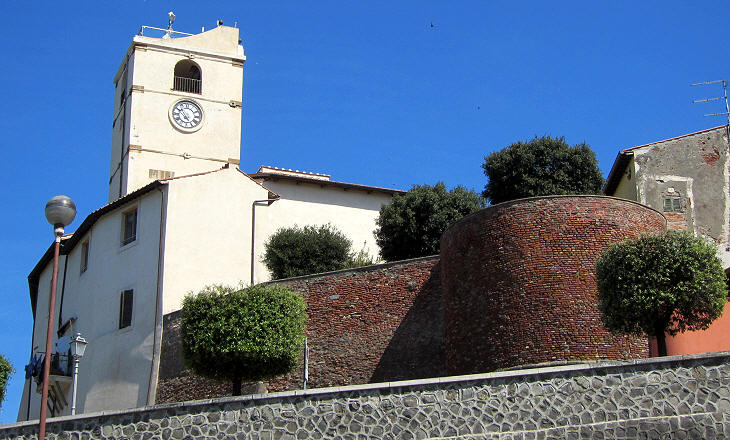 Walls and tower of Palazzo Comunale

Montalto is a small town on a hill overlooking the coast (Montalto means tall mountain, although the hill is just 138 ft high). It is called Montalto di Castro with reference to the Duchy of Castro of which it was part between 1537 and 1649. 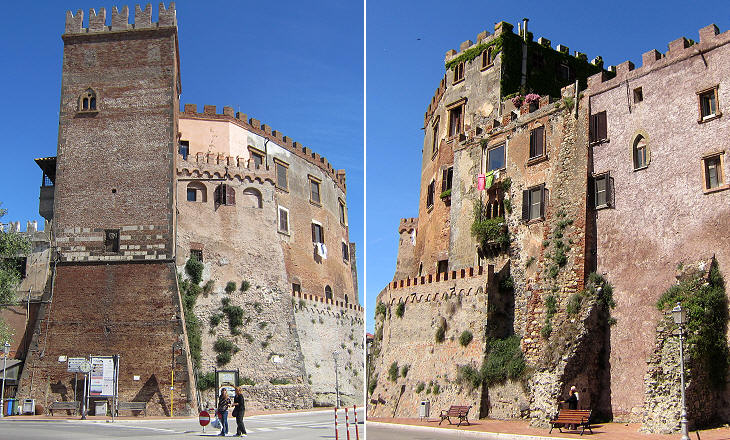 Castello Guglielmi: views from outside Montalto

The entrance to the town is dominated by Castello Guglielmi, a medieval castle built by the Orsini upon the walls of the town. In the XIXth century it was bought by the Guglielmi, a rich family of landowners from Civitavecchia who added several windows and placed battlements everywhere. Those at the top of the old tower have Ghibelline merlons, the others have Guelph merlons. 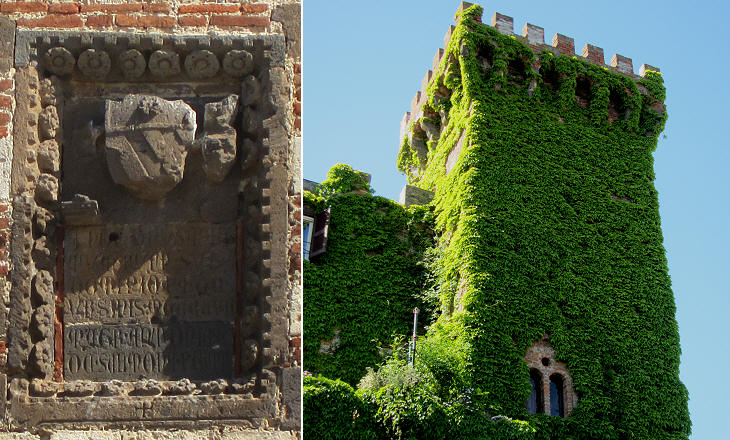 Castello Guglielmi: (left) 1407 coat of arms and inscription of Paolo Orsini; (right) XIXth century tower on the internal side

Montalto is located along Via Aurelia, the ancient Roman road which led to France. Although in the Middle Ages Via Aurelia lost most of its importance in favour of Via Francigena, the overlords who competed for supremacy in northern Latium repeatedly fought for the possession of Montalto. Towards the end of the XIVth century the Orsini added the town to their other fiefdoms along Via Aurelia. 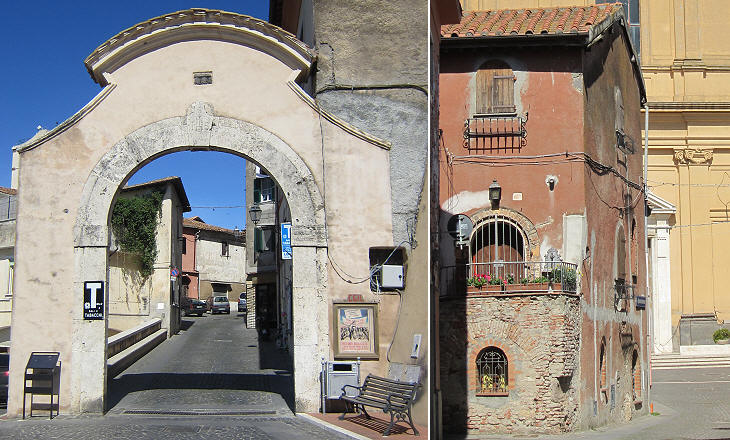 In 1535 Pope Paul III assigned Montalto to his son Pier Luigi Farnese who had married Gerolama Orsini, who brought him some family fiefdoms in the region. Two years later the town was included in the Duchy of Castro. Unlike other towns of the Duchy which were embellished with palaces and fountains, Montalto was rather neglected by the Farnese. 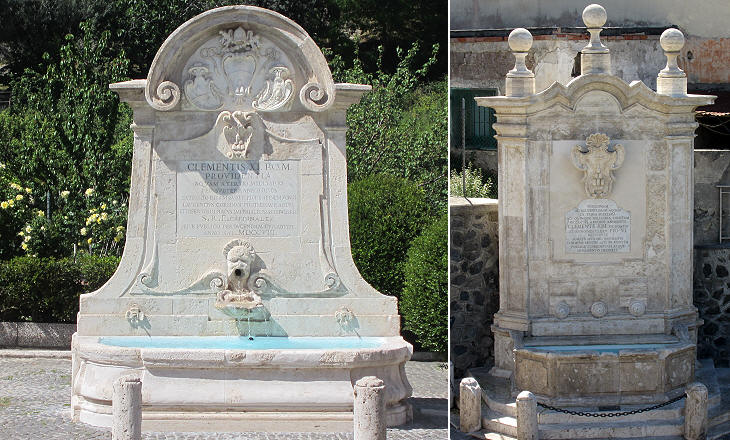 According to an old saying: "Dell'Italia il Papa ha la ciccia e il Granduca l'ossa" (the Pope has the meat of Italy and the Grand Duke of Tuscany has the bones): it meant that the land of the Papal State was by far more fertile than that of Tuscany (which had many more mountains). But in the XVIIIth century the saying was no longer true. Towards the end of the XVIth century the Grand Dukes of Tuscany realized that the fortunes of their family (the Medici) could no longer rely on trade and banking because the discovery of America and other factors had changed the economic environment which had supported the growth of Italy until then. They therefore turned their attention to agriculture and through various means they developed it. Their villas are decorated with frescoes and oil paintings showing new varieties of apples, peaches and pumpkins. This continued effort made Tuscany a very well farmed land. Even unhealthy Maremma was in part reclaimed by digging channels which drained the marshes. Travellers were struck by the change they noticed in the rural landscape when they crossed the border between Tuscany and the Papal State.
In the XVIIIth century the popes tried to emulate their neighbours and Montalto retains some memories of these efforts. An aqueduct brought fresh water to the town and two fine fountains were built to celebrate the event and a major restoration of the aqueduct. 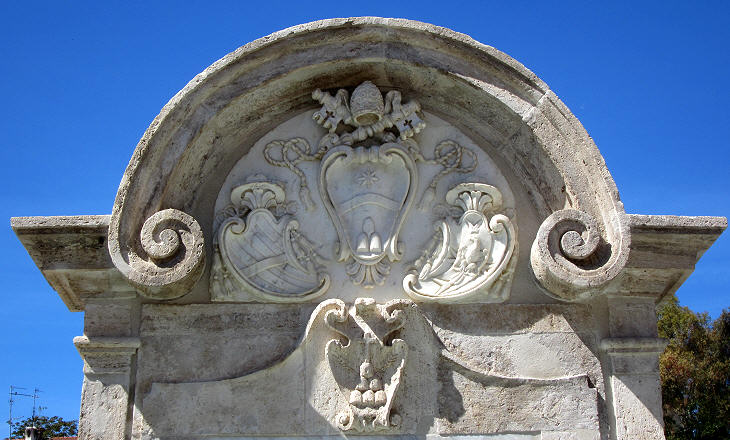 Coats of arms on the 1708 fountain 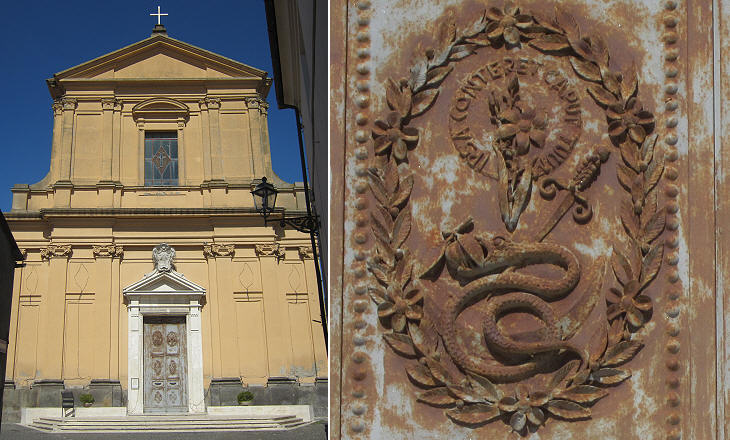 S. Maria Assunta was built by Pope Pius VI in 1783 on the site of a previous church. The door has an elaborate bronze relief with an inscription (Ipsa conteret caput tuum - Genesis 3:15 - She shall bruise your head) which Pope Pius IX quoted as the first biblical reference to the Virgin Mary in the documentation supporting the dogma of the Immaculate Conception in 1854. Today there is a general consensus that ipsa/she should be replaced by ipsum/he or it. 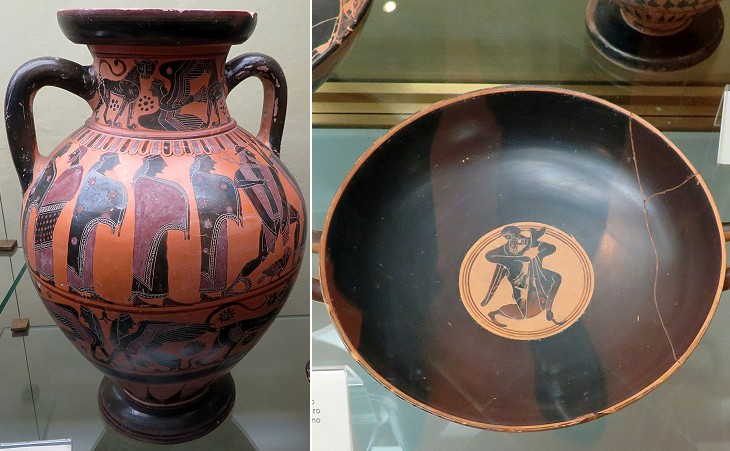 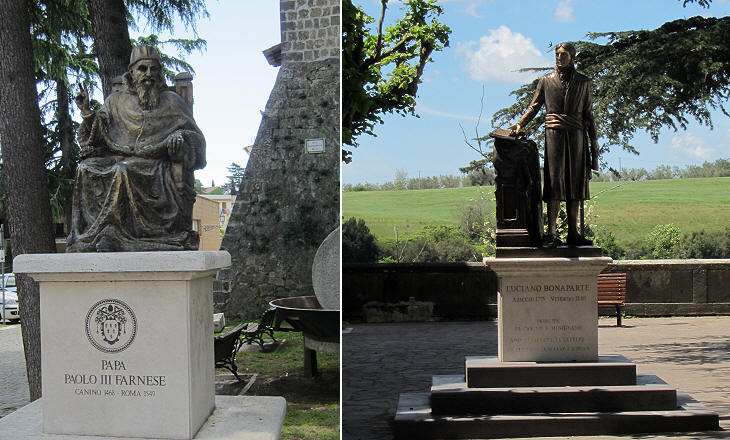 Canino has dedicated modern statues to the two men who did most for its development: Pope Paul III who was born at Canino and Lucien Bonaparte, brother of Napoleon, who spent many years at Canino where he promoted the excavations of the nearby Etruscan town of Vulci. In 1814 Pope Pius VII gave him the title of Prince of Canino. 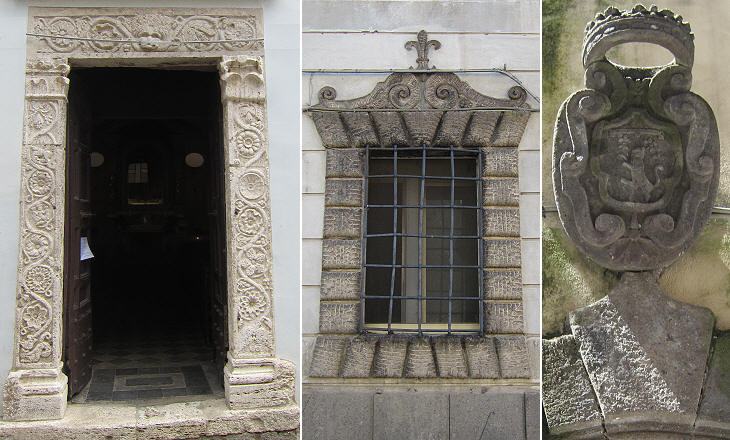 (left) Portal of S. Croce; (centre) window with the Farnese fleur-de-lys; (right) coat of arms of Canino as part of the Duchy of Castro which depicts a small dog as this is the Italian meaning of "canino"

Apart from the portal of S. Croce, Canino does not retain interesting monuments of its medieval past. The small castle which protected the town and where Pope Paul III was born was largely modified by Lucien Bonaparte. Here and there one can see the Farnese fleurs-de-lys. The image used as background for this page shows the Farnese coat of arms on an entrance to the old castle. 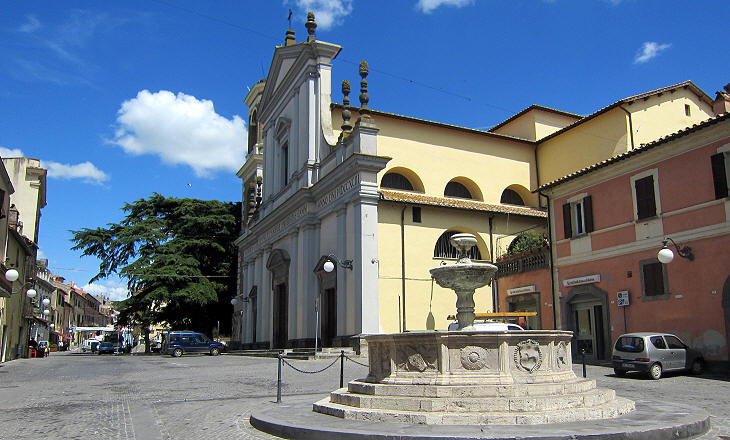 The urban layout of Canino is characterized by a very long main street which was enlarged in the XXth century by pulling down rows of old buildings. A fountain which is attributed to il Vignola was relocated in the large square in front of the Collegiata which was built in 1783-1793 on the site of an older church. 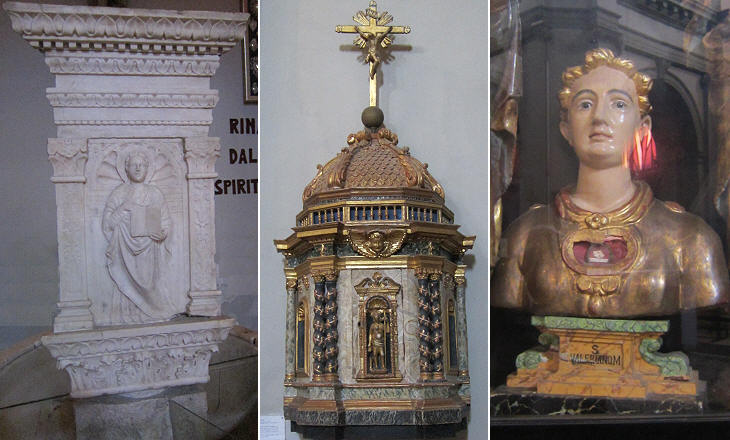 The Collegiata houses some interesting artefacts from the old church or from churches which were pulled down or deconsecrated. 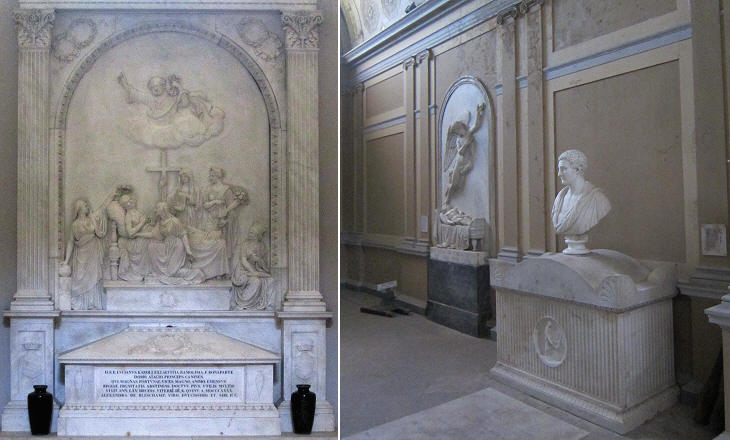 In 1854 Alexandrine de Bleschamp, widow of Lucien Bonaparte, was allowed to turn the chapel to the right side of the main altar into a funerary chapel for her family. Alexandrine de Bleschamp was the second wife of Lucien Bonaparte who decided to marry her despite the opposition of his brother Napoleon. Lucien Louis Joseph Napoleon Bonaparte, 4th Prince of Canino was created cardinal in 1868 by Pope Pius IX. He promoted a restoration of S. Pudenziana in Rome. 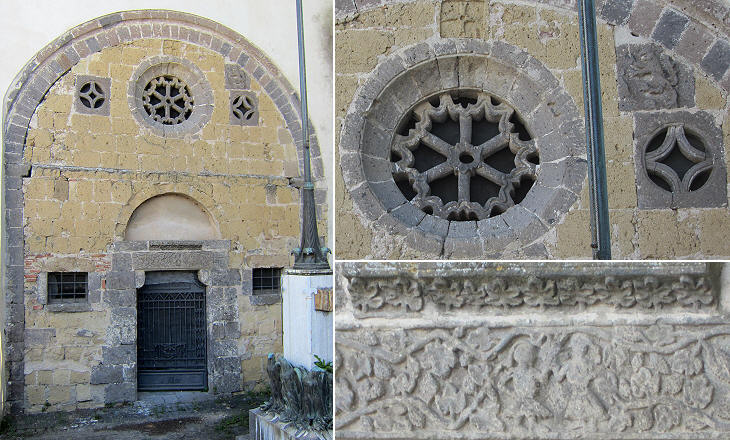 Cappella dell'Annunziata and details of its façade

This small chapel is located outside Canino along the road leading to Valentano. It was built in the XIIIth century but its size was reduced to make room for a Franciscan monastery. Similar to other churches and palaces of the region, its decoration is based on the use of dark volcanic stones. The lintel was most likely an ancient sarcophagus with a scene of a grape harvest.

The monastery is arranged around a very large courtyard decorated with frescoes depicting episodes of the life of St. Anthony. The interior of the church houses several interesting paintings including a fresco by il Pastura, a painter from Viterbo who fell into oblivion after his death in ca 1516, but whose works attracted the attention of art experts at the beginning of the XXth century. 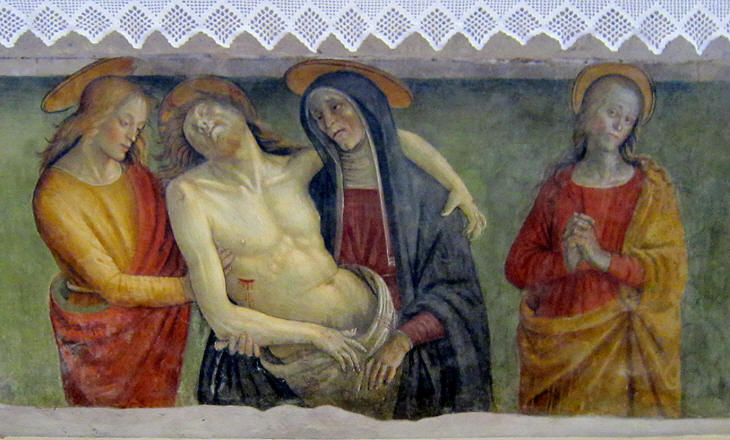 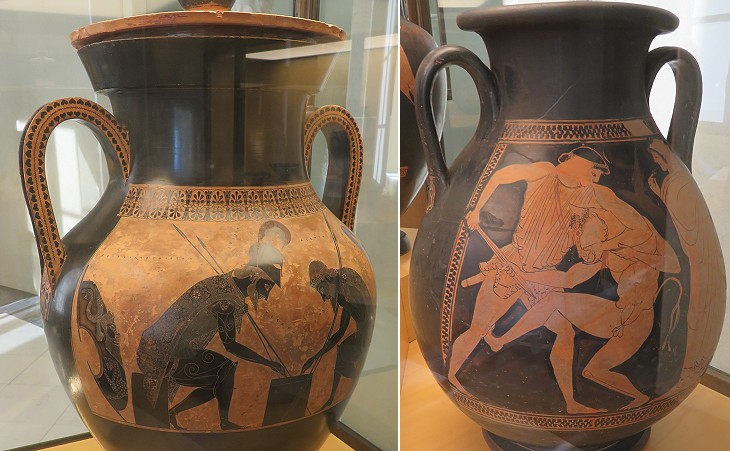 Musei Vaticani - Museo Gregoriano Etrusco: two vases found at Vulci and portraying (left) Achilles and Ajax playing dice (by Exekias - see other vases by him at Orvieto) and (right) Theseus killing the Minotaur

In 1837 Pope Gregory XVI founded Museo Gregoriano Etrusco to house the papal collection of Etruscan works of art. It includes a large number of vases from Vulci. 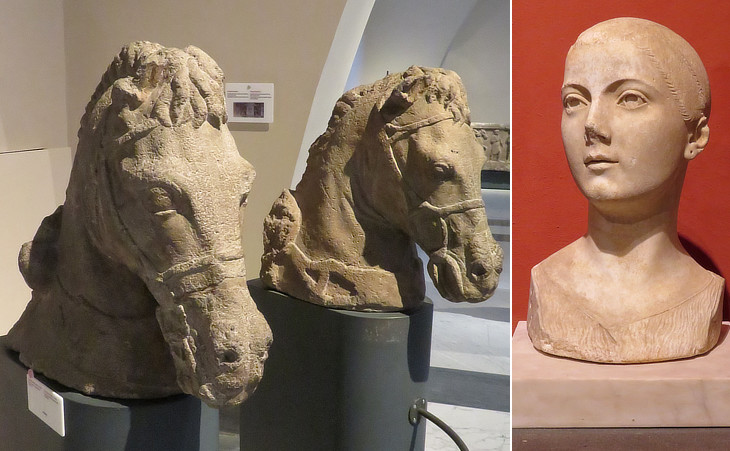 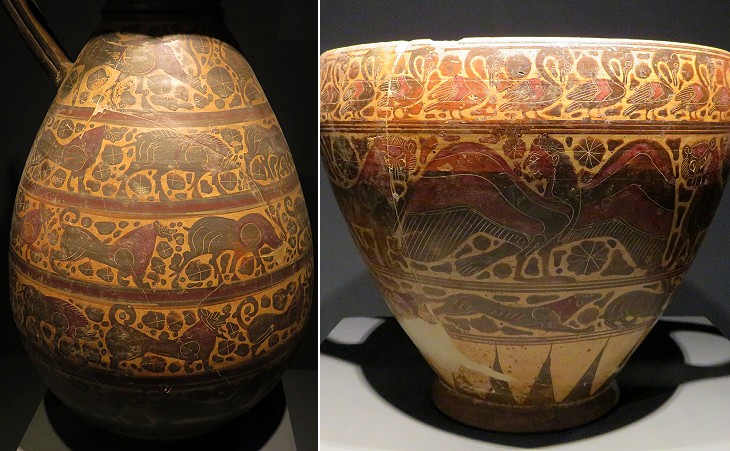