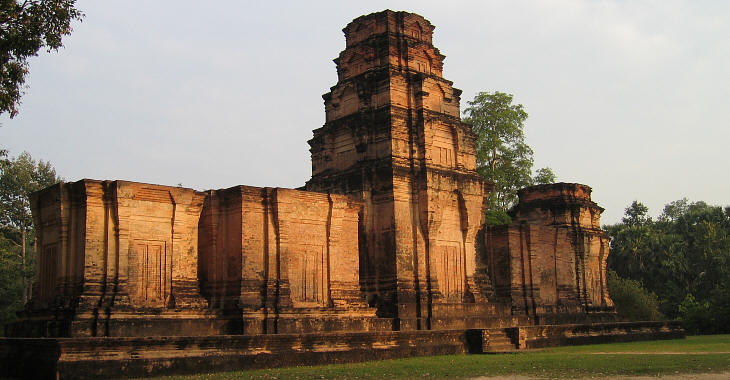 Prasat Kravan is one of the oldest monuments of Angkor. It is thought to have been built in 921 by Mahidharavarman, a high officer at the royal court. It consists of five small temples placed in a row above a slightly raised platform: this design is unique in Angkor. It was dedicated to Vishnu.

Central temple and reliefs inside it

The temples show a skilled use of brickwork to design pillars and lintels without coloured stones (similar to some Roman buildings, e.g. Sepolcro di Annia Regilla): unlike the monuments which came after, the decoration is inside the buildings, even though these can accommodate only a few persons at the same time: narrative bas-reliefs portray aspects (central temple) of the life of Vishnu and (far right temple) of his wife Lakshmi (or rather Vishnu in the feminine role of creator).

Reliefs inside the far right temple

Phnom Bakheng is located at the top of a hill

A temple has been erected on the top of Mount Bakheng, which is situated two miles and a half north of Ongcor-Wat, on the road leading to the town. (..) Steps, partly destroyed, lead to the top of the mountain, whence is to be enjoyed a view so beautiful and extensive, that it is not surprising that these people, who have shown so much taste in their buildings, should have chosen it for a site. (..) The centre of the terrace formed by the last story is only a confused mass of ruins from the fallen towers.
Henri Mouhout - Travels in the central parts of Indo-China (Siam), Cambodia, and Laos: during the years 1858, 1859, and 1860 - 1864
The reason for the popularity of Phnom Bakheng lies in its being built atop a hill at the centre of the archaeological area.

On the one side you gaze upon the wooded plain and the pyramidal temple of Ongcor, with its rich colonnades, the mountain of Crome, which is beyond the new city, the view losing itself in the waters of the great lake on the horizon. On the opposite side stretches the long chain of mountains whose quarries, they say, furnished the beautiful stone used for the temples; and amidst thick forests, which extend along the base, is a pretty, small lake, which looks like a blue ribbon on a carpet of verdure. All this region is now as lonely and deserted as formerly it must have been full of life and cheerfulness; and the howling of wild animals, and the cries of a few birds, alone disturb the solitude. Mouhout
According to literature at sunset the light for viewing Angkor Vat should be perfect: however considering that even in the dry season there is a lot of humidity I doubt the view is often much better than that shown in the image above (taken at sunset on a late November day).

Angkor is not just for tourists

Judging from the details of the work, and the state of the stone, which in many places crumbles at a touch, this building belongs to a period much anterior to that of many of the other monuments. Mouhout
Climbing up the steep stairs of Phnom Bakheng at sunset is a must for the visitors of Angkor: it is also very dangerous for the people who do it and for the monument itself. The ancient stones show many signs of being worn out. The temple was dedicated to Shiva and, in line with the Hindu tradition, a statue of Nandi, the bull which Shiva rides, was placed at the entrance of the shrine. Women visit images of Nandi, bringing floral offerings, and touch the stone. Their prayers are for fertility.

In a word, the temple of Mount Bakheng appears to have been the prelude to civilization, while that of Ongcor-Wat was probably its climax. Mouhout
Phnom Bakheng was built at the end of the IXth century when the Khmer Empire was at the beginning of its expansion and yet the decoration is very elaborate and mature: this is regarded as evidence of close links with India.
The image used as background for this page shows a detail of a Naga at Ta Proum.