I shall commence with the temple of Ongcor, the most beautiful and best preserved of all the remains, and which is also the first which presents itself to the eye of the traveller, making him forget all the fatigues of the journey, filling him with admiration and delight, such as would be experienced on finding a verdant oasis in the sandy desert. Suddenly, and as if by enchantment, he seems to be transported from barbarism to civilisation, from profound darkness to light.
Henri Mouhout - Travels in the central parts of Indo-China (Siam), Cambodia, and Laos: during the years 1858, 1859, and 1860 - 1864
Angkor Vat is the most celebrated monument of Cambodia, the symbol of the country's glorious past (it appears on the national flag).

A causeway 230 metres in length by 9 in width, covered or paved with large slabs of stone, and supported by walls of great thickness, crosses a ditch 220 metres wide, which surrounds the building; the revetment is formed of ferruginous stone. Mouhout
Angkor Vat was built in 1130-50 by King Suryavarman II. It was dedicated to Vishnu; unlike most temples it faces west rather than east; this is most likely due to a very practical reason: the city was located to its west. It is surrounded by a very large moat or rather a water reservoir which adds to the beauty of the site. 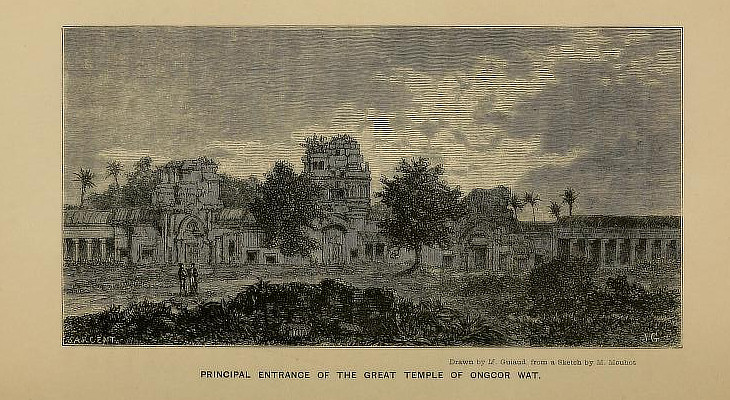 Principal Entrance. - The edifice forms a long gallery with a central tower, and two others, of rather less altitude, about 30 metres distant from the former. The portico of each tower is formed of four projecting columns, with a staircase. At each extremity are similar porticoes, beyond which, but immediately contiguous thereto, is a high door or gateway, on the same level, which serves for the passage of vehicles. Mouhout

This imposing colonnade, which, from its great length and beautiful proportions, attracts the attention from a distance, forms a fitting entrance to the great monument. Mouhout
Behind the principal entrance one can see the main structure of the temple with five towers arranged according to a scheme typical of Angkor (similar to the dots of number five on dice).

A faithful warden and the main gopura

At each angle are two enormous lions, sculptured out of the rock, and forming, with the pedestals, only a single block. Mouhout 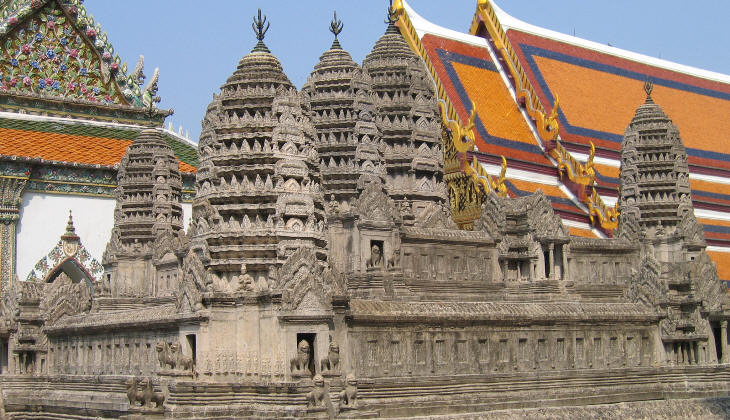 A model of Angkor Vat in the Royal Palace of Bangkok

The temple is formed of three distinct parts raised in the form of terraces one above the other. There are three flights of steps, upon each of which are four lions reclining upon their pedestals. (..) The stones are everywhere fitted together in so perfect a manner that you can scarcely see where are the joinings; there is neither sign of mortar nor mark of the chisel, the surface being as polished as marble. Was this incomparable edifice the work of a single genius, who conceived the idea, and watched over the execution of it? One is tempted to think so; for no part of it is deficient, faulty, or inconsistent. Mouhout
In the XIXth century the region of Angkor belonged to Thailand and the kings of that country built a model of the main temple in the precinct of their Bangkok palace. It helps in understanding the overall design of Angkor Vat.

The building forms a square, each side of which is 56 metres, and at each angle is a tower. A central tower, larger and higher, is connected with the lateral galleries by colonnades covered, like the galleries, with a double roof. Mouhout
One key feature of Angkor in general is the vertical thrust of its buildings: this aspect was no doubt due to religious and artistic motives: however also the fact that Khmer architects did not make use of the arch had some influence in their design.
Openings were closed by adding layers of stones on either side of them, with each successive layer projecting more from the wall: this construction technique (called corbel arch) did not allow the construction of large vaults and halls and it made the buildings particularly prone to collapse. You may wish to see corbelled vaults in ancient Greek cities e.g. Tiryns.

The basement, like that of the whole building, is ornamented with very beautiful sculptured cornices, varied in style, and entirely covered with delicate carvings representing roses and arabesques, worked with the chisel, with a taste and skill equally wonderful. (..) Some walls have imitation windows with twisted bars. Mouhout
The decoration of Angkor Vat is extremely elaborate and when the walls were not covered by bas-reliefs, they were given the appearance of a silk tapestry; blind windows closed with small columns made the overall design of the buildings more lively.

All the mouldings, sculptures, and bas-reliefs appear to have been executed after the erection of the building. Mouhout
The bas-reliefs of Angkor Vat are regarded as the highest point reached by Khmer artists.

Here are found two pavilions of extremely elegant architecture, with porticoes and staircases at each end. (..) The columns are square, and, like all other buildings in the province, are formed of single blocks. Mouhout
The two "libraries" of Angkor Vat have a design which is somewhat similar to patterns developed in ancient Greece with pronaoi (porticoes at the front of temples) and a more balanced ratio between height and width. 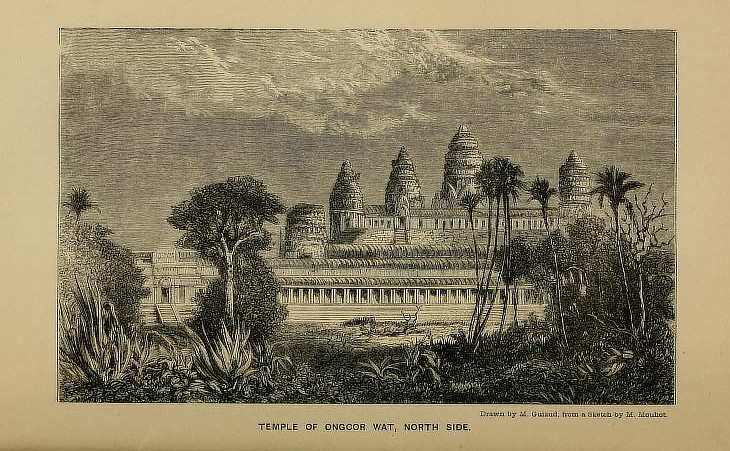 Each portico is composed of three roofs raised one above the other, which contribute materially to give to the architecture of these long galleries a monumental appearance, producing a singularly beautiful effect. Mouhout 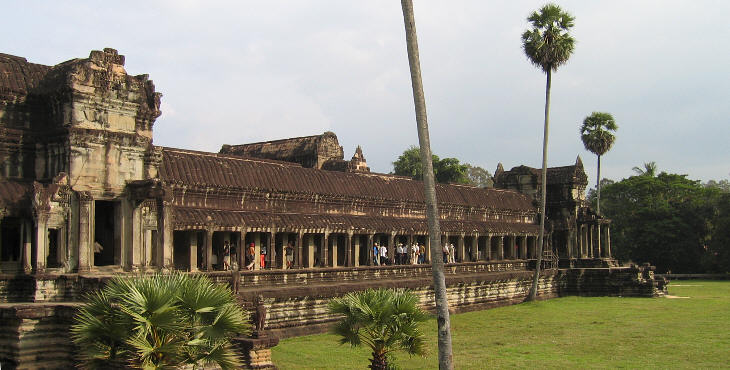 One of the porticoes

The quadrangular porticoes surrounding the five towers were decorated with narrative bas-reliefs depicting military processions and the Hindu myth of Mount Meru.

The soldiers are armed with bows, javelins, or sabres, but the apes have generally no weapons except their formidable claws. Mouhout

A sort of war dance