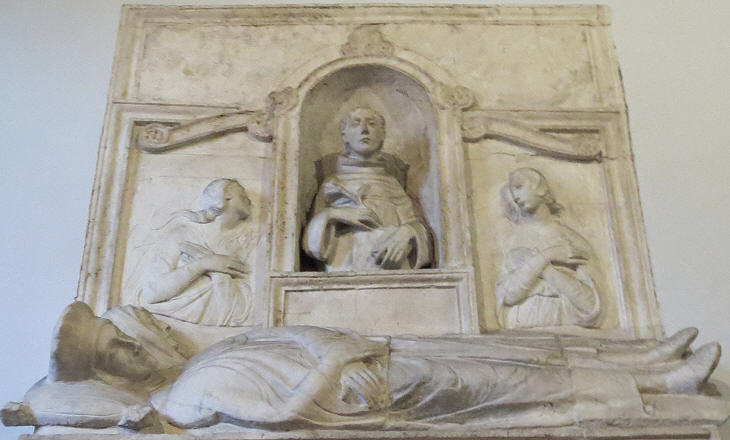 Pope Sixtus IV made his entrance in Amelia on July 1, 1476. He spent twenty days in the palace of the Geraldini, a prominent family of the town. His journey was motivated by an epidemic of cholera in Rome. According to a celebratory inscription the Geraldini placed on the façade of their palace, the Pope greatly enjoyed his stay. They were probably rewarded for their hospitality because in the years following the visit they built a series of elegant (and expensive) funerary monuments in a chapel of the church near their home. 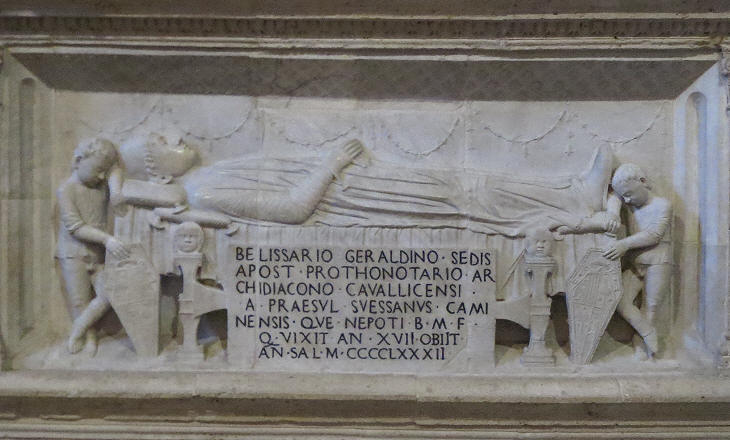 The monuments have been attributed to pupils of Agostino di Duccio, a Florentine sculptor who worked on the decoration of Tempio Malatestiano at Rimini and to pupils of Andrea Bregno, a sculptor from northern Italy who settled in Rome where he worked at the decoration of Palazzo della Cancelleria and S. Maria del Popolo. In the monument to Belisario Geraldini it is interesting to note the two side doors which increase the depth of the relief and the two weeping children who recall the putti of many ancient sarcophagi and who can be seen in other funerary monuments of the same period (e.g. the Monument to Pope Adrian VI). 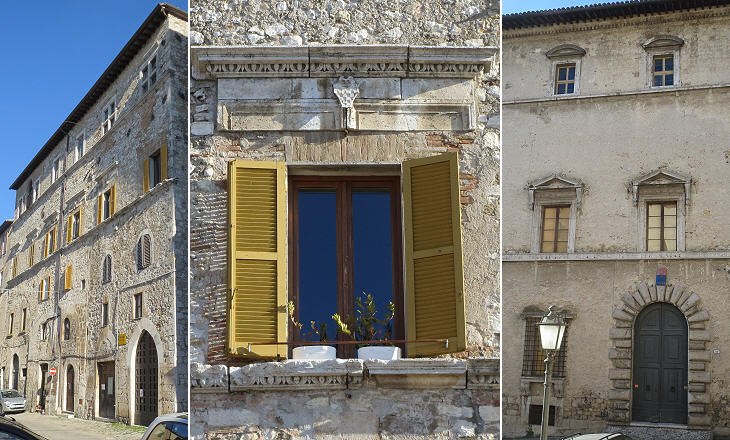 Palazzo Nacci is an interesting example of the passage from medieval to Renaissance architecture. The medieval building was enlarged by adding two floors which had large windows similar to those designed for Palazzo Venezia in Rome in the second half of the XVth century (they were eventually reduced in size, but the marble frames show their original aspect).
Palazzo Farrattini was designed in the first half of the following century by Antonio da Sangallo the Younger who by designing Palazzo Farnese set the standard for the Roman Renaissance palaces to come. The Farrattini had a family chapel in the Cathedral which was spared by the fire that damaged the building in 1629. The image used as background for this page shows a bust in that chapel. 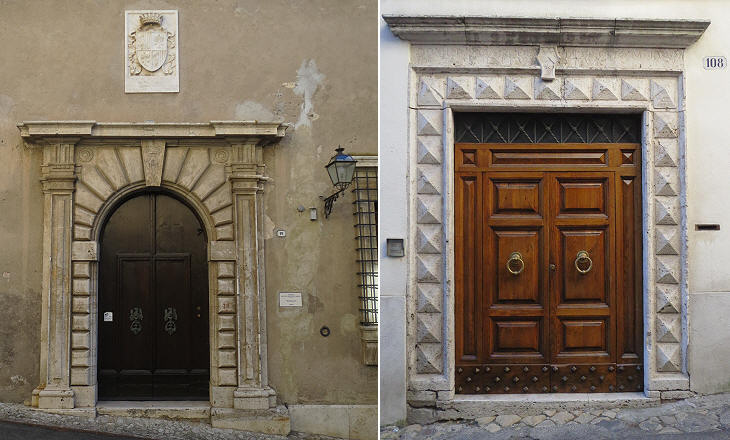 The narrowness of most streets of Amelia is such that it is very difficult to take a photo of a whole building and therefore one must concentrate on details such as portals and windows. The inscription on the portal in the right image will sound familiar to students from Oxford as it is written on the steps leading to the Oxford University Church of St. Mary the Virgin. 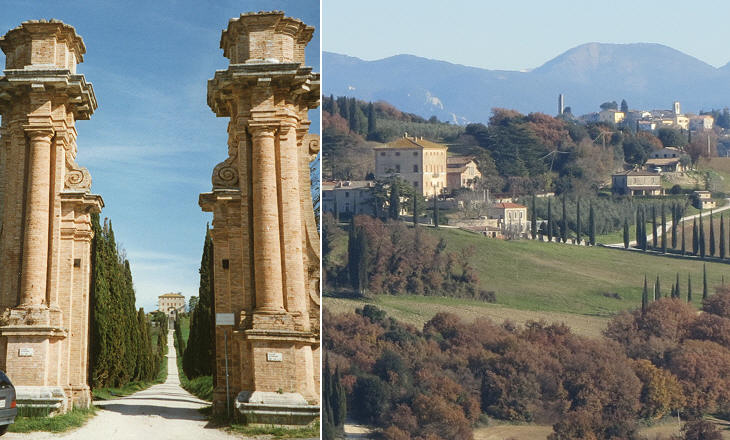 Antonio da Sangallo the Younger is attributed the design of this villa, but the long alley and the imposing gate were built in the XVIIIth century. The cypresses are rather young. These trees in most parts of Italy are associated with cemeteries, but in Tuscany and Umbria they are planted for decorative purposes and as windbreakers. 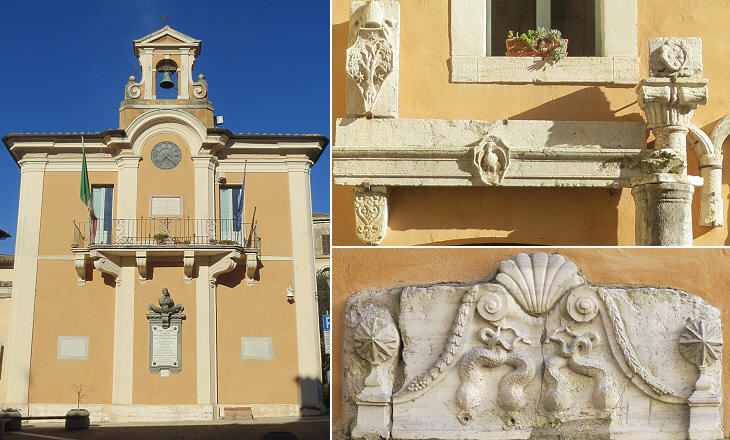 In the XVIIIth century the medieval Town Hall at the top of the town was replaced by a rather small building. Parts of the previous building, coats of arms of bishops of the town and other historical material are displayed in a rather haphazard manner in the garden leading to the entrance. 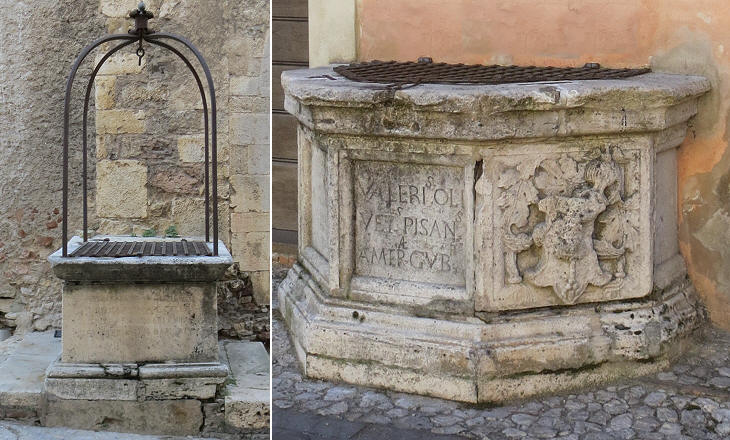 Wells above a series of large ancient cisterns near Palazzo Comunale

The square where Palazzo Comunale is situated houses two wells, one of which is made up with parts of different origin; the coat of arms most likely belongs to the Cesi, who were Dukes of Acquasparta, a town north-east of Amelia; the inscription mentions a governor of the town, but it does not make any references to the well. 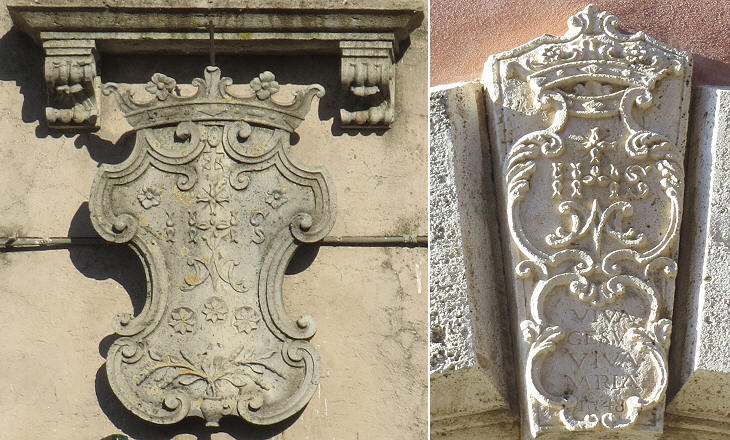