Sant'Eusebio
(Vasi at work in the Grand View of Rome) 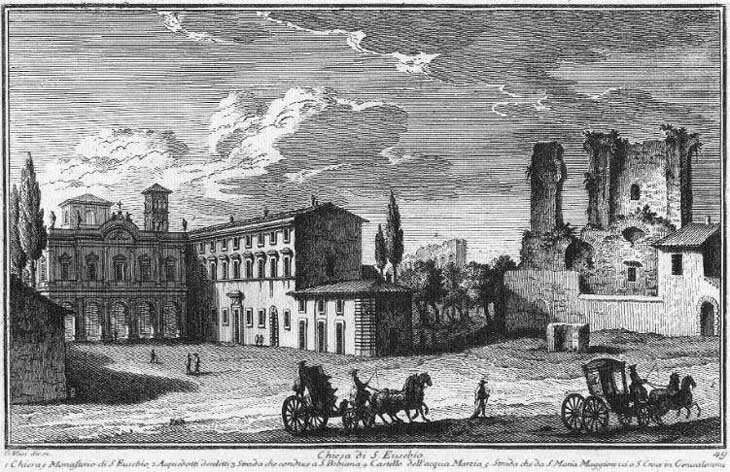 Vasi entitled his books of etchings "The Wonders of Ancient and Modern Rome"; this view which shows S. Eusebio, a church that was redesigned in the XVIIIth century next to the imposing ruins of an ancient monumental fountain, could have been used as a cover for the books, although not many pilgrims or Grand Tour travellers spent time to visit the location. A detail of the etching is shown in the image used as background for this page.
The view is taken from the green dot in the map below. In the description below the plate Vasi made reference to: 1) Chiesa e Monasterio di S. Eusebio; 2) Derelict aqueducts (Aqua Iulia); 3) Street leading to S. Bibiana; 4) Castello dell'Acqua Marcia (Trofei di Mario); 5) Street leading from S. Maria Maggiore to S. Croce in Gerusalemme. The small 1748 map shows also 6) Chiesa di S. Giuliano. From this map one can see that at Vasi's time S. Eusebio, which is situated on the Esquiline Hill, was at the edge of the populated part of Rome. 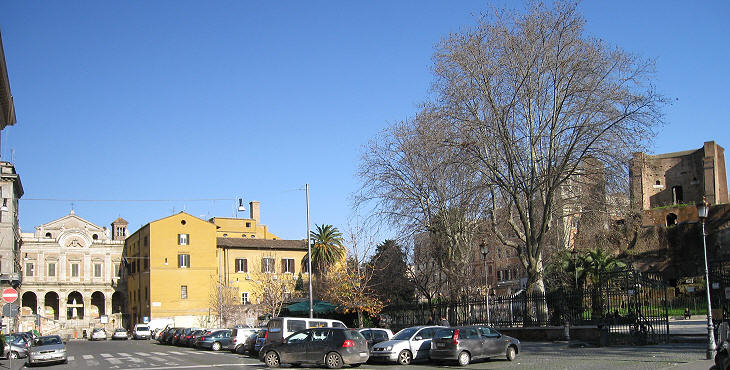 After the 1870 annexation of Rome to the Kingdom of Italy, the area around S. Eusebio was chosen for a new large development in stile torinese, i.e. a chequered net of streets flanked by large buildings with porticoes and shops, which in Italy was typical of Turin. The main square of the new neighbourhood was dedicated to King Victor Emmanuel II; its garden includes the ancient ruins. In recent years the square has become the heart of Multi-ethnic Rome (the page shows some of the XIXth century buildings surrounding the square).
The church of S. Giuliano ai Monti which was located opposite S. Eusebio was pulled down in 1874 in the frame of the general redesign of the area.

In 313 Emperor Constantine issued an Edict of Tolerance which put an end to the persecution of Christians, but not to the list of martyrs. Eusebius was a Roman priest who promoted full adherence to the Nicene Creed and because of this he was sentenced to starve to death in his home by Emperor Constantius II, a supporter of the Arian heresy.
The very ancient church which stood on Eusebius' house was entirely rebuilt in the XIIIth century. In 1711 this second church (with the exception of the bell tower) was replaced by a new building designed by Carlo Stefano Fontana, a nephew of Carlo Fontana, the leading architect in late XVIIth century Rome (you may wish to see the building as it appeared in a 1588 Guide to Rome). 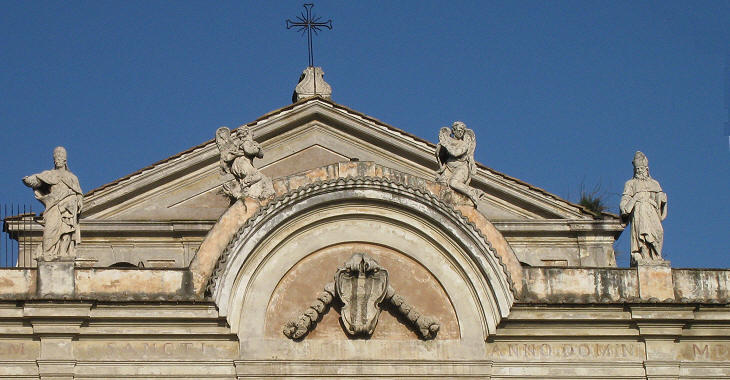 The coat of arms is greatly damaged and it is difficult to see the mountains and the star of Pope Clement XI. The monastery which adjoined the church was confiscated in 1873 and today it houses a police station. 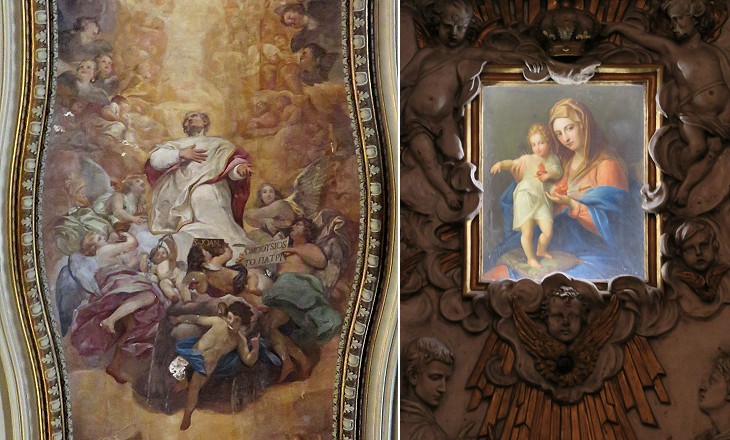 (left) Glory of St. Eusebius by Anton Raphael Mengs, painting on the ceiling; (right) Madonna and Child holding the Sacred Heart on the main altar which is attributed to Pompeo Batoni because it resembles a very famous painting by this artist

The interior of the church contains a painting by Anton Raphael Mengs, a German artist who was highly regarded by Johann Joachim Winckelmann, one of the fathers of Neoclassicism. It does not depart from many other Roman illusionistic ceilings from a conceptual point of view, but it lacks their complexity, which at Mengs' time had begun to be regarded as excessive.

Details: (upper left corner) inscription celebrating the consecration of the church in 1238 by Pope Gregory IX. Those who visited the church during Easter were granted 1,000 years and 120 days of indulgence, but the word ("millis") indicating the years was rewritten, so maybe Pope Gregory was not so open-handed and he granted two ("duis") years only; (upper right corner) detail of the stucco decoration; (below) 1759 stucco inscription and coat of arms of Cardinal Enrico Enriquez, titular of S. Eusebio, who bequeathed funds for the embellishment of the church (it brings to mind a spectacular similar inscription at S. Andrea al Quirinale)

On January 17, the Feast of St. Anthony the Great, the traditional blessing of the animals takes place in the square in front of the church. It used to be held at S. Antonio Abate, a nearby church. 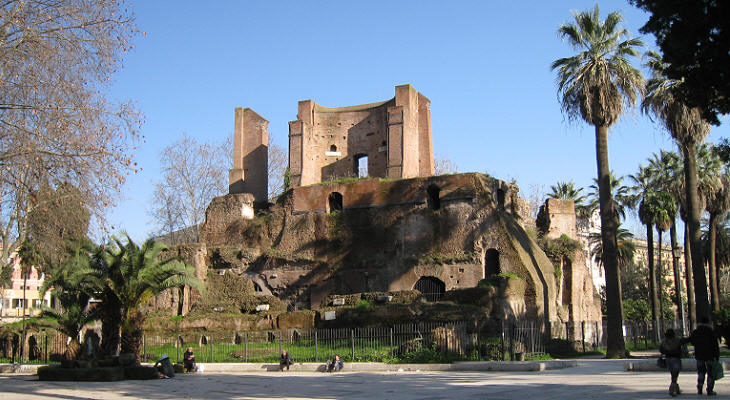 The imposing Roman ruins shown by Vasi in his etching were part of a nymphaeum (fountain) built at the time of Emperor Alexander Severus inside an imperial villa. It had a large central niche (probably housing a statue) flanked by two smaller ones which were decorated with the marble panoplies (sets of weapons) known as "Trophies of Marius" (actually dating back to the time of Emperor Domitian). In the late XVIth century the panoplies were moved to the balustrade of Piazza del Campidoglio.
This nymphaeum is said to have inspired baroque artists in designing the monumental fountains which celebrated new or restored aqueducts (Mostra dell'Acqua Felice, Mostra dell'Acqua Paola and Mostra dell'Acqua Vergine/Fontana di Trevi).

Aqua Iulia was an aqueduct built by Marcus Vipsanius Agrippa, son-in-law of Emperor Augustus, in 33 BC. It started near Frascati and it reached Rome at Porta S. Lorenzo where it joined other aqueducts. In the IIIrd century AD a short branch was built to supply water to the imperial villa. 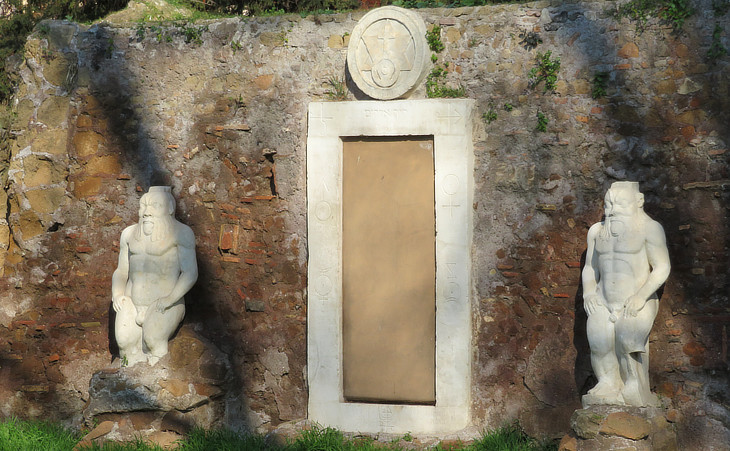 Porta Magica and enlargement of the relief above the door

The development of the eastern part of the Esquiline Hill in the late XIXth century led to the loss of many villas of the XVIth and XVIIth centuries, including Villa Montalto, Villa Altieri and Villa Palombara. Massimiliano II Savelli, Marquis of Palombara (1614-1685) was interested in alchemy and it is said that he received the formula of the philosopher's stone from a mysterious visitor. After several unsuccessful attempts to decipher it, he decided to share it by putting it, with many other alchemist symbols and puzzling sentences on a side door of his villa. The door was relocated to the gardens of Piazza Vittorio Emanuele II; the sentence containing the magic formula is:

The two statues at the sides of the door are a modern addition; they represent Bes, an Egyptian deity, and they belonged to a Temple to Serapis on the Quirinal Hill. A fine statue of Bes can be seen at Museo Barracco. 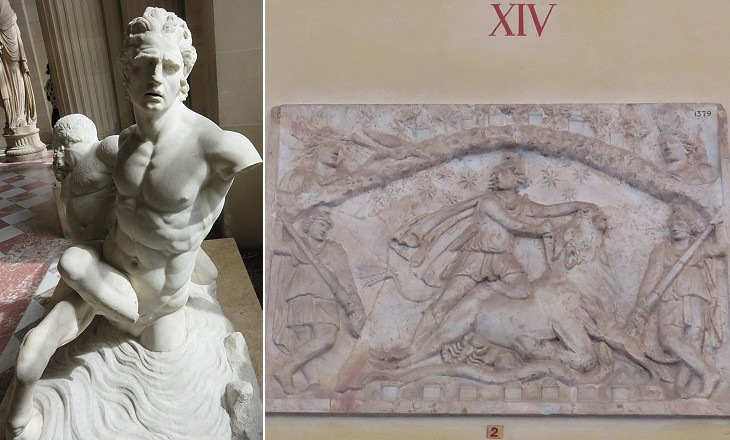 (left) Louvre Museum in Paris: statue of a sea centaur; it most likely decorated a fountain. It was donated by Prince (later on Cardinal) Alessandro Albani, nephew of Pope Clement XI, to King Louis XIV in 1712. Perhaps it was found during the redesign of S. Eusebio; (right) Musei Vaticani: relief from a mithraeum which was found on the Esquiline Hill in the early XIXth century

The Esquiline Hill was inside the walls built in 275 by Emperor Aurelian, but a large part of it was outside the Servian walls, the previous enclosure of ancient Rome, so it was not regarded as being in the city. Many wealthy citizens had suburban villas there, which were decorated with fountains and statues, the best known being Orti di Mecenate. From time to time chance excavations unearthed evidence of these villas and of their works of art. The finding of an ancient statue was a rather common event in Rome and beginning from the XVth century techniques were developed to reconstruct the broken ones and to complete them with their missing parts. The finding of an ancient painting was not as common and its transportation and conservation were not easy. A large fresco was discovered in 1604 near the lost church of S. Giuliano. It became famous for its subject which depicted scenes occurring after an ancient Roman wedding. It belonged to the Aldobrandini, the family of Pope Clement VIII, the reigning pope at the time of the discovery. It was so described by Jonathan Richardson the Younger in 1721:
The Marriage of Aldobrandini is an antique Fresco well known by the print of Pietro Sancto Bartoli. It is inserted in the Wall in the inside of a Summer-house. (..) The Figures are about a Foot'long; 'tis much hatch'd and the Outlines, and Folds of the Drapery not Always, or not Well determin'd, nor with a Beautiful Contour, but with a sort of Worminess disagreeable enough. As for the Colouring whatever it has been, 'tis Now so decay'd that no Beauty remains. (..) At a Distance the Clair-Obscure is Improved and the Airs are Fine, as are most of the Attitudes.
An Account of Some of the Statues, Bas-Reliefs, Drawings, and Pictures in Italy in 1722.
In 1818 it was bought by Pope Pius VII for the Vatican Museums. In line with the practice of the time it was largely restored and treated as an oil painting: it was placed in a gilded frame and protected with a glass (similar to what occurred to frescoes which were found at Ostia).
The central scene shows bare-breasted Venus talking to the bride (who still wears the wedding veil) to tell her what marriage is about; they sit on the bridal bed. A young man is waiting outside the room; he is usually identified with Hymen, God of Marriage, but he might possibly be the impatient groom. You may wish to see the Hall of the Initiation Rites at Villa of the Mysteries in Pompeii the walls of which are decorated by apparently unrelated scenes. 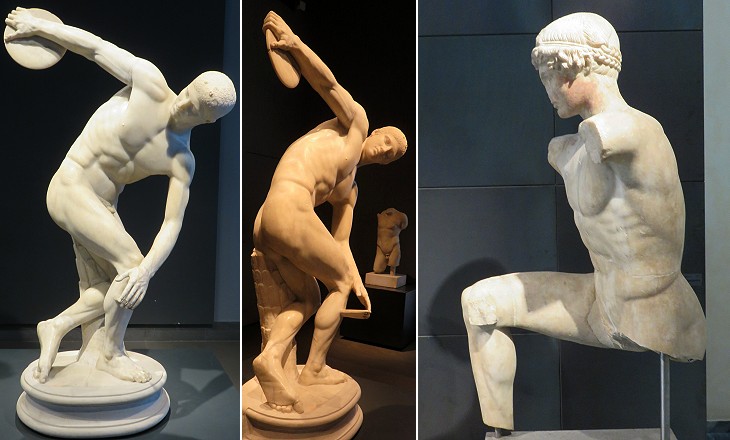 In 1781 a marble copy of the bronze statue of a discobolus by Myron, a Vth century BC Greek sculptor, was found at Villa Palombara; unlike other copies, this one was not broken and so it was possible to establish without doubt the position of the head. It was initially placed at Palazzo Massimi alle Colonne, but it was eventually moved to Palazzo Lancellotti ai Coronari. In 1948 it was acquired by the Italian Government.
In 1874 another Roman marble copy of a Greek bronze statue was found near S. Eusebio. It was broken into many pieces which were spread over a large area. Today some art historians question the way the pieces were assembled and the correctness of the reconstruction. A much damaged statue of a horse was found in the proximity and as a consequence the young naked athlete was believed to be a charioteer in the act of mounting on his chariot. The statue is now believed to portray Theseus, the founder of Athens.