Links to this page can be found in Book 8, Day 2, View B8 and Rione Monti. 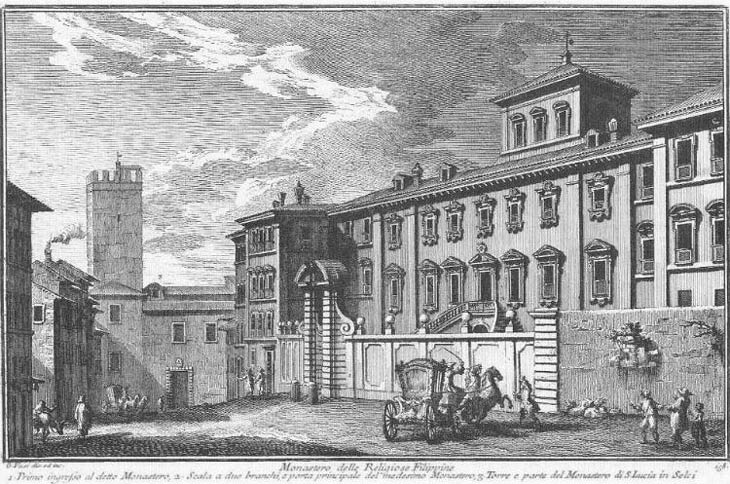 Vasi included this plate in Book VIII because Monastero delle Filippine housed nuns belonging to a congregation founded by St. Philip Neri, but from the point of view of the typology of the building the plate should have been included in Book X, the Villas of Rome. This because the nuns bought a XVIIth century casino (main building) of a villa which was built by the Sforza, whose main family branch ruled Milan in 1410-1535. In 1439 they acquired the fiefdom of Proceno in northern Latium and they eventually established family ties with the Farnese and the Cesarini of Genzano.
The view is taken from the green dot in the 1748 map by Giambattista Nolli below. In the description below the plate Vasi made reference to: 1) First entrance to the nunnery; 2) Steps leading to the main entrance; 3) Tower (Torre de' Capocci) and S. Lucia in Selci, another nunnery. The map shows also 4) Palazzo Ravenna. After 1870 the nunnery was confiscated by the Italian government; currently it houses a department of the Finance Ministry; the building has been slightly modified: the steps leading to the entrance are no longer curved and the fence and its portal have been redesigned. At the end of the street, some buildings which surrounded Torre de' Capocci have been pulled down. Overall this corner of Rome very near S. Maria Maggiore has retained a rather peaceful atmosphere. 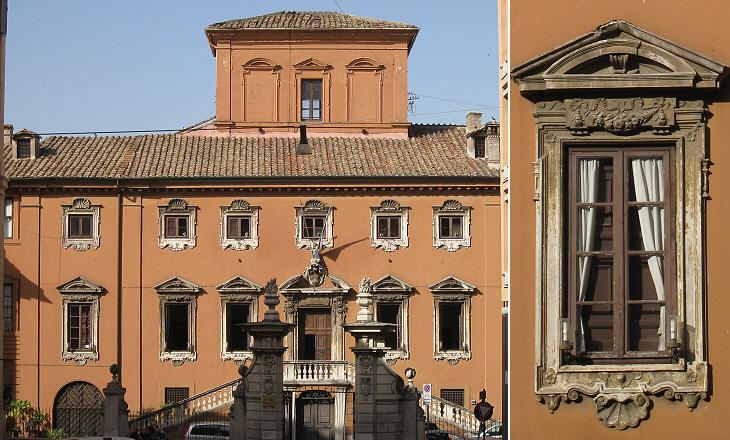 (left) Central part of the casino; (right) a window with a decoration including quince flowers and fruits, heraldic symbol of the Sforza, which can be noticed also in some halls of Palazzo Barberini

The nuns completed a renovation of the building in 1740, but they did not delete all the references to the former owners of the building and the Italian State in turn did not delete the references to the nuns. The image used as background for this page shows a detail of the fence portal where the coat of arms of the Italian Kingdom was added below an existing decoration (one of the many laughing masks which smile from Roman buildings and monuments). 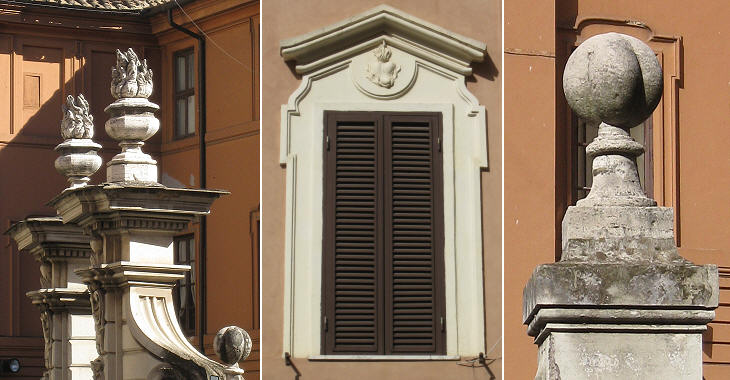 (left/centre) Flaming vases and hearts, symbols of the Congregation of St. Philip Neri; (right) a quince (?) 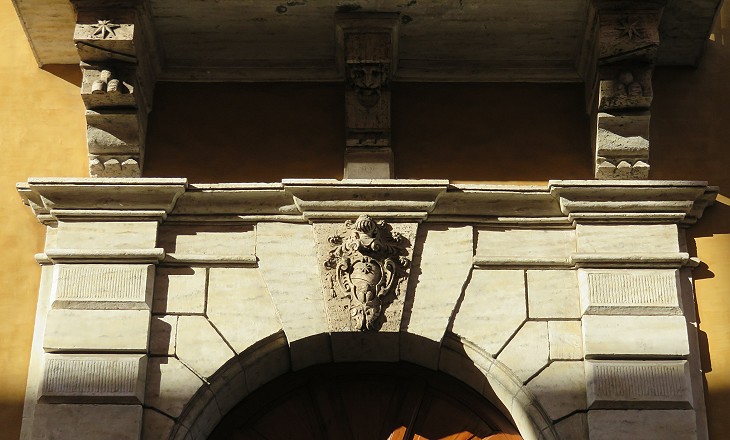 The 1748 map by Nolli shows a number on a palace on the right side of the street leading to the nunnery from S. Maria Maggiore. In the legend attached to the map, the building is named as Palazzo Ravenna, after a family who acquired it in 1639. The coat of arms on the portal is not that of the Ravenna and it was most likely added in the XIXth century when the building was redesigned and turned into a barracks. The mountains and the star could be a reference to the symbol of Rione Monti. 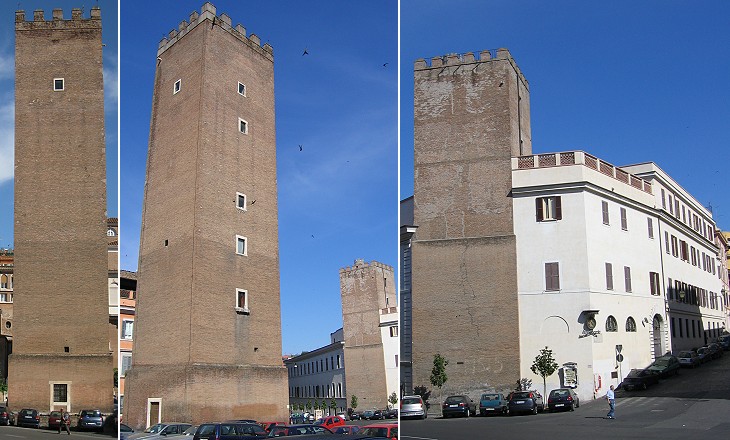 (left) Taller tower; (right) lower tower and the street leading to the nunnery

Between the XIth and the early XVth century the authority of the popes was so weak that Rome was partitioned among some important families who built defence towers to protect the area of the city they controlled. These two towers were most likely part of a castle and are named after the Capocci, who owned them in the XIIIth century (Cardinal Pietro Capocci founded the Hospital of S. Antonio Abate not far from the towers). The small town of S. Angelo was one of the Capocci fiefdoms. The towers were probably built with material taken from nearby Terme di Traiano.