Porta S. Spirito
(Vasi at work in the Grand View of Rome)

Links to this page can be found in Book 1, Map C2, Day 6, View D3, Rione Trastevere and Rione Borgo. 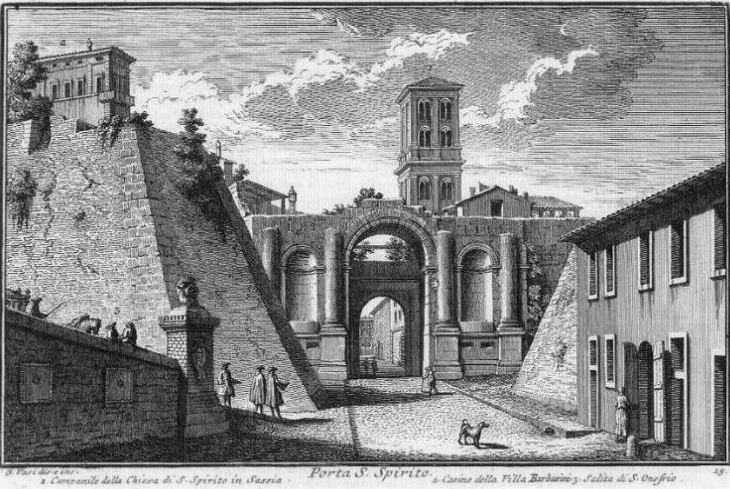 After the 1527 Sack of Rome by the mercenary troops of Emperor Charles V, Pope Paul III decided to strengthen the fortifications of the city; Antonio da Sangallo the Younger developed a comprehensive project which included the construction of eighteen bastions and two citadels; after the first bastion was completed in the southern section of the walls, the Pope realized that the total cost of the project was excessive and he therefore decided to limit the effort to the walls surrounding the Vatican which were built by Pope Leo IV in the IXth century.
Strangely enough Porta S. Spirito, a very large gate which replaced a small opening known as Posterula dei Sassoni, was built before the ramparts at its sides. In 1747 when Giuseppe Vasi drew this etching the gate had lost its defensive purpose because of the construction of new walls on the Janiculum hill and it was kept open at all times, similar to Porta Settimiana. It was named after nearby S. Spirito in Sassia, of which the plate shows the bell tower.
The view is taken from the green dot in the small 1748 map here below. In the description below the plate Vasi made reference to: 1) Bell tower of S. Spirito in Sassia; 2) Casino della Villa Barberini; 3) Street leading to S. Onofrio. The map shows also: 4) Porta S. Spirito; 5) Cimitero di S. Spirito. The dotted line in the map delineates the border between Rione Borgo (upper part) and Rione Trastevere (lower part).

The pillar which marked the beginning of the steep street leading to S. Onofrio was removed to open a new large road which links Porta S. Spirito with Porta Cavalleggeri via a tunnel under the hill; the small houses to the right of the gate belonged to Spedale de' Pazzi, an asylum for lunatics: they were in part pulled down to make room for the new road and in part they were replaced by an enlargement of Spedale di S. Spirito in the 1920s. Above the gate there is a passage built in 1869 to allow direct communication between Spedale de' Pazzi and Villa Barberini where the wealthiest lunatics were treated. 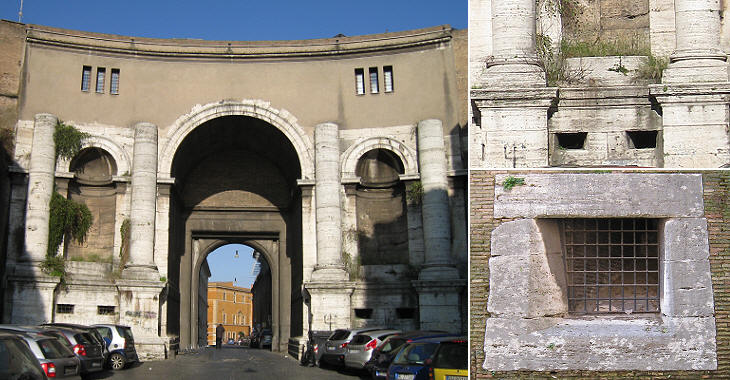 Sangallo had in mind to build new walls around the whole of the Vatican hill, but this view was challenged by members of the papal court including Michelangelo who believed it was unnecessary to protect the area behind S. Pietro which was void of buildings; the perception of the need for strengthening the defence of Rome depended very much on the threat posed by the Ottomans; it increased after the 1534 Ottoman raid of the coasts of Latium and it decreased after 1541 when a peace was signed between Venice and the Sultan. In 1545 the construction of Porta S. Spirito was halted; in the following year Sangallo died leaving unfinished the gate which should have resembled a Roman triumphal arch with space for long inscriptions on both sides. The design of the gate is neat and it conveys a feeling of strength; Porta S. Spirito could be easily taken for an ancient building, a gigantic nymphaeum, rather than a gate.

Spedale di S. Spirito in Sassia: (left) a portal with an inscription celebrating an enlargement by Pope Alexander VII; (centre) etching by Giovan Battista Falda showing the coat of arms above the inscription; (right) inner gate showing the symbol of the institution 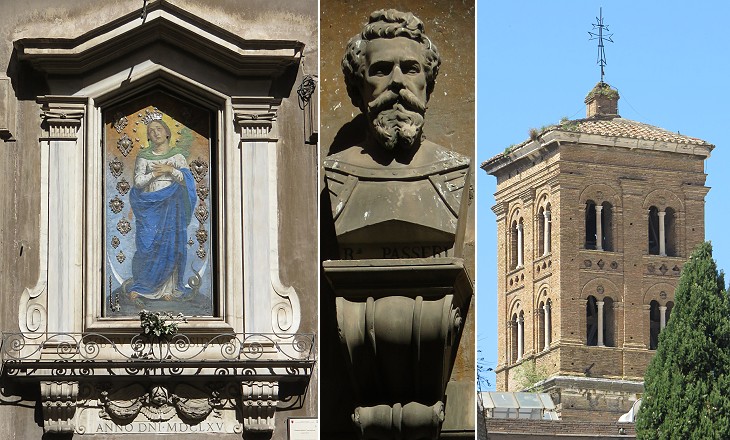 Bernardino Passeri was a goldsmith who worked for several popes; an inscription placed by his relatives says that in 1527 he took part to the fight near Porta S. Spirito and he managed to capture one of the enemy's flags before being killed; a copy of his bust was placed above the inscription in 1885. Many students of Collegio Capranica also died in that fight.

Via dei Penitenzieri: (left) Coat of arms of Pope Sixtus IV at the base of the bell tower; (right) 1588 inscription celebrating the construction of a wall to prevent the falling of stones from the hill by Pope Sixtus V 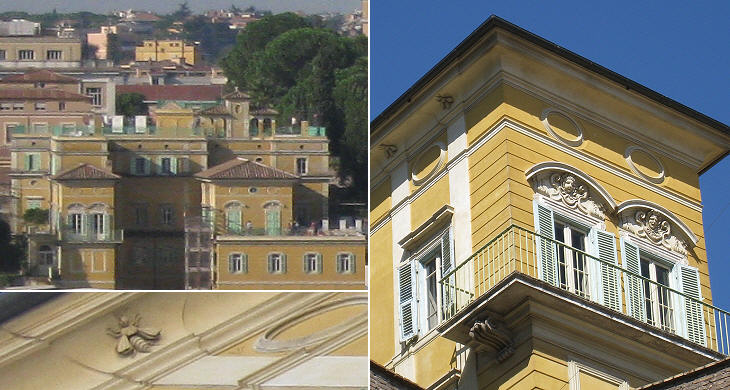 Taddeo Barberini was a nephew of Pope Urban VIII; in 1641 he bought a small building with some land around on the hill to the left of Porta S. Spirito; after the death of his uncle in 1644 he had to flee to France because he was charged with misappropriation of state funds. In 1671 his son Carlo commissioned Giovan Battista Contini to design a small but luxury casino; the garden was embellished with statues and fountains, but the Barberini heirs were not interested in this residence, which in 1863 became an annex to Spedale de' Pazzi. This led to many changes including the construction of a high wall to prevent patients from escaping. Eventually the property was acquired by the Jesuits who added several buildings to the original casino. Today it houses the Jesuit headquarters (they once were located at Casa Professa). Curved wall which surrounded the cemetery; (inset) detail of the 1781 Map of Rome by Giuseppe Vasi showing the location of the cemetery

In 1744 Pope Benedict XIV commissioned Ferdinando Fuga to design a cemetery outside the gate for the dead of Spedale di S. Spirito. The cemetery was closed in 1891 and today only the shape of the external walls hint at the former use of the area. 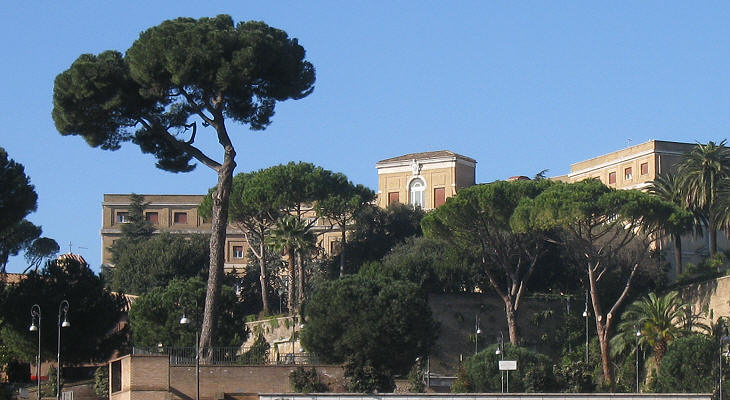 In 1931 the area of the former cemetery was used for the construction of a complex of modern buildings housing a section of Collegio di Propaganda Fide, the institution founded by Pope Urban VIII to coordinate missionary activities. 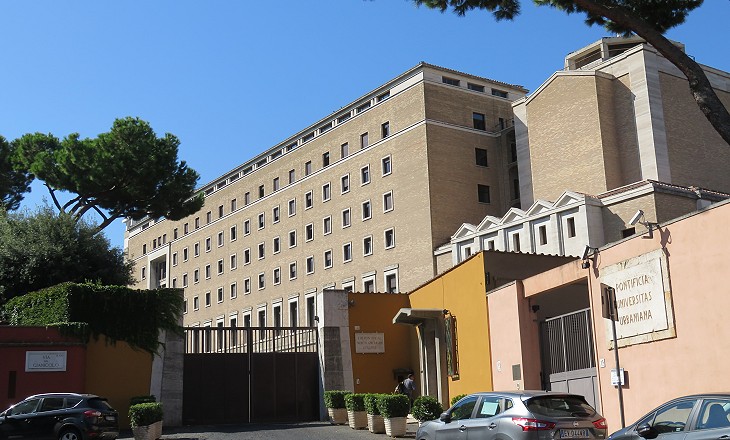 Pontifical North American College near Collegio Urbano. It was designed by Pietro Galeazzi and it was inaugurated in 1953; the old one is located near S. Maria delle Vergini. Similar to Collegio Urbano it is an extraterritorial property of the Holy See

The Walls between Porta S. Spirito and Porta Cavalleggeri 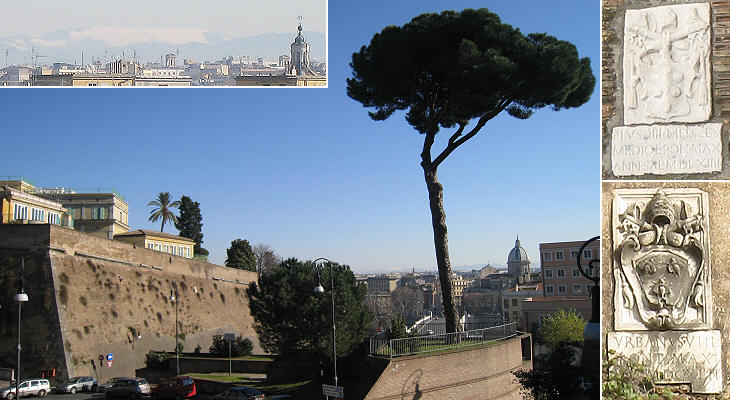 (left) View of Rome from the former cemetery: to the left a section of the walls and Villa Barberini; to the right S. Giovanni dei Fiorentini; the inset shows snow on the mountains east of Rome (January 2010) and the tip of S. Agnese in Agone; (right) coats of arms of Pope Pius IV (above) and Pope Urban VIII (below)

The construction of the new walls around the Vatican started again in 1562 during the pontificate of Pope Pius IV who endorsed the initial project by Sangallo and surrounded the whole hill with a series of bastions. The section of the walls between Porta S. Spirito and Porta Cavalleggeri became useless when in the following century Pope Urban VIII built new walls on the Janiculum. Today one can walk along them only for a short stretch, because the street stops at Collegio Urbano. 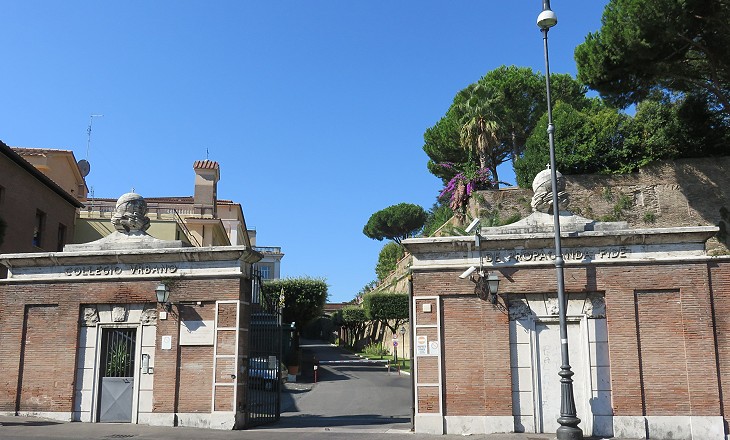 Section of the walls inside Collegio Urbano