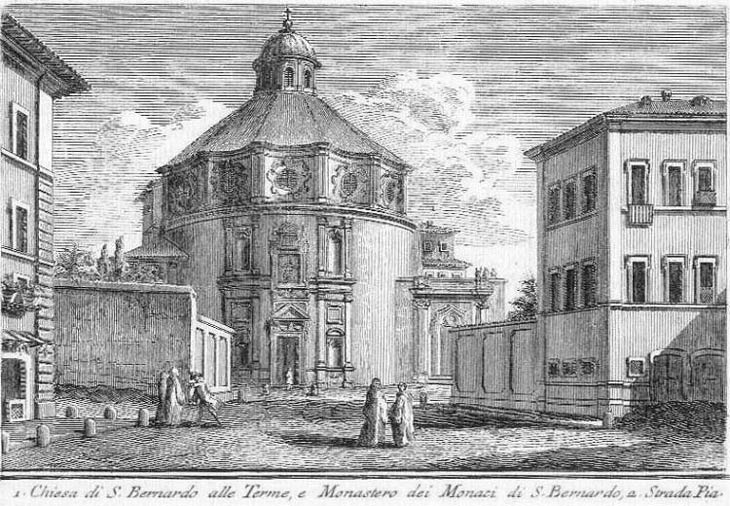 This plate is one of the smaller views which Giuseppe Vasi added to the standard 20 plates of each book. In Book 7 which covered the Friaries and was published in 1756 he had to add nine smaller views in order to properly cover the topic. Alle Terme is a reference to Terme (Baths) di Diocleziano, because the church was built inside a hall of the ancient baths.
The view is taken from the green dot in the 1748 map below. In the description below the plate Vasi made reference to: 1) S. Bernardo alle Terme; 2) Strada Pia. Strada Pia is covered in another page. The small map shows S. Susanna, a nunnery which stood opposite S. Bernardo. The dotted line delineates the border between Rione Trevi (above) and Rione Monti (below). 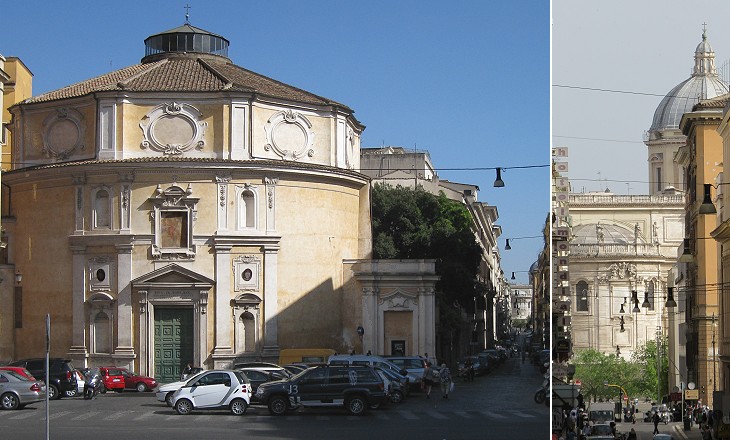 The view in August 2009 and enlargement of the street (Via Torino) leading to S. Maria Maggiore

12th November 1644. We saw Dioclesian's Baths, whose ruins testify the vastness of the original foundation and magnificence. (..) The Church of St. Bernardo is made out of one only of these ruinous cupolas, and is in the form of an urn with a cover.
John Evelyn's Diary and Correspondence
The lantern of the dome was demolished in the XIXth century because its weight endangered the stability of the Roman structure, so that the building does not have any longer the shape of an ancient funerary urn. In 1872 part of the land belonging to the monastery was acquired by the Italian State for opening a new street between Strada Pia (today's Via XX Settembre) and S. Maria Maggiore. 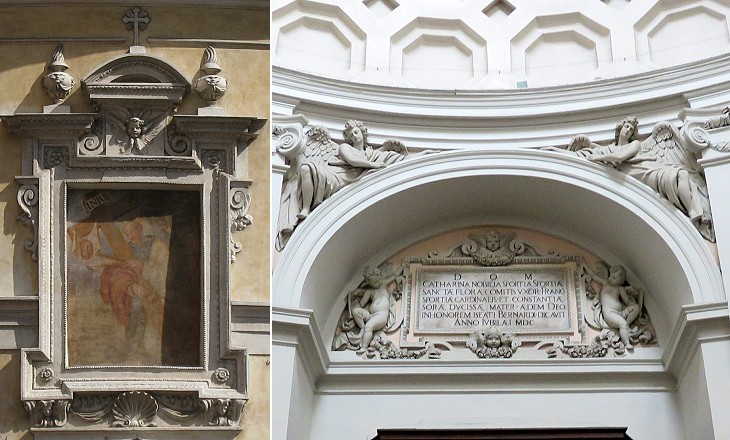 Stucco decoration: (left) frame of a fresco on the façade which portrays St. Bernard of Clairvaux holding the Cross to which the Veil of Veronica is attached; (right) rear façade with inscription celebrating the completion of the church in the 1600 Jubilee Year

The ancient Roman hall was turned into a church in 1596 at the initiative of Caterina Nobili, a niece of Pope Julius III and the widow of Sforza I Sforza, Count of Santa Fiora, a tiny state which included Proceno in northern Latium and other territories in southern Tuscany. The church and the adjoining monastery were her gift to Abbot Jean de la Barrière who in 1586 founded a new branch of the Cistercian order. In 1592 the Abbot came under suspicion of having supported the Huguenots and later on he was placed under a sort of house arrest in the new monastery where he died in 1600.
The church was dedicated to St. Bernard of Clairvaux, one of the first members of the Cistercian order. 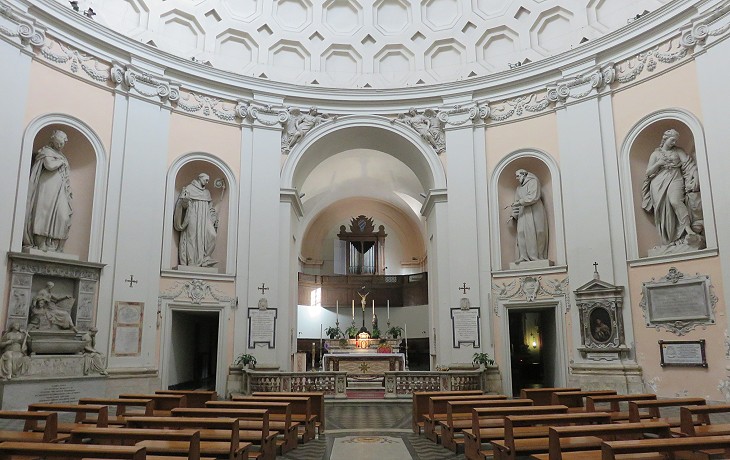 The design of the interior was influenced by that of Pantheon, the ancient temple which originally housed statues of gods inside niches in the wall. The church had no windows and it received light from the opening in the dome. The decorative elements of the building (including those of the drum, one of which you can see in the image used as background for this page) and the statues are made of stucco, a material which was widely employed and technologically improved during the XVIIth century as one can see at S. Andrea al Quirinale, not far from S. Bernardo. 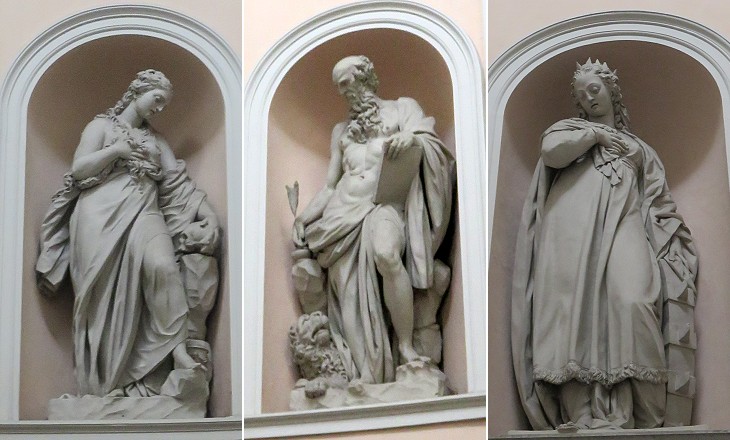 Camillo Mariani's work was of great consequence in revitalizing Roman sculpture. He was born in Vicenza. (..) Shortly after his arrival in Rome he executed his masterpieces, the eight simple and noble monumental stucco figures of saints in S. Bernardo alle Terme, in which the Venetian nuance is obvious for anybody to see; but it is strengthened by a new urgency and a fine psychological penetration which make these works stand out a mile from the average contemporary production and ally them to the intense transitional style in painting in which we found crystallized the true spirit of the great reformers.
Rudolf Wittkower - Roman Art and Architecture 1600-1750 Penguin Books 1958
Camillo Mariani came to Rome towards the end of XVIth century and the eight large statues he made for S. Bernardo alle Terme recall works by Veronese, Titian and in general by the Venetian school. In Rome he trained Francesco Mochi who became a leading sculptor to the point of being asked by Gian Lorenzo Bernini to work at the decoration of S. Pietro.

(left) Altar to St. Bernard; (centre) Chapel of St. Francis; (right) marble inlays on the balustrades of the altars

The use of stucco, rather than marble, and in general the design of S. Bernardo alle Terme complied with the austere lifestyle requested of the Cistercian monks by Jean de la Barrière. During the course of the XVIIth and early XVIIIth century however this approach was relaxed slightly and the church was embellished with altars which were decorated with marbles. 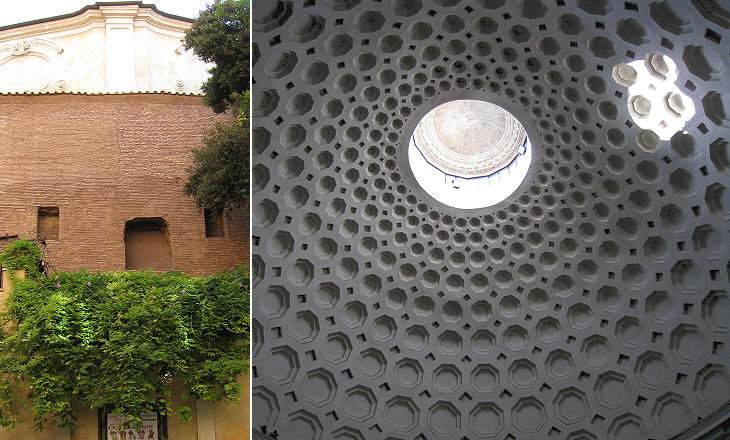 (left) Ancient Roman wall seen from Via Torino; (right) interior of the dome

The ancient circular hall was located at the south-western corner of the baths: an identical building was located at their south-eastern corner. It is thought that they were used for exercising or playing ball games (sphaeristeria) or for resting. The shape of the concrete coffers of the vault is similar to that at Tempio della Pace (Basilica di Massenzio), which was built in the same period.