Ponte Sisto
(Vasi at work in the Grand View of Rome)

Links to this page can be found in Book 5, Map C3, Day 6, View D8, Rione Trastevere and Rione Regola. 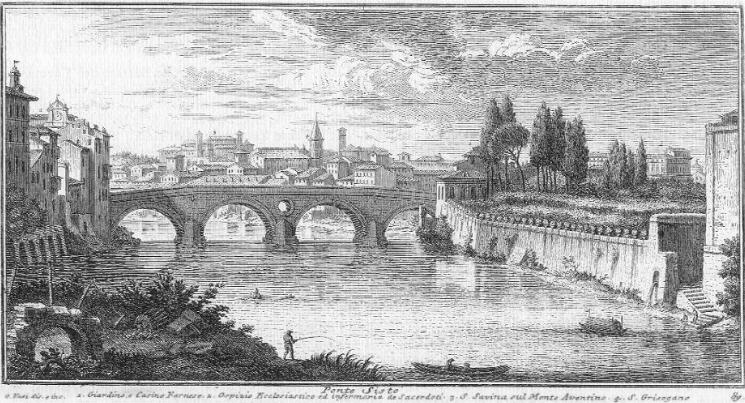 In Book V, which covered the monuments along the River Tiber and which was published in the first months of 1754, Giuseppe Vasi made use of some copperplates he had engraved in the 1740s for Vedute di Roma sul Tevere, a book covering the same subject, but with views of a smaller size; these early works showed landscapes, rather than focusing on specific monuments.
In the foreground of this plate Vasi shows Passo della Barchetta all'Armata, a small boat which ferried passengers between the steps leading to S. Giacomo alla Lungara, on the right bank of the river, and S. Eligio degli Orefici.
The view is taken from the green dot in the small 1748 map here below. In the description below the plate Vasi made reference to: 1) Giardino Farnese (Farnesina); 2) Collegio Ecclesiastico; 3) S. Sabina sul Monte Aventino; 4) S. Grisogono. All are shown in detail in other pages; the small map does not show S. Sabina sul Monte Aventino and S. Grisogono but 3) Ponte Sisto; 4) Passo della Barchetta all'Armata and 5) approximate location of Sepolcro dei Platorini. 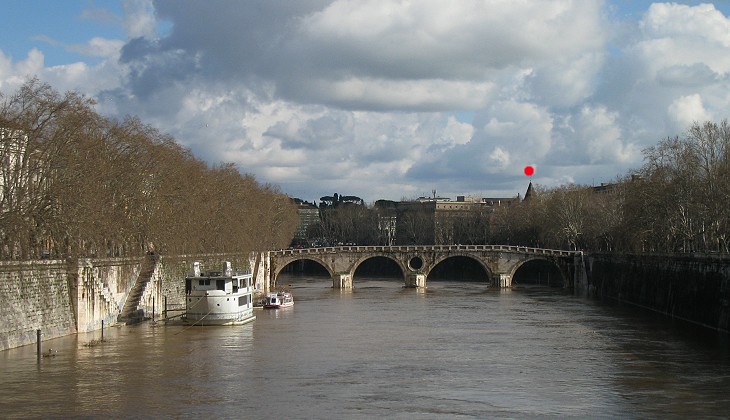 In the 1880s the river bed was enlarged and high walls were built on the banks to prevent floods; the spire of S. Grisogono (red dot) is still visible while some modern buildings obstruct the view of S. Sabina, but not that of the stone pines of an adjoining garden. 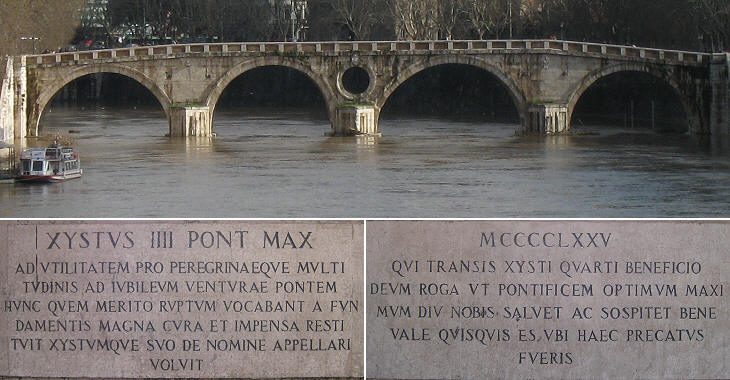 (above) Ponte Sisto; (below) inscriptions: that on the left is factual, that on the right is a request

In 1450 a mule became unruly on Ponte S. Angelo during a crowded Jubilee Year procession and many people fell into the river. In view of the forthcoming 1475 Jubilee Year, Pope Sixtus IV built a new bridge to facilitate access to S. Pietro and to avoid a repetition of the 1450 accident.
The Pope wanted the bridge to bear his name (Xystumque suo de nomine appellari voluit), as stated in the first inscription; in a second inscription he also asked those who crossed the bridge to pray for his health. The inscriptions were written by Bartolomeo Platina, the Pope's librarian and the author of Vitae Pontificum, a book on the lives of the popes from St. Peter to 1474; at the end of the second inscription Platina wrote a sentence which brings to mind epitaphs on ancient tombs: Bene vale quisquis es ubi haec precatus fueris "Farewell (in the literal sense of fare+well) to you, whoever you are, as long as you prayed (for me)". You may wish to see Bartolomeo Platina (on his knees) and Pope Sixtus IV with his nephews in a famous painting by Melozzo da Forlì (it opens in another window), a detail of which can be seen in the icon of "Abridged History of Rome" at the end of this page. 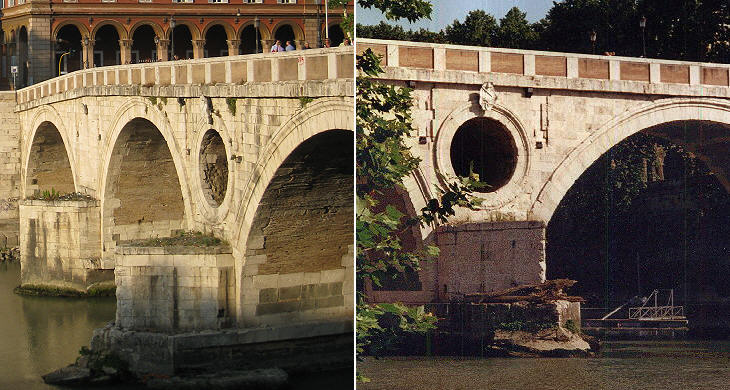 Ponte Sisto made use of the remaining piers of ancient Pons Aurelius; their bases had the shape of a boat with the bow facing the stream.
Other images of the bridge can be seen in another plate by Vasi and you can see it with a crowd waiting for the passage of Madonna Fiumarola, a religious procession dear to the inhabitants of Trastevere or with a view of some monuments of that rione. The image used as background for this page shows the coat of arms of Pope Sixtus IV. 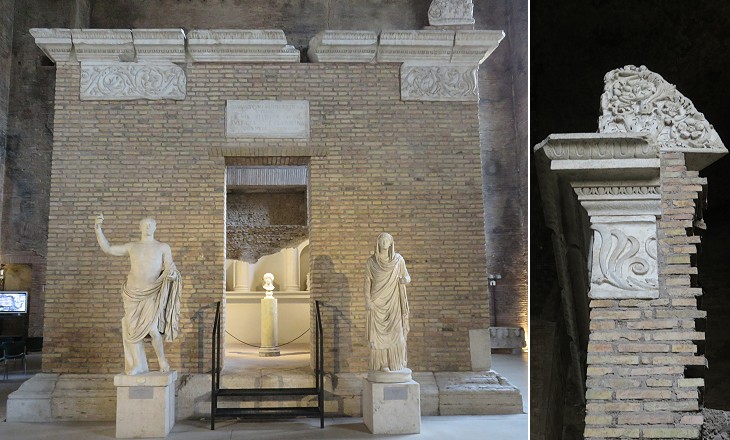 This tomb was identified in 1880 near the tower of the ancient Roman walls on the river bank, not far from a Roman villa. In 1883 it was dismantled because the river bed was enlarged. In 1911 it was reassembled inside Terme di Diocleziano. It was a brickwork building which was faced with marbles. Its decoration is dated early Ist century AD. Two statues and the bust of a girl were found inside the tomb. 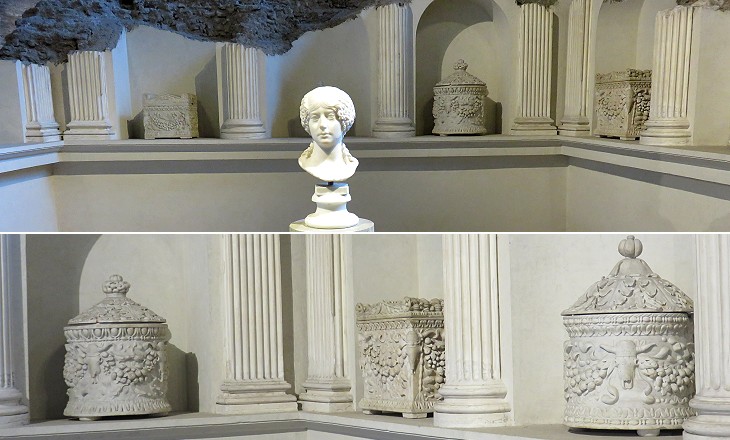 From an inscription engraved on marble above the entrance door, we learn that the mausoleum was raised in memory of Caius Sulpicius Platorinus, a magistrate of the time of Augustus, and of his sister Sulpicia Platorina, the wife of Cornelius Priscus. The room contained nine niches, and each niche a cinerary urn, of which six were still untouched. These urns are of the most elaborate kind, carved in white marble, with festoons hanging from bulls' heads, and birds of various kinds eating fruit. Some of the urns are round, some square, the motive of the decoration being the same for all of them. The cover of the round ones is in the shape of a tholos, a building shaped something like a beehive, the tiles being represented by acanthus leaves, and the pinnacle by a bunch of flowers.
The covers of these urns were fastened with molten lead. The unsealing of them was an event of great excitement; it was performed in the coffee-house of the Farnesina, in the presence of a large and distinguished assembly. I remember the date, May 3, 1880. They were found to be half full of water from the last flood of the Tiber, with a layer of ashes and bones at the bottom. The contents were emptied on a sheet of white linen. Those of the first had no value; the second contained a gold ring without its stone, - which was found, however, in the third cinerarium; a most extraordinary circumstance. It can be explained by supposing that both bodies were cremated at the same time, and that their ashes were somehow mixed together. The stone, probably an onyx, was injured by the action of the fire, and its engraving nearly effaced. It seems to represent a lion in repose. Nothing was found in the fourth; the fifth furnished two heavy gold rings with cameos representing respectively a mask and a bear-hunt. The last urn, inscribed with the name of Minasia Polla, - a girl of about sixteen, as shown by the teeth and the size of some fragments of bone, - contained a plain hair-pin of brass.
Rodolfo Lanciani - Pagan and Christian Rome - 1892