You may wish to read a page on Medieval and Renaissance Monuments first.

Gian Lorenzo Bernini was asked by Pope Urban VIII not only to design a monument to him, but to define a pattern for the monuments to be placed in S. Pietro, which at that time was finished from a structural point of view but completely empty as far as statues and monuments are concerned. The size of S. Pietro was such that the approach followed for the papal monuments at Cappella Sistina and Paolina in S. Maria Maggiore would have been extremely expensive in S. Pietro as it required filling a wall up to the ceiling with columns, marbles, statues and reliefs. 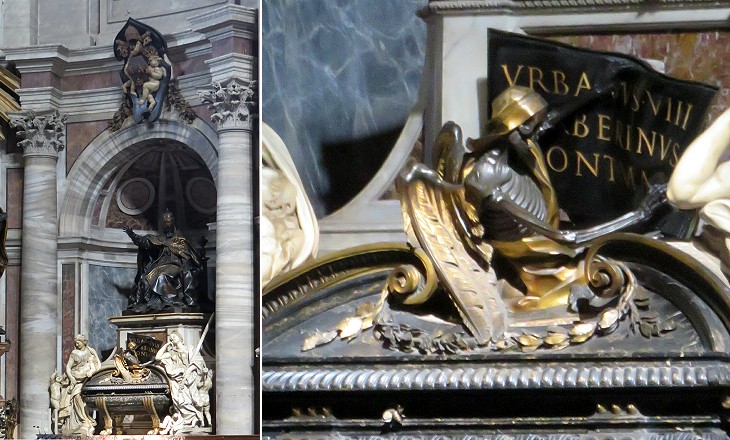 The tomb of Urban VIII established the new type of the papal monument. Looking back via Guglielmo della Porta's tomb of Paul III to Michelangelo's Medici Tombs, Bernini achieved an ideal balance between a commemorative and a ceremonial monument, and it is this concept that many later sculptors endeavoured to follow with more or less success.
Rudolf Wittkower - Art and Architecture in Italy 1600-1750 Penguin Books 1958
Bernini moved the Monument to Paul III into a deep niche (in the southern side of the apse) framed by two columns and the coat of arms of the pope. He then designed the Monument to Urban VIII following the same pattern, but revising the proportions of the elements and increasing the vertical lines. He introduced a dramatic element by showing a bronze Angel of Death in the act of tearing the name of the pope (see Representation of Death in Baroque Sculpture for more details on this topic). 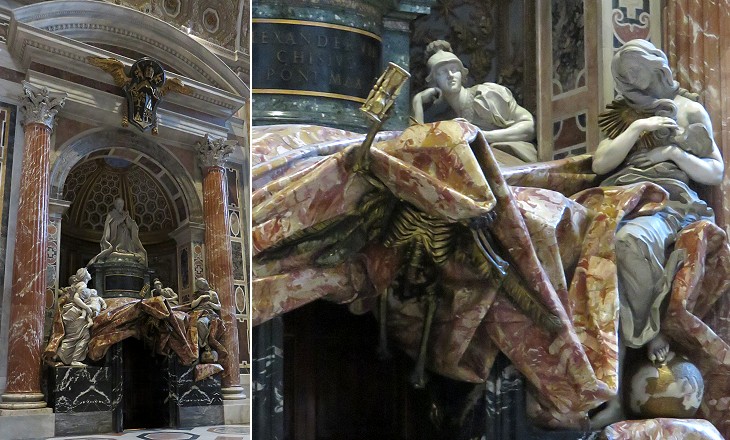 A dramatic representation of Death marks also the Monument to Pope Alexander VII designed by Bernini in 1678, when he was 80. The niche chosen for the monument had a door which allowed direct access to the area under the dome and which was needed as an alternative to the distant doors of the façade. Bernini built upon this constraint and modified the pattern of the Monument to Urban VIII, while maintaining its overall pyramidal shape. The Monument is built around the relation between the statue of the Pope portrayed bareheaded and in the act of praying on his knees and a representation of Death in the form of a winged skeleton in the act of showing to the Pope a clepsydra (or hour-glass, a wasp-waisted reversible glass with two bulbs containing enough sand to take a definite time in passing from upper to lower bulb) to tell him that his life is over. 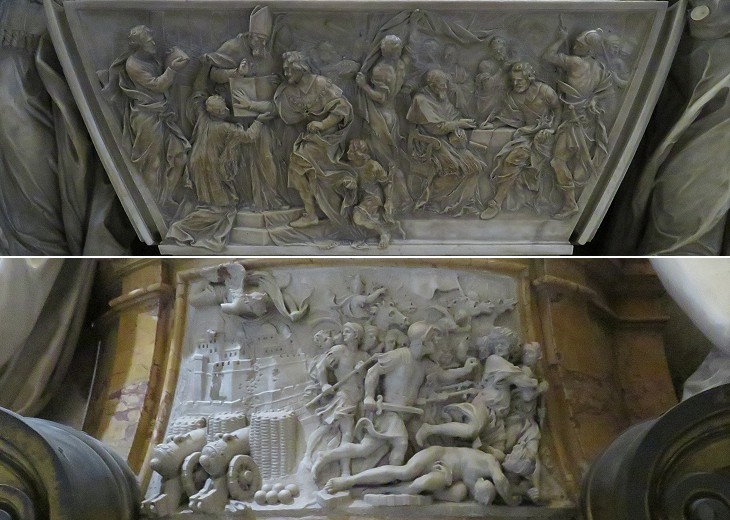 Reliefs in the Monuments to Pope Leo XI by Alessandro Algardi (1652) and Pope Innocent XI by Pierre Etienne Monnot (1701) in S. Pietro

The statues of the Virtues which accompanied the statue of the pope had for a long time a standardized iconography which made the viewers understanding of whos who easier. Charity was always portrayed in the act of offering her breast to a child, with another child waiting at her foot. Some Baroque monuments show also some animals, either associated with the Virtues (a dog usually accompanied Faith, a lion Strength, a remora - suckerfish - Prudence) or with the heraldic symbols of the pope (the dragon of Gregory XIII).

Towards the end of the XVIIIth century the whole Baroque iconography fell under heavy criticism and it was redefined so that the Neoclassical statues of the Virtues (or of other allegories of human behavior) have little in common with the corresponding Baroque statues of the Virtues. The bodies of the Virtues became rigid, the dresses changed, the traditional distinctive elements were abandoned. Strength in particular went through a radical change and the female Mars by Rusconi became the female Hercules by Thorwaldsen. 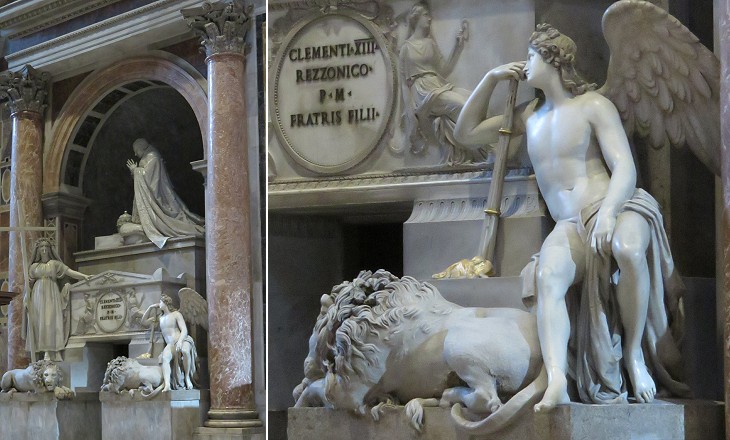 Antonio Canova (1757-1822) had between 1780 and 1820 the same role of Bernini in the XVIIth century in revisiting the Monument to the Pope. He was commissioned more or less at the same time two monuments: the Monument to Pope Clement XIII in S. Pietro and the Monument to Pope Clement XIV in SS. Apostoli. The monument in S. Pietro has some points in common with that to Alexander VII because also Canova portrayed the Pope in the act of praying on his knees. Apparently the most striking difference between Bernini and Canova is the Angel of Death whom Canova portrayed as a naked youth in a languid posture. The Angel is combed like the Apollo of Belvedere to signal the link with the Classical world, but the statue has also another reading clue, more profane and to some extent admitted by Canova himself who used to say "I cannot represent what I do not like".

The image used as a background for this page shows a detail of the Monument to Pope Leo XI by Algardi.

Move to Part one - Medieval and Renaissance Monuments
Move to Part three - Lists of the Monuments
Other pages dealing with Baroque sculpture:
Statues in the act of praying
Representation of Death in Baroque sculptures
Monuments showing the dead in a medallion
Baroque High Reliefs
Baroque Angels
Three chapels by Gian Lorenzo Bernini
Bernini's Exiled Statue
Three busts by Alessandro Algardi
Statues Close to Heaven
Embittered Andrew (the statues in the Octagon of S. Pietro)
Laughing Masks
The Last Baroque Tomb
Playing with Colours
A Directory of Baroque Sculpture