- Formia - Other Monuments
(Amphitheatre of Capua)

You may wish to see an introductory page to this section or a page on the monuments of Formia which attracted the attention of the Grand Tour travellers first. 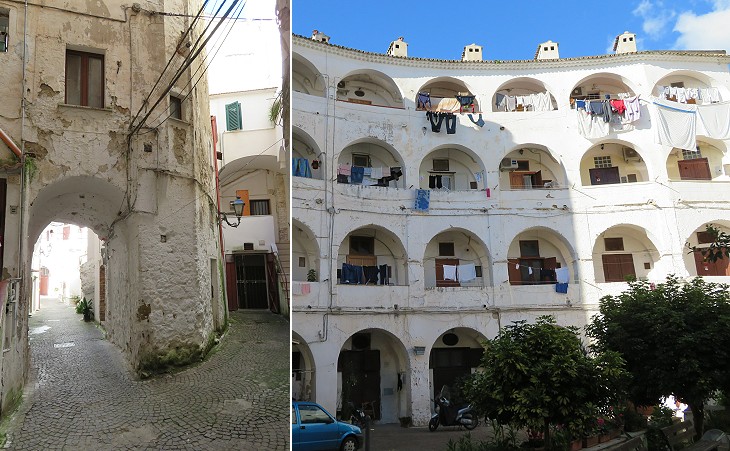 The XVIIIth century travellers who visited Formia saw a number of villas and tombs, but not much evidence of the ancient town itself. Archaeologists were able to identify its urban layout only in the early XXth century. Formiae had a theatre on an elevation of the ground in the western part of the settlement. It was fortified, most likely in the VIth century AD when Italy was ravaged by the Greek-Gothic War. Eventually the whole neighbourhood around the theatre was turned into a castle (Castellone means Large Castle, but in origin it was most likely known as Castel Leone, Castle of the Lion). In Roman times Caeta, the promontory to the west of Formiae, housed a suburb of the latter. In the IXth century the threat of raids by the Saracens led to the development of a town on the promontory which was easily defensible because of its high cliffs. Castellone and nearby Torre di Mola became possessions of the rulers of Gaeta. In 1140 Gaeta and its territory were incorporated into the Kingdom of Sicily, which included the southern part of the Italian peninsula. While Gaeta became a key fortress of that kingdom and its fortifications were upgraded to the requirements of artillery warfare, those of Castellone were not modified and they retain the aspect they were given in the XIVth century. In 1930 ancient structures were identified under the houses of Castellone, but their actual size and purpose was not evident until they were cleared from the rubble which was thrown inside them. It is now possible to admire a cistern of the Ist century BC which received water from springs in the mountains behind Formia and redistributed it to public fountains and to private villas. 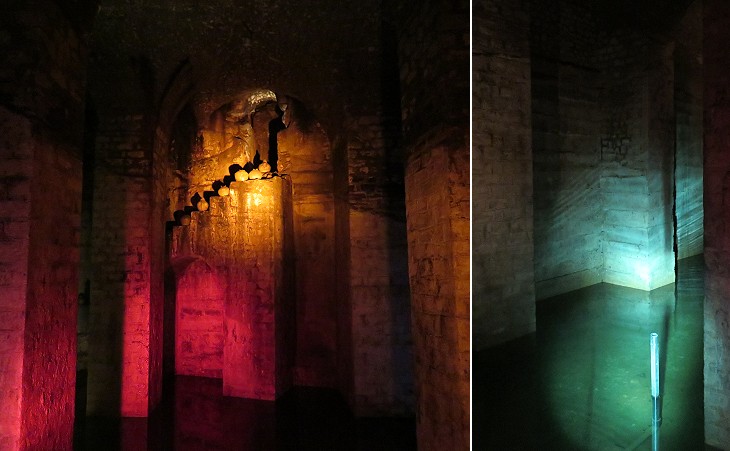 Roman Cistern (you may wish to see an evocative etching by Giovanni Battista Piranesi - it opens in another window - showing Sette Sale, the cisterns of Terme di Traiano in Rome)

The cistern retains its original aspect and it brings to mind Yerebatan Sarayi, a VIth century cistern of Constantinople. It testifies to the engineering skills of the ancient Romans. 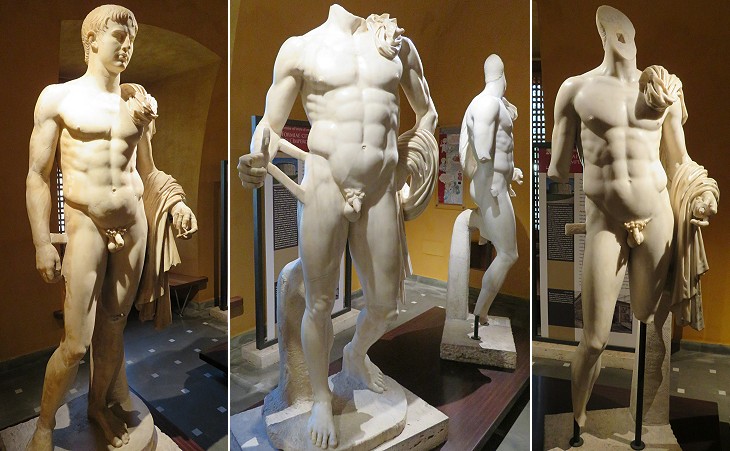 Archaeological Museum of Formia: statues found in the forum in the 1920s

Archaeologists identified the site of the forum of the ancient town between Castellone and the shoreline. It was decorated with some very fine statues, either of members of the imperial family or of local benefactors. Three of them in particular catch the attention of the visitors of the small archaeological museum of Formia. They portray young men in heroic nudity, i.e. they depict ordinary mortal beings as if they were heroes or gods (you may wish to see similar statues which were found in Perge, Pergamum, Ostia and Herculaneum). 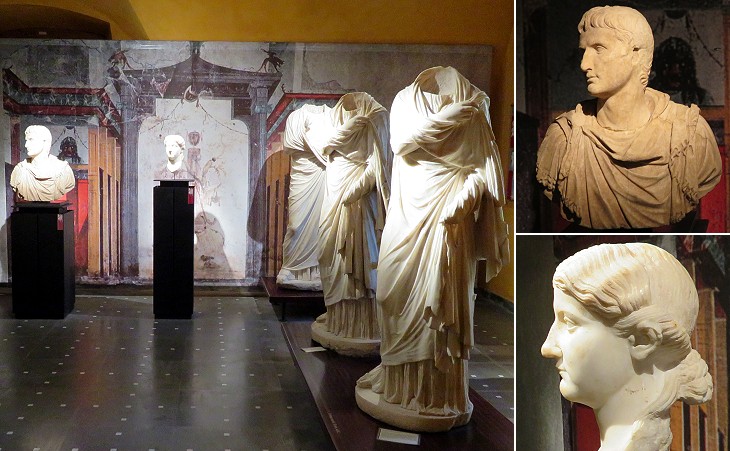 Archaeological Museum of Formia: statues of women and busts of Emperor Augustus and Livia, his third wife; in the background a panel shows a copy of a painting in Casa di Augusto in Rome

Other fine statues which were found in the ancient town or in its suburban villas can be seen in the introductory page. Archaeological Museum of Formia: inscriptions celebrating members of the College of the Augustales

Some of the statues found in the forum were erected at the initiative of members of the local College of the Augustales, a body which, similar to those of other provincial towns (e.g. Ostia, Herculaneum and Lucus Feroniae), had the purpose of celebrating the imperial family.
Aulus Scantius held offices in Mauretania Tingitana (Morocco) and Dalmatia, most likely at the end of the IInd century AD. Clodius Hilarus was entitled to a bisellium, a special folding seat in the theatre. He paid this privilege 25,000 sesterces which were used to finance gladiatorial combats. In 2011 the location of the amphitheatre of Formiae was identified near the railway station. 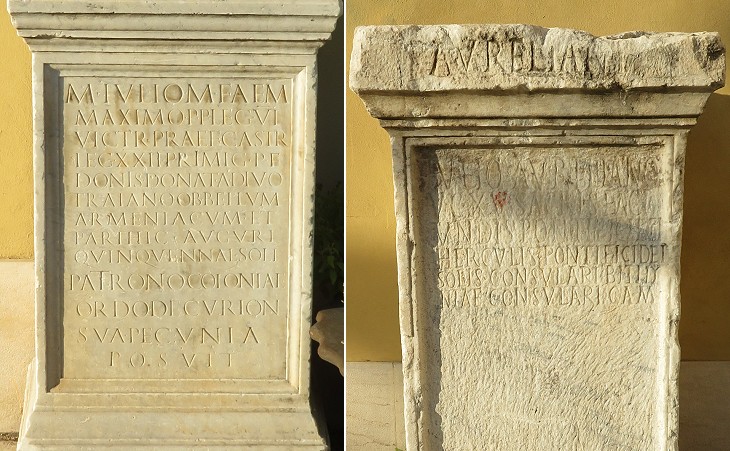 Archaeological Museum of Formia: (left) inscription celebrating an officer who took part in the campaigns of Emperor Trajan against the Parthians in ca 115 AD; (right) inscription of a governor of Campania

Other inscriptions shed light on military and organizational aspects of the Roman Empire. We know that Trajan gathered a very large army for his campaign against the Parthians. Julius Maximus was an officer of Legio XXII Primigenia Pia Fidelis which protected the Rhine border and was based in Mogontiacum (Mainz), yet he took part in the campaign, maybe at the head of a vexillatio, a detachment of 1,000 infantry and 500 cavalry.
Iulius Aurelianus was governor of Campania in 334 after a reform by Emperor Diocletian created this position also for the territories of the Italian peninsula. The poor carving of the inscription testifies to the decline of the town, while the fact that Iulius Aurelianus was head priest of temples shows that the old religion was still alive. The inscription was the pedestal of a statue of Crispus, son of Emperor Constantine. 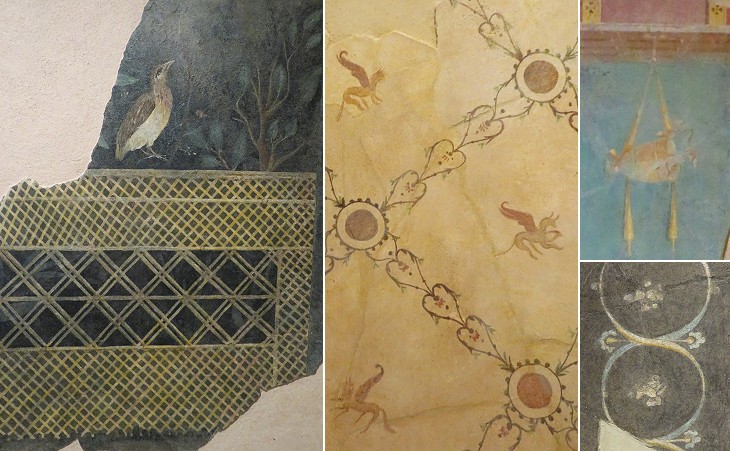 Archaeological Museum of Formia: frescoes from villas near Formia: (left) a garden (see the same subject in Villa di Livia near Rome, in the House of the Orchard in Pompeii and in Villa di Poppea at Oplontis); (centre/right) other subjects

The museum houses a small number of fragments of frescoes which decorated the Roman villas; they are of excellent quality and confirm the high status of many landlords. The image used as background for this page shows a stucco decoration on display in the museum. 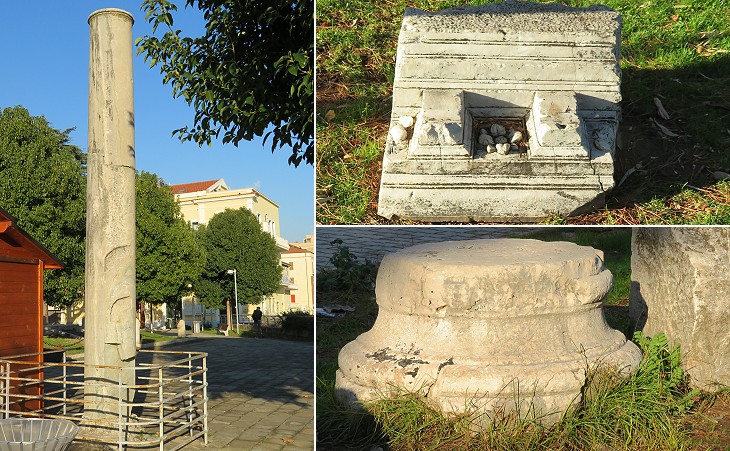