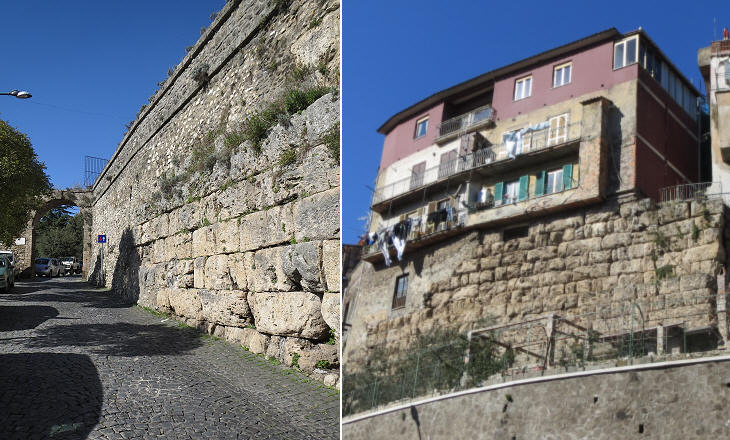 Sections of the ancient walls near Porta di Sotto

Varia was a town of the Aequi, an Italic tribe which was subdued by the Romans in the IVth century BC. It was protected by walls which can still be seen at the western entrance to the town. It was abandoned after having been repeatedly sacked by the Longobards in the late VIth century AD. In the XIIth century it was repopulated and it became known as Vicus Variae (hamlet of Varia), hence Vicovaro. 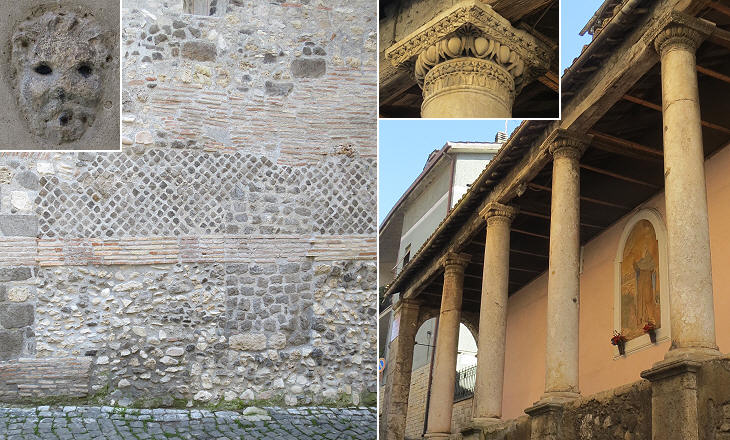 (left) Roman wall in "opus mixtum" at S. Sabino; (inset) head of lion in the wall of a nearby building; (right) ancient columns at S. Antonio Abate and detail of a capital

The new town was built making use of some walls and materials of the ancient one which can still be seen here and there; the fine columns and capitals which were used for the portico of S. Antonio Abate were found at an ancient Roman villa near Vicovaro. In 1191 Pope Celestine III assigned Vicovaro to his nephew Orso di Bobone who is regarded as the founder of the House of the Orsini. His descendants acquired other fiefdoms bordering on Vicovaro, such as Nerola, and in 1421 they were assigned the very important Abbey of Farfa. 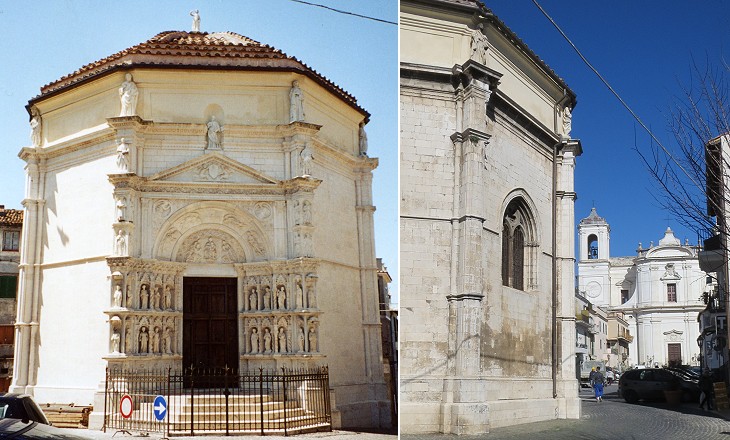 In 1454 the Orsini and in particular Giovanni Orsini, Archbishop of Trani, a town in the Kingdom of Naples (where the Orsini had several fiefdoms) initiated the construction of an octagonal building (S. Giacomo) which should have been the burial chapel of the Orsini of Vicovaro. It was designed by Domenico da Capodistria and it was completed by Giovanni Dalmata in 1465. They both came from territories on the eastern shore of the Adriatic Sea which belonged to the Republic of Venice. We know that Giovanni Dalmata came to Rome to work for Pope Paul II who was a Venetian. 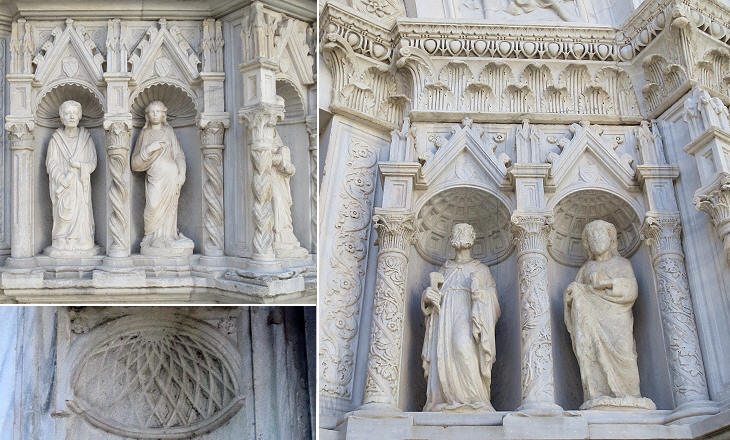 S. Giacomo: details of the lower part of the portal by Domenico da Capodistria

The lower part of the portal apparently follows traditional medieval patterns, but the niches housing statues of saints show references to monuments of Ancient Rome. In particular the ceilings of some niches resemble those of the Pantheon and of Tempio di Venere e Roma. 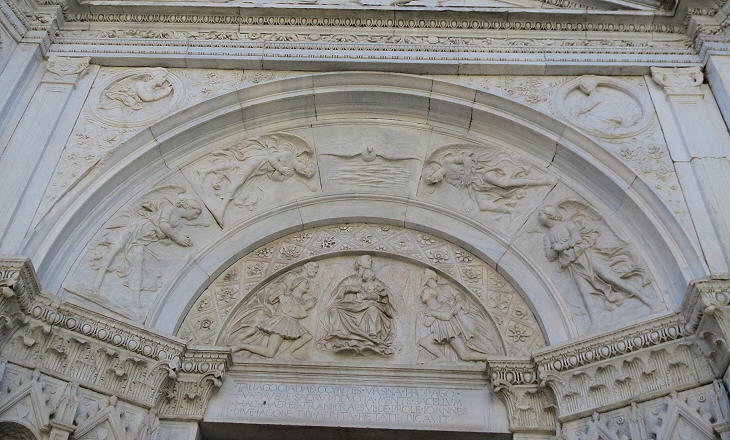 S. Giacomo: upper part of the portal by Giovanni Dalmata (a detail is shown in the image used as background for this page)

The upper part of the portal has a definite Renaissance appearance because the medieval pointed arch is replaced by the semi-circular arch of the Roman tradition. Giovanni Dalmata was a talented sculptor and he was a master in stiacciato, a very low relief. It is possible that the reliefs were painted or meant to be painted. You may wish to see painted reliefs by Agostino di Duccio, a sculptor of the same period, at Tempio Malatestiano di Rimini. 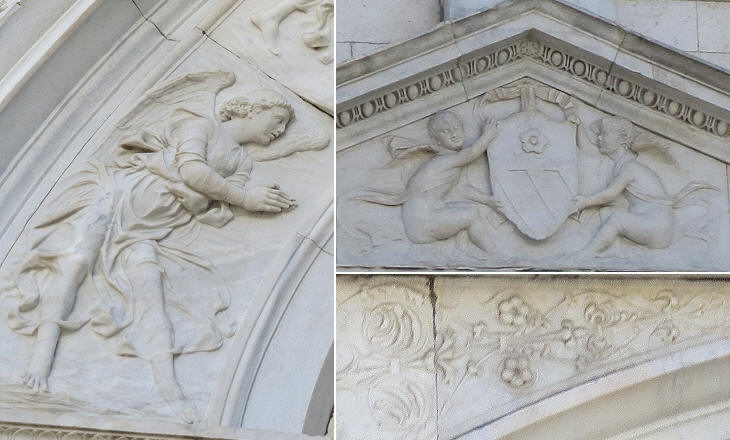 S. Giacomo: details of the upper part of the portal by Giovanni Dalmata

The floating clothes of the angels by Giovanni Dalmata are an early version of those of the XVIIth century. The depiction of a human body beneath a light cloth became a virtuoso piece for every Renaissance/Baroque sculptor who wanted to show his skill.
A five-petal rose was the heraldic symbol of the Orsini and it can be seen in many parts of the portal, not only in the coat of arms. 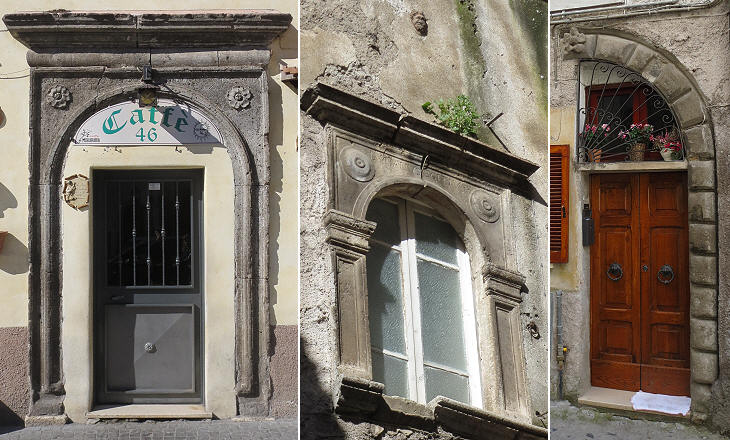 Reference to the Orsini rule over Vicovaro can be seen in several XVIth century buildings. The fiefdom however lost importance when it was inherited by the Bracciano branch of the family and this might explain why the burial chapel was not actually used as such and eventually it became a sort of annex to the parish church. Palazzo Orsini now Cenci Bolognetti: (left) entrance; (right) round tower on the back of the palace

The Orsini ruled Vicovaro until 1692 when they sold the fiefdom to the Bolognetti. The Orsini were bankrupt and the Bolognetti were one of the wealthiest families of Rome, as shown by the lavish decoration of Chiesa di Gesù e Maria in Rome, where many members of the family were buried. 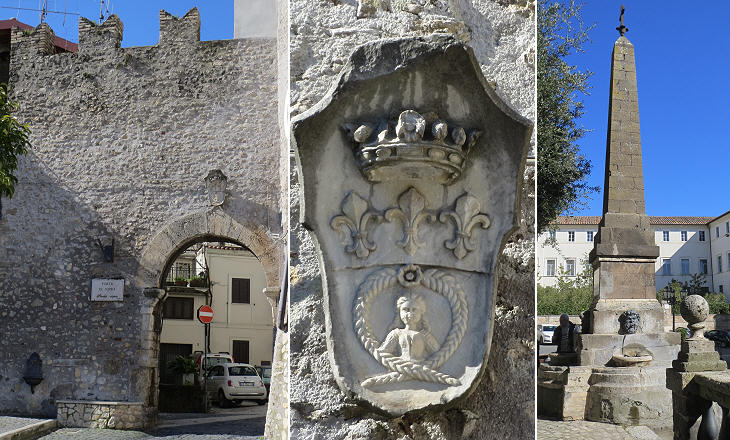 While during the final years of the Orsini rule Vicovaro was just one of their many impoverished fiefdoms, the Bolognetti were more interested in it, as Vicovaro granted them the title of princes. The family ended in 1775 with the death of Ferdinando Bolognetti; his sister Anna Maria married Virginio Cenci and their son Girolamo added the name of his mother to that of his father and became Prince of Vicovaro. 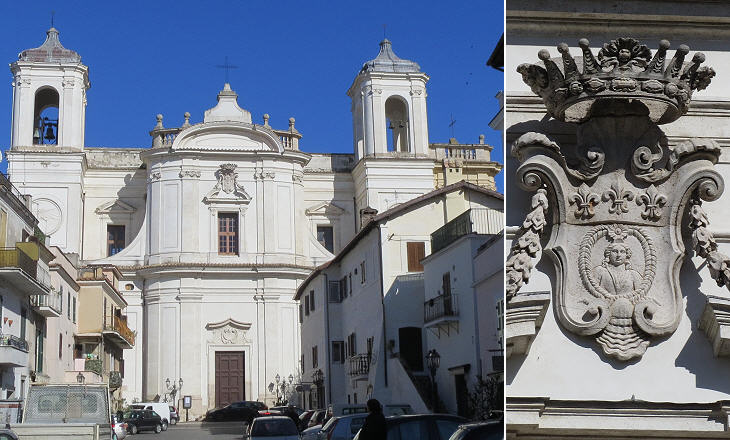 (left) S. Pietro (façade towards the town); (right) coat of arms of the Bolognetti (the projecting crown recalls the coat of arms designed by Bernini for Prince Camillo Pamphilj at S. Andrea al Quirinale)

In 1743-1755 Giacomo Bolognetti, Prince of Vicovaro, and his brother Cardinal Mario entirely rebuilt an old medieval church at the centre of the town and provided Vicovaro with a grand church which was designed by Girolamo Theodoli, Marquis of S. Vito and Earl of Ciciliano, a relative of the Bolognetti. The church has two façades: one facing the Bolognetti Palace and through which the prince and his family entered the building and another one for the people of Vicovaro. 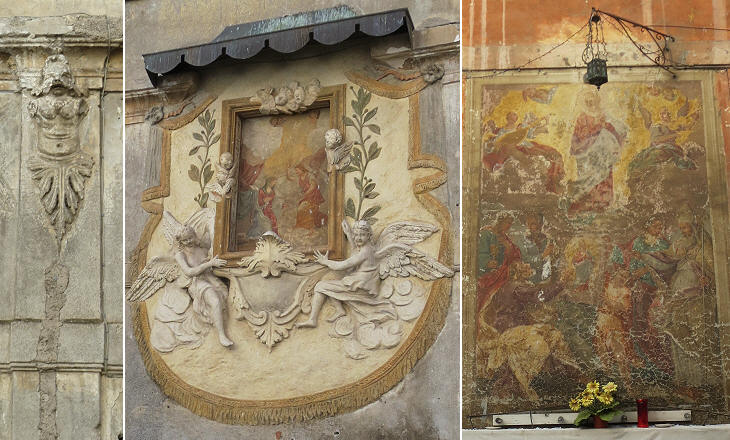 Stucco decorations and sacred images in the streets of Vicovaro

Return to Introduction and Castel Madama or move to:
Sambuci
Mandela and Roviano
Anticoli Corrado and Arsoli