- Aleppo - Ottoman Monuments
(Detail of a relief at Karatepe)

You may wish to see an introductory page to this section with a map or a page on the Citadel of Aleppo or a page on its pre-Ottoman monuments first.

In 1514 Ottoman Sultan Selim I defeated the Persian Safavids at Chaldiran and conquered their capital Tabriz; in 1516 he waged war on the Mamelukes and he entered Aleppo in triumph, welcomed by its inhabitants; he then moved southward and conquered Damascus and in the following year Egypt. 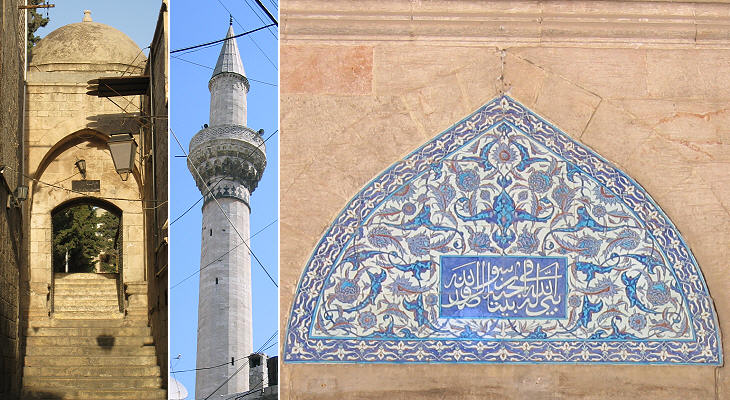 Sultan Suleiman I, Selim's son, conquered Mosul and Baghdad and during his reign the Ottoman Empire reached the Persian Gulf. Aleppo became a key trading station along the east-west and north-south routes of a large empire. Because of the help given by the inhabitants during the Ottoman conquest, the new rulers favoured the expansion of Aleppo and embellished it with new monuments such as Al-Adiliye Djami in the commercial quarter of the city. 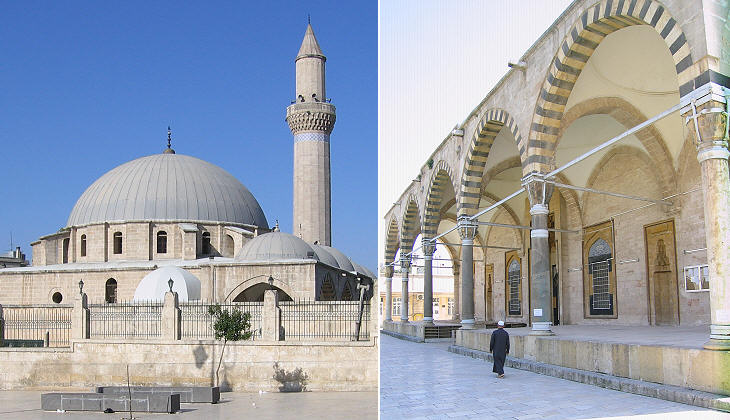 Khosrowiye Djami was the second large Ottoman complex in Aleppo; it was built near the entrance to the Citadel , the traditional seat of authority of the city; it is traditionally attributed to Mimar Sinan, the greatest Ottoman architect, although at the time the complex was built he had just been appointed supervisor of all imperial buildings. The large shallow dome and the imposing portico are typical of Ottoman architecture. 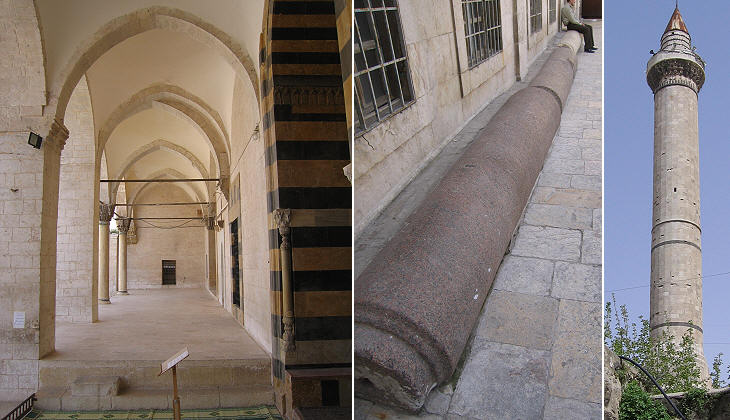 The Arabs called the Ottoman style tarz-i Rum because for them Constantinople was still a second Rome; the new buildings had also a political implication in the sense that they were a visible sign of the power of the centre of the empire; Aleppo became the capital of a large vilayet (province/region) which included several other important towns such as Antioch, Maras, Antep and Urfa. By the end of the XVIth century Aleppo was the third largest city of the empire after Constantinople and Cairo. 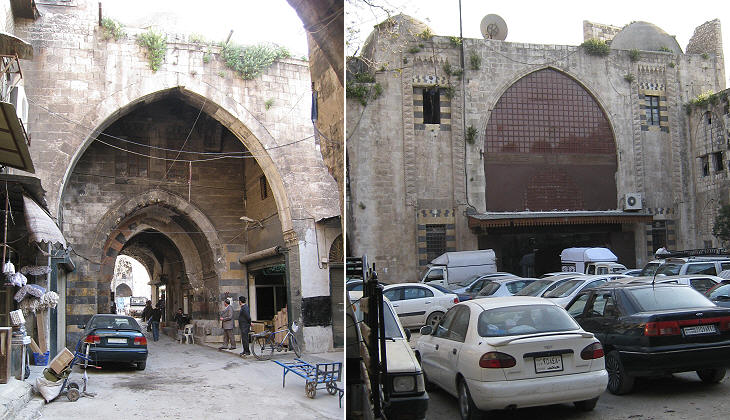 The streets and bazars, or shops, are laid out like those of Damascus; it is esteemed one of the best built cities throughout all the Turkish dominions; the houses being of hewn free stone and there are some mosques and kanes especially, which are very magnificent; several of the former having large domes to them. But the buildings are not high in proportion to the size, and the domes are raised so little above them, that they appear low and flat, though built with great expence.
Richard Pococke - A Description of the East and Some Other Countries - 1745
The Ottoman patronage in Aleppo was not limited to mosques and other religious buildings, but it was also aimed at providing the city with the facilities needed because of its commercial importance; several large khans were built for the caravans; they were specialized by trade or they belonged to the different European or Christian communities which dominated trade in the Ottoman Empire; a Venetian consul resided in one of these khans until the 1797 fall of the Republic. 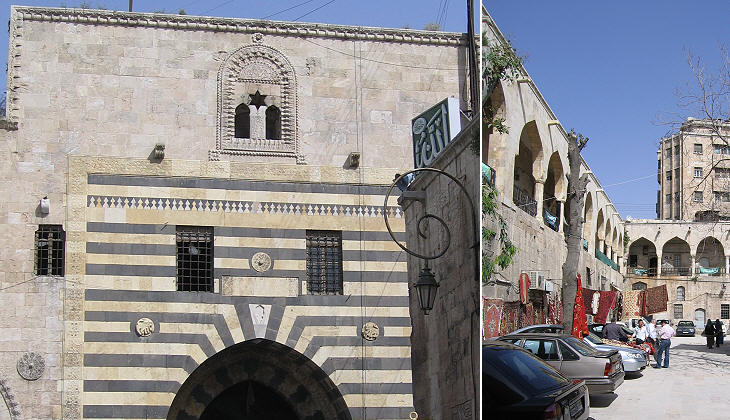 The Ottoman buildings of Aleppo were not copies of those of Constantinople; Khan al-Wazir has the structure of a traditional Ottoman khan, but its decoration reflects patterns which prevailed before the Ottoman conquest. 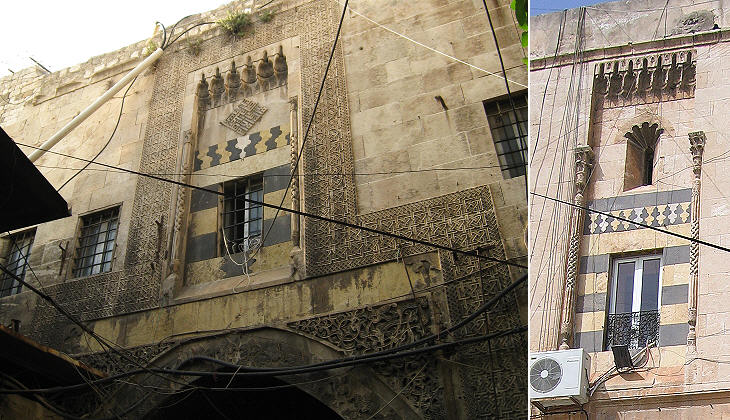 The khans are still the centre of trading in Aleppo, at least for the people who come from the hinterland of the city and who are accustomed to a traditional way of purchasing; their current usage makes it difficult to appreciate some of their architectural features; in general a section of the upper storey was reserved to the manager of the khan and its windows were decorated. 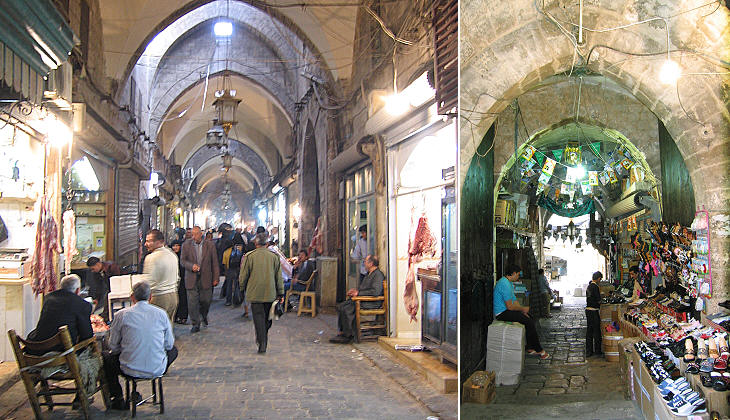 (left) The main souk; (right) a souk arranged in the entrance to a former khan

In the early XXth century the khans lost their function as stations for caravans and they were turned into warehouses and shops, thus becoming an expansion of the souks, the markets of the city which were specialized by trade; the main souk of Aleppo crosses the old city from Bab Antakya, its western gate, to the Citadel; it is a narrow covered street which receives light from openings in the domed ceilings.

The events which followed the end of WWI and chiefly the dissolution of the Ottoman Empire had a negative impact on Aleppo; not only it lost its role as the key commercial centre of a vast region, but its vilayet was greatly reduced; Mahras, Antep, Urfa and eventually also Antioch became part of the Republic of Turkey. France was given a mandate by the League of Nations to administer Syria; although Aleppo was the major city of the new country they preferred Damascus as the capital. 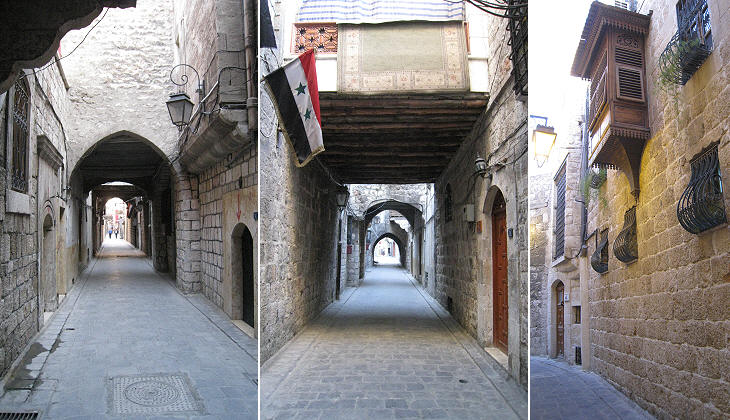 The Jews and Christians of the country live in one of the suburbs. (..) The houses being all terraced over, they can go from house to house on the top of them, where they do not think proper to make up any fence; and when they do, they frequently have doors through them; and the air of Aleppo is so fine, that the people lie on the tops of their houses during the summer season. Pococke
The Ottoman Empire dealt with the plurality of religions of its population by recognizing four millets (confessional communities) for its Muslim, Greek Orthodox, Armenian and Jewish subjects. In Jerusalem the four communities lived inside the ancient walls of the city; in other Ottoman towns such as Rhodes and Ioanina only the Jews were allowed to live inside the walls; in Aleppo the various Christian communities (the main ones being the Maronites, the Syro-Orthodox, the Syro-Catholics and the Armenians) lived in Jdeide (new town), a neighbourhood located outside the northern gate of Aleppo; the gate was called Bab al-Yahoud, the Gate of the Jews, because the Jews lived nearby but inside the walls.
Jdeide has retained several historic houses and it is still largely inhabited by Christians, although the wealthiest ones live today in the quarter of Al-Aziziah.
After the events of 1948 the Jews left the country and their synagogue was greatly damaged; Bab al-Yahoud was renamed Bab an-Nasr (Victory Gate); the actual gate does not exist any longer. 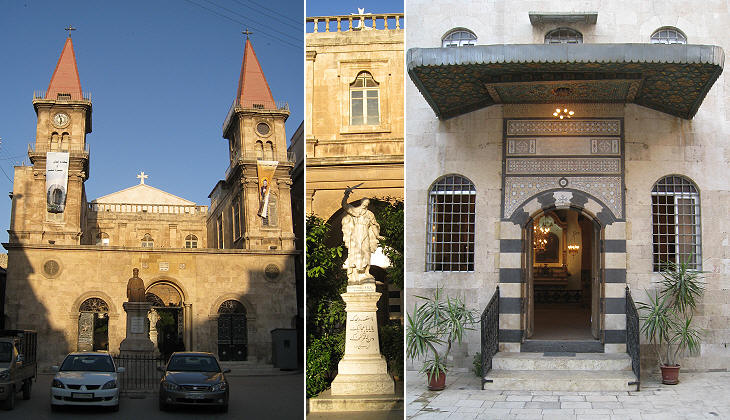 The Armenians, Greeks, Syrians, and Maronites, have each a church in Aleppo, which are all in the same quarter of the town. The Armenians and Greeks have a bishop in this city. Pococke
In the XIXth century the Ottoman government lifted restrictions on the size and outer appearance of non-Muslim halls of prayer; the Christian communities built large new churches, some of which were based on western patterns, whereas others followed the local tradition. 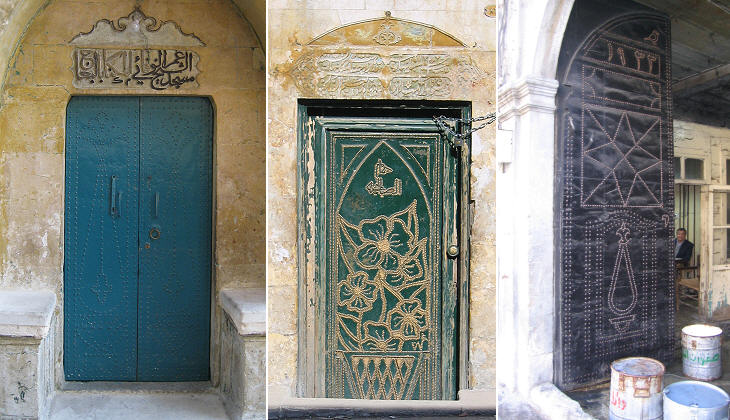 The image used as background for this page shows an inscription on glazed tiles in Khosrowiye Djami.