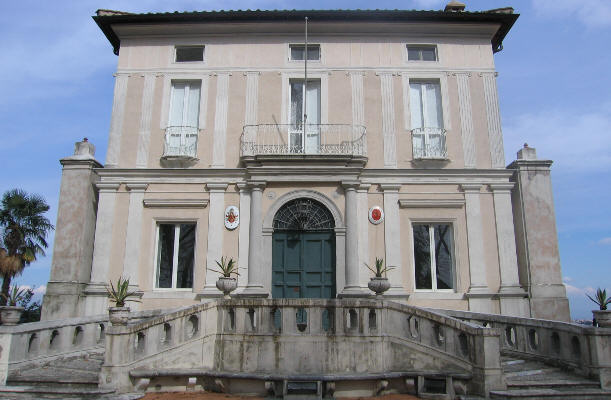 Villa Lante is a late Renaissance building on the Janiculum hill overlooking Rome. It is located at a short distance from the point where Giuseppe Vasi sat in 1765 to draw his Grand View of Rome. 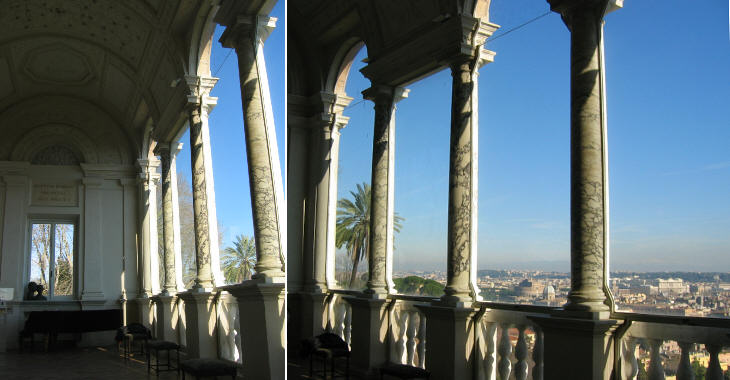 Today the building belongs to the Finnish Institute of Culture and it also serves as the Embassy of Finland to the Holy See. An inscription by Martial (Epigrammes, Book 4, 64, 11-12) decorates its elegant loggia: Hinc septem dominos videre montis et totam licet aestimare Romam (from this point you can see the seven hills and appreciate Rome in its entirety). Giuseppe Vasi placed the same inscription in his View (you can see it in the image used as background for this page), but perhaps Martial was referring to Monte Mario.

One does not need to be a guest of the Finnish Ambassador to enjoy the view because to the north side of the building there is a terrace open to the public. The view is not as ample as that drawn by Vasi, because the engraver forced the laws of perspective and included in his view monuments which were outside his actual field of vision. He also "deleted" some trees which interrupted the continuity of the view.
The image above covers the far left part of the view from the terrace near Villa Lante: it shows Monte Soratte, a landmark of most views of Rome; the large white building is la Farnesina (Italian Ministry for Foreign Affairs). The monument to the far left is a lighthouse donated by the Italians from Argentina for the fiftieth anniversary of Italian Unity (1911).

April 1822. We spent half an hour in the gardens of the Villa Lanti, on the Monte Gianicolo. The view of Rome from these gardens is superb: though the sky was clouded, the atmosphere was perfectly pure and clear: the eye took in the whole extent of ancient and modern Rome; beyond it the Campagna, the Alban Hills, and the Appenines, which appeared of a deep purple, with pale clouds floating over their summits. The city lay at our feet, silent, and clothed with the day-light as with a garment, no smoke, no vapour, no sound, no motion, no sign of life: it looked like a city whose inhabitants had been suddenly petrified, or smitten by a destroying angel; and such was the effect of its strange and solemn beauty, that before I was aware, I felt my eyes fill with tears as I looked upon it.
Anna Jameson - Diary of an Ennuyée - 1826
The image above was taken from a slightly different point of view and it shows the far right part of the view: the Aventine Hill with S. Sabina and nearby Giardino degli Aranci: in the far distance Frascati and the Alban Hills.

You can see this view in a 9,250x820 image (1.8MB). The image is accompanied by a second one of the same size which highlights the main monuments and has links to pages showing them.