You may wish to read an introduction to this section or a page on the town first. 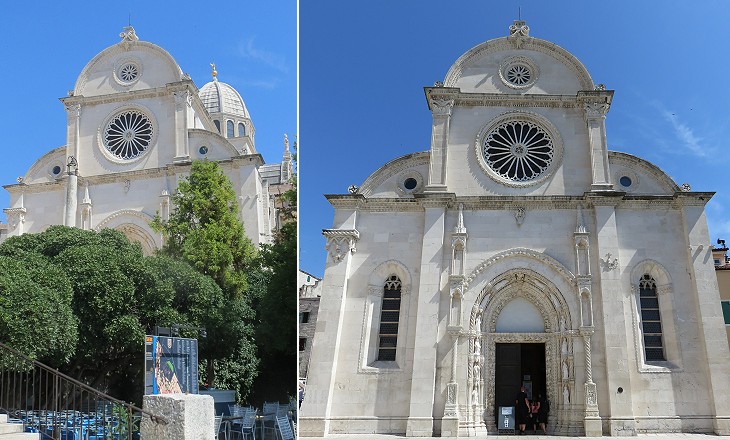 In 1298 Sebenico, which had been till then in the diocese of Traù, was raised to the dignity of an episcopal see by Pope Boniface VIII. In 1402 the Bishop and a council of noblemen decided ac pro amplianda et crescenda et augmentanda dicta ecclesia quae ad praesens non est sufficiens in tanta civitate propter parvitatem et incongruitatem suam, i.e. to enlarge and embellish the existing cathedral which was no longer suited to the importance of the city, because of its size and aspect. A tax was levied on the production of wine to accumulate funds. Nothing happened however until 1430 when a new decision of the council, chaired by the Venetian governor of the town, actually led to laying the first stone of the building which coexisted with the old one for more than a century. 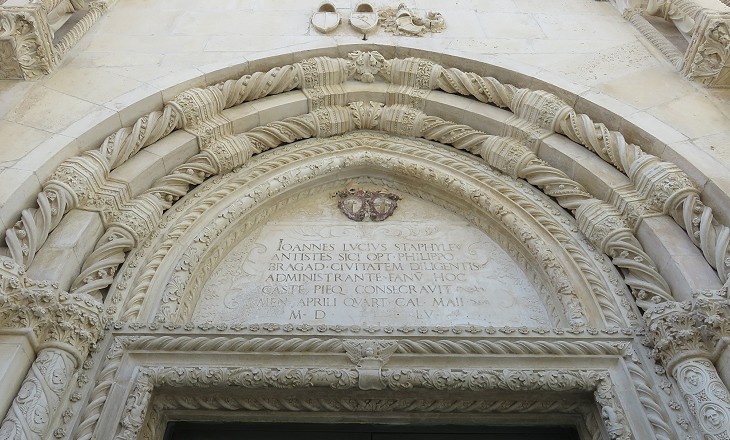 Portal of the façade

The inscription on the portal indicates that the Cathedral was consecrated in 1555, 124 years after the first stone was laid. Its construction can be divided into four phases:
a) 1431-1441 during which works were supervised by Venetian master masons (Antonio di Paolo, Francesco di Giacomo and others). The basic layout of the building, the two portals and the side walls up to the cornice were completed during this phase;
b) 1441-1475 the council supervising the construction called in Giorgio Orsini (aka Giorgio di Matteo), a native of Zara, another port of Dalmatia, who was working in Venice where he had married. He built the apses and most likely designed the dome and the vault of the main nave. Because of lack of funds construction was repeatedly halted and Giorgio Orsini accepted commissions from Spalato, Ancona and other towns;
c) 1475-1505 Niccolò Fiorentino completed the Cathedral by building the dome and covering the main nave; at the same time he worked on the Loggia of Traù;
d) 1505-1555 a series of minor modifications/embellishments, e.g. the rose window of the main façade, were made by other architects. 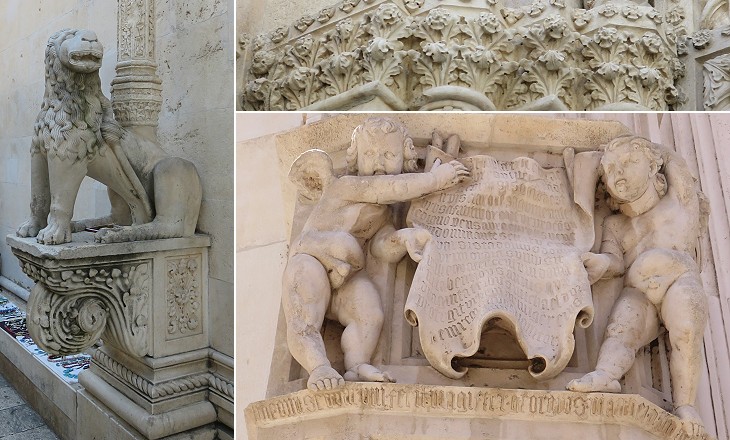 The northern or 'Lion doorway', as the people call it from the two lions that guard the entrance, is of very beautiful Italian Gothic, the leaves that run round it are undercut and pierced behind, and the columns are delicately arabesqued, or else twisted and fluted with rosettes set in the flutings. (..) Though this doorway is evidently from its style part of Antonio's work it appears from three escutcheons over it that the wall above, though it follows his design, was not finished till about 1454, after he had ceased to be architect.
Sir Thomas Graham Jackson - Dalmatia, the Quarnero and Istria - 1887
Sir Thomas Graham Jackson (1835-1924) was one of the leading architects of his time. He visited Sebenico in 1885 and he wrote a very detailed account of the Cathedral, which today is very useful to identify the restorations made in the XIXth century. 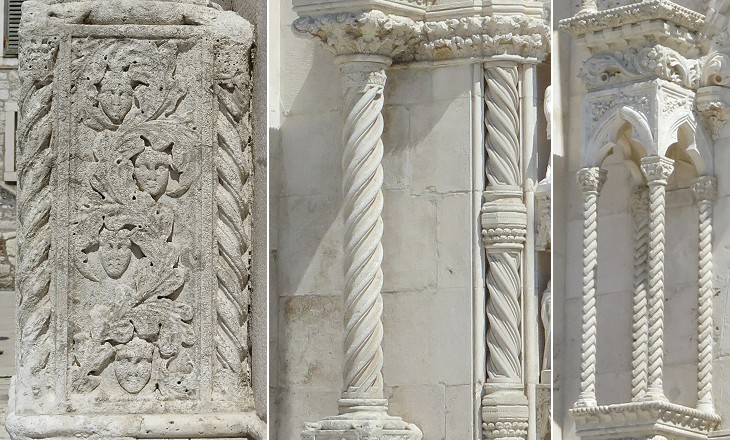 Portal of the façade - details

The west doorway is in the same style but still richer than the other. On each side of the opening a column carries a two-storied tabernacle: figures in niches run round the arch and are continued down the jambs. (..) The opening of the doorway is surrounded by a border of very bold Venetian foliage springing from naked figures, and the shafts are twisted and fluted, or else richly arabesqued. T. G. Jackson 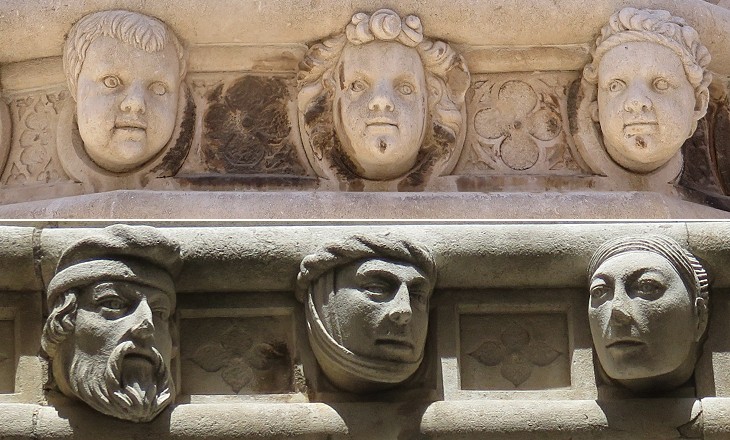 Gothic architecture had but a short reign in Dalmatia; it was adopted very late, and abandoned very early for the Renaissance, a style for which the Dalmatians showed a natural and almost precocious liking. Its introduction is due to Giorgio Orsini, or Giorgio Dalmatico as his admiring countrymen like to style him, the scion of a Zaratine family which claimed descent from the princely Roman house, and an architect of original genius who may fairly be styled the Brunelleschi of Dalmatia. In 1441 he was entrusted with the completion of the duomo of Sebenico, which had been begun by another architect in a style of very good Italian Gothic. Giorgio at once threw over the plans of his predecessor, and built the apses in a picturesque variety of the early style. T. G. Jackson In the centre over the crossing a low square tower is raised till it surpasses the height of the four abutting roofs, when it turns into an octagonal lantern covered by an octagonal cupola which rises to a point, the whole constructed of slabs of stone like the nave vaults, and crowned by a gyrating angel. The construction of this central part and of the vaults throughout is wonderfully light, and indeed perilously so. The whole depends, it need hardly be said, on iron ties, for there are no external buttresses to resist the thrust of the vault, nor indeed is it possible to buttress a barrel vault. The architect has gone to the verge of over daring; his lantern is all window, having two large windows in each face; and the four piers that support the central lantern and cupola are astonishingly slender. (..) The daring of the design, however, has been partially justified by the stability of its construction down almost to our own days. Unhappily in 1843 symptoms of clanger had appeared, owing perhaps more to the disintegration of the stone of which the building was constructed than to any fault of design. Under the direction of Signor Paolo Bioni, an architect of Sebenico, the whole of the nave vault was taken down and reset, and a good deal of it replaced by new stone, the grooved joints being made good with cement, instead of as heretofore with lead. The cupola also was taken down to the top of the four supporting arches and rebuilt. T. G. Jackson 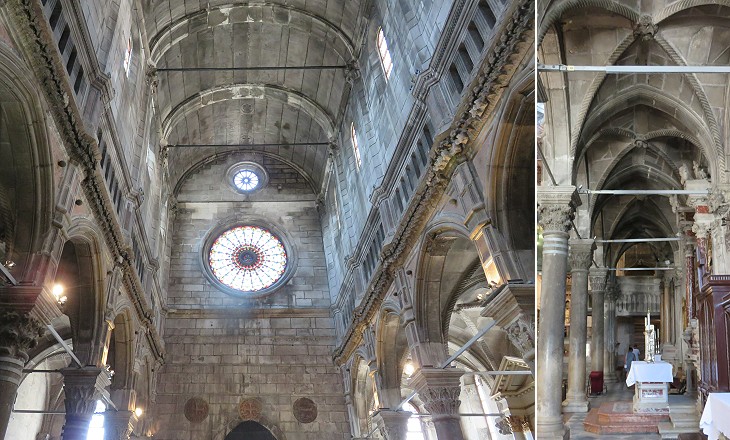 (left) Ceiling of the main nave; (right) side nave

The duomo is worthy to rank with any Italian work of its date and class that I know, and though there are churches as beautiful on the other side of the Adriatic, it would be difficult to match it in singularity of construction. Indeed not only Italy but Europe may be challenged to show another church of this size in which neither timber nor brick is employed, everything being constructed of good squared stone, marble, and metal. (..) The whole of the great cruciform church is covered by a waggon roof of stone, the underside of which forms the ceiling, the stone covering being visible both internally and externally, without the outside roof of timber and tiles or lead which exists in ordinary cathedrals above the stone-vaulted ceiling. The effect both within and without of these simple waggon vaults over nave choir and transepts, interrupted only by a dome at the crossing, is very simple and imposing, and the design is not less successful architecturally than it is original. (..) The proportions of the nave arcades of the interior are singularly pleasing. They (..) are so proportioned as to look fully as large as they are, and to give full effect to the length of the nave, and the arches are well moulded and handsomely finished. T. G. Jackson 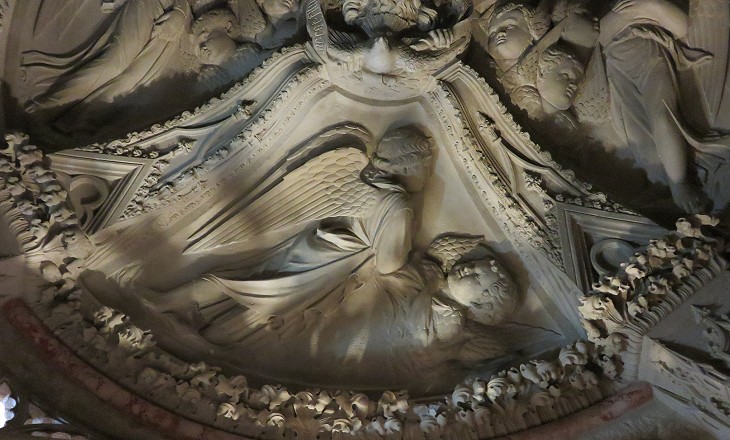 Ceiling of the Baptistery

The most sumptuous part of Giorgio's building is the little baptistery, occupying a lower story in the southern apse below the raised tribune of the south transept. (..) The ceiling is gathered into a circle of Venetian foliage on which rests the flat dome, divided into four segments by ribs from the four angle columns and niches. These segments are filled with angels in a classic style with flowing draperies of good but unequal design. In the centre is a boss, with the figure of the first person of the Trinity holding a scroll bearing the words "Hic est filius meus dilectus in quo mihi bene complacui ipsum audite"(*), and the dove with outspread wings. The whole of this tiny chamber is a marvel of richness. T. G. Jackson
(*) This is my Beloved Son in Whom I am well pleased, hear ye Him. [Mat. 17:5] 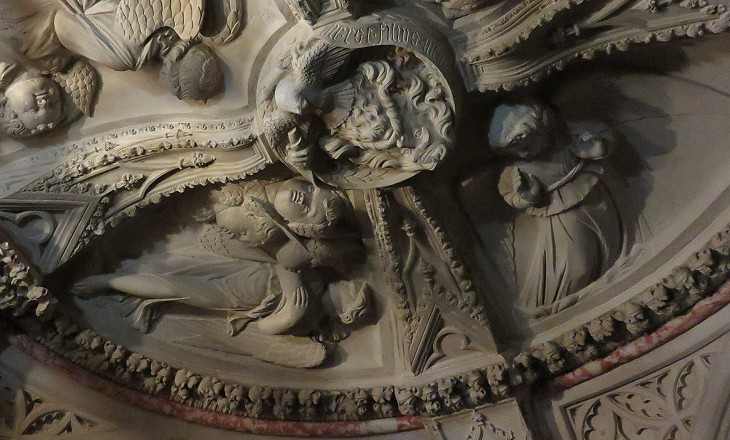 Ceiling of the Baptistery

In 2000 UNESCO inscribed the Cathedral in their World Heritage List on the following grounds: The Cathedral of St. James in ibenik (1431-1535), on the Dalmatian coast, bears witness to the considerable exchanges in the field of monumental arts between Northern Italy, Dalmatia and Tuscany in the 15th and 16th centuries. The three architects who succeeded one another in the construction of the Cathedral - Francesco di Giacomo, Georgius Mathei Dalmaticus (aka Giorgio Orsini) and Niccolò di Giovanni Fiorentino - developed a structure built entirely from stone and using unique construction techniques for the vaulting and the dome of the Cathedral. The form and the decorative elements of the Cathedral, such as a remarkable frieze decorated with 71 sculptured faces of men, women, and children, also illustrate the successful fusion of Gothic and Renaissance art. 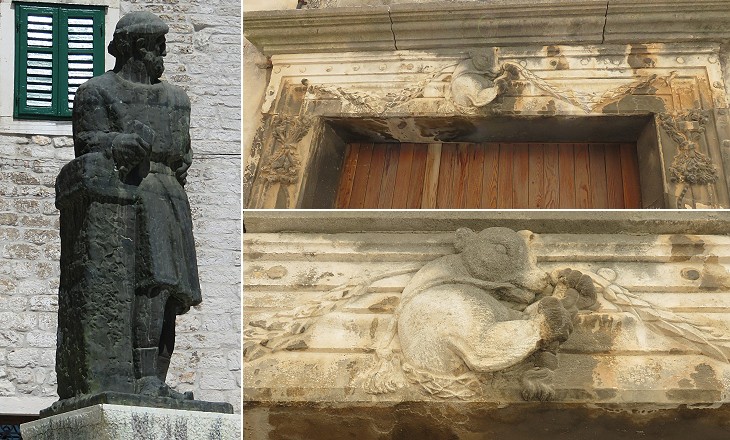 (left) Monument to Juraj Dalmatinac (aka Giorgio Orsini) by Ivan Mestrovic (1883-1962) opposite the Cathedral; (right) lintel of Orsini's house

He was highly honoured by his fellow-citizens and entrusted by them with an embassy to Rome, and in the old quarter of Sebenico may still be seen the doorway of the house he built for himself, with the bear of Orsini on the lintel, and the mallet and chisel of his sculptor's craft on the door-posts surrounded by clusters of flowers. T. G. Jackson
With all respect for the talent of Ivan Mestrovic, I doubt Giorgio Orsini would have been pleased with the statue portraying him. In his works Orsini showed how he mastered his craft and was able to depict the clasp of a belt or an embroidered cloth (see a statue he made at Ancona). He would have thought Mestrovic did not have time to finish his work. 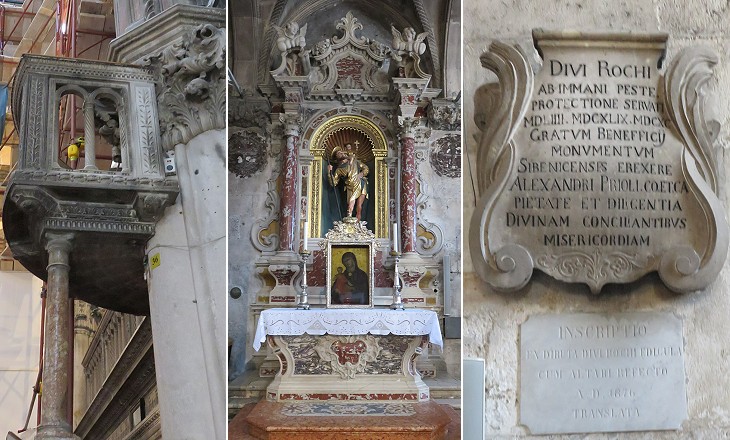