- Clissa
(a sphinx at Diocletian's Mausoleum) 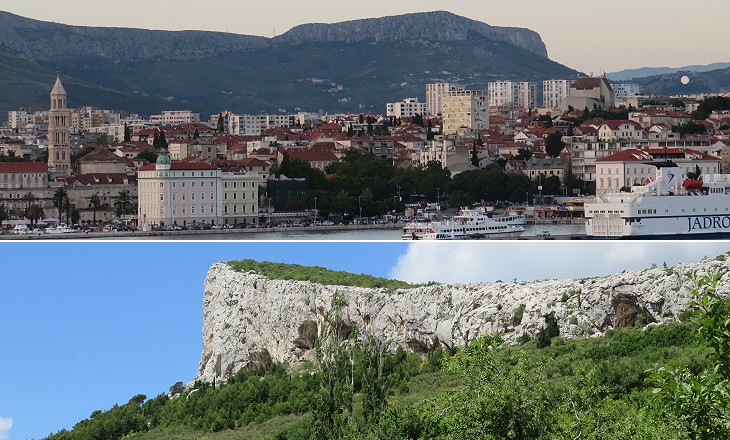 As the steamer rounds the long island of Bua the traveller will look eagerly for the first view of Diocletian's home. While the town is still hidden by the island it can be seen that the natural beauties of the situation are considerable. The higher mountains once more approach the shore, and straight in front rises the grand mass of Monte Mossor, bare and craggy.
Sir Thomas Graham Jackson (1835-1924), one of the leading architects of his time - Dalmatia, the Quarnero and Istria - 1887 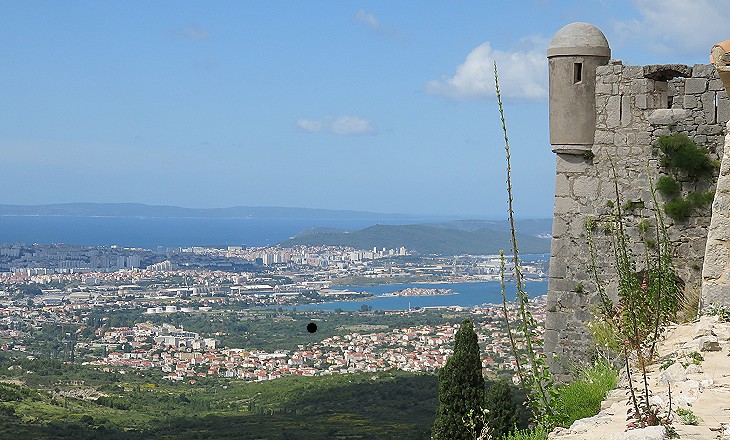 Clissa: view towards Spalato and the ruins of ancient Salona (black dot)

The mountains had a threatening aspect for the XVI-XVIIth century inhabitants of Spalato, because they were occupied by the Ottomans who could almost watch what was going on in the harbour of Spalato from their fortress at Clissa. When in 1420 the Venetians bought a string of ports along the coast of Dalmatia, they had no interest whatsoever in the inner parts of the country, which were conquered by the Ottomans in the early XVIth century. In 1538 and 1571 the Ottomans launched attacks on Spalato, but were unable to conquer the town. 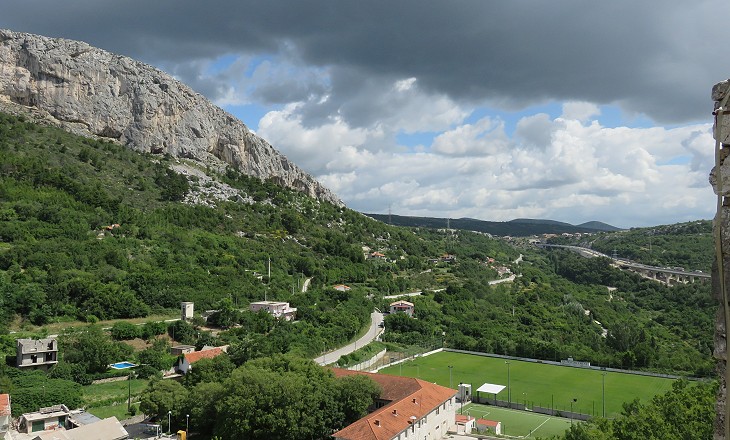 Clissa controlled the road which led from the coast to today's Bosnia-Herzegovina, one of the nations into which the former Socialist Federal Republic of Yugoslavia split in 1992. Clissa was the capital of a small sanjak (province) of the eyalet of Bosnia, a major division of the Ottoman Empire until 1908 when it was annexed by the Austro-Hungarian Empire. 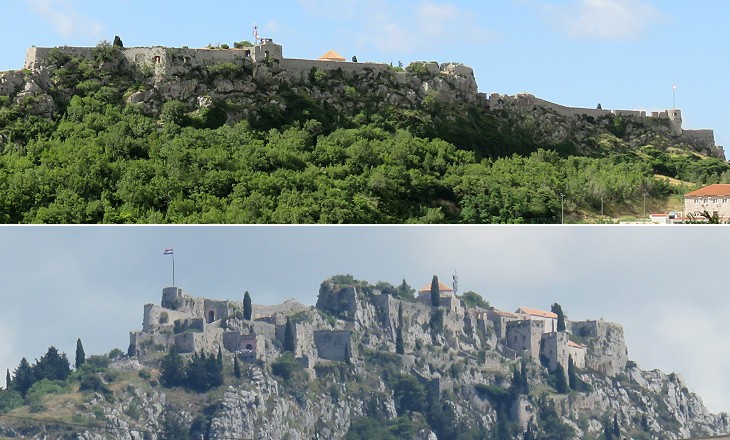 (July 1675) Clissa is a very strong Fort, and that more by Nature than Art. The situation is upon a long Rock, made in the fashion of a Gally; of which the Governours Lodgings at the North-end are the Poupe: It stands just in the middle of the passage between the Mountains, whose height and precipices are such, as leaveth no other entrance into the Inland-parts from the Peninsula, but this. And this is so narrow, that not a man, or horse, can pass by without the License of the Castle.
A journey into Greece by George Wheler, Esq., in company of Dr. Spon of Lyons - 1682
The fortress was situated on a veritable eagle's nest as it was protected by a deep ravine which surrounded it on all sides. The Ottomans believed it was impregnable and yet its defenders surrendered it to the Venetians in 1648, during the War of Candia. It was a major strategic loss for the Ottomans who repeatedly tried to recover the fortress during peace negotiations, but the Venetians held on to their new possession even though they ceded Candia in 1669. 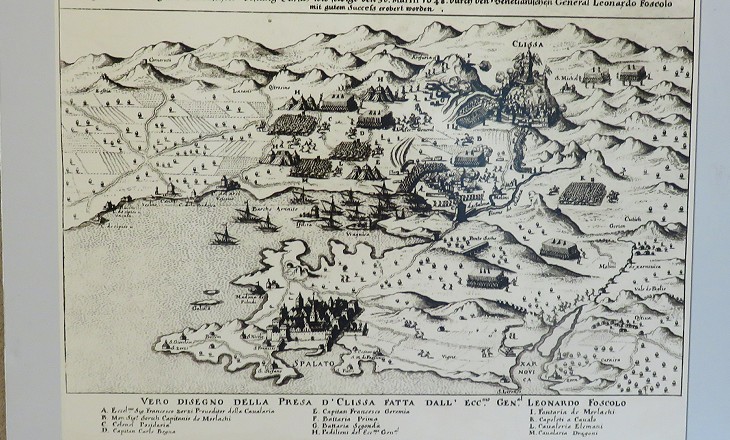 It was taken from the Turks by the Venetians, under the Conduct of Signior Foscolo, who was then Proveditor of Dalmatia; and that as much by an accident, as by the vigorous assaults that were made against it. For after a long and fruitless expectance of Succours, and their Provisions failing, the Turks were frighted into a Capitulation, by a Granado, that fell upon the Mosque, whilest they were at their Devotions, and did such mischief as quite discouraged them from holding out any longer. They therefore surrendred on condition of free passage with bag and baggage; which although granted by the Commander, yet was of little use to them. For the Morlachs, their inveterate enemies way-laid them in their passage, and cut all their throats, without his knowledge. Wheler
The Venetians employed mercenary troops and for the attack on Salona they hired Morlachs, shepherds who lived on the mountains of Dalmatia. 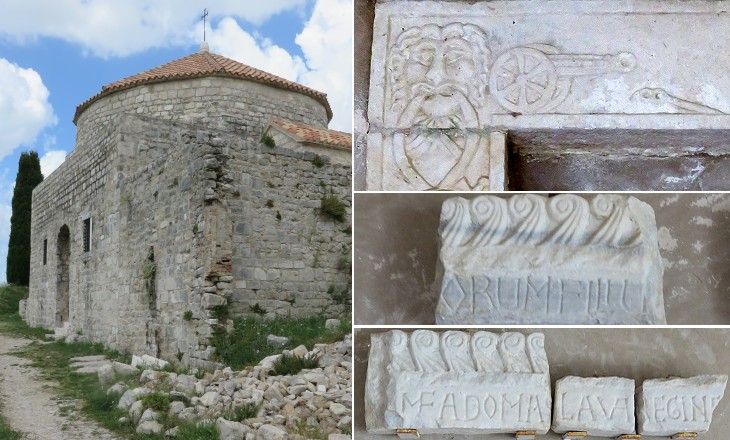 (left) Church; (right) fragments of its Venetian decoration in the interior

Since the Venetians had it, they have blown up part of the Rock on the Northside, to make it yet more unaccessible. Other Walls it hath none, but the Rocks, and some few Mounds of Earth, without any regularity. (..) A Bow-shot from hence, Northwards, we entred the Grand Signiors (Sultan's) Dominions. There are two Companies of Foot, and half a Troop of Horse that guard this Castle. But the greatest part of these commonly quarter at Spalatro, now they have Peace; only a sufficient number is left here to keep Guard. Wheler
The Ottoman mosque was turned into a small church and its adjoining minaret was torn down. In the bare interior some fragments of the Venetian decoration can still be found. One of them clearly refers to the military nature of the site. 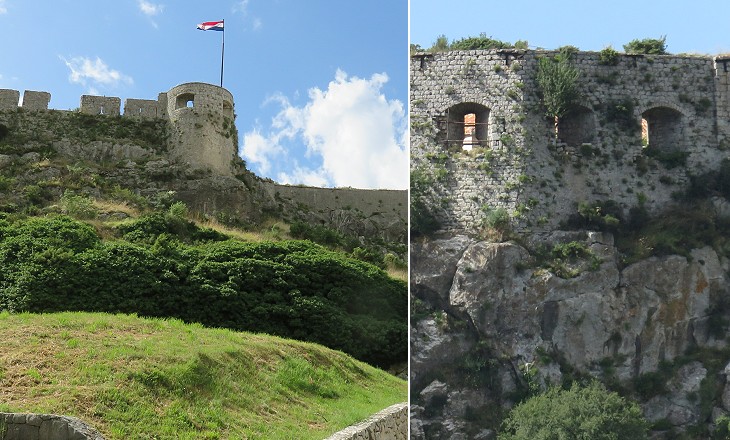 Eastern side (the flag is that of the Republic of Croatia)

The eastern side of the fortress appears to have been modified after 1648 in order to place more cannon there. Clissa however lost much of its military importance after the Venetians seized some inland towns (e.g. Sinj, Knin and Imotsky) during the wars which ended in 1699 and 1718. By these conquests the territory of Dalmatia greatly increased and its population was no longer made up of only the urban communities along the coast who had a long tradition of economic and cultural links with Venice, but included also Slav peasants and shepherds who spoke Serbo-Croatian.
In the XIXth century when nationalism became rampant in Europe, all components of the population of Dalmatia stressed their ethnic/religious origin and identified themselves with the Italian, Croatian or Serbian nations. Almost all of the "Italophiles" left Dalmatia by 1945 as a consequence of WWII. The "Serbophiles" did so in 1995 after their attempt to establish an independent republic failed. 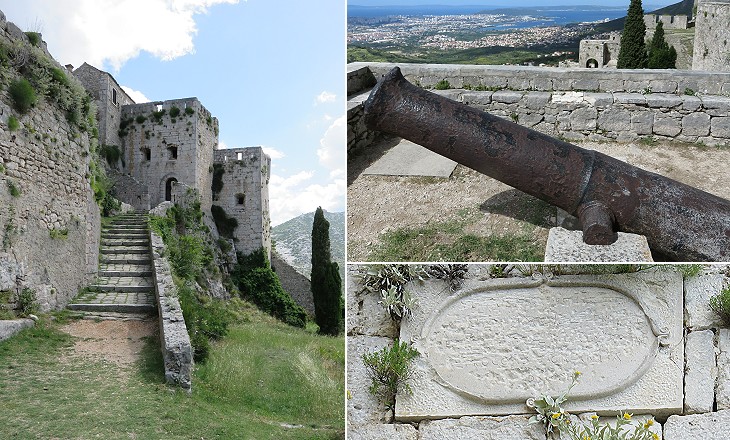 (left) Residence of the Venetian governor and of his officers; (right-above) a cannon; (right-below) an erased Venetian inscription

Clissa continued to be used as a fortress/prison until WWII. It is now open to the public and it houses a small museum with copies of some interesting etchings. Sadly all Venetian inscriptions and coats of arms have been removed or erased.