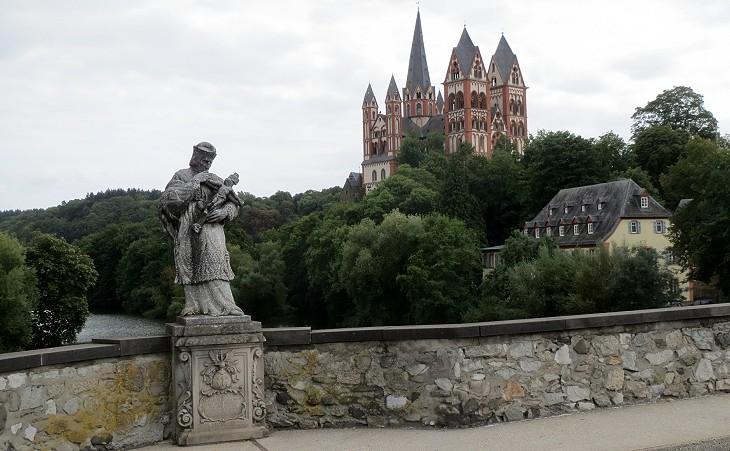 View of the Cathedral from the Old Bridge over the Lahn with a statue of St. John Nepomuk, patron saint of those at risk of drowning (see other statues of him on bridges at Prague and Rome and reliefs in Vienna)

Limburg, a very ancient town on the Lahn. The superb Cathedral of St. George towers pre-eminently above the other buildings. (..) The views of the winding Lahn from this church and from the picturesque bridge, and that of the church itself from a mill on the bank of the river, are very fine.
John Murray - A Hand-book for Travellers on the Continent - 1838
This cathedral stands on a precipitous rock on the left bank of the Lahn, and being lofty in proportion to its length which is unusually small, has the appearance of a vast irregular tower varied with turrets and pinnacles.
Rev. John Louis Petit - Remarks on Church Architecture - 1841
Easy of access as it is, I believe few places of equal interest are so little visited as Limburg in the old Duchy of Nassau, now Royal Prussia. (..) A railway journey of little more than two hours from Coblenz up the picturesque valley of the Lahn, involves but slight fatigue or expense, and will amply repay both the lover of the picturesque and the archaeologist.
George R. Mackarness - The Ecclesiologist - 1868 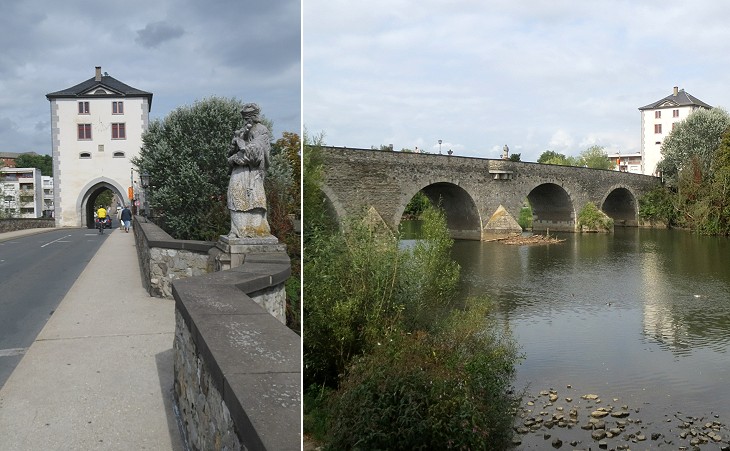 The Lahn is a small right tributary of the River Rhine. In antiquity its lower valley was occupied by the Romans, while the upper one was controlled by German tribes. Limburg is not recorded as a Roman settlement and the site developed in the VIIIth century on a hill near a wooden bridge over the river. The bridge was replaced by a stone one in 1315. The access to the bridge was protected by a tower which was built approximately at the same time. The toll merchants had to pay to cross the bridge was one of the main revenues of the town. 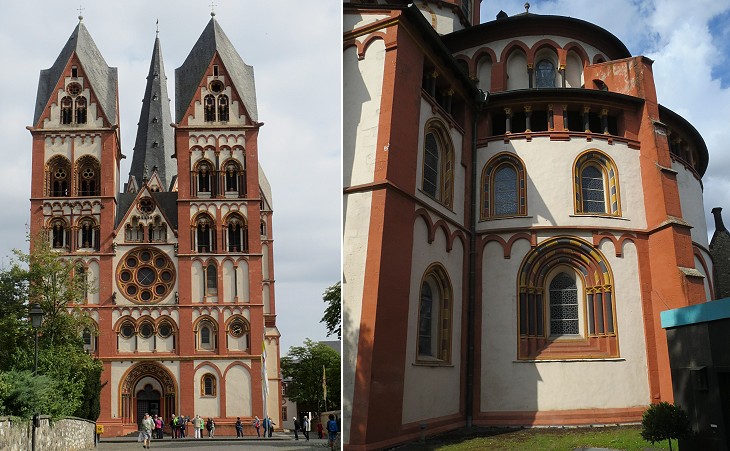 It was originally founded 909, but the existing edifice is not older than the end of the XIIth or beginning of the XIIIth century. Its architecture is particularly interesting, as it exhibits the latest character of the Byzantine style, mixed with the commencement of the pointed Gothic. Murray
The position of the Cathedral on a rock rather than in the city centre is due to its origins as a castle chapel dedicated to St. George. The original castle chapel was torn down and a three-aisled basilica was built in its place. The foundations of this basilica have been found beneath the present floor. Construction on the Collegiate Church of St. George and St. Nicholas began around 1190; it was consecrated in 1235. 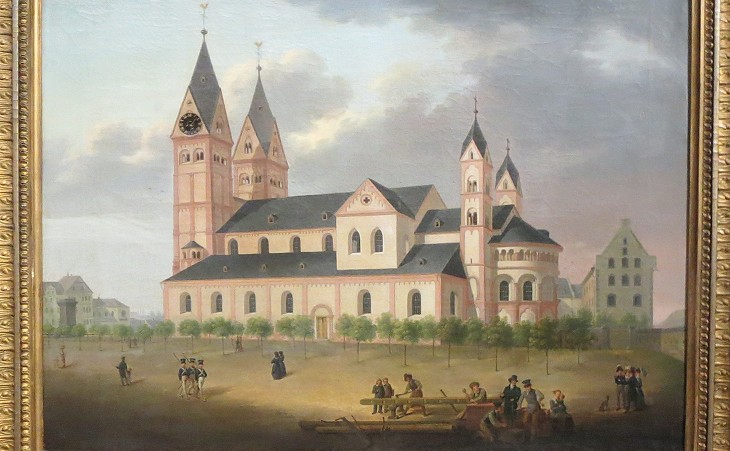 Mittelrhein Museum of Koblenz: St. Kastor's at Koblenz in an early XIXth century painting; this Romanesque church, which is very similar to the Cathedral of Limburg, was heavily damaged during WWII

While in other countries the Romanesque features faded gradually away before the new style of architecture, Rhenish Germany clung to them to the last, and abandoned them with manifest reluctance as if that mighty river, that bore the tide of Roman civilisation into the heart of Europe, had infused into the nations through which it flowed a veneration of Roman memorials, with a wish to preserve and perpetuate them, by establishing according to the principles of their construction, a kindred and lasting style of their own. Petit
Reverend John Louis Petit (1801-1868) was a topographical watercolourist, and one of the leading writers and speakers about ecclesiastical architecture, a hotly debated subject in the XIXth century. He opposed the dogmas of the Gothic Revival and advocated careful preservation of all medieval buildings without innovative restoration. 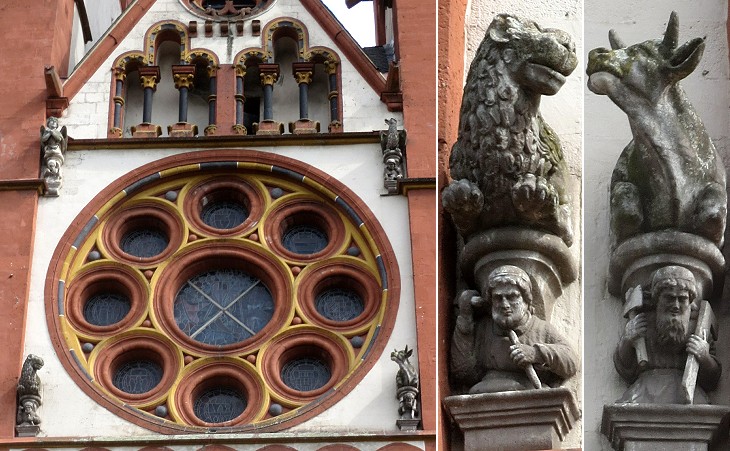 Cathedral: (left) rose-window; (right) details of the symbols of the Evangelists and of the local guilds

During the XIVth century Limburg became a possession of the Archbishop-Elector of Trier. After the Napoleonic Wars it was assigned to the Duchy of Nassau. In 1827 Limburg became a bishopric see and soon after the Cathedral was painted in blue and orange, the heraldic colours of the Duke of Nassau. These were replaced by red, white and yellow in the last restoration in 1965-1990. The choice of these colours was based on traces of old paint found on the walls and on other churches erected at the same time (e.g. St. Kastor's). The small medieval statues with the symbols of the Evangelists were spared being repainted, with an overall confusing effect on the viewer. The design of the rose window is unusual, because the central opening is supported by eight small round windows, rather than by tracery, but it can be seen in the Cathedral of Laon. 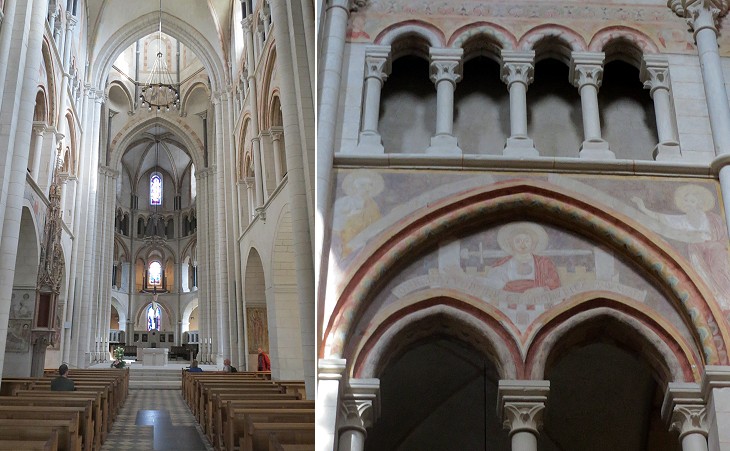 As we diverge to some distance from the Rhine, the Gothic style strikes us, as having made a more regular progress. The cathedral of Limburg on the Lahn is a fine instance. The outside still retains some Romanesque features, but the interior has many in common with our best Early English. The piers indeed are square and the archivolts of the pier arches which are pointed are plain and flat. The triforium above consists of large arches subdivided by shafts into smaller ones. A second triforium over this is formed by an arcade against the wall and above is the clerestory of plain pointed windows. Petit 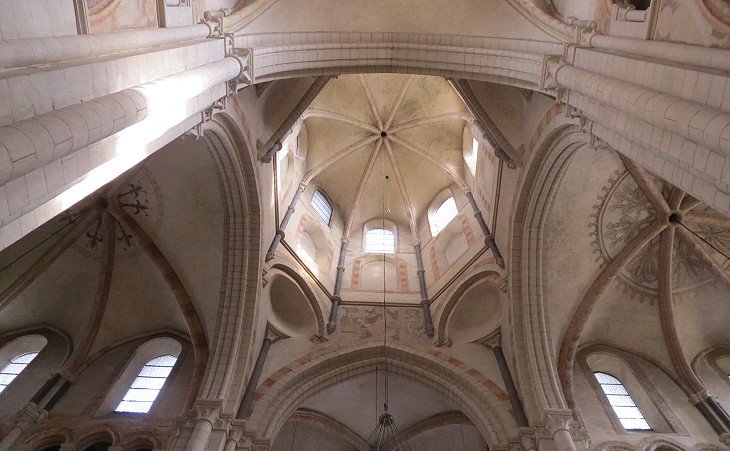 Galleries or triforia produce a very striking effect in the interior, running as they do round the whole building. At the back of the triforium in the nave, there is a complete story of the most spacious dimensions with vaulted ceilings. Mackarness 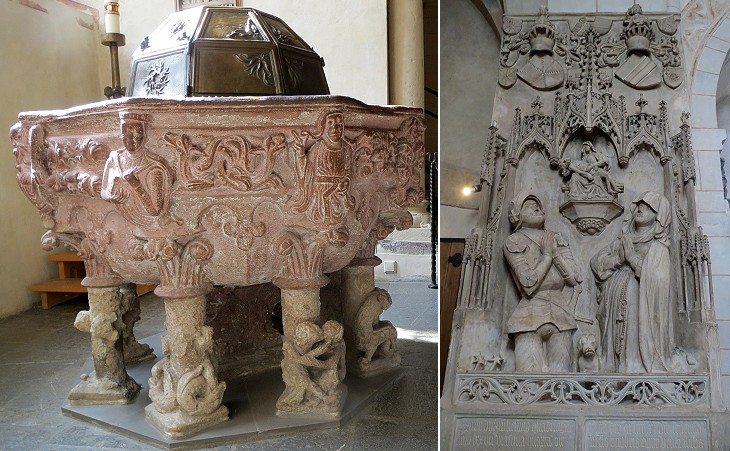 The whole interior has been sadly neglected and the fittings of the church are of the meanest kind, a fine recumbent stone figure being in one instance concealed by a painted deal cover. There is however a magnificent stone font eight sided and supported by eight pillars very much enriched with carving. Mackarness
The interior was destroyed during the Thirty Years' War (1618-48) and reconstructed in a late Baroque style in 1749. The Baroque renovation was in turn removed in the XIXth century. The baptismal font has a very elaborate Romanesque decoration which depicts allegories of the virtues and, below, made of limestone, the vices. The church must have housed many decorated gravestones of which only one survived to our days. 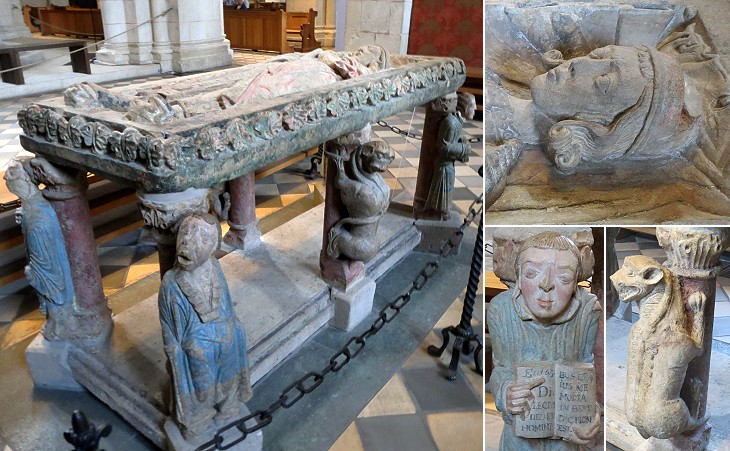 Cathedral: (left) Tomb of Konrad Kurzbold; (right) details with a quotation from Eccl. 45 "Dilectus Deo et hominibus Moyses, cujus memoria in benedictione est" (Moses was beloved by God and men. The remembrance of him is a blessing)

The tomb of Konrad Kurzbold, founder of the original church in 909, consists of two parts which were made many years after his death. The relief which portrays him is dated XIIIth century and it is supported by six sculptured columns of the XIth century. In 939 Kurzbold fought at the Battle of Andernach between the followers and the opponents of King Otto I of Germany. It ended with the defeat of the rebels and the death of their leaders and Kurzbold was rewarded by Otto with privileges for the church. 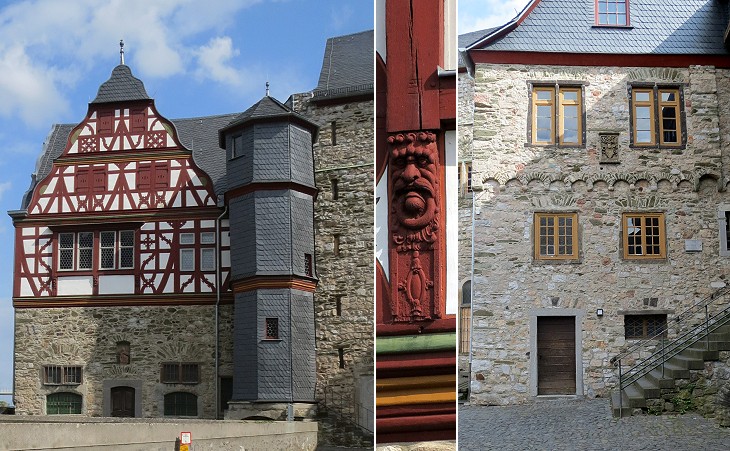 The castle is located at the back of the Cathedral and it was the residence of the heirs of Kurzbold and of the canons of the Collegiate Church. Over the centuries it was enlarged with the addition of towers and courtyards. During the rule of the Archbishop-Electors of Trier it served as administrative centre for the town and the nearby territories of the Electorate. In the late XIXth century it housed a school and in 1929 it was damaged by fire. In recent years restorations have enhanced the medieval features of the complex. 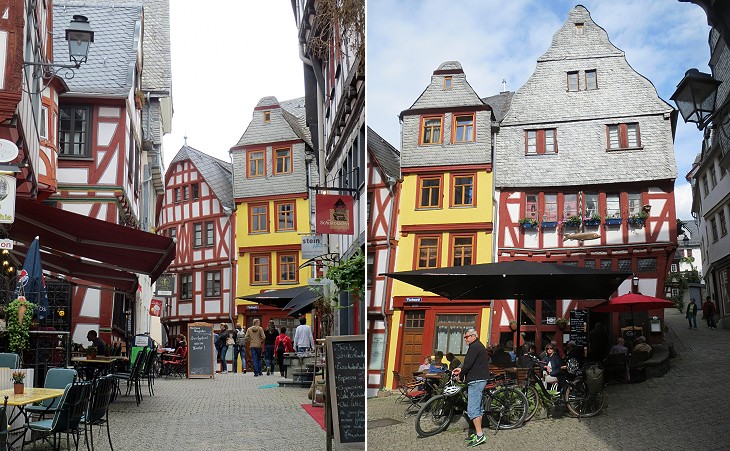 Views of Fishmarkt, a busy square in the centre of the town

Limburg did not suffer the extensive damage caused by bombings which almost all German towns endured during WWII. Its old timber houses are not modern buildings with traditional façades, as those one can see in many other locations of the same region (e.g. at Mainz). You may wish to see some interesting historical houses at Le Mans. 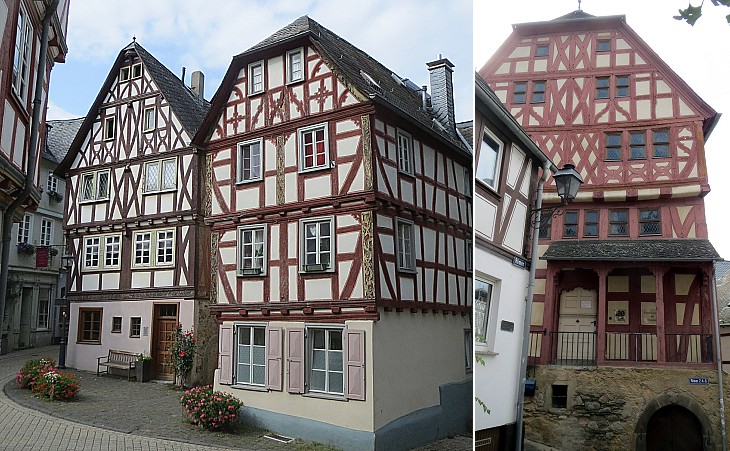 The image used as background for this page shows another timber house.