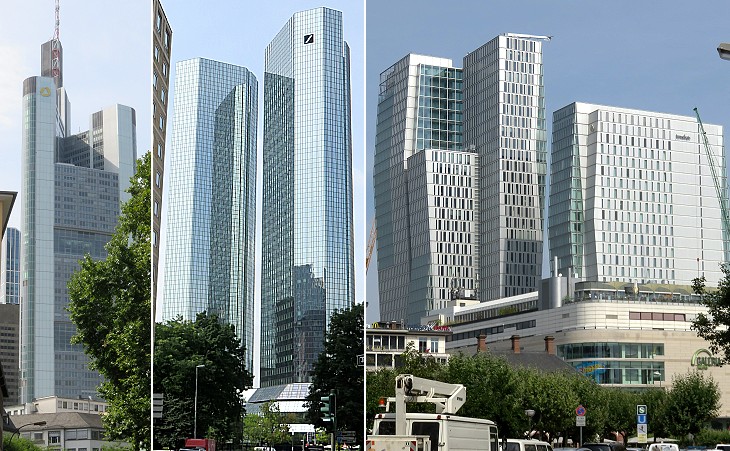 Banks and hotels in the financial district

Frankfurt is a free and Imperial city of Wetteravia in Germany in the circle of the Upper Rhine. It is situate in a pleasant fruitful plain on the river Maine on the confines of Hesse and Franconia. This city took its name from a ford over the Maine where the Franks used to pass that river in their incursions against the Saxons.
Thomas Nugent - The Grand Tour - 1749
The principal business carried on at Frankfort is banking and jobbing in the funds. The exchange is held in a building called Braunfels.
John Murray - A Hand-Book for Travellers on the Continent - 1838 (left) Apse of the deconsecrated Karmeliterkirche; (right) Archaeological Museum of Franfurt (AMF): Jupiter columns in the nave of the church; other Jupiter columns are shown in the introductory page

Frankfurt's Historical Museum had an Archaeological Department from the end of the XIXth Century. In 1937 an Archaeological Museum was established in the Dominikanerkloster; its collections were mainly composed of Roman funerary stones and they were partly destroyed during WWII. The museum reopened in 1954 and in the following years it became too small to house all the ancient objects found during the reconstruction of Frankfurt's historic centre and in the new suburbs of the city. In 1969 the museum was moved to the reconstructed Karmeliterkirche to which some modern halls and open spaces were added. The nave of the church is dedicated to the Roman period. 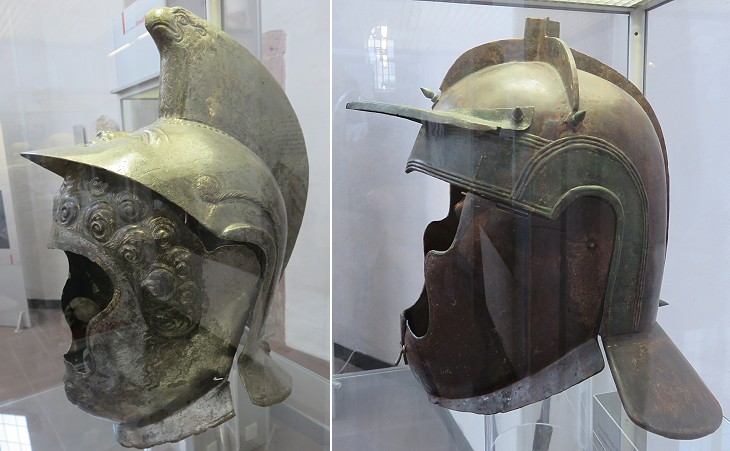 Nida or Civitas Taunensium originated from Roman military camps on the right bank of the River Maine which emptied into the Rhine near Mogontiacum (Mainz), a strong fortress. In 83 AD Emperor Domitian led a series of victorious campaigns against the Chatti, a bellicose German tribe who lived north of the Taunus Mountains. These campaigns secured the Roman control of the lower course of the River Maine. Nida must have housed permanent quarters of the Roman legions because many of the objects on display at the Archaeological Museum are associated with the military. The image used as background for this page shows a brick marked with LEG(io) XIII G(emina). The Romans displayed their political and military might through various "propaganda" means. Coins bearing the portraits of the emperors and other symbols were a way to show the superiority of the Roman society. They were well accepted by the German tribes who did not have a monetary system and used them for their internal exchanges. The finely decorated helmets which the Roman commanders wore during parades or when meeting with the local chieftains were another way to attract admiration, rather than hostility (see helmets which were found at Xanten and Carnuntum (Austria) and also one found in Lancashire in Roman Britain). 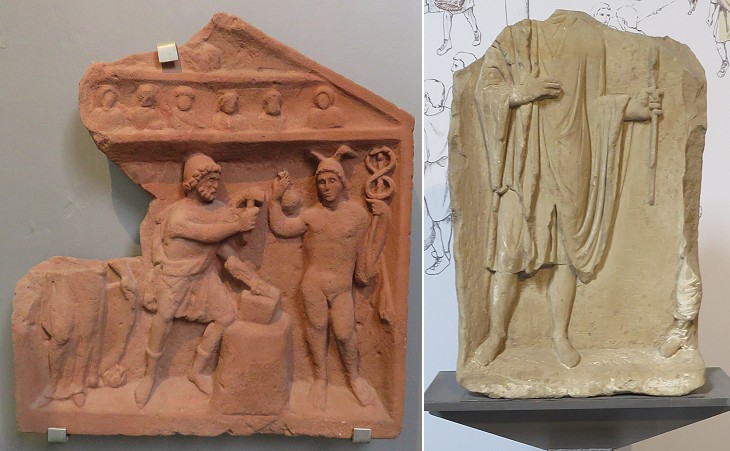 Amber. They call it glasing, and find it amongst the shallows and upon the very shore. But, according to the ordinary incuriosity and ignorance of Barbarians, they have neither learnt, nor do they inquire, what is its nature, or from what cause it is produced. In truth it lay long neglected amongst the other gross discharges of the sea; till from our luxury, it gained a name and value. To themselves it is of no use: they gather it rough, they expose it in pieces coarse and unpolished, and for it receive a price with wonder.
Tacitus - Germany - Translation by Thomas Gordon
The clay relief is a funerary one, but it symbolizes the civilian development of Nida as a trading centre because it shows Mercury, god of trade, paying the tools/weapons made by Vulcan with a purse of gold. The German tribes beyond the border exchanged furs, precious stones (e.g. amber), timber and slaves (from enemy tribes) in return for money, luxury items, glassware and wine. This product was initially imported from Gaul (which included the River Mosel valley), because viticulture was massively introduced in the Rhine valley only in the late IIIrd century. We do not know much about the development of Nida as a municipality, but because in ca 260 a triumphal arch was erected at Mogontiacum by Dativius Victor, a dec(urio) civit(atis) Taun(ensium) we can assume that the town had its own small senate of decuriones, local magistrates. Some merchants were rich enough to decorate their houses in Roman style. There were long periods of peaceful relations between the Romans and the Germans and the pressure on the border was more due to the desire by the latter to share the wealth of the Roman towns, than to a clash of civilizations.
The Roman governors of Germany bore in mind the words of Virgil: Remember, Roman, it is for you to rule the nations with your power, (that will be your skill) to crown peace with law, to spare the conquered, and subdue the proud. (Virgil - Aeneid - Book VI - translation by A. S. Kline). They usually managed to divide the leaders of the German tribes by adopting a stick and carrot policy. They have a tradition that Hercules also had been in their country, and him above all other heroes they extol in their songs when they advance to battle. Tacitus
We know that the Jupiter columns were dedicated to that god because of inscriptions I(ovi) O(ptimo) M(aximo) which leave no doubt about it. Were it for the statues at their top we would say they were dedicated to Roman commanders who defeated the Germans. The military origin of the columns is confirmed by the frequency by which Hercules was portrayed on their pedestals or shafts. Especially during the IIIrd century, when the Empire was confronted with internal and external threats, the soldiers felt that Hercules represented them. When Emperor Diocletian established the Tetrarchy he assumed for himself the title of Iovio, but he assigned that of Herculio to Co-emperor Maximian, a man who had spent his life on the battlefield, because he knew this would have been appreciated by the troops. In addition Hercules was associated to local gods by the Batavi, a German tribe living near Xanten at today's border between Germany and the Netherlands. Some Batavi were recruited as auxiliary troops in the Roman army. 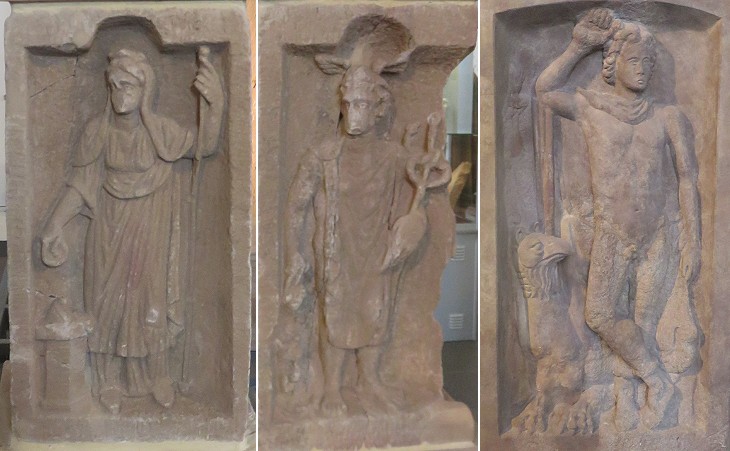 In ca 280, the Alemanni, a confederation of German tribes, were allowed to settle on the right bank of the River Rhine. They had the status of foederati (allies), but the relocation of the border from Nida to Mogontiacum meant that the merchants left the town, because its economy was based on being the point where goods were exchanged. The Romans kept control of the left bank of the Rhine until 406, when the river froze and Vandals, Suebi and Alani crossed it in large numbers. AMF: relief portraying Mithra in the act of slaying a bull and at its side statues of Cautes and Cautopates, two torch-bearers who indicated the rise and fall of the sun and more in general the cycle of life

At Wiesbaden (a town between Mainz and Frankfurt) the Schlossenen (little palace) (..) contains a Museum, principally of antiquities, coins, inscriptions, &c, dug up on the spot, and other national productions. The most curious relic of antiquity, perhaps, is a bas-relief found at Haddernheim, near Frankfort, representing a boy in a Phrygian bonnet, in the act of sacrificing a prostrate bull. The subject is supposed to refer to the worship of Mythras, which was introduced by the Romans from Persia. Murray
Nida fell into oblivion and only chance findings during the XIXth century revealed that it had been a Roman town of some size and not just a small fort. The worship of Mithra was widespread in the military during the IIIrd century. Its cult was based on a hierarchy of seven grades and it was reserved to initiates; these features appealed to the legionaries as it reflected their culture of discipline. Reliefs depicting the god have been found also in London. 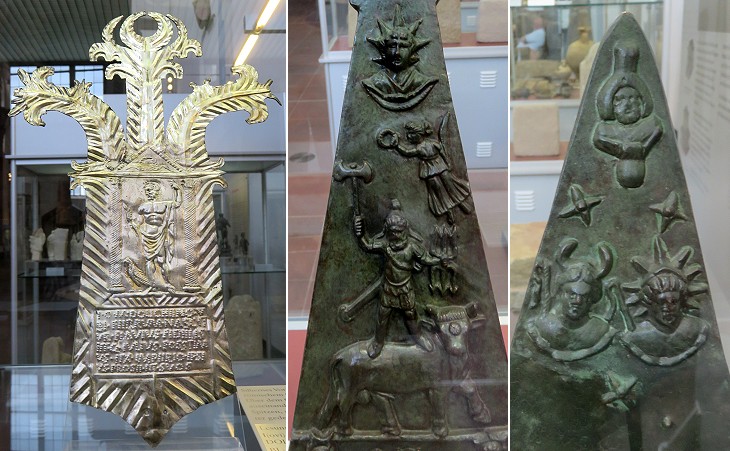 AMF: (left) metal plate with a dedication to Jupiter Dolichenus, a god of Anatolian origin who was associated with the discovery of iron mines; (centre/right) small obelisk portraying Jupiter Dolichenus standing on a bull (an iconography which can be traced back to the Hittites) with solar and lunar deities similar to those worshipped at Palmyra (see statues of the god at Carnuntum)

Gravestones of legionaries which were found in Germany (also at Mainz) indicate that the Roman army was strengthened by specialized troops, chiefly archers from eastern provinces of the Empire, e.g. Arabia and Mesopotamia which explains the presence of other eastern cults in addition to that of Mithra.