- Treia
(View from the walls of Ripatransone) 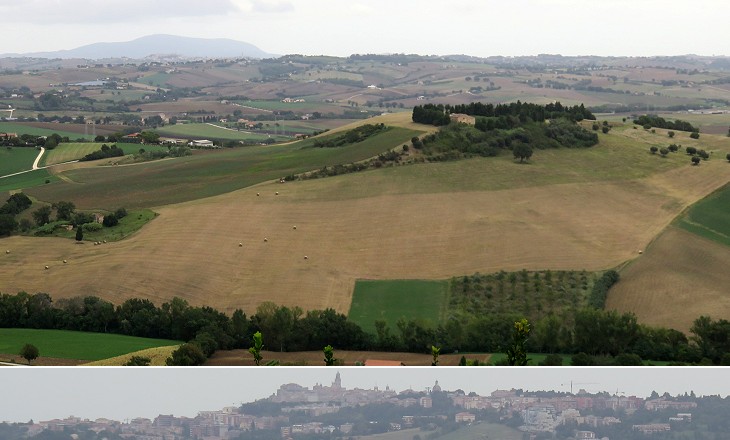 (above) View eastwards from Piazza della Repubblica, the main square, with Osimo and Mt. Conero behind it (far left); (below) Macerata seen from Treia

"I suppose that it must be Fermo! But we have been dodging about so all the morning among a morris-dance of towns, all situated much alike, and all changing their aspects so entirely as you see them from one side or another, that there is no remembering their relative positions, or feeling sure which is which." This is a specimen of the talk, which had occurred between me and my companion again and again that morning with reference to the bearings of the numerous hill-towns and villages around us.
Thomas Adolphus Trollope - A Lenten Journey in Umbria and the Marches - 1862
Similar to Cingoli, Treia claims to be the Balcony of the Marches because of its commanding position on an isolated ridge in the River Potenza valley. The view shown above supports the title given to this section. Mt. Conero provides a good reference point to identify some of the hill towns which have a very similar skyline, as noted by Trollope. 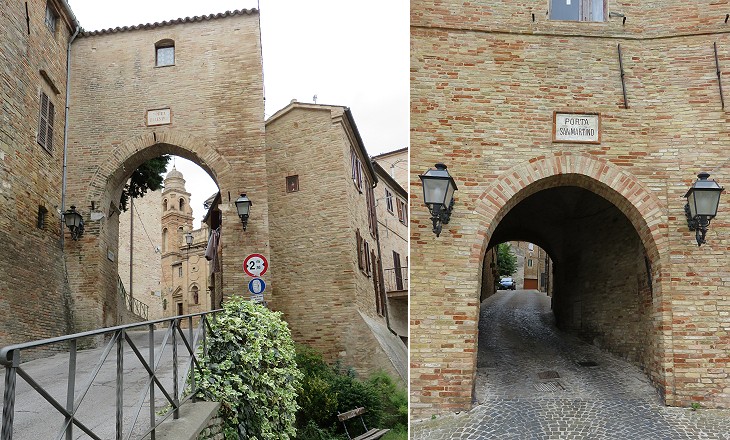 The coat of arms of Treia (which you can see in the image used as background for this page, the weathervane of S. Michele) shows two roses above three mountains. The town actually stands on three adjoining hills. It was founded in the Xth century and it was known as Montecchio until 1795 when Pope Pius VI gave it the status of Città and renamed it after a nearby Roman town. Ancient Treia stood in the valley and it was destroyed by the Visigoths in the early Vth century, similar to Urbs Salvia and Helvia Ricina near Recanati. 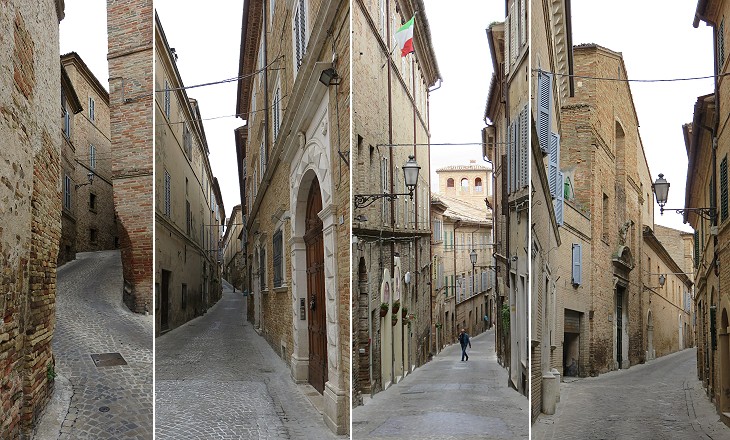 San Gemini is a very small village, as is usual in Italy, resembling the street of a city; being composed of two rows of high stone houses, and when we have passed the last of them, we are again in the open country.
George Stillman Hillard - Six Months in Italy in 1847-1848
To say that Treia, similar to San Gemini, has just one street may not sound true to the postman, but is otherwise a proper assessment of the urban layout of the town. It is based on a very long south-north street which follows the morphology of the three hills with turns and ups and downs. All the historical buildings of Treia are aligned along this street. 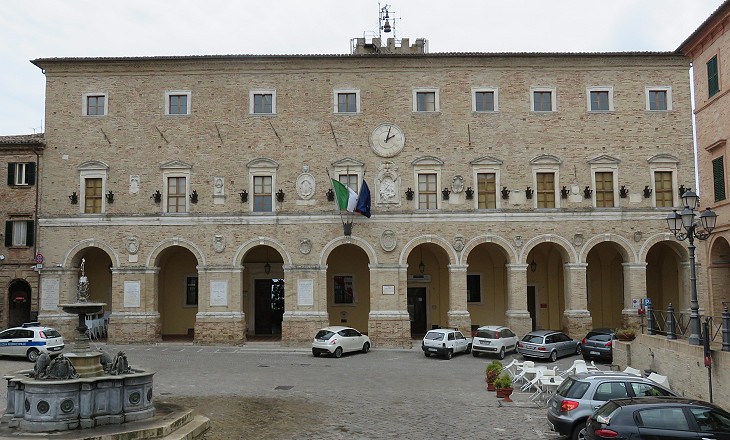 In the XIIth century Treia enjoyed some form of self-government and a chronicle of 1157 makes reference to two consuls in charge of ruling the town. It was difficult for such a small settlement to retain its independence in the continuous wars between Guelphs, supporters of the Popes and Ghibellines, supporters of the German Emperors. In 1263 Treia was sieged by Corrado d'Antiochia, grandson of German Emperor Frederick II, whom the defenders managed to take prisoner, by simulating a surrender and closing the gate after he had entered the town. Treia however could not avoid becoming a possession of the Varano, rulers of Camerino and eventually being directly ruled by the Papal government, via their representative at Camerino. 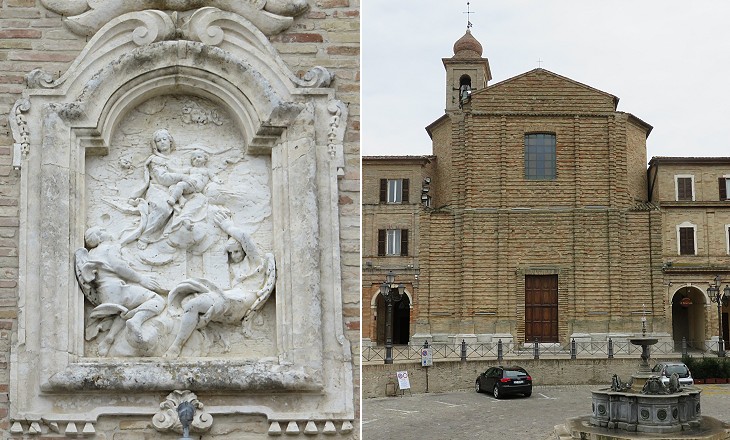 It is very difficult to find a town of the Marches without a reference to Our Lady of Loreto, whose shrine is almost directly visible from Treia.
S. Filippo shows the great success met in the region by the Congregations of the Oratory of St. Philip Neri. The church is very large and stands in the main square of the town. Other churches dedicated to St. Philip Neri were built at Camerino, Macerata, Matelica and Ripatransone. 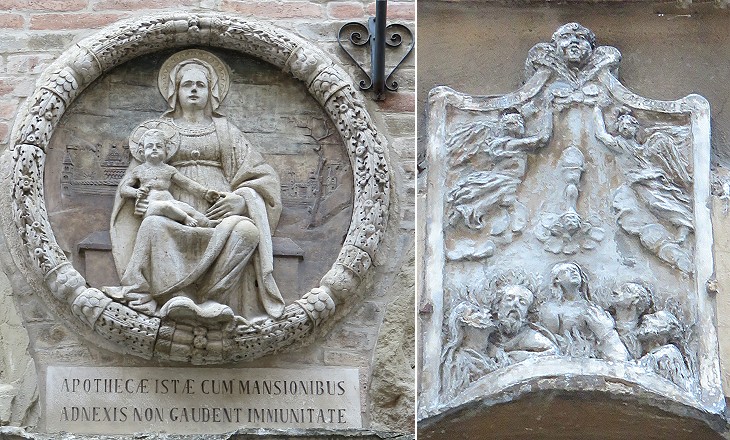 (left) Relief on a XVIth century building; the sentence below specifies that the right of asylum granted in a nearby church did not apply to this building; (right) relief near S. Maria del Suffragio showing Souls in Purgatory in line with the Creed of Pope Pius IV (I steadfastly hold that there is a Purgatory, and that the souls therein detained are helped by the suffrages of the faithful). See the same subject in Malta

During the French occupation of Italy in the early XIXth century and later on after the unification of the country in 1860, some churches and monasteries were closed and some religious images and symbols, including the coats of arms of the Popes, were removed. Apparently at Treia this happened to a lesser extent and by walking along its main street one sees how pervasive was the presence of religion in the everyday life of its inhabitants, during the secular rule of the Popes. 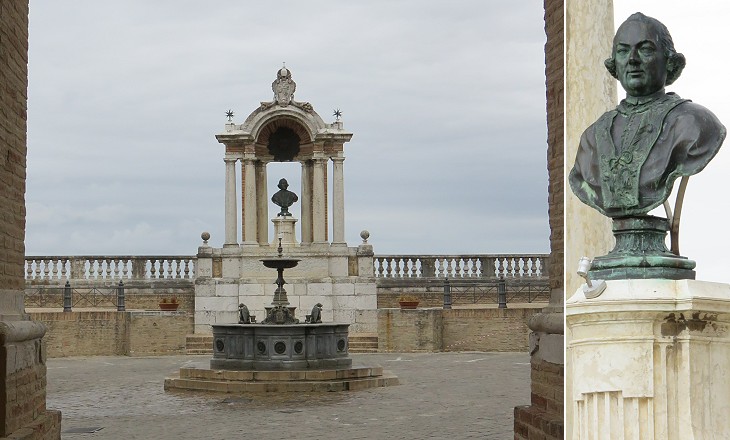 Piazza Vittorio Emanuele II: Monument to Pope Pius VI and bust by Antonio Calamanti based on a model by Tommaso Righi

The status of Città was a preliminary step for Treia becoming a bishopric see. Its inhabitants asked Andrea Vici, a leading Roman architect, to design a new church which would serve as the Cathedral and a monument celebrating the Pope in the main square. The construction of the latter did not require much time, but the Cathedral was completed in 1814. 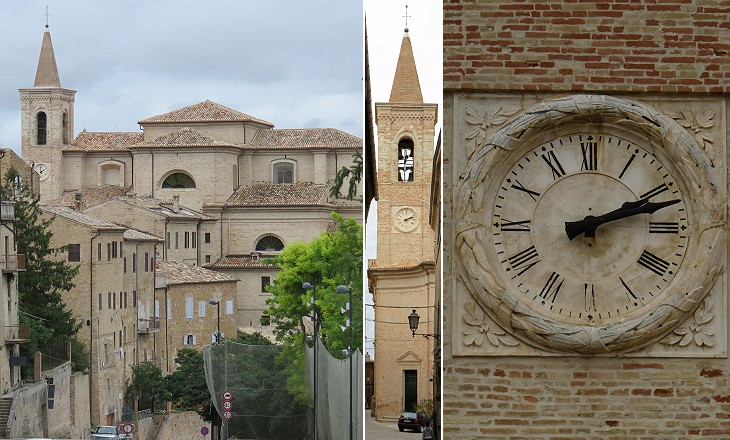 The bishopric see of Treia was established in 1817 after the return of Pope Pius VII to Rome. It included part of the diocese of Camerino, but to the great disappointment of the inhabitants of the town, the Archbishop of Camerino was asked to take care of the new diocese, so that there are no Bishops of Treia to be recorded. In 1913 the responsibility was assigned to the Bishop of San Severino and today to that of Macerata.