Being a Duke of Savoy and managing to retain and expand the duchy was not an easy task. Duke Victor Amadeus II realized the hazards of his job in 1706 when a French army laid siege to Turin, the capital of his state, to punish him for siding with England, Austria and the Dutch Provinces in the Spanish Succession War.
He was lucky that his predecessors had built a strong citadel which resisted (for more than a hundred days) until the Imperial army led by his cousin Prince Eugene of Savoy came to his rescue. In the long days of the siege, while the walls of the citadel were shaken by the mines set and blown up by the French and by his own men under the French camp, the Duke made a vow to the Virgin Mary: he would have built a sanctuary dedicated to her on the top of Superga, the high hill overlooking Turin from the other side of the River Po.

In 1714 the Treaty of Rastatt put an end to the war: in Italy, Austria acquired most of the Spanish possessions, but Victor Amadeus II managed to be rewarded for his services: he acquired two eastern provinces of the Duchy of Milan and Sicily, which meant a promotion in rank in the sense that he became a king: the King of Sicily.
In that same year he appointed Filippo Juvarra architect of the Royal House; Juvarra was a Sicilian from Messina and this may have influenced the King's decision. He had spent ten lean years in Rome managing to get only one commission: Cappella Antamoro in S. Girolamo della Carità; he was nevertheless highly considered by Carlo Fontana, the leading Roman architect and he had won the 1705 Concorso Clementino, a contest promoted by Pope Clement XI, who, not having money to build new monuments, kept the architects busy by asking them to design imaginary buildings (the theme assigned in the 1705 contest was "Project for a royal palace as a villa for three important persons"). To earn his living Juvarra worked as a scenery designer at the private theatre of Cardinal Pietro Ottoboni in Palazzo della Cancelleria. He spent his spare time drawing, furiously drawing: in particular details of windows, gates, columns and coats of arms, but also architectural fantasies: churches, palaces, villas, fountains. He often attached to them detailed plans.

(left) Rack railway carriage leading to Superga; (centre) the dome seen from the upper railway station; (right) a station of the Cross on the final stretch of the road

Having won Concorso Clementino Juvarra was accepted as a member of Accademia di San Luca, the guild of the Roman painters, sculptors and architects: according to the admission rules he had to present one of his works to the Academy, which he did in 1707: his project for a church was based on a domed octagonal church with a campanile at either side: the campanili were located on the lateral axis of the church rather than aligned with the façade. From other drawings we know that Juvarra continued to build on this initial project.

(left) Side view of the Basilica; (right) entrance to the monastery

In 1717 Juvarra started working on the church promised by King Victor Amadeus II. The site chosen for the building was (and is) beautiful. The top of the hill (672 m.) is more than 400 m. above Turin and it enjoys an extraordinary view of a large section of the Alps. The church is incorporated into a large, square shaped monastery.

In designing the dome, Juvarra had no doubt in mind Michelangelo's Cupola di S. Pietro, but the relationship between the dome and the drum below it is different: similar to contemporary Vienna's Karlskirche by Johann Bernhard Fischer von Erlach, the drum is very high.
In the design of the campanili, Juvarra was reminiscent of those of S. Agnese in Agone. The whole building has gained from a recent restoration which has emphasized the XVIIIth century use of two different colours to highlight architectural elements such as pillars and columns.

(left) Frontal view; (right) the glacier of Monte Rosa seen through the woods surrounding the Basilica

Another reference to the monuments of Rome can be found in the linkage between the portico and the circular shape of the church, similar, but not identical to that of Pantheon. 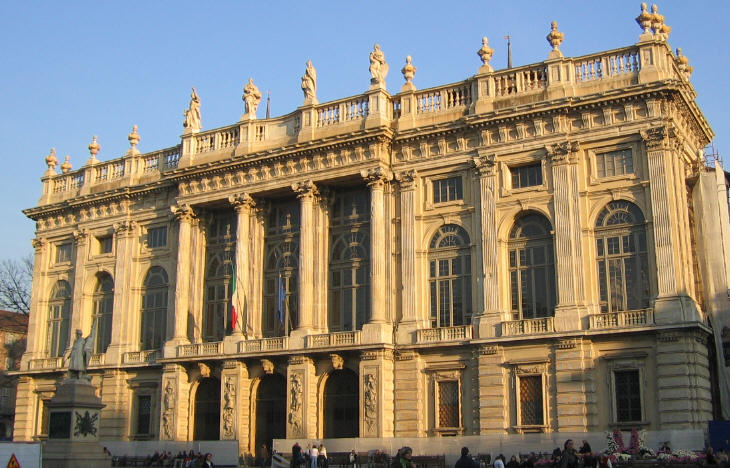 Apart from short intervals in Lisbon, Paris, London and Madrid, Juvarra worked for the Savoy House until his death in 1736. He designed the expansion of Turin and provided the Savoy with residences appropriate to their new role. The façade of Palazzo Madama (named after a XVIIth century Queen Mother, Madama Reale, Royal Madam) is one of his many works in Turin. 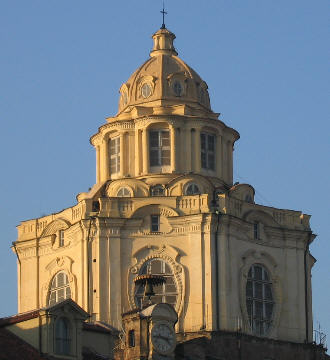 In essence Juvarra was the appropriate heir of Guarino Guarini, who had first shaped the Baroque appearance of Turin.