On February 3, 1871 a law proclaimed Rome the new capital of the Kingdom of Italy. The court, the parliament and the associated bureaucracy moved to their new location in the course of that year. It was the start of a booming period for the real estate market. In 30 years the population grew from 244, 484 inhabitants in 1871 to 462,783 in 1901. 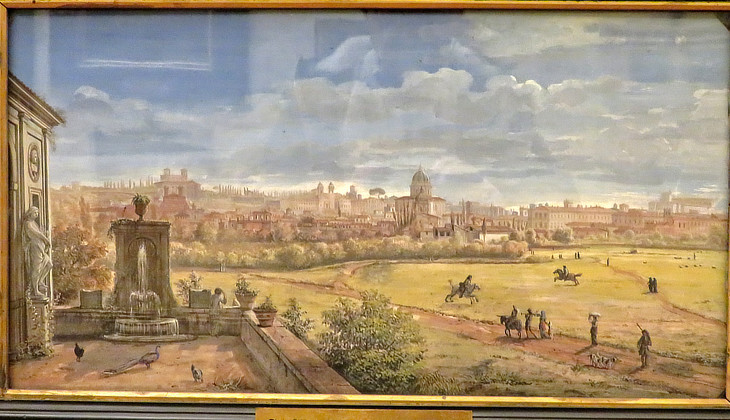 The first town-plan (1871) suggested developing the area near the railway station and actually in the years which followed ministerial buildings, hotels, large apartment blocks, new squares and streets shaped that part of Rome afterwards called Roma Umbertina after King Umberto I under whose reign (1878-1900) the development took place. However immediately after 1870 a former minister of the papal government, cardinal Francesco Saverio de Merode, in association with some businessmen, bought most of the vineyards and farms (Prati, meadows) outside Porta Castello including Villa Altoviti, a large estate near the river, opposite Porto di Ripetta.
The new owners of the area promoted its development by building at their expense a bridge which gave quick access to the centrerof Rome and put pressure on the municipal authority to include Prati in the town-plan; in 1873 their request was accepted.

The design of the new quarter followed a regular pattern (in Italy typical of Turin, the first capital of the Italian Kingdom) and it was intensively built. An interesting aspect of the street layout is that it does not allow viewing of the dome of S. Pietro: the Italian ruling class and the Pope were at loggerheads and in a way Prati turned its back to the symbol of the former government of Rome. Another effect of this confrontation led to dedicating the main street of the new quarter to Cola di Rienzo who in 1347 had tried to restore a sort of Roman Republic and had revived for himself the role of tribune of the people, an ancient Roman institution. 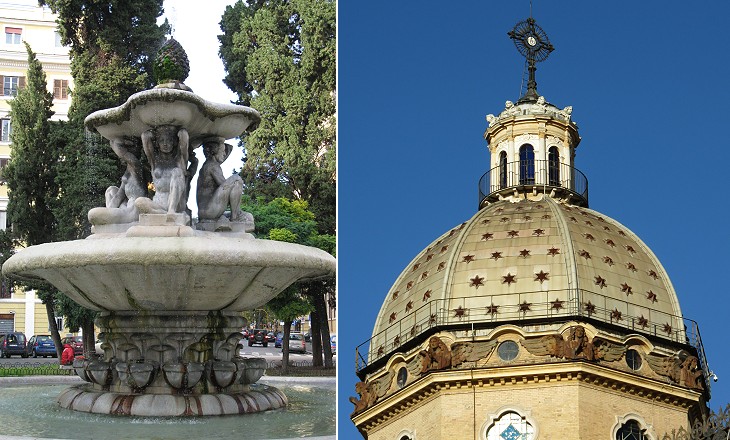 The main thrust behind the development of Prati was to provide cheap accommodation to the employees relocated to Rome and in general to the growing number of immigrants and therefore the initial town-plan did not provide for large squares, gardens or other amenities. Only at a later stage and definitely after World War I the quarter acquired a higher appreciation and it was embellished with some nice buildings and monuments.
This short tour of Rione Prati starts in one of its few squares (Piazza dei Quiriti - No 1 in the map) and with a fountain designed by Arnaldo Serra: the design based on two basins has a vague resemblance to other historical fountains, while the fir-cone at its top is a clear reference to la Pigna, a fountain of ancient Rome.
In 1887 Pope Leo XIII reached his 50th year of priesthood and offers were made to build a church to celebrate the event. The Pope chose Prati as a suitable location to provide the new quarter with a large church. The church was dedicated to St. Joachim (the Pope's name was Gioacchino Pecci) and it was designed by Raffaele Ingami (Via Pompeo Magno - No 2 in the map). 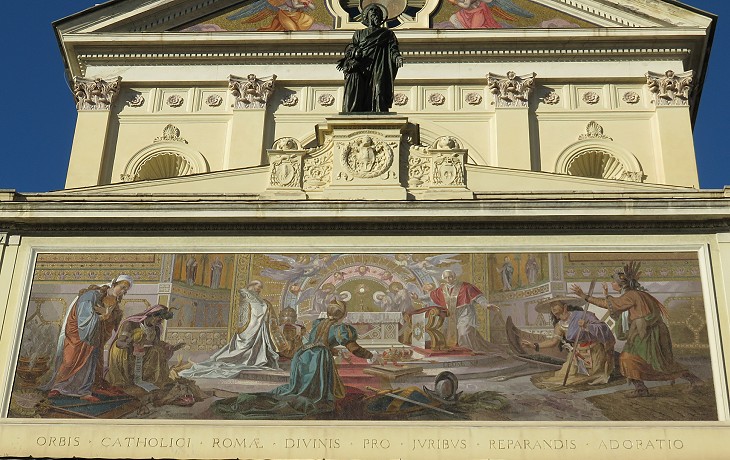 Façade of S. Gioacchino: mosaic with the five continents (1898)

The façade, like those of many medieval Roman churches, was embellished with a very large mosaic. While in Fontana dei Fiumi and in the ceiling of S. Ignazio the world is represented by four continents, in this mosaic the continents are five and my Aussie friends will not feel neglected. 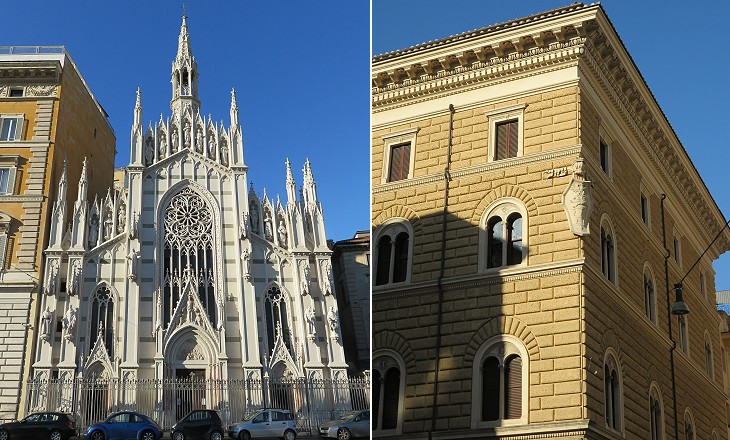 Eclecticism, or the combination of different styles, is the main characteristic of Prati. The photos above show two of the most surprising buildings one can find in Rome. In 1887 a fire damaged the rear side of Palazzo Odescalchi; prince Baldassarre Odescalchi, influenced by his Florentine wife, a Rucellai, asked the architect Raffaele Ojetti to rebuild it having in mind Palazzo Medici Riccardi in Florence and Ojetti gave the same appearance to a large block of apartments in Prati (Via Vittoria Colonna - No 3 in the map).
In 1893 Victor Jouet, a French missionary, founder of a brotherhood especially devoted to prayers for the Purgatory souls, managed to buy a small parcel of land in a very good position near the Tiber. Because of space limitations and following his taste he asked the architect Giuseppe Gualandi to design a church with a vertical thrust. The result is called by the Romans il piccolo (little) Duomo di Milano, for its many pinnacles (Lungotevere Prati - No 4 in the map). 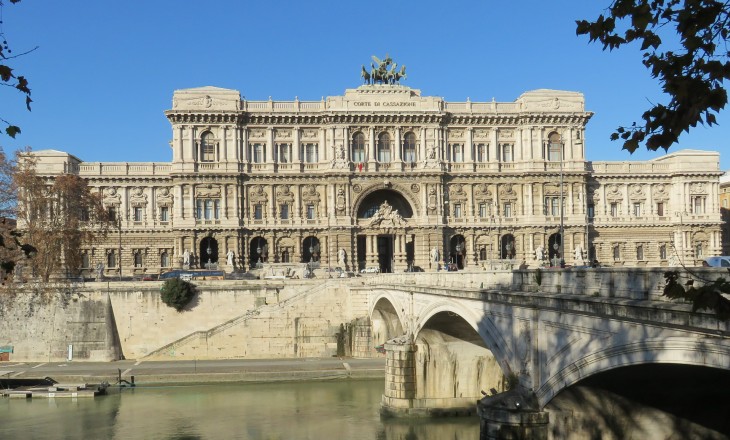 The triumph of eclecticism was achieved in the design of a colossal building aimed at housing all the different courts of justice (once in Palazzo di Montecitorio). The aim of the government was to build a monumental palace which would compete with those of the past. The winner of the competition was architect Guglielmo Calderini. The site chosen at the end of a new street which started from near Tor Sanguigna and across a new bridge, provided for the building a very fine perspective. It had however the disadvantage of being too close to the river and its marshy shore so that it took 22 years to complete it and the cost was enormous. The palace (Piazza dei Tribunali - No 5 in the map) assembled elements of Renaissance and Neoclassicism styles with a rather Baroque excess of decoration and statues. 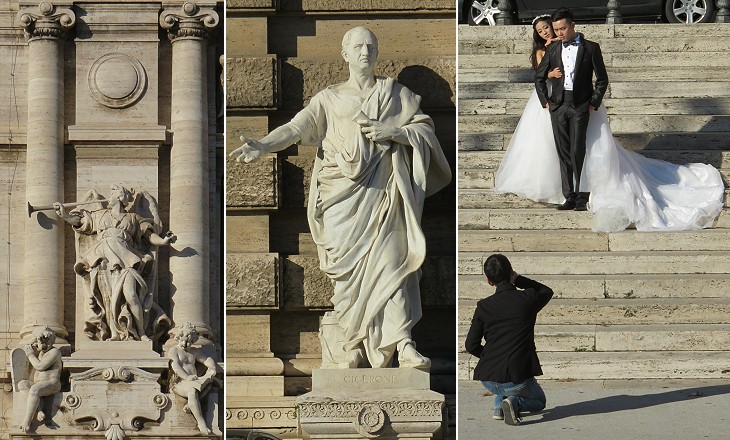 Palazzo di Giustizia: (left) detail of the decoration; (centre) statue of Cicero; (right) not everybody dislikes it

Both for its destination and its appearance the Romans labelled it as il Palazzaccio (the ugly palace). 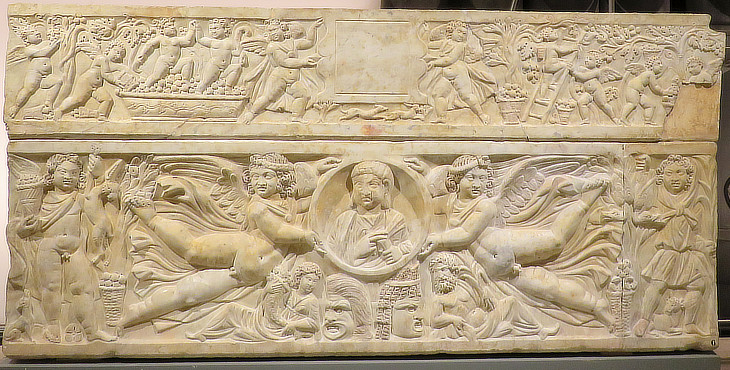 Centrale Montemartini: sarcophagus which was found in 1889 during the excavations for Palazzo di Giustizia (see a list of sarcophagi which were found in Rome) 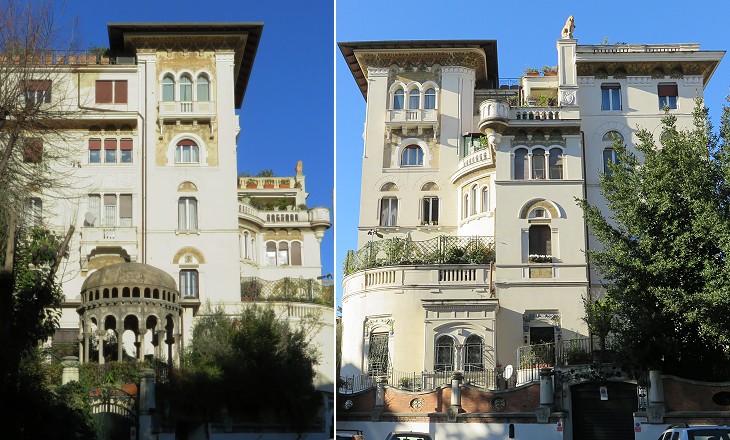 Eclecticism yielded a better result in buildings of a smaller size: of these the best example is Villino Cagiati (Via Virginio Orsini - No 6 in the map), designed by architect Garibaldi Burba with the assistance of some skilled decorators. You may wish to see some buildings of Quartiere Coppedè which was built in approximately the same years. 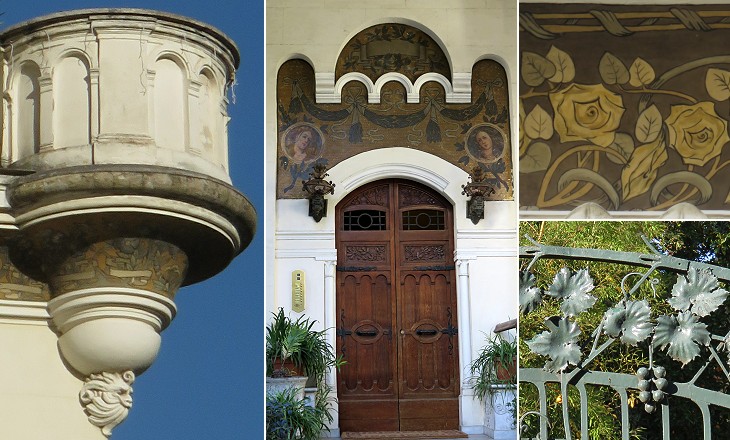 Villino Cagiati: details; another detail is shown in the image used as background for this page

Read William Dean Howells' account of his visit to Quartiere Prati in 1908.