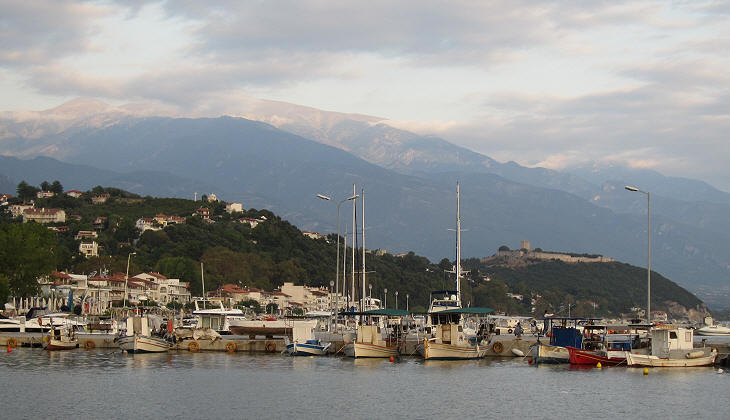 The fortress seen from today's Platamonas beach resort; in the background Mount Olympus

After foundering in mud and swamps for about three hours, we came to the shore of the Gulph of Therma (Salonica). Here a most beautiful view opened upon us, of the Pierian region, skirting the base of Olympus along the coast. The summits of the mountain appeared covered with deep snow, the highest point bearing west north-west; and the modern citadel of Heraclea, now called Platamonos, standing upon a promontory in the middle of this enchanting scene.
Edward Daniel Clarke - Travels in various countries of Europe, Asia and Africa in 1799-1804
The fortress is situated at the southern end of Macedonia ad it controlled the road to Thessaly and Attica. 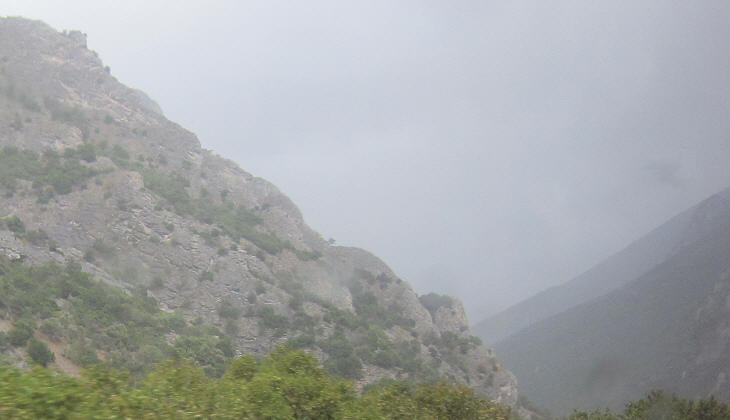 We travelled on the east side of the Peneius, where the road seems to have been levelled by cutting away the rock at the foot of mount Ossa, the road leads to the south west for about two leagues, the passage for the river being in some parts very narrow, with small islands in the middle, so that the water of the Peneius might be confined on some great rains, and cause the flood in the time of Deucalion.
Richard Pococke - A Description of the East and Some Other Countries - 1745
(October 1807) The Thessalians say that Neptune opened the passage at Tempe, through which the Peneius flows, and this will appear probable to those who believe that Neptune shakes the earth, for the separation of the mountains Olympus and Ossa seems to me to have been caused by an earthquake. (..) This morning the atmosphere is so diaphanous that I am able to distinguish the castle of Saloniki, and to connect it by the sextant with several important points; though its direct distance is not much less than 60 geographical miles. But while distant objects are so clear, the whole of Tempe is covered with mist.
William Martin Leake - Travels in northern Greece - 1835
The road to Thessaly passed through the Vale of Tempe, a valley with a narrow gorge between the Olympus and Ossa massifs; in antiquity the site was regarded as being idyllic and the home of Apollo and the Muses, however because it is also the only natural corridor between Thessaly and the Aegean Sea, it is subject to violent thunderstorms; in the Middle Ages it had a rather sinister name: Lykostoma, Wolf's Mouth. 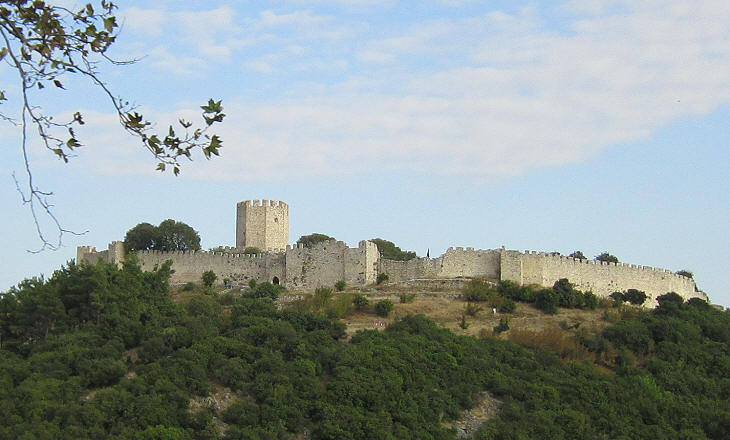 After having followed the sea shore for a short time, halt at a pleasant kiosk, shaded by large plane trees, and standing near the beach, just below the hill of Platamona on the south, where a rivulet flows through the building into the sea. Leake
We reached Platamonos, we passed a little river, which here discharges itself into the sea. When we arrived at the base of the rock upon which stands the citadel of Platamonos, we were told that the Turkish garrison would admit no Christians within the walls of the fortress: we therefore halted for the night at a small village below the castle. Clarke
The whole of mainland Greece was gradually conquered by the Ottomans; in 1382 they invaded Thessaly and in 1430 they captured Thessalonica; the fortress of Platamonas was seized between these two dates. 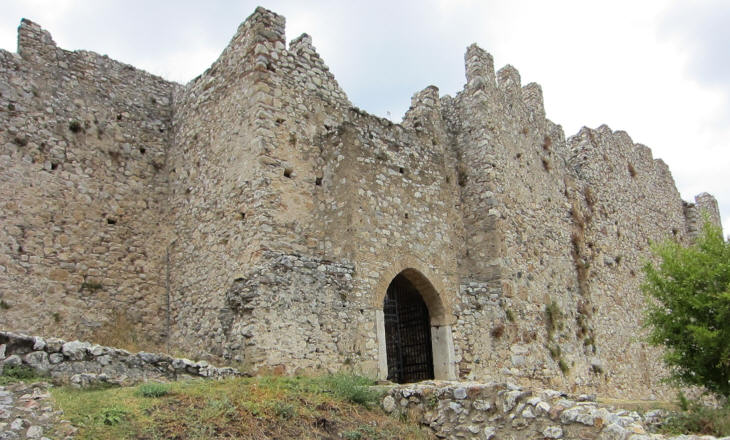 Platamona, the derivation of which is the level monastery, in allusion to its situation in the plain, appears rather from the mention made of it in the Byzantine history, to have been in the time of the Greek Empire, what we now find it, a fortress. It contains a few Turkish houses, and on the outside there is a ruined khan by the road side. Though standing at the bottom of a bend of the coast, it is a conspicuous object, from being the only elevation on a low shore of great extent. As the place has the advantage also of a perennial supply of good water, there can scarcely be a doubt that it was the site of one of the two ancient towns which history places on this coast. Leake
The fortress of Platamonas is considered as a Byzantine fortress, although some details such as the gate suggest a different origin, i.e. that it was built in the early XIIIth century when Thessalonica and Thessaly were ruled by Boniface of Montferrat, the leader of the knights of the Fourth Crusade which ended with the creation of the Latin Empire of Constantinople. The fortress was known as Citro (It.) or Chitre (Fr.).
Boniface was killed in 1207 during a battle with the Bulgarians; in 1224 Thessalonica was conquered by the Byzantine rulers of Epirus and in 1261 the Byzantine Empire was re-established in Constantinople. 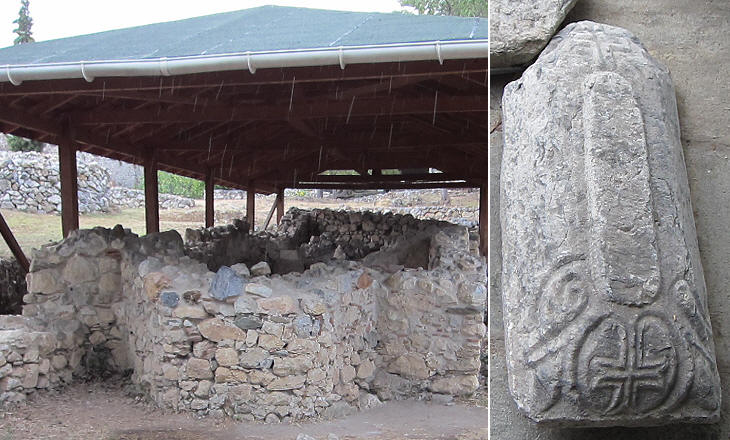 (left) A former chapel; (right) a Byzantine "pulvinus", a piece in the form of a truncated pyramid and bearing a cross which was placed above a capital (see one at Constantinople)

As a matter of fact in the XIIIth century mainland Greece was divided up into a number of ephemeral states ruled by Serbs, Romanians, Italians, French, Catalans, with only minor territories remaining in the hands of the Byzantine emperors. There were five chapels inside the fortress; one of them was turned into a mosque, while the others were incorporated into other buildings. The Ottomans maintained the fortress, but for many centuries its strategic importance was minimal because their rule was not under threat in this region. 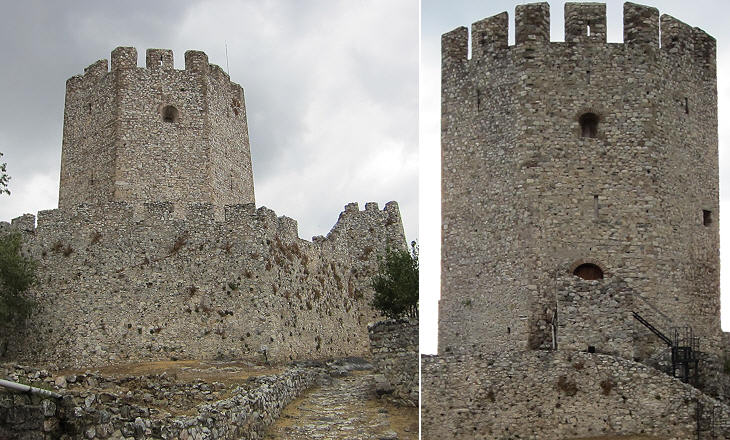 (left) Walls of the citadel; (right) the keep

A square section of the fortress was separated from the rest of the enclosure by walls: it was located on slightly higher ground and inside it a circular wall protected a massive octagonal tower; this system of fortifications was clearly obsolete after the development of cannon in the XVth century, but the Ottomans did not make any major attempt to modify it. 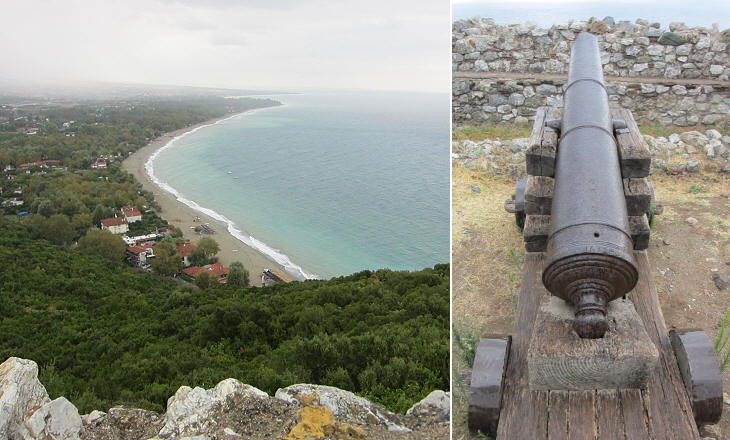 The military importance of the fortress was revived in 1881 when at the end of lengthy negotiations Thessaly was annexed to the Kingdom of Greece, while Mount Olympus remained in Ottoman hands; in 1897 an attempt by the Greeks to invade Macedonia was repelled and the border was slightly redesigned in favour of the Ottomans; the 1900 Times Atlas of the World indicated Platamonas as being an important fortress.
In 1912 an alliance among Montenegro, Serbia, Bulgaria and Greece waged war on the Ottoman Empire; the Greeks attacked on the western side of Mount Olympus, rather than along the sea and in a matter of weeks conquered Veria and Thessalonica.

Return to page one to see the sanctuaries of Dion or to page two to see the town.