You may wish to see a page with a map of the region first.

Vergina: the "Great Tumulus", the reconstructed burial mound housing the royal Macedonian tombs (you may wish to see the "tumuli" of Mycenae)

(December 1807 - on the road from Thessalonica to Veria) A tumulus rises close to the road on the right, then five more, nearly in a line, the last of which is at a musquet shot from Alaklisi (ancient Pella). (..) The tumulus nearest to Alaklisi is a great heap of earth based upon the rock, which all around is covered only with a thin layer of mould. An opening cut in the rock, covered above with a semicircular arched roof of masonry, and having a small chamber on either side of it, leads on a descent 33 feet long, to two chambers, which are excavated in the rock, under the centre of the tumulus, and are now nearly filled with the earth washed into them through the entrance. (..) Eight minutes beyond Alaklisi begins a second line of tumuli. (..) It might naturally be supposed, that some of these tumuli were royal sepulchres, but as we are informed upon good authority that Aegae continued to be the burial place of the royal family, even after the seat of government was transferred to Pella, (..) it is more probable that the tumuli of Pella are the tombs of some of the noble families of Macedonia. That which I examined might have been the receptacle of a family during a long succession of ages, and from the arched entrance it seems to have been used for this purpose, as late as the Roman Empire.
William Martin Leake - Travels in northern Greece - 1835
In 1977 Greek archaeologist Manolis Andronikos unearthed four tombs of members of the Macedonian royal family in a small village south of Veria; the village is named Vergina after a medieval Byzantine princess who lived in Palatitsia, a small palace built upon a larger residence of the ancient Macedonian kings, but it was identified as the ancient Aigai in the XIXth century.
Professor Andronikos came to the conclusion that one of the tombs which had not been plundered and where he found very elaborate golden crowns, similar to those found in Greek towns in Italy and near Troy, was the tomb of Philip II, the father of Alexander the Great; he has left an exciting account of his feelings at the time of the discovery when he realized that he was holding in his hands a golden box containing the bones of the king. The lid of the box was decorated with a sun having sixteen rays, which is today the symbol of Macedonia, a region of the Greek Republic (see the image used as background for this page). Other archaeologists suggest that Philip II was buried in one of the looted tombs and that the crowns belonged to one of his sons, a stepbrother of Alexander the Great.
The "Treasure of Vergina" was initially displayed at the White Tower of Thessalonica and subsequently in temporary exhibitions throughout the world.
The cluster of the royal tombs is protected by a tumulus-shaped shelter, the present Museum of the Royal Tombs at Aigai. All the items found in the cluster, the architectural buildings, wall paintings of the tombs are displayed in a secure and controlled environment. It constitutes a particularly original example of burial monuments sheltered in a modern underground museum.
From the UNESCO documentation of the site which in 1996 was added to the World Heritage List. 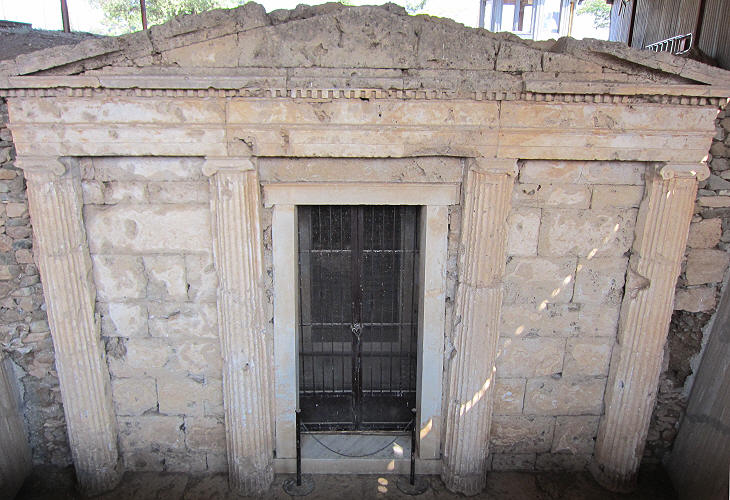 An isolated tomb in a mound near Palatitsia gives an idea of the major royal tombs; it was built in the IIIrd century BC, at a slightly later time than those of Philip's family; it had a façade similar to that of a classical temple; in the burial chamber archaeologists found a decorated marble throne and they deduced that the tomb belonged to a Macedonian king or to an important member of the royal family. 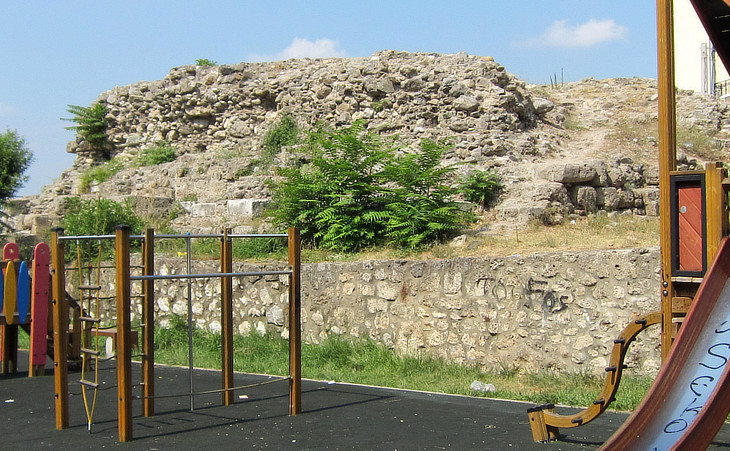 We arrive in sight of Verria, and cross a deep rivulet. (..) Here are some foundations of an ancient bridge. (..) An ascent from thence of ten minutes conducts to the modern gate of Verria, after passing through a Turkish cemetery, which contains many fragments of ancient architecture and a little beyond it a large piece of the wall of the ancient Berrhoea, founded on the rocky bank of the rivulet, and apparently one of the lower angles of the inclosure of the city. Leake 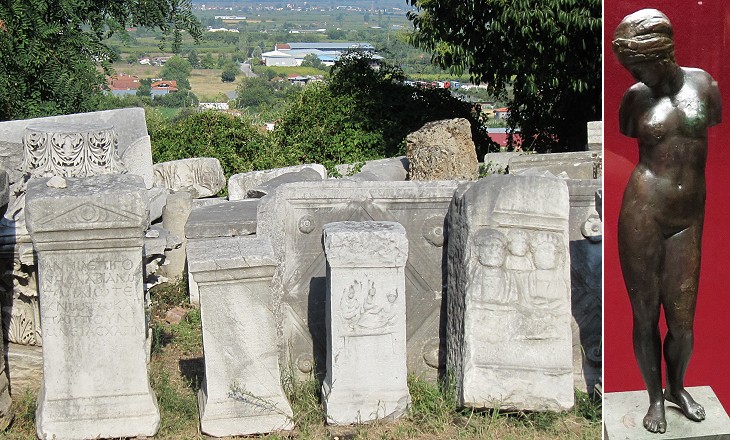 (left) Archaeological Museum of Veria: tombstones of the Roman period, including that of Annia Epigone which was noticed by Leake; (right) Staatliche Antikensammlungen of Munich: bronze statuette from Veria

The remains of the ancient Berrhoea are very inconsiderable. (..) I can discover only three inscriptions at Verria: in one, Popillius Summus the younger is honoured by the council and people; the other two are sepulchral monuments, one of which was erected by Annia Epigone, in memory of her son Flavianus, and her grandfather, who is not named. Leake 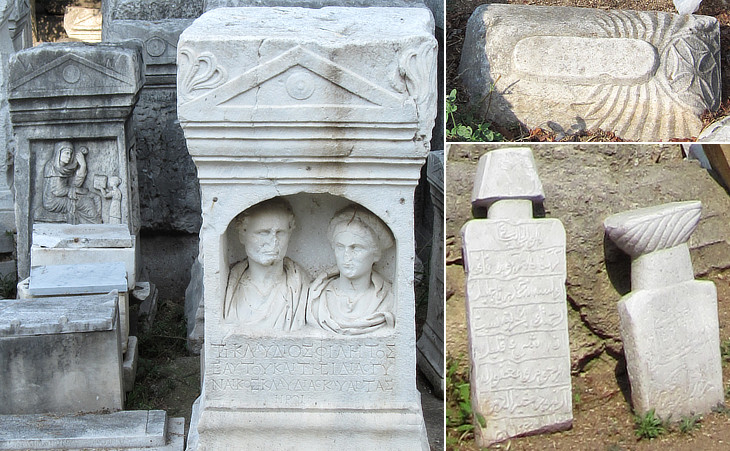 (left) Archaeological Museum of Veria: other Roman tombstones; (right) in other parts of the town: (above) Byzantine "pulvinus", a piece in the form of a truncated pyramid and bearing a cross which was placed above a capital, see those at Philippi; (below) Turkish tombstones

Water flows through every street; which advantage, together with the lofty and salubrious situation, the surrounding gardens, many fine plane-trees interspersed among the houses, the vicinity of the mountains, and a commanding view over the great level to the eastward, renders Verria one of the most agreeable towns in Rumili. Leake
When in 54 AD St. Paul visited Veria, after having been to Philippi and Thessalonica and before going to Athens, the town housed a Jewish community and this is per se an indication that Veria was a centre of some importance, although it was not touched by Via Egnatia, the main communication road of the region; its wealth was based on farming as it it was located at the southern edge of a large plain. 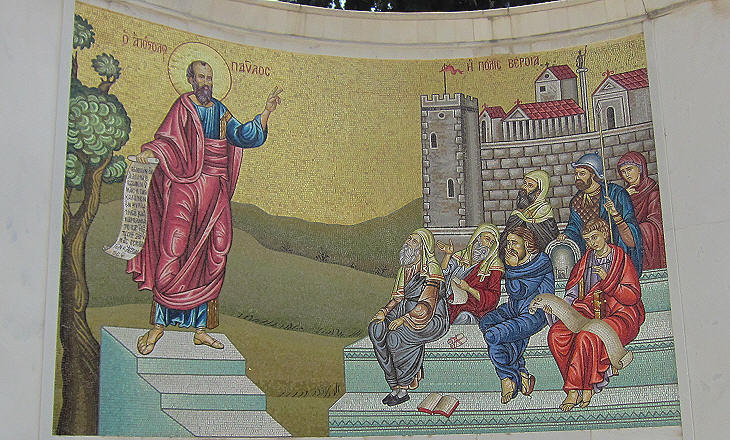 Modern mosaic at Veria showing St. Paul speaking to the Bereans; see another modern mosaic showing the travels of St. Paul at Kavala

Verria, as the name is pronounced, or Berroia, as it is still written, stands on the eastern slope of the Olympene range of mountains. Leake
They (the Bereans) received the word (of St. Paul) with all readiness of mind, and searched the scriptures daily whether those things were so. (Acts of the Apostles 17, 11 - King James Bible). The ancient town was mainly known for this quotation. 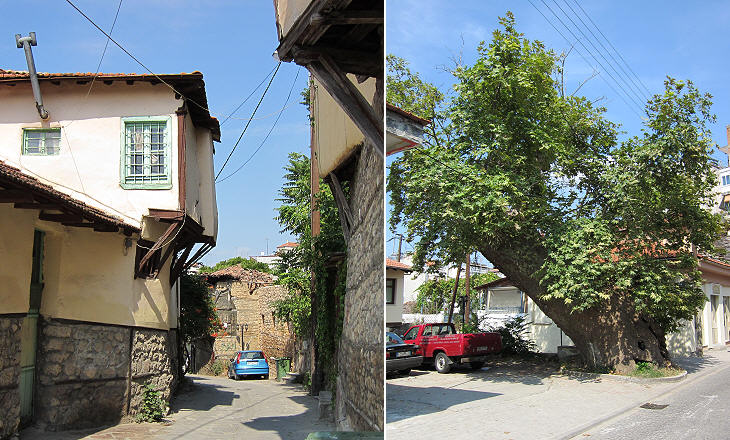 (left) Old house in Barbouta, the Jewish quarter of Veria; (right) plane tree (near the old cathedral) on which in 1430 the Ottomans hung Archbishop Arsenios

The town contains about 2000 families, of which 1200 are Greek: the houses are lofty, and for Turkey well built. (..) The manufacturing part of the population spin the hemp and flax grown at the foot of the mountain, and make shirts and towels, particularly the makrama, or large towel used in the public baths, and of which there is a great con- sumption in all Turkish towns. (..) Many of the water-mills around the town are for fulling coarse woollens and carpets, which are made in the surrounding villages or by the Jews. Leake 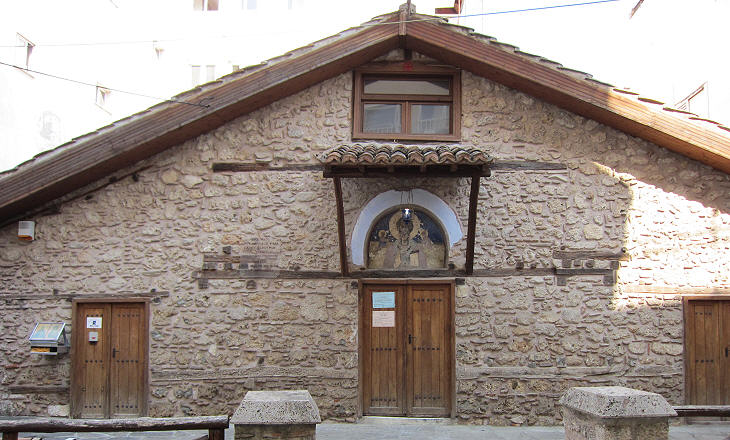 After the Ottomans conquered Veria in 1430, its cathedral, which housed many frescoes, was turned into the main mosque of the town, but smaller churches continued to be places of worship for the Greeks who were allowed to build new churches as long as their size and outside appearance did not hurt the feelings of the Muslims. 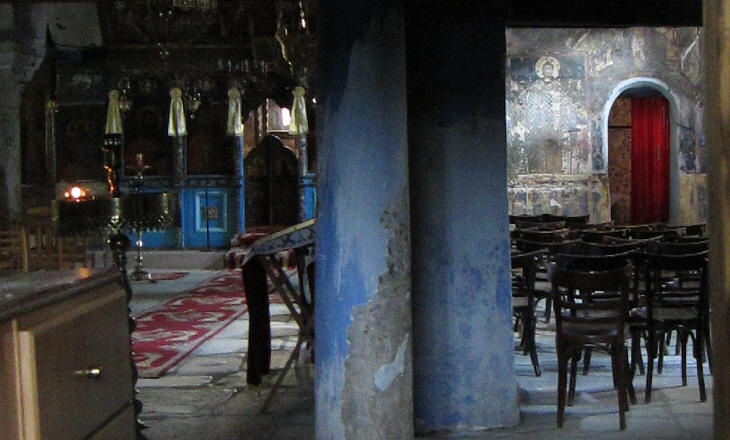 Interior of another church

The Muslim prohibition of representing human beings did not impact on the decoration of the interior of the churches; in some cases the side chapels which belonged to rich families were the most decorated part of the building. In 1912 when Veria was conquered by the Greeks it had 59 churches. 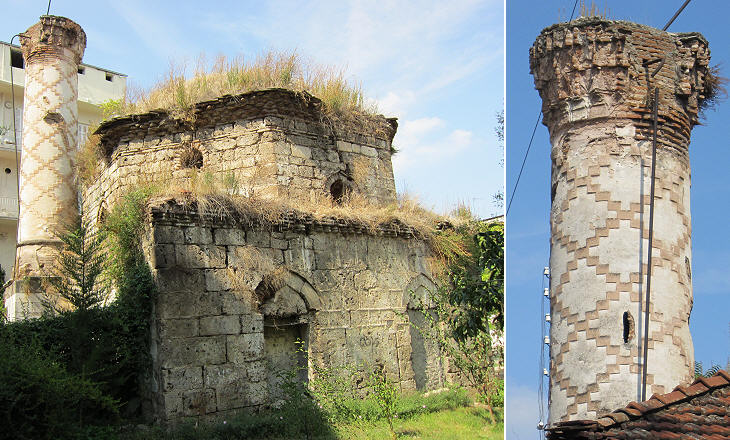 In 1923 an agreement between the Kingdom of Greece and the Republic of Turkey established the compulsory exchange of religious minorities and the Muslims of Veria left the town; their mosques fell into abandonment and the minarets were razed to the ground; a partial exception was made for those which were thought to have some artistic value. 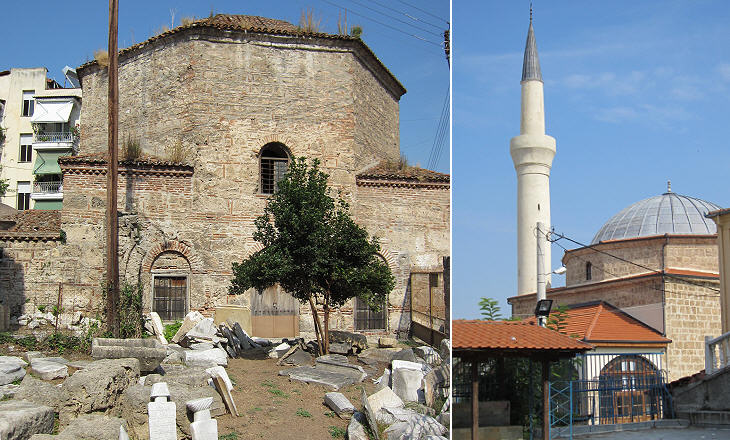 In recent years relations between Greece and Turkey greatly improved and in the same period a certain number of migrants of Muslim faith (e.g. many Albanians) settled in Veria. Authorities have allowed the restoration of a mosque and the construction of a typical Ottoman "lancet" minaret.

Other pages of this section:
Thessalonica
Philippi
Kavala
Kastoria