Nemi
(a detail of G. Vasi's Grand View of Rome) 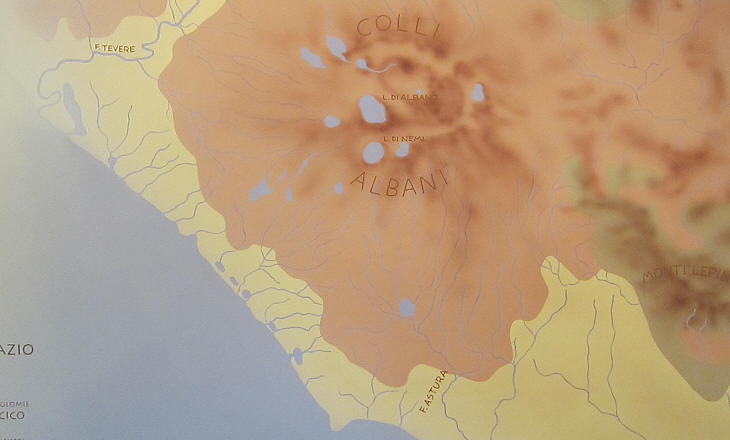 Museo Nazionale Romano; map showing the Alban Hills and their prehistoric volcanic lakes of which only Lake Albano and Lake Nemi remain

The lake was formed many centuries before the extinction of the volcano of the Alban range. We may easily imagine what an awe-inspiring place it must have appeared when the mountains around were shaken from their foundations by outbursts of incandescent lava, the skies heavy with ashes and smoke, and the thundering of the "boati" reverberating from cliff to cliff, from mountain to mountain, as far as Rome. (..) No wonder that such a frightful recess should have been selected for the seat of a mysterious worship, that of the Scythian Diana.
Rodolfo Lanciani - The Mysterious Wreck of Nemi - 1896
Roman historians make references to the existence of several small lakes in the Albani Hills, including a relatively large one near Ariccia; the lakes located between the hills and the plain were emptied by the ancient Romans or later on to reclaim the land. This was not done for Lake Albano and Lake Nemi which are located in the central part of the ancient volcanic area and are surrounded by high ridges. 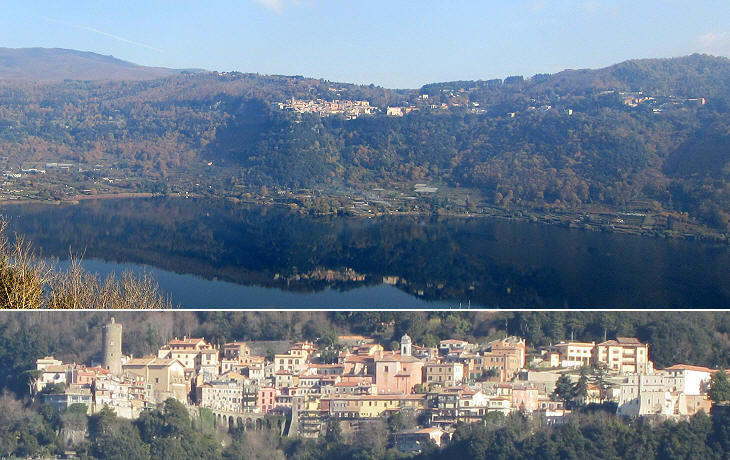 Lake Nemi (above) and Nemi (below) seen from Genzano

Above Aricia lies (..) to the left of the Appian Way, the Artemisium, which they call Nemus. The temple of the Aricians, they say, is a copy of that of the Tauropolos. And in fact a barbaric, and Scythian, element predominates in the sacred usages, for the people set up as priest merely a run-away slave who has slain with his own hand the man previously consecrated to that office; accordingly the priest is always armed with a sword, looking around for the attacks, and ready to defend himself. The temple is in a sacred grove, and in front of it is a lake which resembles an open sea, and round about it in a circle lies an unbroken and very high mountain-brow, which encloses both the temple and the water in a place that is hollow and deep.
Strabo - Geography - Book V - Translation by Horace Leonard Jones. Strabo was a Greek historian and geographer from Amasya who lived at the time of Emperor Augustus.
The temple of the Scythian Diana, to which human sacrifices were originally offered, rose in the midst of the great forest on the north side of the lake, at the foot of the craggy boulder on which the village of Nemi is now perched. Lanciani
The Latin word nemus means grove, wood so Lake Nemi was given its current name because of the thick woods which still surround it and the name was also used to indicate a very small town on the eastern side of the ridge which surrounds the lake. The medieval town was limited to the section to the left of the tall round tower (which you can see in the image used as background for this page). 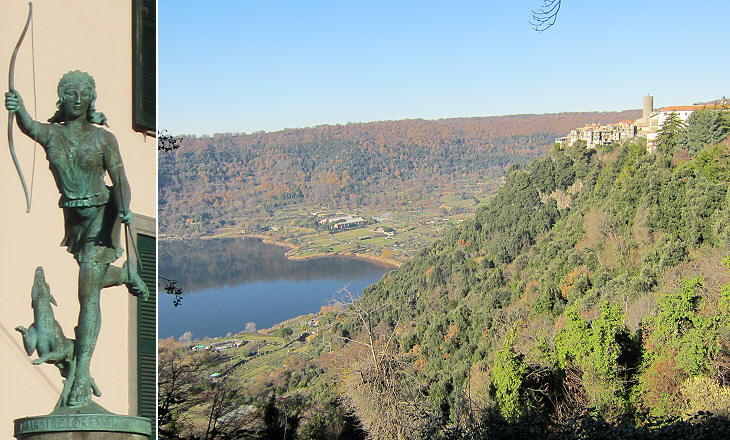 (left) Modern statue of Diana by Luciano Mastrolorenzi at the entrance to Nemi; (right) Nemi and in the background "Giardino di Diana", the low area by the lake where the temple to the goddess stood

Today's visitors to Nemi are met by a modern statue portraying Diana as Greek Artemis, the virgin huntress who was the sister of Apollo. But the Diana to whom the Latins, an ancient Italic tribe, consecrated the lake and dedicated a temple, was rather a Mother Earth goddess, a symbol of fertility, and they prayed to her to have good harvests.
Because the water level of Lake Nemi was subject to sudden changes, an underground outlet was excavated to carry the water from the lake when it exceeded a certain level in order to avoid the temple to Diana being flooded. 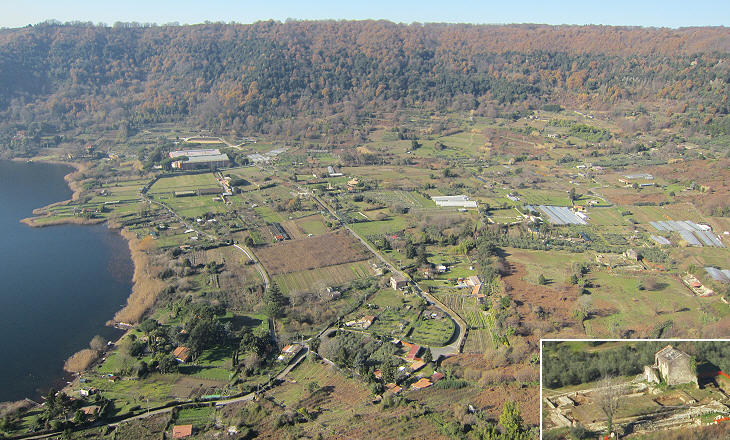 When the worship of Diana was first established on its shores, and all through the classic period of Roman history, the aspect of the place was very different from what it looks now. No villages teeming with life, no fields yielding the choicest produce of the earth, no villas, no farms, nothing but primeval forests casting their shadows over the silent waters. (..) Though nothing in the present day can exceed the beauty and loveliness of this "speculum Dianae," where fragrant strawberry fields have succeeded the ancient forest, and life and thrift the wilderness of old days, its chief celebrity has arisen from the discovery at the bottom of the lake of what was proclaimed to be a ship five hundred feet in length, and as rich and beautiful as an enchanted palace. Lanciani
The original temple built by the Latins was replaced by the Romans by a sanctuary consisting of several buildings spread over a vast area; the worship of Egyptian Isis was added to that of Diana.
Archaeologists have found only the foundations of some buildings. They have linked the absence of walls and columns to the presence in the same area of calcararia, medieval kilns where marbles and other calcareous parts of the temples were turned into lime mortar. 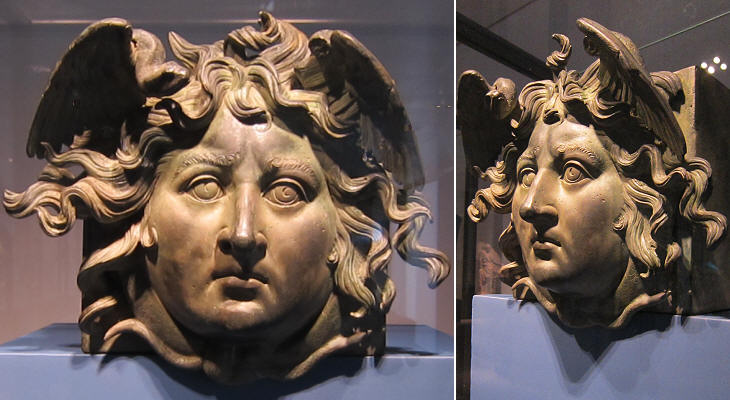 Besides insignificant attempts made frequently by local boatmen and fishermen, a regular search for the mysterious wreck has been undertaken four times, the first by Leone Battista Alberti, in ca 1437; the second by Francesco de Marchi in 1535; the third by Annesio Fusconi in 1827; the last by Eliseo Borghi in 1895, which has not yet been brought to a close. (..) The present search was undertaken in October last by three private gentlemen, with the consent of Prince Filippo Orsini, the owner of Nemi and its lake. The divers (..) brought to the surface (..) six great mooring-rings; another exquisite product of the Greco-Roman art of the first century after Christ. They are cast in bronze, and represent heads of lions, wolves, tigers and one of Medusa: this last without a ring in the mouth. The back of these "mascheroni" is made like a socket, so as to fit to the head of a beam, like a thimble to the finger. Five sockets are square, one round. The head of Medusa is perfectly beautiful: not a trace of the monstrous details which appear in archaic types, except the serpentine arrangement of the hair. The wings, which complete her toilet, are light and feathery and the coils of the snakes, graceful and artistic. Lanciani
In the XVth century rumours about the existence of something under the water of the lake led to the first attempts to understand its nature. In 1928-1932 a major effort was undertaken to almost empty the lake; two ships were found in the mud and they were moved to a specially built sort of hangar; unfortunately in May 1944, in the very last days of Operation Shingle, the Allied landing at Anzio which led to the liberation of Rome, the ships were burnt by a fire. Their bronze decoration can be seen at Museo Nazionale Romano. 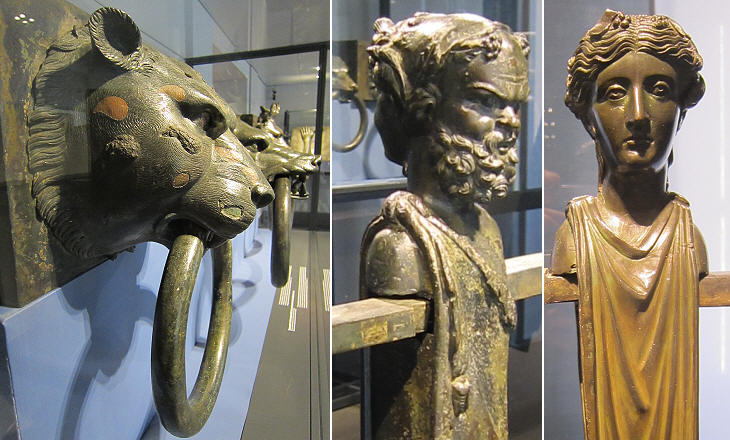 Museo Nazionale Romano: other bronze objects found on the ships

The elaborate decoration was not consistent with the initial hypothesis that the two ships were utilized for a naumachia, the re-enactment of a naval combat. In 1950 the name of Emperor Caligula was found on fistulae (lead conduits) of the ships. Suetonius and Cassius Dio, two Roman historians, say that Caligula enjoyed banqueting on a ship. The discovery of the remains of a Roman villa on the lake shore opposite the temple has led archaeologists to believe that the ships were a sort of annex to the villa. One of the ships in particular had cabins and halls, whereas the other one was probably used for ceremonies which were a re-enactment of those which occurred at the Temple of Isis at Philae, an island in the Nile River. 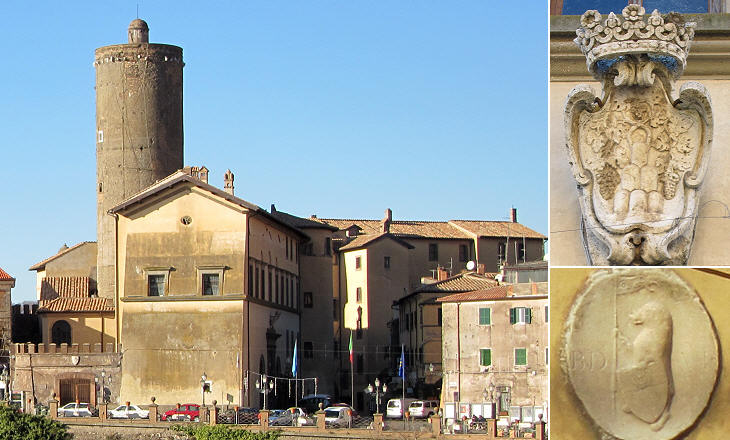 (left) Palazzo Ruspoli and Torre Colonna (or Saracena); (right) coat of arms of the Ruspoli, Princes of Vignanello, (above) and heraldic symbol of the Orsini (below)

Nemi is the smallest of the fourteen towns on the Albani Hills which are known as Castelli Romani. Its location upon a precipice ensured Nemi was easily defendable, but it limited its development. Palazzo Ruspoli is the main monument of the town; it is named after the family who bought it in 1901. The Ruspoli gave a Renaissance appearance to the palace by building a new façade. Prior to this change in 1873 Henry James wrote: I should like to spare a word for mouldy little Nemi, perched upon a cliff high above the lake; but after all, when I had climbed up into it from the water-side, passing beneath a great arch which I suppose once topped a gateway, and counted its twenty or thirty apparent inhabitants peeping at me from black doorways, and looked at the old round tower at whose base the village clusters, and declared that it was all queer, queer, desperately queer I had said all that is worth saying about it (from Italian Hours). 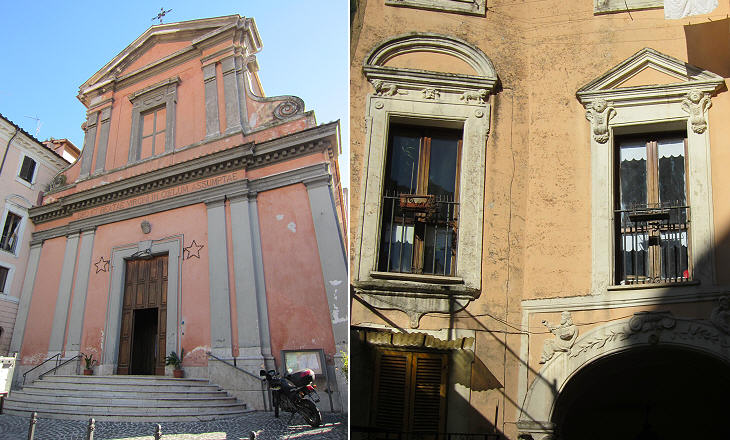 In 1572 Nemi was acquired by Muzio Frangipane, who belonged to a Roman family very important in the XIIth century, but rather a minor one in the XVIth century. Muzio and his two sons Roberto and Lello are buried in S. Marcello and their busts are a fine work by Alessandro Algardi.
In 1639 the Frangipane enlarged their palace to the detriment of the existing parish church and of some houses. They decided therefore to develop Nemi southwards by building a new parish church and some small palaces. 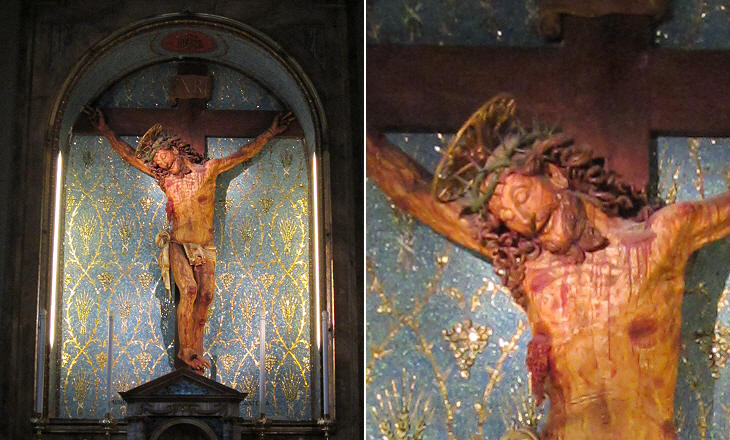 Immediately outside Nemi there is a sanctuary founded in 1645, but which became famous in 1669, when a miracle occurred. A Franciscan monk had sculptured a Crucifix on a piece of wood he had brought from the Holy Land, but he felt unable to give shape to the face of Christ and after praying for help, he fell asleep. At dawn, when he woke up, he discovered that the Crucifix had a face. 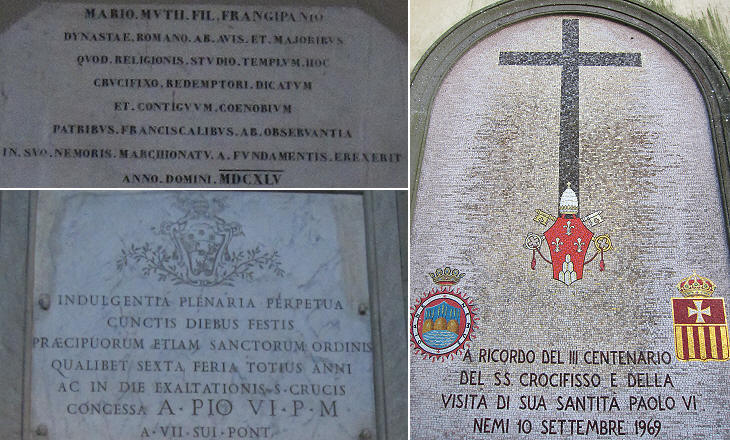 Chiesa del Crocifisso: (left-above) inscription celebrating the construction of the church by Mario Frangipane; (left-below) inscription indicating that Pope Pius VI granted indulgence on some days (his nephew was given the fiefdom of Nemi in 1786); (right) mosaic outside the church celebrating a visit by Pope Paul VI in 1969, one of the first travels by a pope outside the Vatican in the XXth century 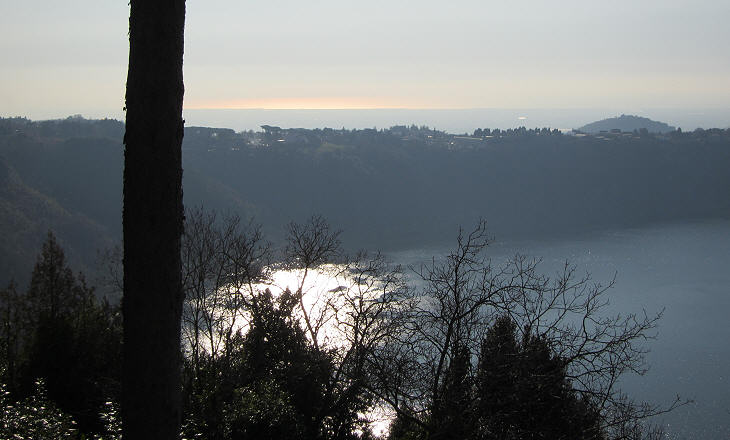 Sun reflections on the lake and on the Tyrrhenian Sea

Next step in your tour of the Environs of Rome: Genzano