(detail of a drawing by Carlo Labruzzi)

Via Appia Antica is the name given to the section of Via Appia between Porta S. Sebastiano and Frattocchie, a hamlet near Albano where it joins Via Appia Nuova which starts at Porta S. Giovanni. 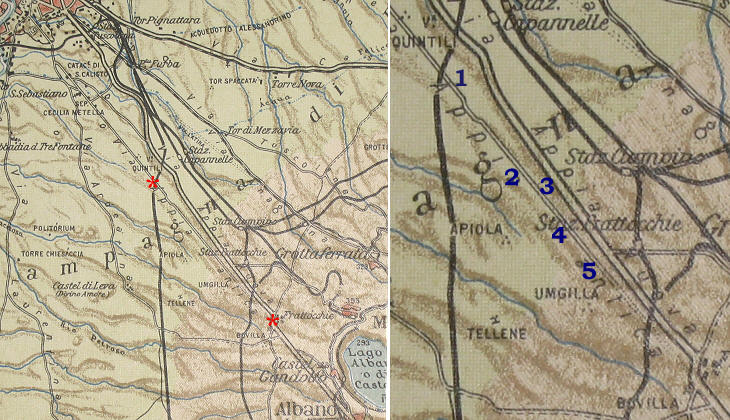 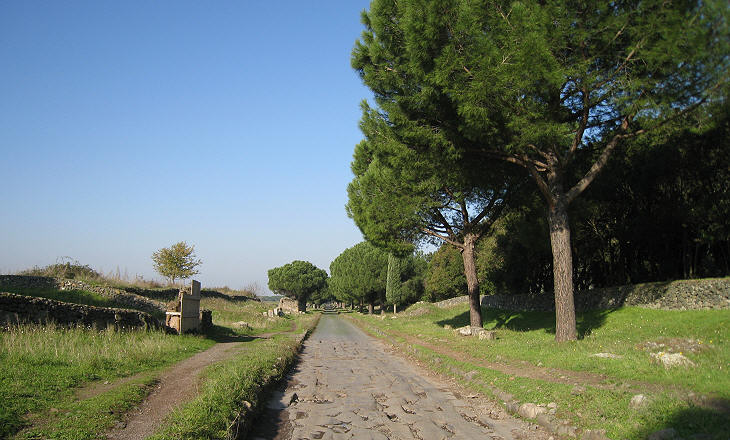 Via Appia Antica near Torre in Selci

This last section of Via Appia Antica is not flanked by imposing monuments such as Tomba di Cecilia Metella or Villa dei Quintili, but especially near Frattocchie it is indicative of how the road appeared to an XVIIIth century traveller. In recent years the use of cars to visit this section has been discouraged by uncovering stretches of the ancient road. After the crossing of a road (Via di Fioranello) which leads to Ciampino Airport Via Appia Antica is reserved to pedestrians and cyclists.

Torre in Selci (or Torre Selce)

This XIIth century tower is named after the selci (flints) which were used to build it; it stands above a mound which hides an ancient tomb. It was decorated with fragments of marble and travertine. 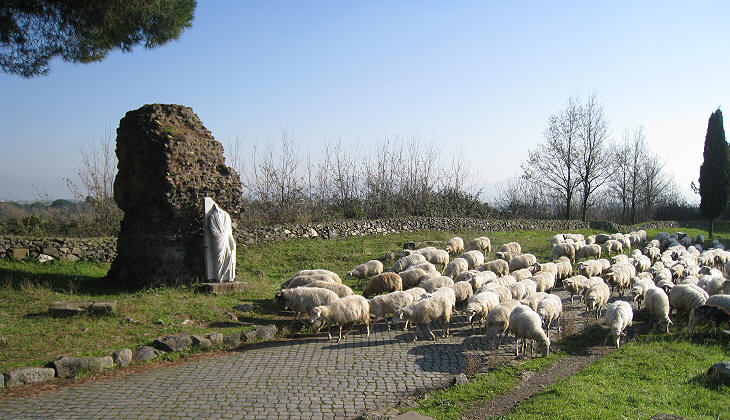 The ancient Romans are known for having been a people of warriors, yet in their funerary monuments they usually preferred to be portrayed wearing a toga, a civilian cloth. The toga was a large woollen cloak which was wrapped around the body. In origin it was most likely a smaller garment, but over time its ceremonial usage prevailed and its size increased; only Roman citizens were allowed to wear it. 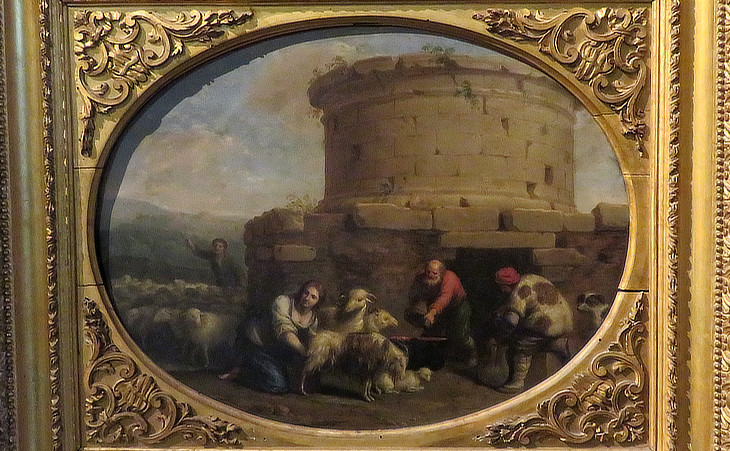 The painting is not specific about the ancient monument, but it does show a scene which occurred along Via Appia until the XIXth century as tombs were used as shelters for sheep. The most imposing ruins of Roman aqueducts are located at some distance to the north of Via Appia, whereas in the proximity of the road one can see a section of the aqueduct of Villa dei Quintili. Inscriptions, reliefs and fragments of decoration can be seen also in this section of Via Appia Antica, although not to the same extent as in those closer to Rome. A very lengthy inscription near Torre in Selci can be seen in a page on the historical shops of Rome. 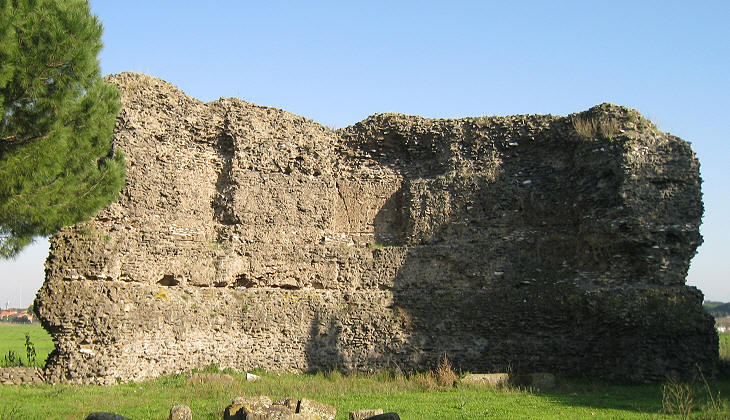 The original meaning of exedra is a building or part of building with outdoor seats; in Roman architecture it mainly indicated a semicircular wall adorned with statues. The exedra shown above was most likely part of a large funerary complex where the mourners rested; the niches which housed statues are still noticeable. 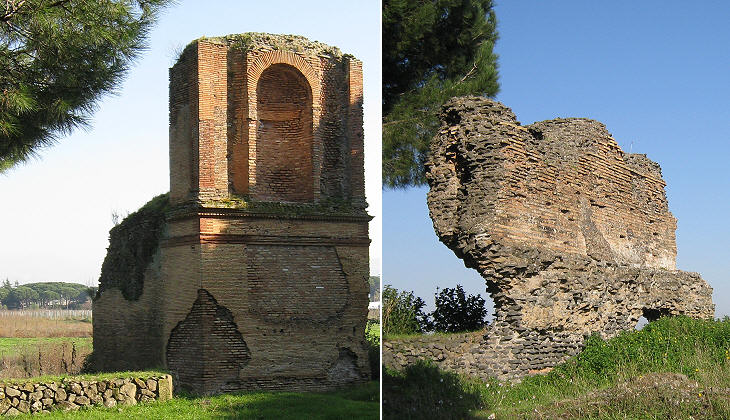 The size and design of the funerary monuments along Via Appia varied greatly depending on the importance and financial condition of the dead and the kind of tomb which was in fashion at a certain time. Two examples of a "compact" tomb which responded to several requirements are shown above; they were small brick buildings with two chambers one above the other: the lower one (hypogeum) had niches for urns containing the ashes of the dead or loculi, recesses for their buried remains. The upper one was used for funerary rites. The decoration was made with specially shaped and coloured bricks; a statue of the family leader was placed in the central niche to represent all dead family members. 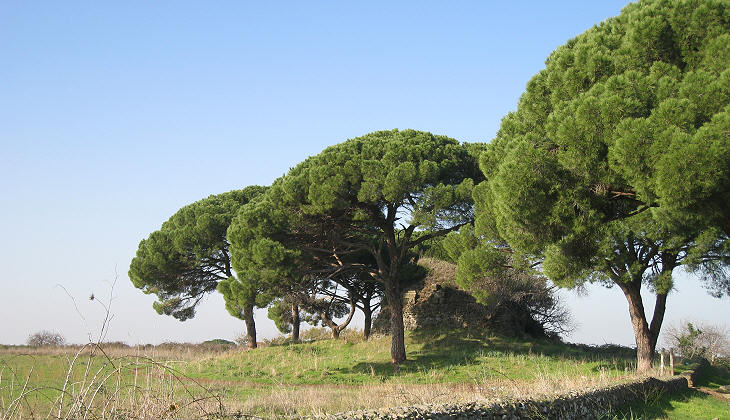 The sections of Via Appia Antica which are closer to Rome are flanked by upper class private properties; high walls prevent seeing the ruins of the tombs which were built behind those on the very edge of the road. In this section the secluded villas are replaced by farms; their owners are not obsessed with privacy and security and it is possible to trespass in the private property to take a look at these tombs. 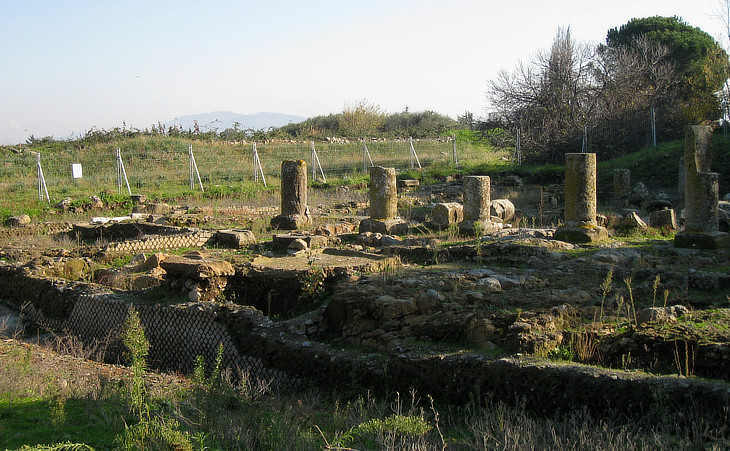 According to tradition and based on a reference in Epigram IX, 64 by the Latin poet Martial Emperor Domitian built a temple to Hercules at this point of Via Appia Antica. Archaeologists tend to believe the building to belong to an earlier period, because of the usage of peperino columns rather than marble or travertine. It is also possible that the columns were part of a marketplace. 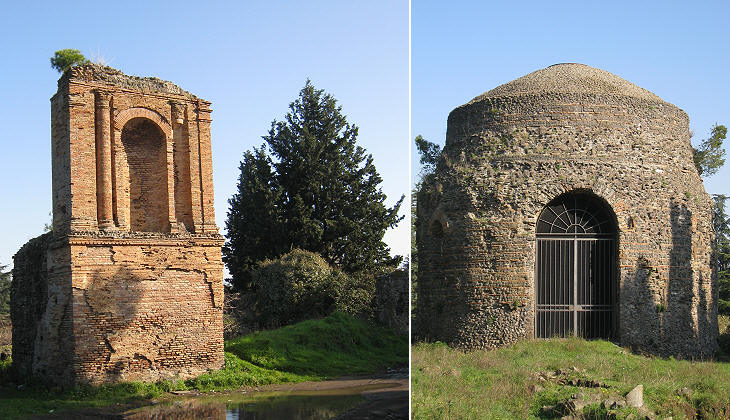 Quintus Verannus was a Roman general who ended his career as governor of Britain where he died in 57 AD; according to a now lost inscription he was buried in this well preserved brick tomb. Close to this building there is a later (IVth century) circular tomb which was converted into a little church and then used as a granary; most likely it was surrounded by a porch. Both buildings were the subject of many paintings and prints. 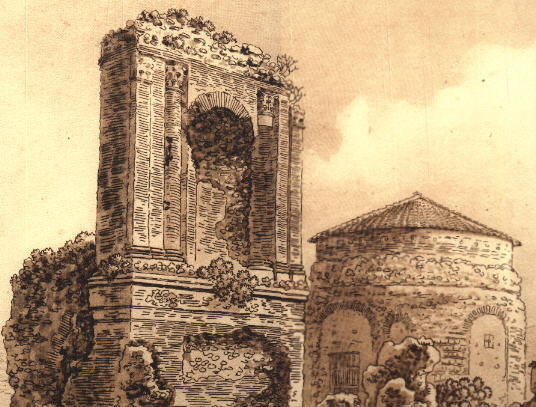 In 1789, Sir Richard Colt Hoare a rich Englishman, admirer of Horace, decided to follow the itinerary described by the poet in Satire 5 of Book 1, a record of the journey he made to Brindisi in 38 BC.
Colt Hoare invited Carlo Labruzzi, a young painter and draughtsman, to join him on his journey along Via Appia and to draw its main monuments for him (see Labruzzi's drawings of Grotta di Tiberio at Sperlonga and of the theatre of Minturnae).

You can see these other sections of Via Appia:
from S. Sebastiano to Cecilia Metella
from Cecilia Metella to Torre in Selci
or you can move on to Albano.