Montepulciano p.3: Along the Corso
(Detail of the Cathedral of Orvieto) 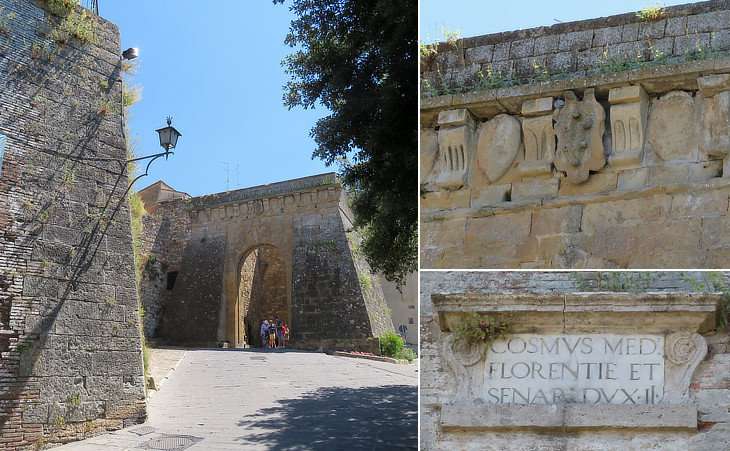 (left) Porta al Prato; (right-above) coat of arms of the Medici; (right-below) inscription celebrating Cosimo I as Duke of Florence and Siena on the bastion protecting the gate (ca 1559)

At Montepulciano there are more palaces and more churches, than at Pienza; but the intellectual beauty of symmetry was replaced by a picturesque and precipitous confusion. 'Goshl' said Lord Hovenden expressively, as they slid with locked wheels down a high street that had been planned for pack-asses and mules. From pedimented windows between the pilasters of the palaces, curious faces peered out at them. They tobogganed down, through the high renaissance, out of an arch of the Middle Ages, into the dateless and eternal fields. From Montepulciano they descended on to Lake Trasimeno.
A. L. Huxley - Those Barren Leaves - 1925
The arch mentioned by Huxley is actually the northern gate of the town and it was designed by Antonio da Sangallo the Elder, an expert military architect, in ca 1519 when he established his residence at Montepulciano to supervise the construction of Madonna di S. Biagio, a large church outside the walls. 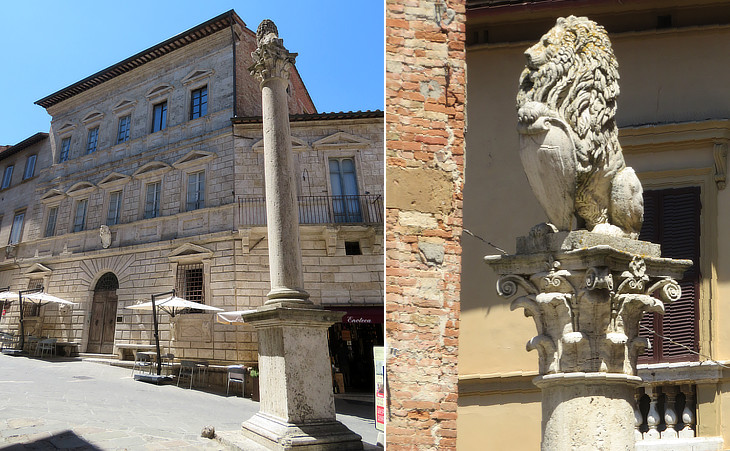 (left) Palazzo Avignonesi and Colonna del Marzocco; (right) the Lion, symbol of Florence; it was placed also on a well in Piazza Grande; the column calls to mind those which the Venetians placed in Piazza S. Marco and in many towns of their Republic, e.g. at Chioggia

The town of Montepulciano stands on the top of a mountain and tho but a small place has some handsome buildings.
Thomas Nugent - The Grand Tour - 1749
Lord Hovenden crossed the town through the high street from the southern higher end to the northern lower one. The "corso", a name which is used in many Italian towns to indicate the high street (after Via del Corso in Rome), at Montepulciano is divided into three legs: Via di Gracciano nel Corso, Via di Voltaia nel Corso and Via dell'Opio nel Corso, starting from Porta al Prato and this page describes it in the same order.
Palazzo Avignonesi is one of the finest Renaissance palaces of Montepulciano. It was built between 1542 and 1572 and its design is attributed to Jacopo Barozzi aka il Vignola, a leading architect of his time (see Palazzo Farnese di Caprarola). 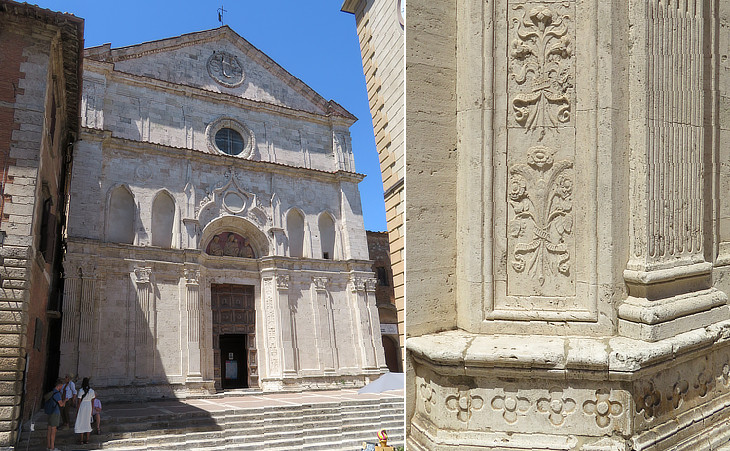 Michelozzo applied himself in his youth to sculpture under Donatello, and also to design; and although he realized their difficulties, nevertheless he went on ever practising so diligently with clay, with wax, and with marble, that he ever showed ability and great talent in the works that he made afterwards. There was one art in which he surpassed many and even his own self, for, after Brunellesco, he was held to be the most methodical architect of his times, and the one who was best able to arrange and contrive palaces, convents, and houses for human habitation, and who designed them with the greatest judgment.
Giorgio Vasari - Lives of the most eminent painters, sculptors and architects - translated by Gaston Du C. De Vere - 1913
The two lower orders of the marble façade were designed by Michelozzo in ca 1430. They show full Renaissance features (below) with some Gothic elements (above). The combination of the two styles can be noticed also in the decoration of the portal. Michelozzo's design is interesting also because the façades of many churches of Florence and of other towns of Tuscany, including the Cathedral of Montepulciano were never completed. 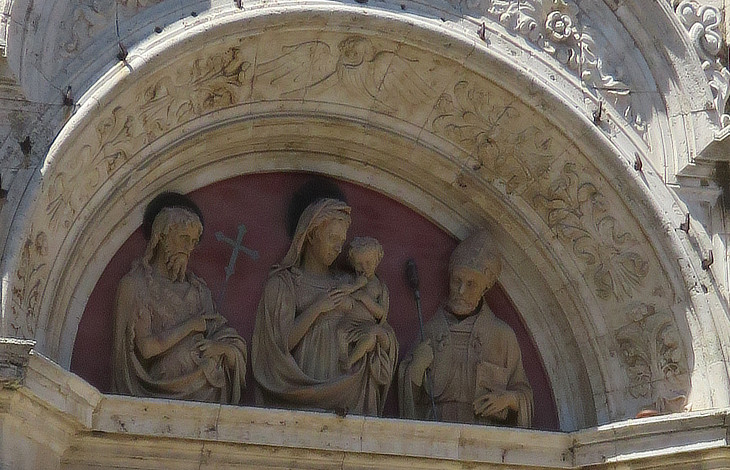 S. Agostino: statues of the Virgin and child flanked by St. John and St. Augustine by Michelozzo

Michelozzo is credited with being the sculptor of a fine funerary monument inside the Cathedral, which, similar to other of his works, was initially attributed to Donatello. The interior of the church was redesigned in the XVIIIth century. 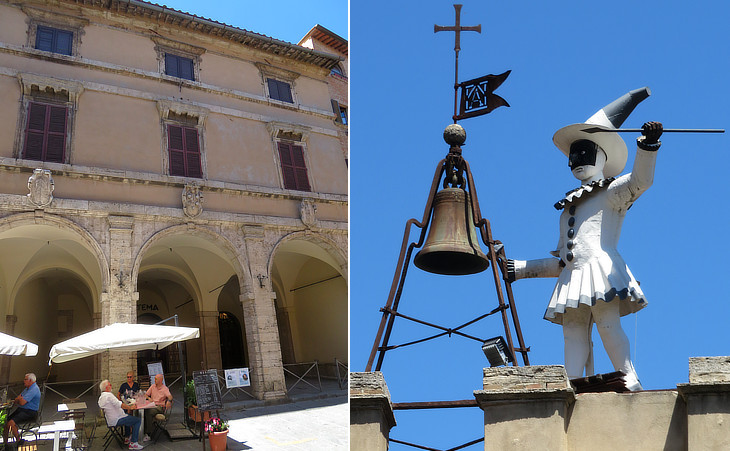 Piazza delle Erbe was the market square of Montepulciano at approximately the midpoint of the Corso. Cosimo I de' Medici built a loggia in Florence to shelter the sale of silk and luxury goods (today known as Loggia del Porcellino) and he promoted the construction/improvement of similar facilities in other towns of the Duchy, e.g. at Castiglion Fiorentino. That at Montepulciano is attributed to il Vignola or to Ippolito Scalza, an architect from Orvieto who most likely enlarged and redesigned the Cathedral. 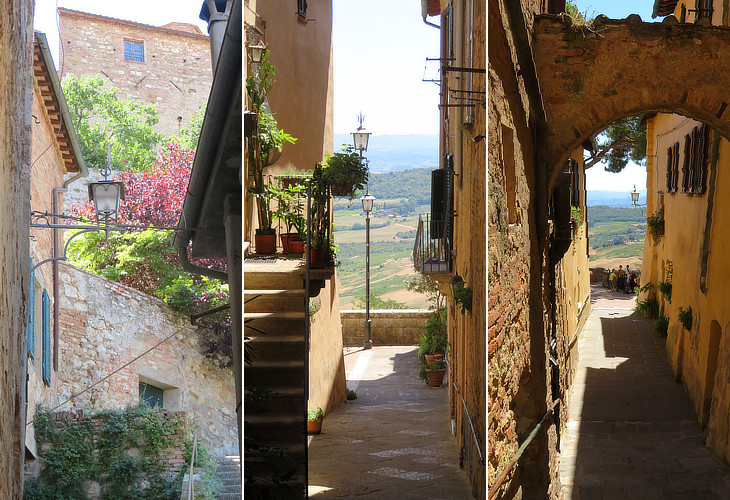 Streets departing from the Corso

It is only by going off the track that you get to know the country. See the little towns - Gubbio, Pienza, Cortona, San Gemignano, Monteriano. And don't, let me beg you, go with that awful tourist idea that Italy's only a museum of antiquities and art. Love and understand the Italians, for the people are more marvellous than the land. (..) She went to the library and took out the large atlas, for she wanted to know about Monteriano. The name was in the smallest print, in the midst of a woolly-brown tangle of hills which were called the "Sub-Apennines."
E.M. Forster - Where Angels Fear to Tread - 1905
Monteriano, the imaginary town of Forster's first novel, is usually identified with San Gimignano, but for some aspects, the writer probably had in mind Montepulciano. Some scenes of the 1991 movie starring Rupert Everett were shot at Montepulciano. Several of the palaces in the town are by the same great architect, Sangallo.
John Murray - Handbook for travellers in central Italy - 1853
The palace has a very Florentine appearance because of the use of bugnato, a decoration based on bugne, large stones projecting from the walls which is typical of Florentine palaces. Because the last section of the Corso is rather narrow and steep, Sangallo created a small square before the entrance. The palace was built for the Cervini before the election of Pope Marcellus II who died after just 22 days of pontificate. 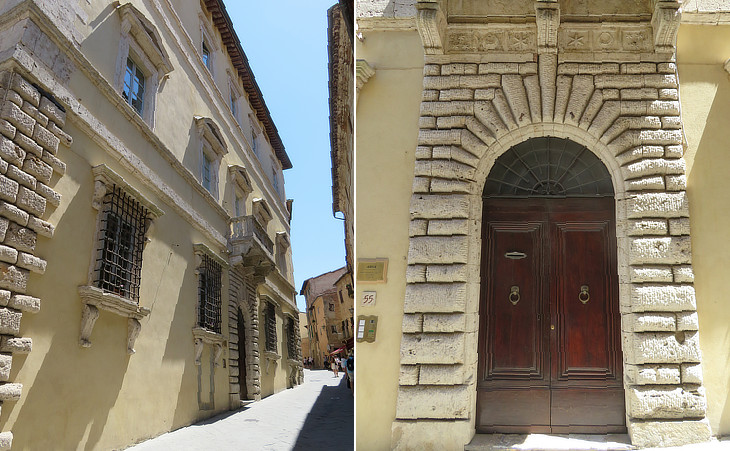 (left) Palazzo Gagnoni Onetti Grugni; (right) its portal with the heraldic symbols of the Gagnoni

The Gagnoni, rich landowners with estates at Montepulciano and near Siena, were first enlisted among the noble families of Siena and in the XVIIIth century among those of Florence. The crescent moon, one of the heraldic symbols they chose for their coat of arms, was peculiar of two of the most noble families of Siena, the Tolomei and the Piccolomini. The crescent moon is shown in the image used as background for this page. 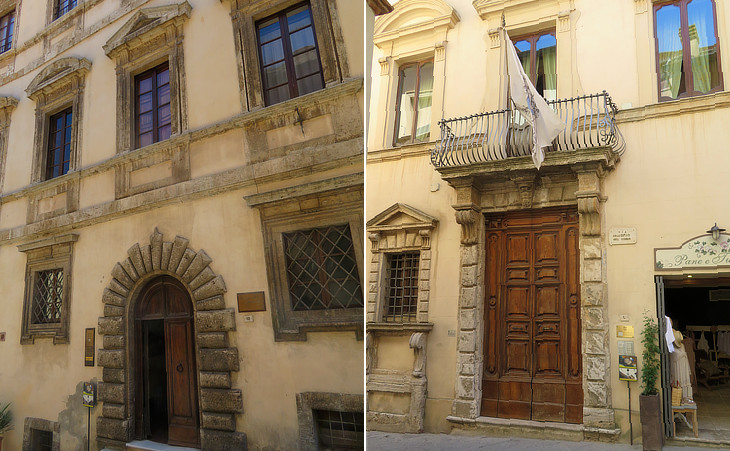 The textile industry was vital for the economy of Florence and of the Grand Duchy of Tuscany. In the early XVIIth century it experienced a rapid decline for the expansion of the Venetian cloth industry and for the effects of the Thirty Years's War which helped the development of the Dutch one. The Medici Grand Dukes turned their attention to agriculture and through various means they developed it. Their villas were decorated with frescoes and oil paintings showing new varieties of apples, peaches and pumpkins. This continued effort made Tuscany a very well farmed land. At Montepulciano many of the noble palaces along the Corso had (and many still have) large cellars for storing bottles or barrels, because their owners were personally involved in the production of wine. 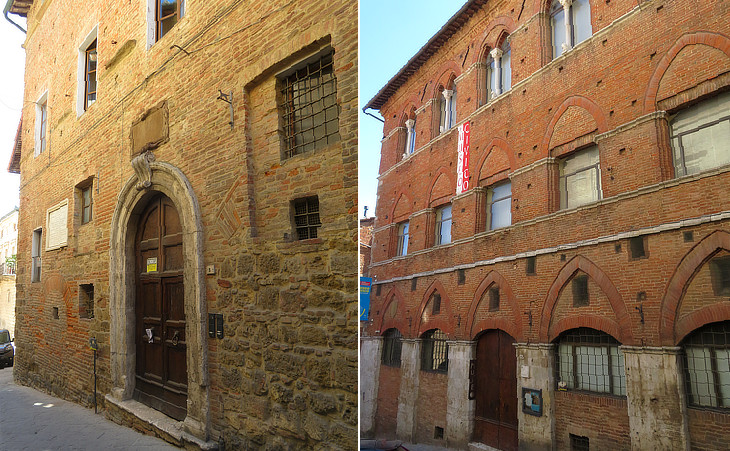 (left) Casa del Poliziano along the Corso; (right) Palazzo Bombagli Neri-Orselli (in Via Ricci); Siena has many Gothic red brick buildings which might have influenced the design of the palace

Montepulciano was the birth-place of Cardinal Bellarmine and of the poet Angelo Ambrogini (1454-1494) the friend of Lorenzo dei Medici, who hence received his name of Politian.
Augustus J.C. Hare - Cities of Northern and Central Italy - 1876.
Politian closed his tragedy Orpheus with a hymn to Bacchus and wine.
Bacchus ! we all must follow thee !
Bacchus ! Bacchus ! Ohe ! Ohe !
With ivy coronals, bunch and berry,
Crown we our heads to worship thee !
Thou hast bidden us to make merry
Day and night with jollity !
Drink then ! Bacchus is here ! Drink free,
And hand ye the drinking-cup to me !
(..)
Cry Bacchus ! Cry Bacchus ! Be blithe and merry,
Tossing wine down your throats away !
Let sleep then come and our gladness bury :
Drink you, and you, and you, while ye may !
Dancing is over for me to-day.
Let everyone cry aloud Evohe !
Bacchus ! we all must follow thee !
Bacchus ! Bacchus ! Ohe ! Ohe !
Translation by John Addington Symonds in Sketches and studies in Italy - 1879 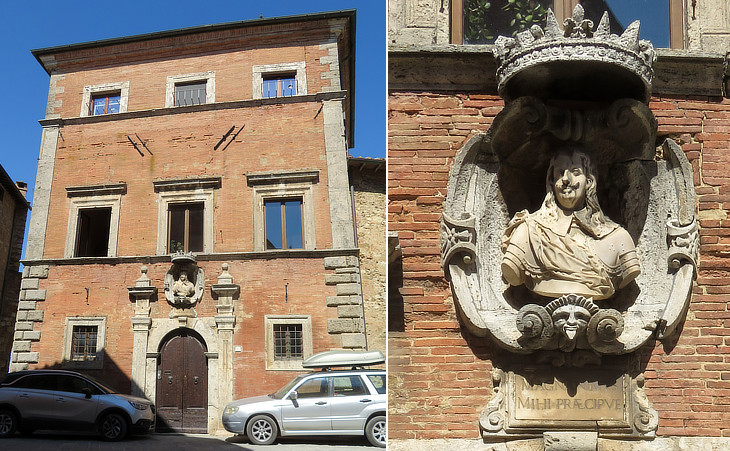 (left) Palazzo Benincasa (in Via Ricci - XVIth century); (right) bust of Grand Duke Gian Gastone de' Medici (1671-1737), the last of his family, with inscription "Magnanimus Mihi Praecipue" (I most care about being magnanimous)