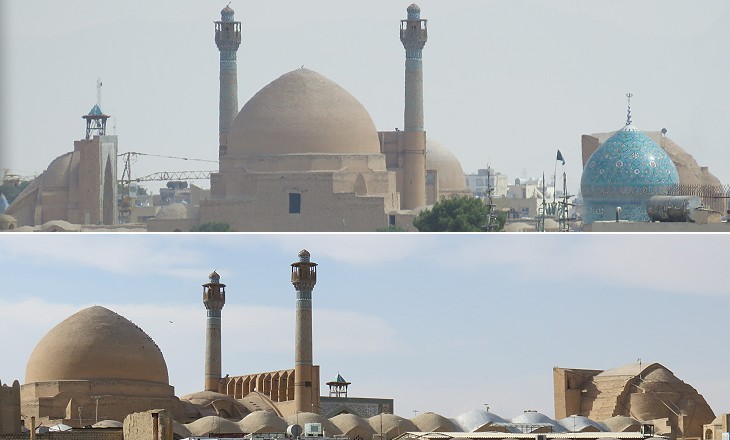 Friday Mosque complex having four iwans seen from: (above) the Safavid city centre (the blue dome belongs to a modern mosque); (below) from Hatef Street

One could explore (the monuments of Isfahan) for months without coming to the end of them. From the XIth century, architects and craftsmen have recorded the fortunes of the town, its changes of taste, government, and belief. (..) A few illustrate the heights of art independently, and rank Isfahan among those rarer places, like Athens or Rome, which are the common refreshment of humanity.
Robert Byron - The Road to Oxiana - Macmillan 1937 (piece written in 1934).
In 1051 Isfahan became the capital of the Seljuks who redesigned the city around a new large Friday Mosque. In 1602 Safavid ruler Shah Abbas moved the focal point of Isfahan to Naqsh-e Jahan (Image of the World), a very large square to the south of the old city centre. 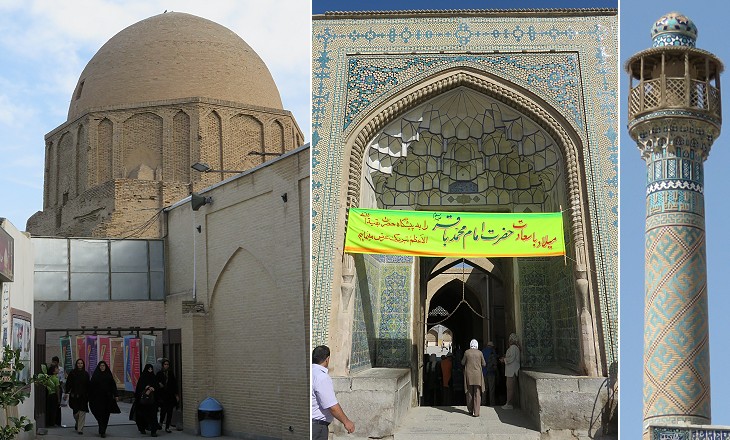 What distinguishes the Friday Mosque from that built by Shah Abbas in 1602 is that the latter is preceded by a gigantic portal, while the former is almost hidden in a maze of narrow streets and its entrances are pretty small. Only the dome of the main prayer hall indicates the presence of a large mosque, actually a complex of buildings including a second domed prayer hall (which you can see in the introduction to this section) and four iwans.
In the XIth century the use of ceramic decoration was largely limited to turquoise tiles forming words, such as those one can see on the shaft of the minarets. All other types of ceramic decorations were added in the following centuries. The domes were left without decoration perhaps because they were hardly visible from the courtyard around which the complex is built. 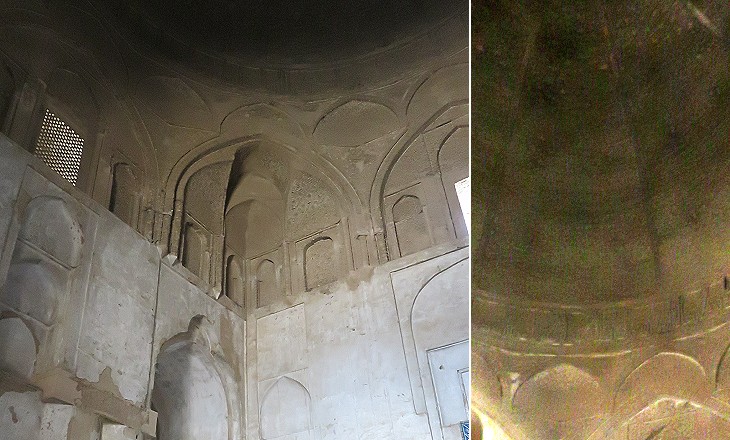 Friday Mosque - interior of the main prayer hall: (left) niches of the drum; (right) ribs of the vault (emphasized)

In 1068 Seljuk ruler Alp Arslan invaded Byzantine territories in Anatolia and seized Caesarea in Cappadocia (today's Kayseri). In 1071 he defeated Emperor Romanos IV at the battle of Manzikert. Similar to Emperor Valerian in 260, Romanos was taken prisoner, but unlike Valerian he was subsequently freed. It is possible that Malikshah, who succeeded his father Alp Arslan in 1072, wanted to have a dome in his capital which could stand comparison with that of Hagia Sophia at Constantinople, where Byzantine Emperors were crowned.
The dome of the Friday Mosque was completed in 1080 and marks a significant achievement in the history of architecture, as the Seljuks built a large dome which rests on an apparently very light structure. 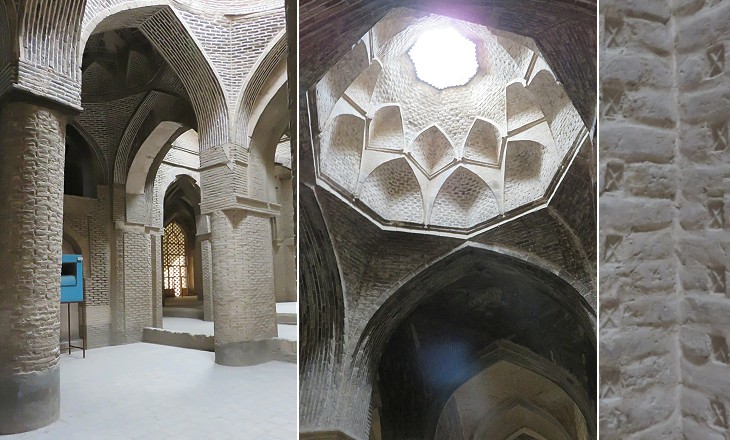 Friday Mosque: (left/centre) details of the prayer rooms adjoining the main one; (right) bricks marked in the same way as at Zavareh

The covered areas extending between the iwans are halls comprising of a series of small domes, mostly built in the XIIth century. The piers of these halls differ in shape and thickness as structural supports were added to them over time. There is a variety of open and closed vaults of different forms and arrangements, with a prevalence of octagonal ones. The use of pointed arches and ribs in this and other Seljuk buildings is believed to have had a bearing on the development of Gothic architecture after the First Crusade (1096-99).
The image used as background for this page shows a detail of a decorative element including a swastika, a symbol found in Persia as early as the Ist millennium BC. 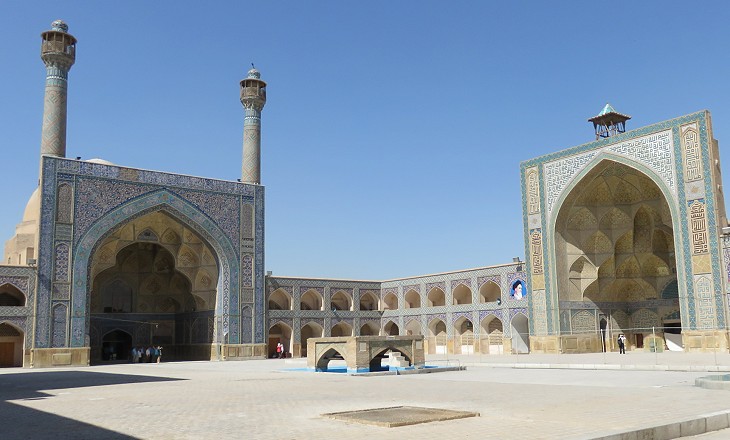 The courtyard with its four imposing iwans makes up for the lack of magnificence of the Friday Mosque exterior. Some iwans were enlarged after Persia was invaded by Timur in the late XIVth century and they recall those of Registan at Samarkand, the capital of the Timurid Empire. The double-story arcade surrounding the courtyard was added in 1447 and it replaced the original one-story arcade. It has a unifying effect on the whole courtyard, so that one does not notice that the four iwans are different in size and shape. 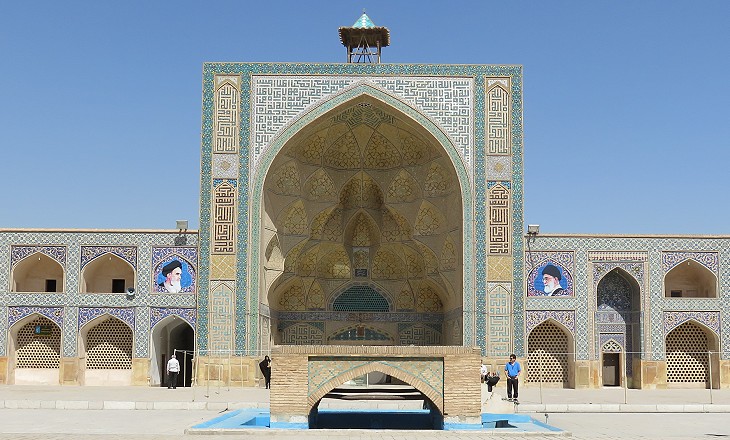 A major restoration of the iwans was carried out in the 1950s. While two of them lead to the domed prayer halls, the other two lead to educational institutions. This may explain differences in their decoration; that of the Ustadh Iwan is based on blue tiles on a yellow background which form sentences from the Qur'an. Similar decorations can be seen at a mausoleum built by Timur at Chakhrisabz, his hometown.

Isfahan is one of the largest and fairest of cities, but the greater part of it is now in ruins, as a result of the feud between Sunnis and Shi'ites, which is still raging there.
H. A. R. Gibb - Selection from the Travels of Ibn Battuta in 1325-1354
At the beginning of the XIIIth century Persia was invaded by the Mongols. Their empire soon split into separate khanates. In 1295 Ghazan, ruler of the khanate which included Persia (aka Ilkhanate), embraced Islam and added Mahmud to his name. In 1310, during the reign of Muhammad Oljeitu, successor to his brother Ghazan, a very elaborate mihrab was placed in a prayer room inside Ustadh Iwan. Its decoration is unique for Isfahan, but it can be seen at the Friday Mosque of Ardestan and in other towns which were part of the Ilkhanate, such as Sivas in eastern Turkey. Oljeitu embraced Sh'ia Islam in 1310. Ilkhanate rulers set their capital in the north of Persia and the main monuments they built are there, e.g. the Mausoleum of Oljeitu at Soltaniyeh. 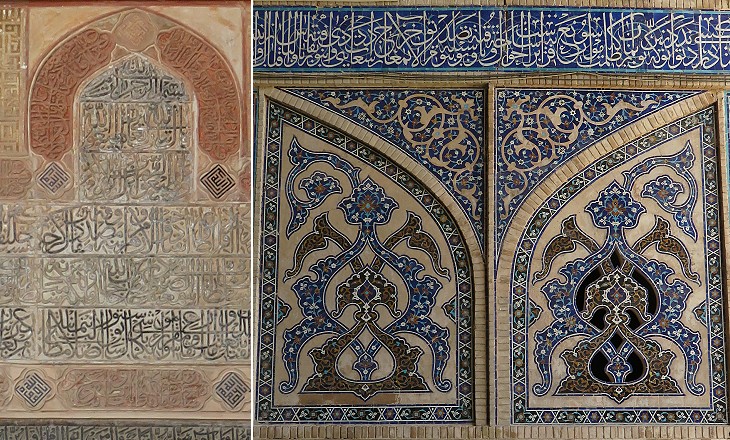 Friday Mosque: other details inside Ustadh Iwan of the Seljuk/Ilkhanate (left) and Safavid (right) periods

Calligraphy is a key feature of Islamic art. Arabic can be written in different scripts, the best known being the Kufic one which is characterized by straight angles. Kufic inscriptions were often embellished with floral motifs. In other cases the geometric aspect of Kufic was emphasized to write short sentences inside a square space. In some locations as at Diyarbakir in eastern Turkey these maze-like inscriptions were placed on almost all notable buildings.
Other scripts were developed to replace/complement the Kufic one. Naskh and Thuluth scripts are a sort of cursive with diagonal lines crossing letters; they are so elaborate that there is no need for additional decoration. 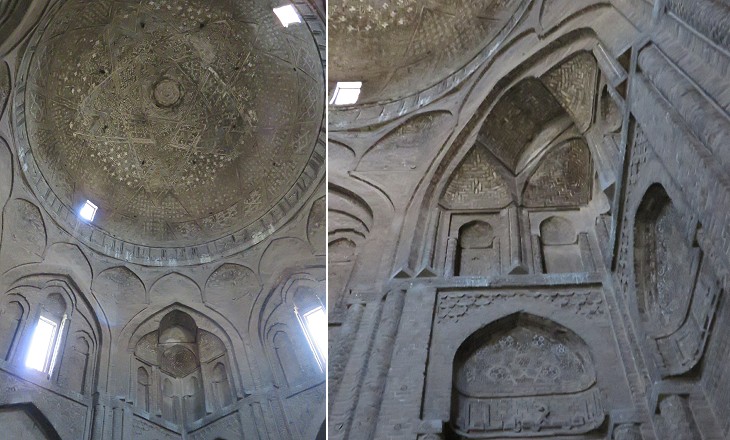 The smaller (prayer hall) embodies that precious moment between too little experience and too much, when the elements of construction have been refined of superfluous bulk, yet still withstand the allurements of superfluous grace; so that each element, like the muscles of a trained athlete, performs its function with winged precision, not concealing its effort, as over-refinement will do, but adjusting it to the highest degree of intellectual meaning. This is the perfection of architecture, attained not so much by the forms of the elements - for this is a matter of convention - but by their chivalry of balance and proportion. And this small interior comes nearer to that perfection than I would have thought possible outside classical Europe.
Robert Byron - The Road to Oxiana - Macmillan 1937 (piece written in March 1934)
The northern dome rests on a square base with an octagonal transitional zone formed by four squinches*, on top of which rests another zone of sixteen arches with a drum comprising of a band with religious inscriptions. Its decoration is entirely based on bricks which create a multitude of patterns through their varied alignments and projections.
* a straight or arched structure across an interior angle of a square building. 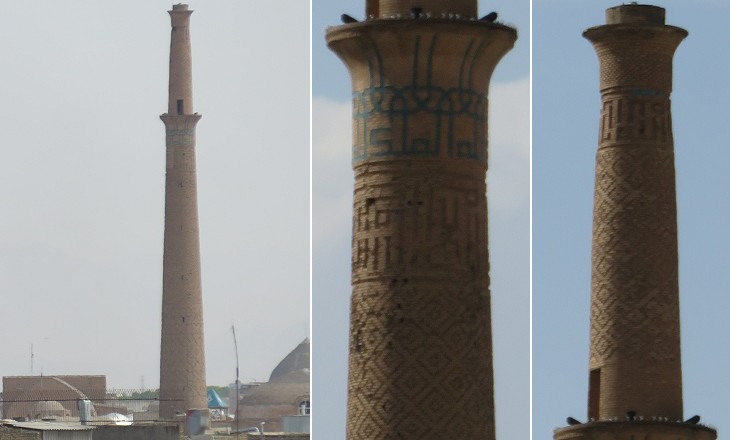 The Ali Mosque and Minaret were built in the mid-XIIth century not far from the Friday Mosque. The minaret retains its Seljuk decorative brickwork while the mosque was largely rebuilt and redecorated in the XVIth century. It is about 48m/157ft tall and has a tapering cylindrical shaft interrupted by two balconies. The shaft below the balconies is decorated with a pattern of diamonds. It has four bands of Kufic inscriptions, which all were highlighted with glazed turquoise tile work. The circular section of this and other Seljuk minarets of Isfahan is rather unusual, because most minarets of that period had a square section as at Silvan in eastern Turkey. 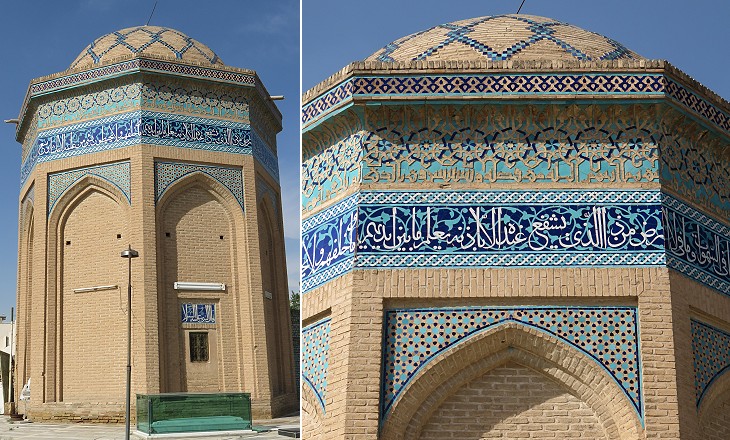 Jafar ibn Morteza Mausoleum (you may wish to see how it was in 1934 - Photo by Robert Byron - Copyright Conway Library, Courtauld Institute of Art - it opens in another window)

This poorly restored mausoleum was built in 1320 during the Ilkhanate period. Unfortunately it has lost its 1934 time-worn aspect. Its design is similar to that of many other Seljuk mausoleums, including Gunbad-i Ali at Abarquh. They usually had an octagonal shape and a pyramidal or domed roof.