Tabriz: The Blue Mosque
(IIIrd millennium BC stone relief at the Azerbaijan Museum of Tabriz) 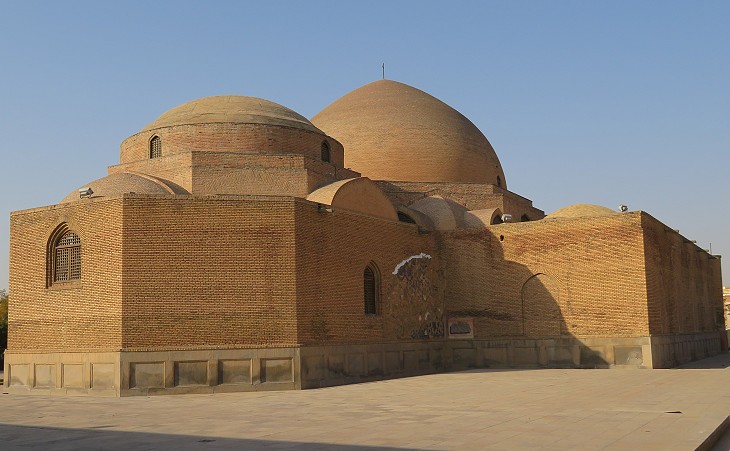 The most magnificent and the biggest mosque stands as you go out of the Town, in the Road to Ispahan. The Persians will not come near it, but look upon it as defil'd, and a Mosquee of Hereticks, in regard it was built by the Sounnis, or the followers of Omar.
Jean-Baptiste Tavernier - Travels through Turkey and Persia (1630s-1650s)
Close to the walls, near the Teheran gate, is the complete ruin of a mosque, but still sufficiently preserved to show how fine a structure it must once have been.
James Justinian Morier - A Journey through Persia, Armenia, and Asia Minor, to Constantinople, in the years 1808 and 1809 - 1816
The layout of the mosque/mausoleum complex has a T shape which is typical of early XVth century Ottoman buildings at Bursa, e.g. Muradiye Camii and Yesil Camii (Green Mosque) and it is not preceded by the large sahn (courtyard) with four iwans (gigantic niches) which characterizes the main Persian mosques, e.g. the Friday Mosque of Isfahan. Fragments of the external decoration of the mausoleum

It is lin'd without with Brick-work varnish'd with different Colours (..) and abundance of Cifers and Arabian Letters in Gold and Azure. Tavernier
The most interesting ruin is that of an old mosque just outside the walls, near the Tehraun gate, said by some to have been built by Jehan Shah, one of the descendants of Tamerlane. It was destroyed by the last earthquake, but the remains exhibit some beautiful specimens of mosaic in lacquered bricks, and also some very fine slabs of what is called Tabreez marble, a petrescent deposit from a spring near Maraugha.
William Richard Holmes - Sketches on the Shores of the Caspian - 1845
The construction was initiated in 1465 by Jehan Shah, leader of the Kara (Black) Koyunlu (Sheep) confederation of Turkish speaking tribes, and it was completed in ca 1490 after Tabriz was conquered by the Aq (White) Koyunlu tribes. These confederation of tribes ruled also over regions of today's Eastern Turkey, e.g. at Mardin, Diyarbakir and Harput and therefore had contacts with the Ottoman Empire. 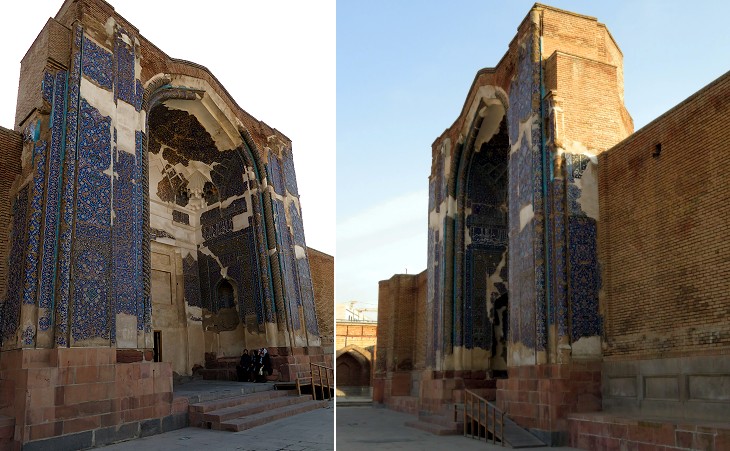 The great tile decorated portal (pishtaq), of a size with much exceeds that of the building it gives access to, is typical of Islamic architecture, in particular of that which flourished in Samarcand during the rule of Timur (aka Tamerlane) and his successors, in which tile decorated portals are the key architectural element of the three medrese at Registan and of other monuments, e.g. the Bibi Khanoum complex. Relief decorated pishtaq are a feature of Seljuk buildings, e.g. at Kayseri and Divrigi. 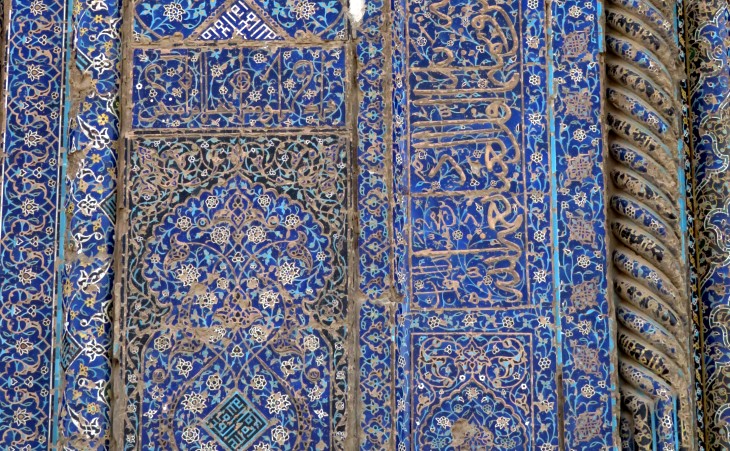 Portal: detail of its left side; see an enlargement of this image in the introductory page and a very similar decoration at the Ak Saray (White Palace) of Chakhrisabz, the hometown of Timur

Another sight of Tabriz is the Blue Mosque, or Goeg Mesjid (..). Though ruined by earthquakes, the magnificence of it when new and perfect is yet evident. "The Mirror of Cities", a Persian work, says "The like of it there was not on earth". (..) As it is a Sunni mosque, it is neglected by the Shiahs. A few years ago it was a dog-kennel, but later a door was put up. It is kept locked, probably as much to obtain bakshish from travelers as for any other purpose.
Samuel Graham Wilson - Persian Life and Customs - 1895
Goeg is today's Turkish Gok, but at the Gok Medrese of Sivas and Tokat the term indicates turquoise, whereas at Tabriz the prevailing tint is much darker. 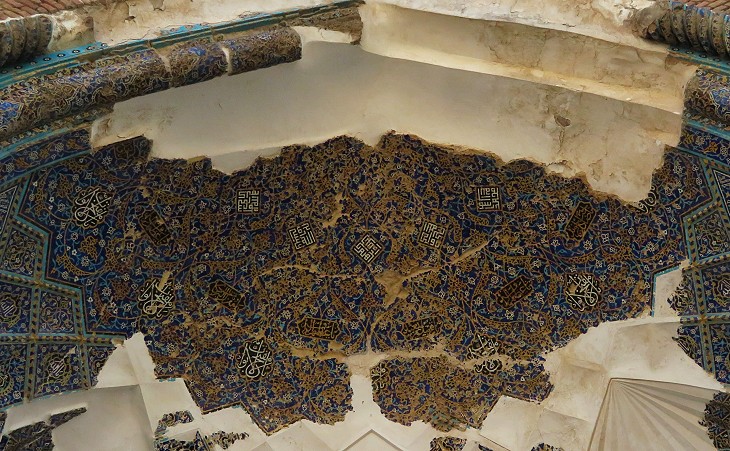 Portal: detail of the niche; the image used as background for this page shows one of the squares containing religious sentences forming a maze, similar to those which can be seen at Diyarbakir

It is an imposing arched structure, covered inside and out with glazed tiles of various colors - blue and white prevailing - wrought into symmetrical figures. Over the arched doorway, and along the base of the arches in the interior, verses from the Koran in arabesque figures are written in the tiles. Wilson 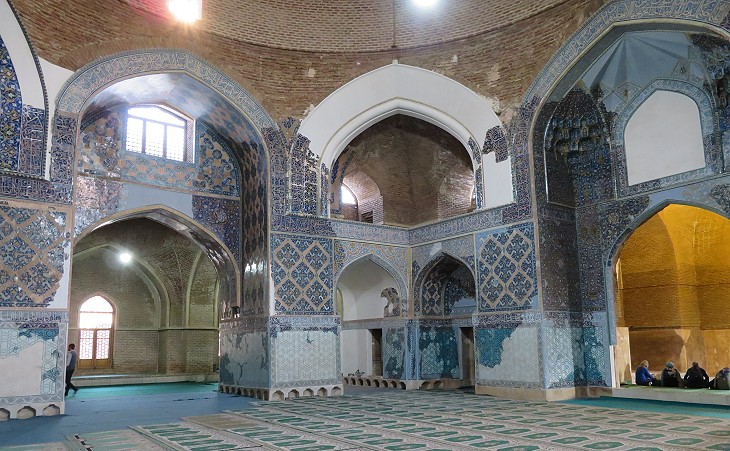 Entring at the Door of the Mosquee, you come into a spacious Duomo, thirty six Paces in Diameter, rais'd upon twelve Pillars within, and supported by sixteen without which Pillars are very high, and six Foot square. Tavernier
The building complex served multiple functions, but only the mosque and the mausoleum are still standing. The vanished buildings and structures included a Sufi lodge, an underground canal (qanat) and a garden, as well as perhaps a medrese and bathhouses. Next to the Blue Mosque was a bazaar which probably provided a revenue for its maintenance. The building served as a mosque between 1501 and 1555, when Tabriz was the capital of the Safavid dynasty. Ottoman troops looted the Blue Mosque in 1514 when Sultan Selim conquered the city. Strong earthquakes damaged it and already in the XVIIth century it was completely destroyed and abandoned. In the XXth century it was restored by rebuilding its domes and missing walls. 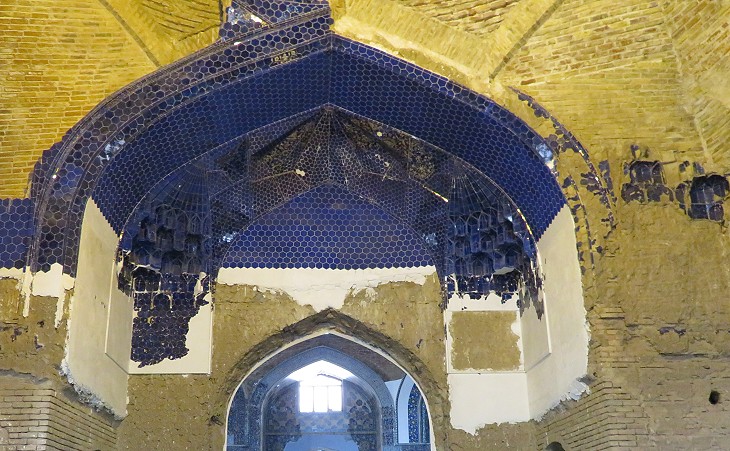 Interior of the mausoleum

From this Duomo you pass to another lesser, but more beautiful in its kind. Tavernier
All tombs have disappeared and there are merely traces of three graves in the mausoleum's crypt. A few details from the mausoleum's interior, such as alabaster pieces from the wall panels and the main prayer niche reveal that the mausoleum was never completely finished. European travellers noted that hexagonal blue and gilded tiles covered the mausoleum's walls and dome, but today only a few of them are still on site within the mausoleum. Their cobalt blue colour instead of the traditional turquoise is very unusual.

On the South-side of the Mosque there are two white transparent Stones, which when the Sun shines upon them look red: And sometimes after the Sun is set, you may read at those Stones by the reflexion of the Sun-beams. Tavernier
Not far from the City in the neighbouring Parts, are to be seen great Quarries of white Marble, of which there is a sort that is transparent. The People of the Country affirm it to be the water of a Mineral Fountain, congeal'd and hardne'd by degrees.
The Travels of Sir John Chardin into Persia and the East Indies - 1686
The dado of the apse is composed of immense slabs of alabaster, inscribed with verses from the Koran, and larger than any at present mined in Persia. Wilson 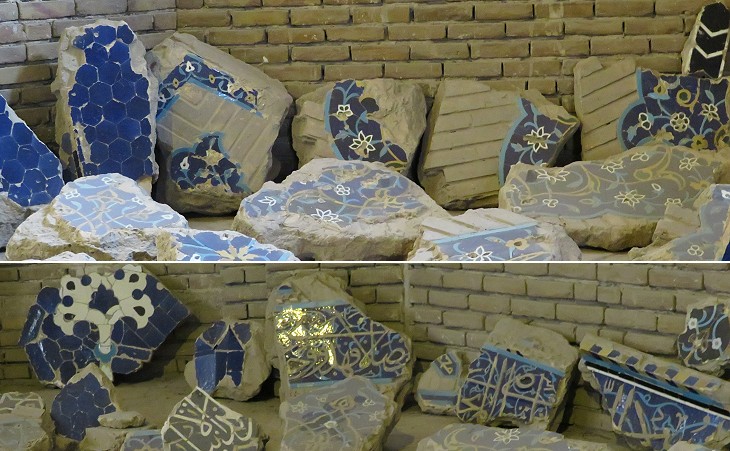 Fragments of the original decoration of the mausoleum

The whole monument was decorated with tile mosaics of a very fine quality and combined with brick for relief effects. They call to mind the decoration of the Friday Mosque of Yazd. Sultan Selim forced many tile makers of Tabriz to relocate to Iznik (Nicaea); some fine Iznik tiles and potteries can be seen at Cinili Kosk (Tiled Pavilion), the Istanbul museum of ceramics.

Return to the town or move to the Azerbaijan Museum.