at Boville
(logo of FAI Spring Weekend and the apse of S. Maria Salome in Veroli)

This page is part of a section which includes Veroli and Abbazia di Casamari. All locations were very near the border with the Kingdom of Naples until 1860. 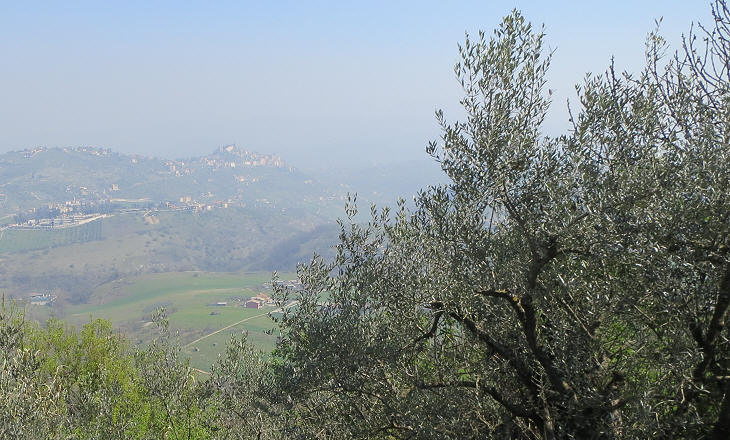 On each side of the road the careful cultivation of the vines and olives betokens the vicinity of some considerable agricultural centre. Presently groups of pilgrims, their long staves in their hands, began to meet us, the women carrying heavy baskets on their heads, while the men, unencumbered, marched on gaily beside them. They were all in holiday garb - the gay national dress of the mountains of Latium. These pilgrims were coming away from far famed Casamari.
Ferdinand Gregorovius - Von den Ufern des Liris - From the Banks of the Liri - 1859 - English translation by Dorothea Roberts.
In 1907 Bauco was renamed Boville on the assumption it stood on the site of Bovillae, an ancient Roman town. Ernica is a reference to the nearby Ernici Mountains which was added to distinguish it from another town by the same name.
The history of Bauco was strictly associated with its commanding position on an isolated hill near the border. Towers of the medieval walls which still surround Boville

In 1204 the inhabitants of Bauco repelled an assault by troops coming from southern Italy, which at the time was a possession of the German Hohenstaufen family. Pope Innocent III granted them a special status in recognition of their loyalty and braveness. Bauco was ruled until 1582 by a governor appointed every nine months by representatives of twelve local families. In January 1861 the medieval walls of Bauco (and the steepness of the hill) were the cause of a setback suffered by Piedmontese troops in one of the last episodes of their conquest of the Kingdom of the Two Sicilies. Some 800 Neapolitan troops gathered at Abbazia di Casamari with the intention of crossing the border and stirring a revolt against the Piedmontese. The latter reacted to the threat by occupying Casamari, but were unable to seize Bauco in which the Neapolitans had sought refuge. Eventually an agreement was signed: the Neapolitans left the town and went to Rome where they were disbanded and the Piedmontese retreated behind the border. 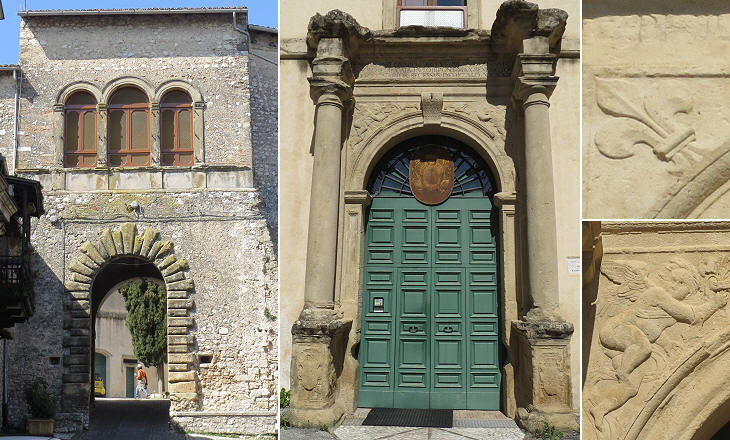 The Popes of the Renaissance are known for having appointed very young cardinals, even in their boyhood. They were members of their family or of rulers of one of the Italian states (e.g. Cardinal Giovanni de' Medici, future Pope Leo X, son of Lorenzo de' Medici, was made cardinal at the age of thirteen). But there were exceptions: Ennio Filonardi was seventy when Pope Paul III created him cardinal in 1536. His origins were rather modest, but he had effectively served many popes as treasurer, governor of towns, ambassador and he was never involved in a plot against the ruling pope. Pope Paul III allowed Filonardi to include the fleur-de-lys, his heraldic symbol, in the decoration of the palace the cardinal built in his hometown, modifying an existing medieval fortress. 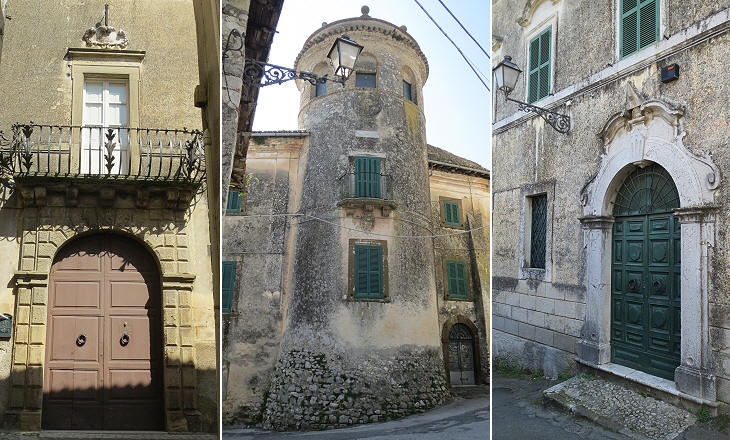 The de Angelis were one of the most prominent families of Bauco. Desiderio de Angelis, supported by the other families, ruled the town from 1564 to 1582 without interruption. Perhaps this continuity of rule displeased Pope Gregory XIII who revoked the status of autonomy granted to Bauco. 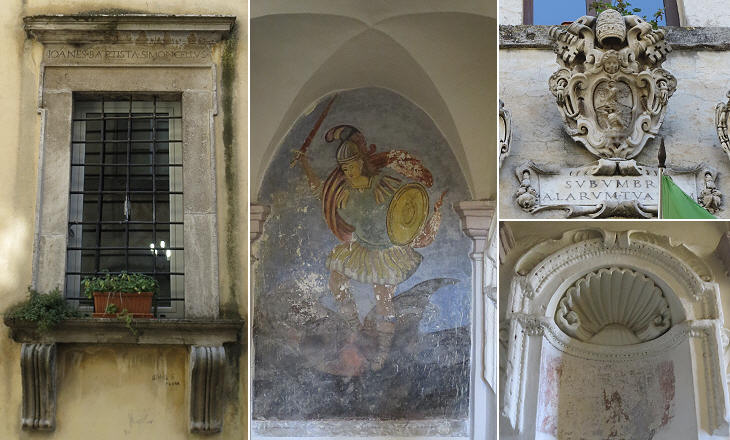 Details of Palazzo Simoncelli (early XVIIth century); the inscription "Sub Umbra Alarum Tuarum" (Under the shadow of thy wings - Psalm 17:8) refers to Pope Paul V, whose coat of arms is placed above

Monsignor Giovanni Battista Simoncelli from Bauco was cubicularius (personal assistant/chamberlain) to Pope Paul V. He was not a cardinal but he had a great influence on the Pope and was highly appreciated for his services. 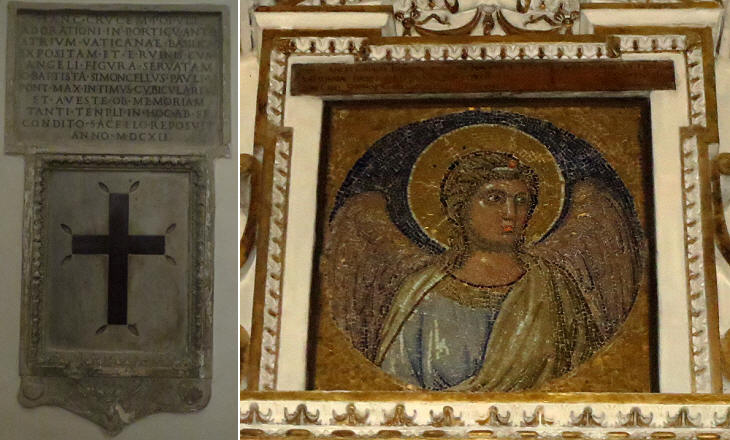 S. Pietro Ispano (a church dedicated to a Spanish warrior who after having fought against the Moors lived as a hermit in a cave near Bauco): porphyry cross (left) and mosaic depicting an angel (right) from S. Pietro Vecchio, Rome

The construction of S. Pietro, Rome was a stop and go affair. After the completion of the dome, promoted by Pope Sixtus V, his successors and in particular Pope Clement VIII were not too keen on going ahead and pulling down the façade of the old basilica.
The decision was made by Pope Paul V. In order to take into consideration the views of some cardinals who opposed it, the Pope moved to the portico of the new façade some elements of the old one such as an inscription dictated by Charlemagne and the central bronze door. In 1612 he agreed to Monsignor Simoncelli moving a porphyry cross and a mosaic to a church (S. Pietro Ispano) of his hometown.
The mosaic is traditionally attributed to Florentine painter Giotto, a main contributor to Italian Renaissance. He rarely made mosaics, which he regarded as an old-fashioned, time-consuming type of art, whereas Filippo Cavallini, his Roman rival, continued the tradition with his works at S. Maria in Trastevere. 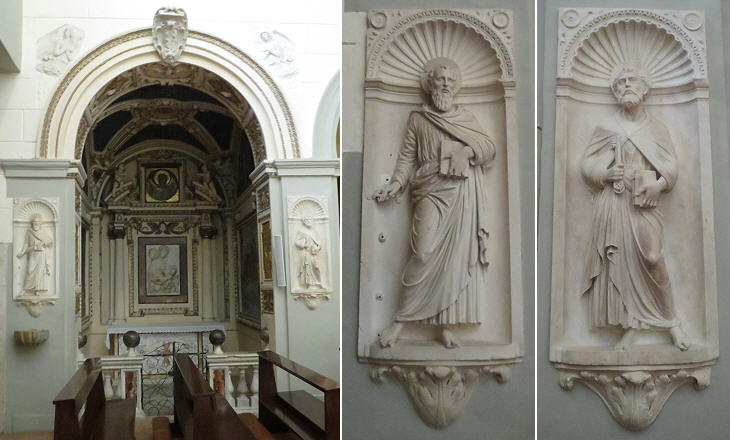 The mosaic was placed in a chapel Mons. Simoncelli built for his family. It was not the only decorative element which came from S. Pietro Vecchio because two statues of saints and two reliefs portraying angels (you can see one of them in the image used as background for this page) were part of funerary monuments by Andrea Bregno, one of the finest sculptors of late XVth century Rome. 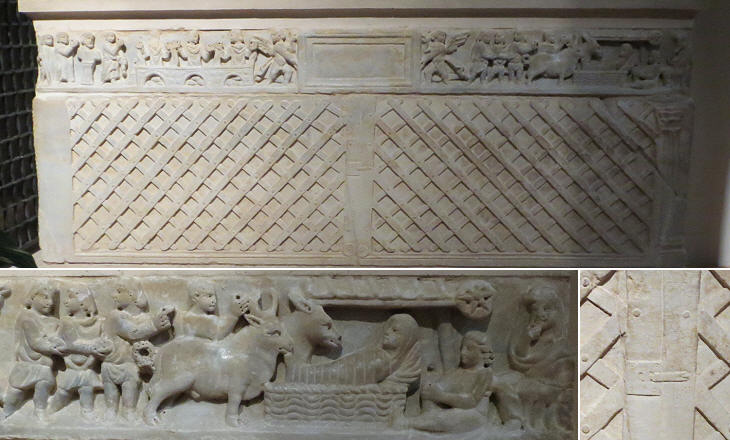 In 1941 a Christian sarcophagus dated IVth century was found in the countryside near Boville. It was moved to S. Pietro Ispano and utilised as an altar. Today it is placed in a way it can be properly admired because it is a very fine work of art with an unusual and well executed decorative pattern depicting a gate. It includes one of the first reliefs portraying the Nativity scene with almost all elements of its traditional iconography (the shepherds, the Magi, the donkey and the ox, the hut and the star).

Bauco declined after the loss of its autonomous rule. S. Michele Arcangelo was rebuilt in the late XVIIIth century by Giuseppe Subleyras (1745-1819), the son of a French painter (Pierre Subleyras) who established himself in Rome and married an Italian miniature painter (Maria Felice Tibaldi). He also worked at Veroli where he redesigned Porta Romana.