You may wish to see the Temples of Paestum first. 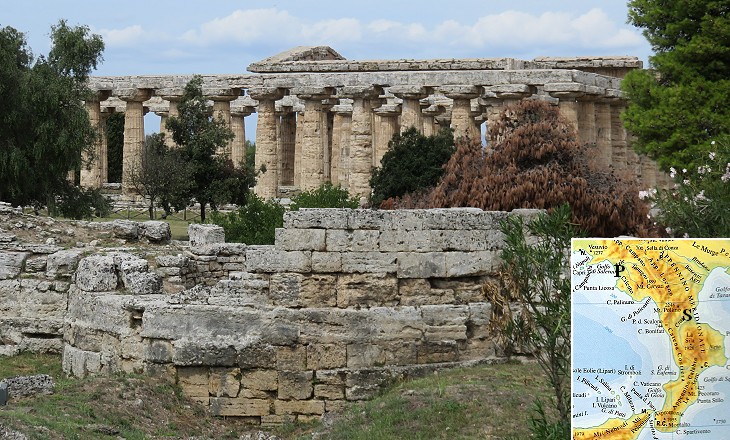 A stretch of the walls and behind them the two southern temples; (inset) map of the region: P/Paestum S/Sybaris

I hired a boat and left Salerno at four in the morning; the pilot being apprehensive of a rough sea kept constantly within a cable's length of the shore, which is very low; at ten he landed me at the tower of Pesto, thirty miles distant from Salerno. After walking near a quarter of a mile over a sandy down, I arrived at the west gate of the ancient city of Paestum, a colony of Dorian Greeks, restored and augmented by the Sybarites. Its oldest name was Siftilis, which was afterwards changed to Possidonia; the name of Paestum seems to date no higher than the time of its becoming subject to the Romans.
Henry Swinburne - Travels in the Two Sicilies. 1777-1780
Paestum was founded in the early VIth century BC by settlers from Sybaris, a rich Greek colony on the Ionian side of Calabria, the "toe" of the Italian peninsula. The new town was named after Poseidon (Neptune) and Paestum is believed to be a Latin corruption of the original name. In ca 400 the town was conquered by the Lucani, who lived on the inland mountains and who profited from the frequent wars among the maritime Greek colonies to expand their territories.
The walls we see today are those built by the Lucani which were in part modified when Paestum fell under the hegemony of Rome. Their southern section most likely stands on the fortifications built by the Greeks to protect the southern temples in the oldest part of the town. 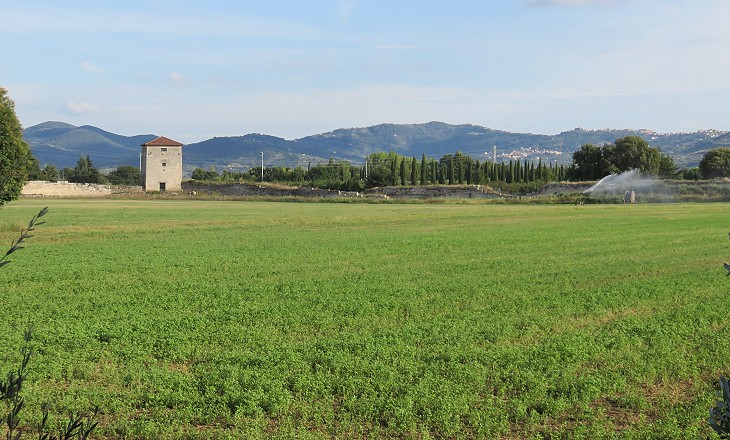 Farmland inside the walls

The town wall is almost entire, and incloses an area about three miles in circumference; in many places it is nearly of the original height, and built with oblong stones dug out of the adjacent fields. Swinburne
The area was reclaimed in the 1920s and eventually archaeologists were able to identify and unearth the whole lower part of the walls. Their length is ca 3 miles and the area they seal off is very large. Based on the size of some monuments (e.g. the amphitheatre) it does not appear that Paestum had a large population, at least during the Roman rule. Farmland inside the walls; (lower left corner) sketch of the walls and gates and location of the archaeological area (in pink)

The stones are a real travertino, formed by a sediment of sulphureous water, of which a strong stream washes the foot of the walls; it comes from the mountains, and spreading itself over the flat, forms pools, where the buffalos are continually wallowing in summer up to their noses. Swinburne
The walls have roughly the shape of a pentagon with a vertex pointed towards the sea/the west. The archaeological area is a rectangle having north-south long sides which extend from the northern to the southern walls. It covers maybe one fifth of the enclosure, the other four fifths are farmed. 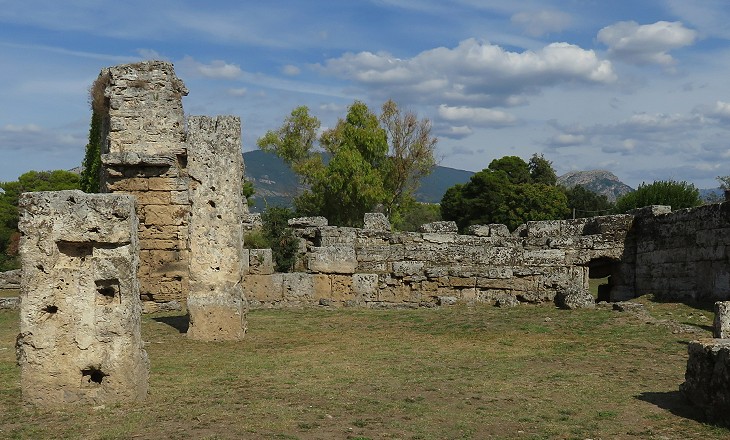 The gates are placed in the center of each side of the quadrangle, and a great street may yet be traced in a line from the north to the south gate; on its eastern side stand the remains of the principal civil and religious edifices. Swinburne
The walls had four gates roughly placed at the four cardinal directions. In 1829 a road (Strada Regia delle Calabrie) was opened across Paestum to facilitate communication between Naples and Calabria. This led to (most likely inadvertently) pulling down Porta Aurea, the northern gate. The gates were identified in the 1930s and they were given modern names. After having entered Paestum from Porta Giustizia ancient travellers found themselves at the beginning of Via Sacra, a straight street which passed along the western front of the two southern temples and reached the western end of the Forum, in the centre of the town. 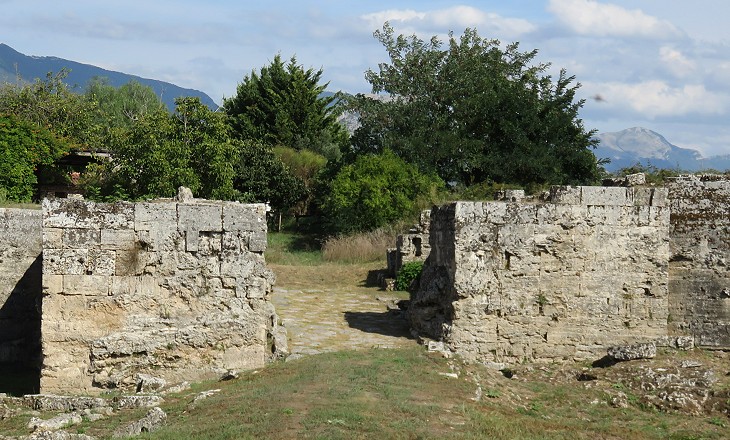 Porta Marina best retains its original design with two towers protecting the access to a square courtyard which was closed by a second gate. The area behind the gate is a private property and one can notice that it stands on higher ground. For many centuries the coastal plain where Paestum is located was intermittently flooded by the River Sele and its tributaries. A thick calcareous layer covered parts of the ancient town. 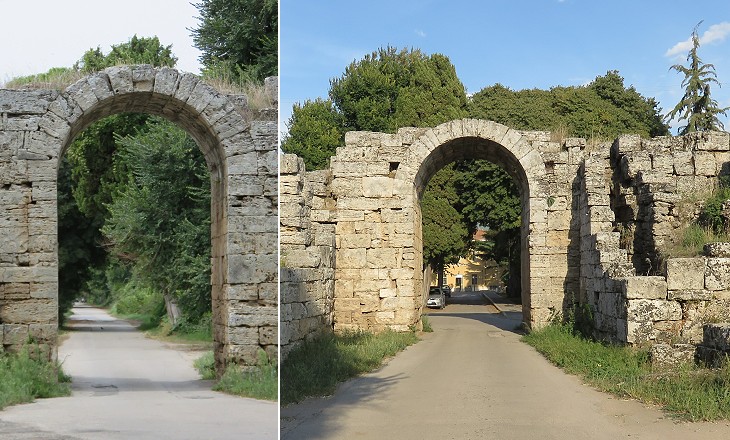 The Lucani usually sided with the Samnites against the Romans in a long series of wars which ended in 290 BC with the recognition of Roman supremacy over the Italian peninsula. Paestum had to accept the status of colonia latina. It retained the right to mint its coins and some form of self-government, but it had to provide Rome with troops if requested. Porta Sirena was built in the Ist century BC and it replaced an earlier gate. Similar to the other gates it had a courtyard and a second gate. 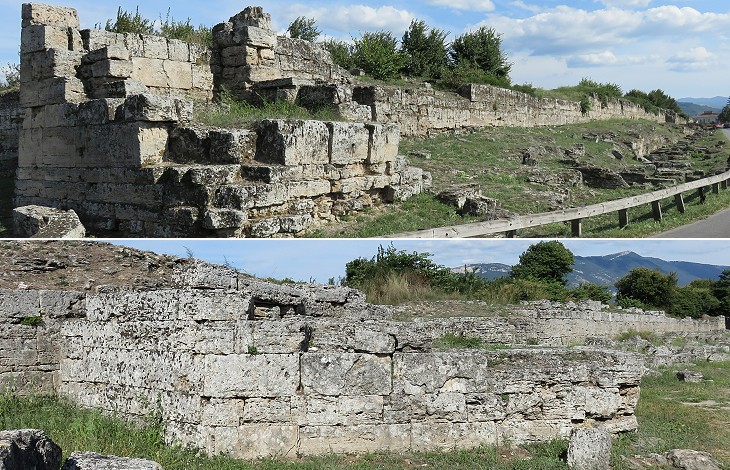 Western walls: (above) tower marking the westernmost point of the walls which in this stretch show evidence of a moat; (below) pentagonal tower projecting from the walls

The western and the northern sides of the walls were protected by a moat which was filled with the water of a small stream. Paestum most likely had a number of harbours, one of which was situated at the mouth of the River Sele, six miles from the town. Although the western gate has been named Porta Marina and is actually the nearest to the sea as the crow flies, it is unlikely it was close to one of the harbours. 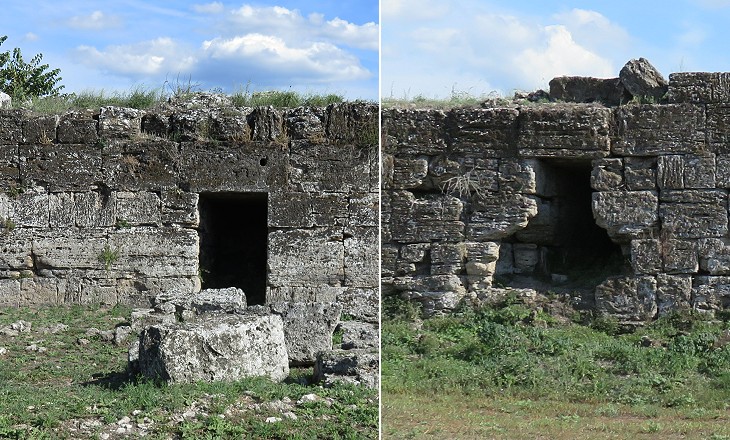 The walls show evidence of some thirty posterns. They are very small and are usually placed near a tower. Per se they did not significantly weaken the defence of the town, but their high number indicates that at one point the inhabitants of Paestum felt that the risk of being attacked by an enemy was very low, because the posterns were provided primarily for the peacetime occupations of the population.
The walls were built with stones cut into rectangular parallelepipeds which were positioned in alternate layers to strengthen the resistance of the wall (see the image used as background for this page). They had an almost smooth vertical surface. 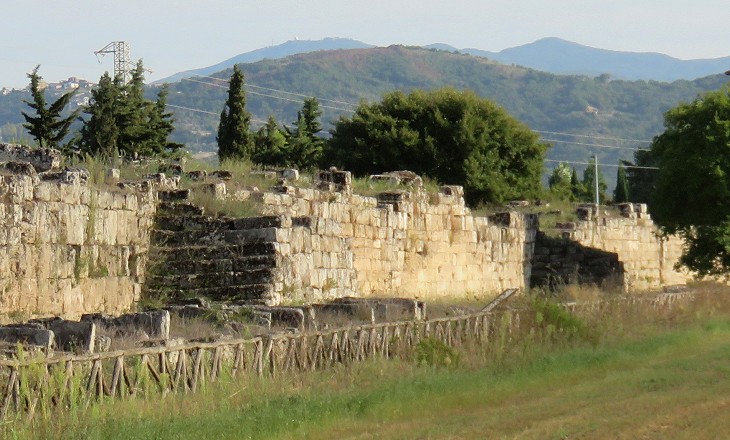 The quantity of sulphureous and stagnated waters must at all times have rendered this plain unwholesome, but when the inroads of barbarous enemies had depopulated the city, and deprived the few remaining inhabitants of the power of maintaining the drains, and continuing their usual course of husbandry, the noxious tendency must have gained such a head as to make this district the seat of pestilence. Swinburne
The walls were of no use to the inhabitants of Paestum to fight the enemy which forced them to abandon their town and seek refuge on the inland mountains. Plasmodium falciparum, the most dangerous of the parasites which cause malaria, spread to the coastal plains of Italy in the Vth/VIth centuries AD. It caused terzana maligna, bouts of fever at intervals of approximately 48 hours which eventually led to death (terzana means every three days).

Move to:
The Temples
Other Monuments
Houses
The Museum