Italska is the name of a large avenue in a late XIXth century part of Prague. It is not however the only street of Prague named after Italy as another street in the historical quarter of Mala Strana is named Vlasska after the old word Vlach used to indicate foreigners speaking a language of Latin origin. Walch is the old German word with the same meaning and from it we have Walloon (French-speaking population of Belgium), Walachian (region of Romania) and even Welsh. Walnut has the same origin as it means nut of Italy or France. Vcela Vlasska is the Italian bee (Apis mellifica lingustica). Old German maps showed Walchland as the name for the Italian peninsula. The use of Walch or Vlach was abandoned in the XVIIIth century although Walch survives in Sud Tirol as a derogatory term for Italian.

Vlasska starts at the market square (Trziste) of Mala Strana near imposing Schonbornsky Palac built in the XVIIth century and which hosts today the U. S. Embassy. It has one of the very few bilingual street names still existing in Prague. It makes reference to the hospital built by the Italian community in Prague. While Italska is just a street near Belgicka and Anglicka with no connection with Italy apart from the name, Vlasska got this name because the Italians used to live there. 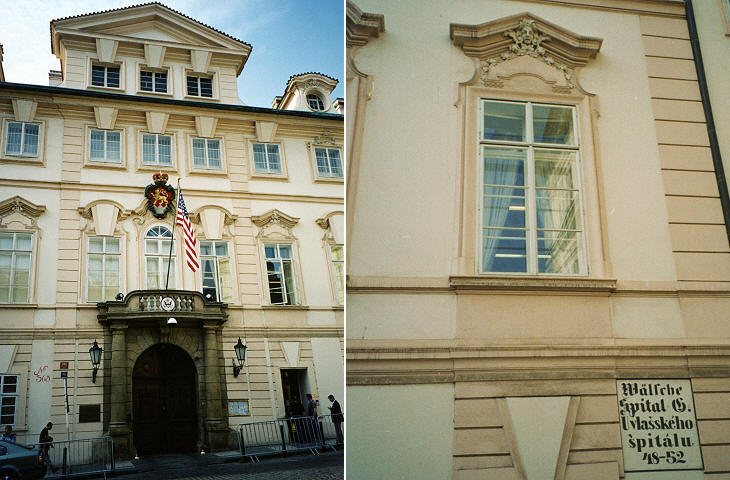 Vlasska is in the little valley between the Hradcany and Petrin hills. While Hradcany was highly populated (it is one of the historical quarters of Prague), Petrin was covered by vineyards and by the gardens of some large palaces, the most important being Lobkovicky Palac, built in 1703-13 by Giovanni Battista Alliprandi from Como. The palace is now the German Embassy. 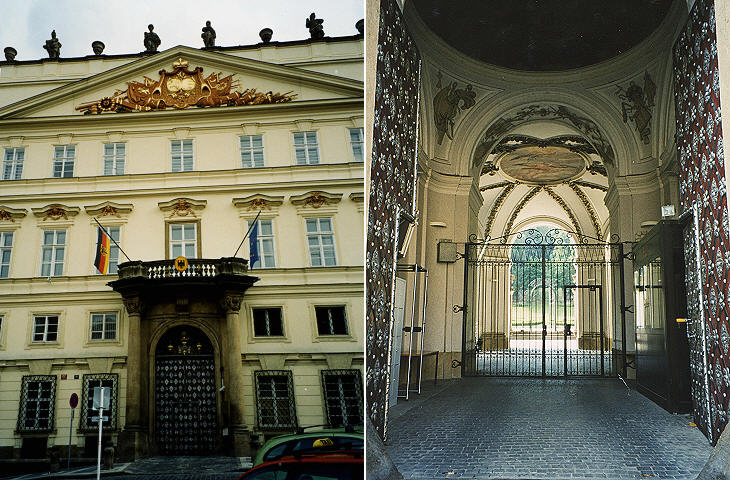 The Italian community was mainly made up of Lombards (including those coming from nearby Italian Switzerland) and they brought to Prague their traditional skills in stone-cutting and plastering. In 1713, with the peace of Utrecht the Duchy of Milan became an Imperial possession and thus Milan and Prague were part of the same multinational empire. 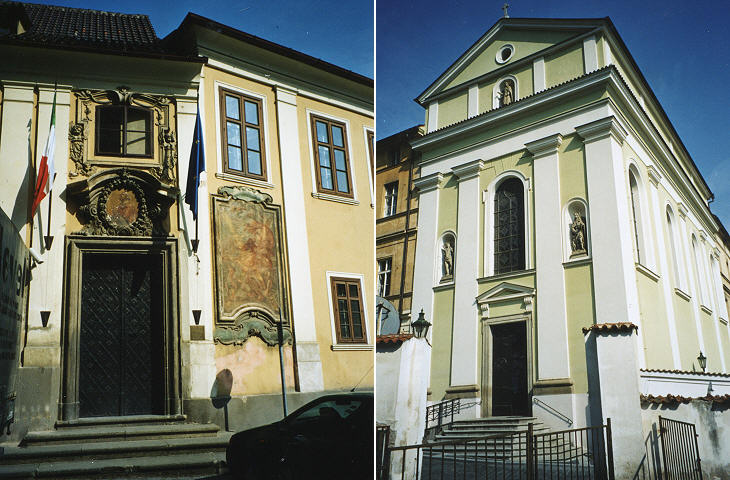 The Italians chose to live in Vlasska because it was very near Nerudova street where the nobles had their palaces and Hradcany which was the center of political and religious life. The community built its own hospital and church and they both still exist today (although the main building of the ancient hospital is now the Italian cultural center). In a little alley off Vlasska a large monastery was dedicated to St Charles Borromeo, whose family was very prominent in the Duchy of Milan. The family motto Humilitas is still written at its entrance. 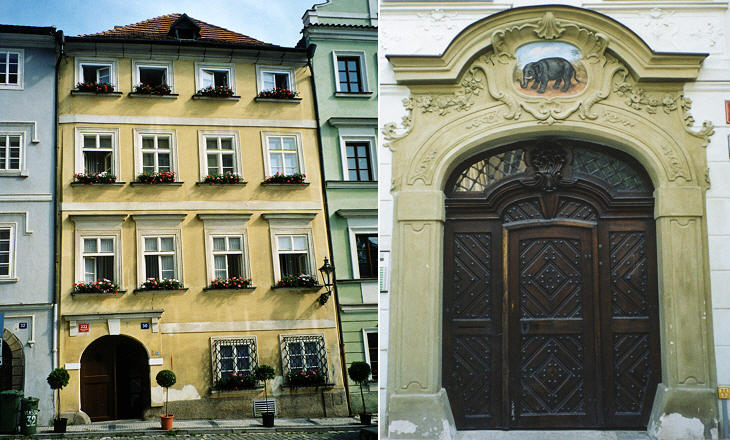 The quality of the buildings in Vlasska is not limited to palaces and large buildings, but it is evident also in more ordinary houses, which were built between the XVIth and XVIIIth century, when the Italian community reached its peak in terms of population and influence. 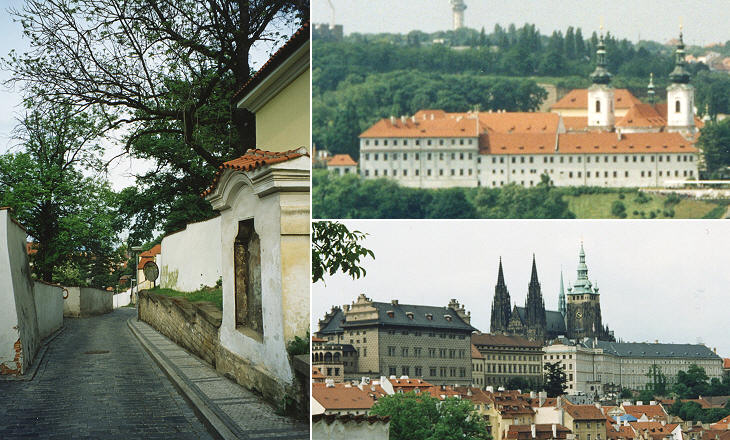 The upper part of Vlasska, Strahov Monastery and Hradcany

The upper part of Vlasska is a narrow lane with a distinct countryside flavour leading to the Strahov Monastery and it offers great views over Hradcany (when the Italians lived in Vlasska the view was slightly different as the two bell towers of the cathedral were added in 1871-1929). 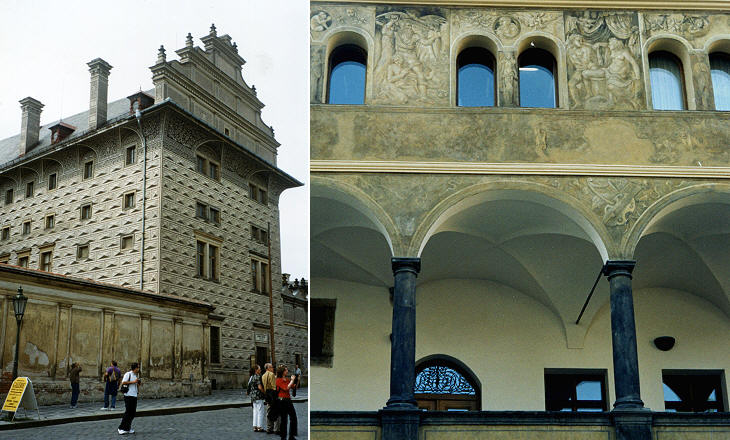 Schwarzenbersky Palac and a loggia in Tyn square (Stare Mesto)

The view over Hradcany shows Schwarzenbersky Palac built in 1563 by Agostino Galli, who lacking the proper stones painted them in order to obtain the bugnato effect of the Florentine palaces. The influence of Italian Renaissance is visible in many parts of Prague. 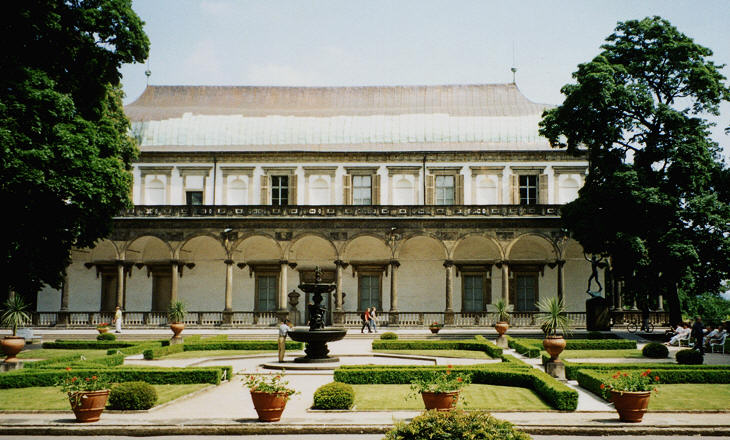 This influence is most likely due to the Archduke (later on Emperor) Ferdinand who, in 1537, commissioned Paolo della Stella, from Milan, the design of a summer residence for his wife Anne. The small palace is still called by the Italian name of Belveder as it allows great views over Prague. 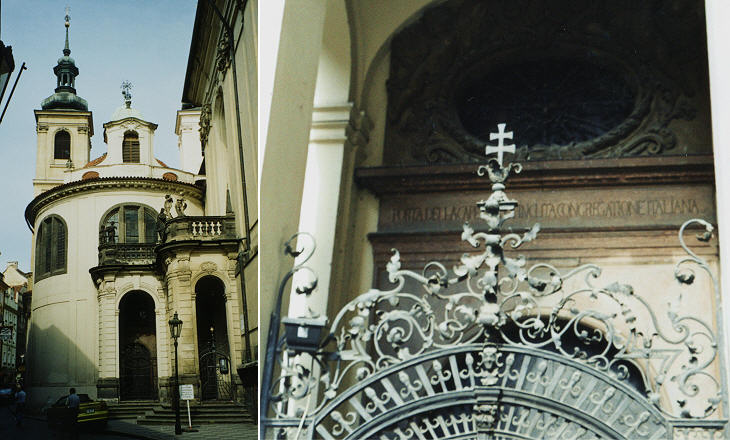 The Italian Chapel in Stare Mesto

The Italian community built at the end of the XVIth century a chapel in the main street (Karlova) of the old town (Stare Mesto). The chapel is still known as Vlasska Kaple. The inscription above the entrance is in Italian and it makes reference to the illustrious Italian community. 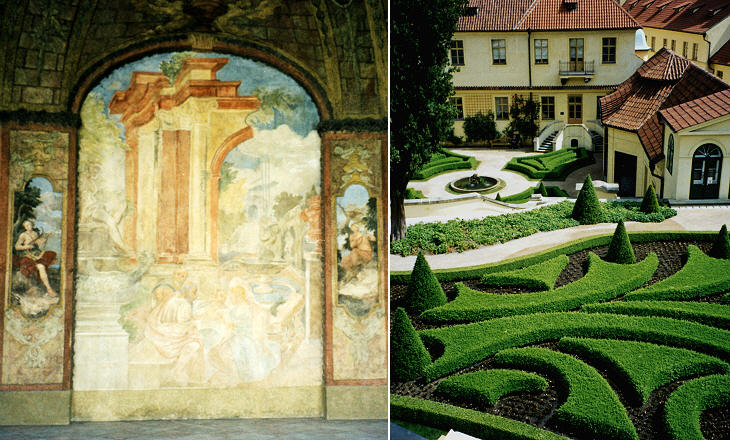 Italian taste is evident also in the design of gardens. Vrtboska garden is in the process of being brought back to its XVIIIth century layout, which shows in the use of plants, statues and grottoes the influence of Italian models (the mermaids in the background of this page are part of its decoration).