Montopoli and Poggio Mirteto
(detail of a mural painting in Montopoli)

Excerpts from Livy - History of Rome - Book 1 (translated by Rev. Canon Roberts):
(Romulus') next care was to secure an addition to the population that the size of the City might not be a source of weakness. It had been the ancient policy of the founders of cities to get together a multitude of people of obscure and low origin and then to spread the fiction that they were the children of the soil. In accordance with this policy, Romulus opened a place of refuge on the spot where, as you go down from the Capitol, you find an enclosed space between two groves. A promiscuous crowd of freemen and slaves, eager for change, fled thither from the neighbouring states.
... the Roman State had now become so strong that it was a match for any of its neighbours in war, but its greatness threatened to last for only one generation, since through the absence of women there was no hope of offspring, and there was no right of intermarriage with their neighbours. Acting on the advice of the senate, Romulus sent envoys amongst the surrounding nations to ask for alliance and the right of intermarriage on behalf of his new community. .... nowhere did the envoys meet with a favourable reception.
... the Roman youth could ill brook such insults, and matters began to look like an appeal to force. To secure a favourable place and time for such an attempt, Romulus, disguising his resentment, made elaborate preparations for the celebration of games in honour of "Equestrian Neptune", which he called "the Consualia". He ordered public notice of the spectacle to be given amongst the adjoining cities, and his people supported him in making the celebration as magnificent as their knowledge and resources allowed, so that expectations were raised to the highest pitch. There was a great gathering; people were eager to see the new City, all their nearest neighbours - the people of Caenina, Antemnae, and Crustumerium - were there, and the whole Sabine population came, with their wives and families. They were invited to accept hospitality at the different houses, and after examining the situation of the City, its walls and the large number of dwelling-houses it included, they were astonished at the rapidity with which the Roman State had grown.
When the hour for the games had come, and their eyes and minds were alike riveted on the spectacle before them, the preconcerted signal was given and the Roman youth dashed in all directions to carry off the maidens who were present. The larger part were carried off indiscriminately, but some particularly beautiful girls who had been marked out for the leading patricians were carried to their houses by plebeians told off for the task.
The abduction of the Sabine women eventually led to a strong alliance between the Romans and the Sabines: the second king of Rome, Numa Pompilius, was of Sabine origin. The image used as a background for this page shows a detail of the Abduction of the Sabines by Giambologna in Florence. 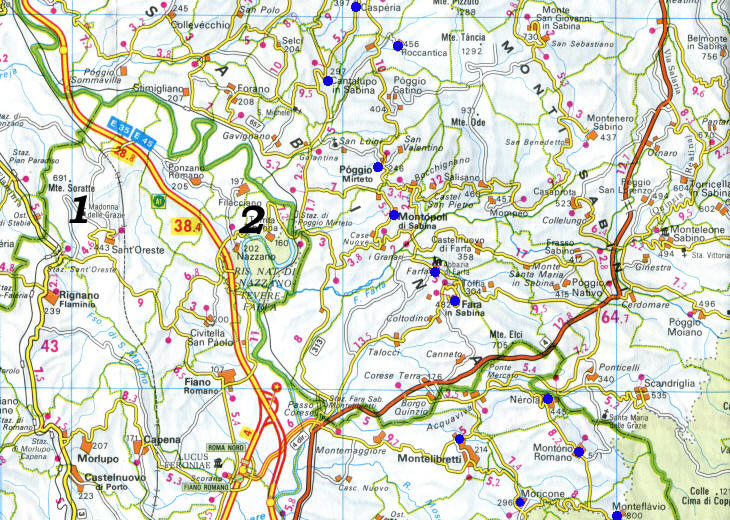 The River Tiber valley north of Rome and Sabina: 1) Monte Soratte; 2) small towns near the Tiber; blue dots: locations in Sabina covered in this section. The red road is Via Salaria

The Sabines lived north of Rome, on the left bank of the River Tiber and that region is today called Sabina after them. They built their towns on the top of hills overlooking the Tiber valley in order to detect the approach of enemies living on the other side of the river: it was not an excessive worry as their neighbours belonged to the most civilized and powerful nation of ancient Italy: the Etruscans.

We were glad to take the so-called diligence to Poggio Mirteto. (..) We at once began to reach a new country, rich in vines and figs and olives, and with lovely views towards the noble serrated outline of Soracte.
Augustus J.C. Hare - Days near Rome - 1875 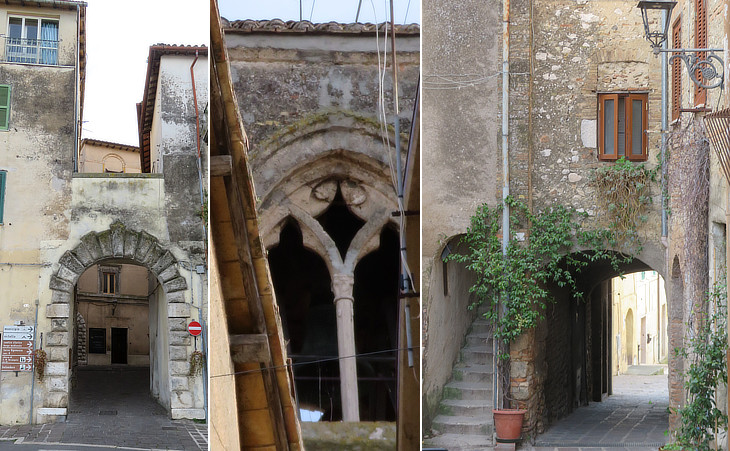 Poseidon was greedy of earthly kingdoms, and once claimed possession of Attica by thrusting his trident into the acropolis at Athens, where a well of sea-water immediately gushed out. ... later Athene came and took possession in a gentle manner, by planting the first olive-tree beside the well. Poseidon challenged her to single combat but Zeus ordered him to submit the dispute to arbitration. Poseidon and Athene appeared before a divine court. Zeus himself expressed no opinion, but while all the other gods supported Poseidon, all the goddesses supported Athene. Thus by a majority of one, the court ruled that Athene had the better right to the land, because she had given it the better gift. (Robert Graves - The Greek Myths).
This episode tells us the relevance of the olive-tree in the Mediterranean civilizations. It did not have the majesty of the oak, nor the elegance of the cypress, but its torn trunk was interpreted as a metaphor of the difficulties of life and its silvery leaves were regarded as a symbol of peace.
We proceeded to Montopoli by an excellent road along the ridges of the swelling hills, which are covered with olives, chestnuts, and peach-trees, with an under-carpet of corn. Hare
Montopoli is surrounded by olive-trees and its oil is highly praised in Rome. The town still shows its medieval fortifications, but the site is so peaceful that they hardly convey a threatening message. 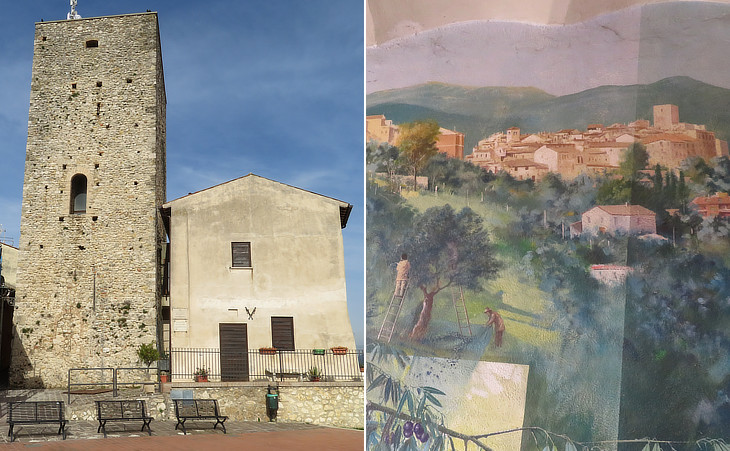 Poggio is an Italian word meaning small hill, but to the word is attached a sense of beauty, either because of the shape of the hill or because of its vegetation. It is appropriately used for Poggio Mirteto which is surrounded by woods that hide its medieval walls and is dominated by its large cathedral. 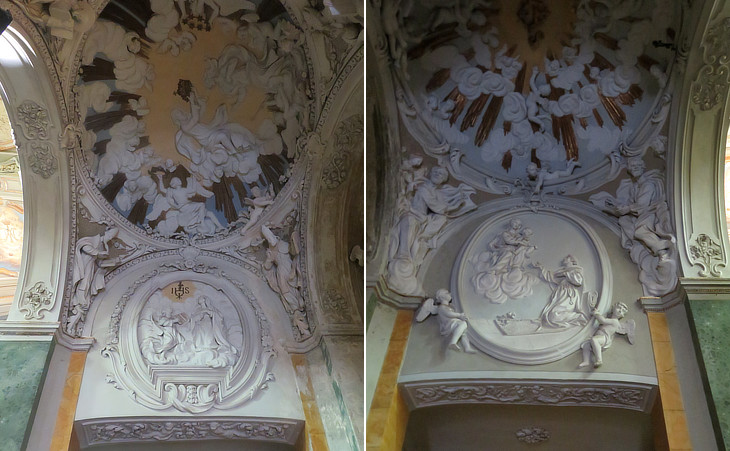 In the XVIIth century Poggio Mirteto saw an increase of its population and the consequent expansion of the town outside the medieval walls. It took more than 80 years (1641-1725) to build the cathedral. It is located in a long square which has at one end the entrance to the old town and at the other the late XVIIIth century church of S. Rocco. 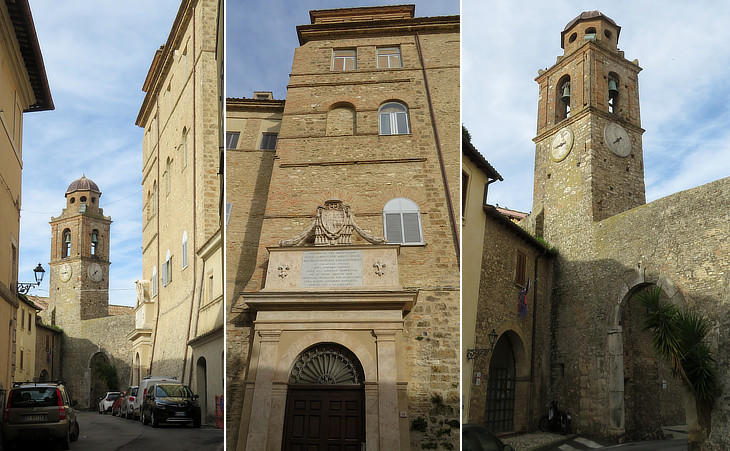 The main gate of Poggio Mirteto is decorated with the heraldic symbol of the Farnese, who had several possessions on the other side of the valley, centred around Nepi and the family palace of Caprarola. Poggio Mirteto however remained nominally a church fiefdom and the imposing palace/fortress at the center of the old town is still named after the bishops who resided there.

Move to:
Cantalupo in Sabina and Casperia
Abbazia di Farfa
Fara and Montorio
Nerola and Monteflavio