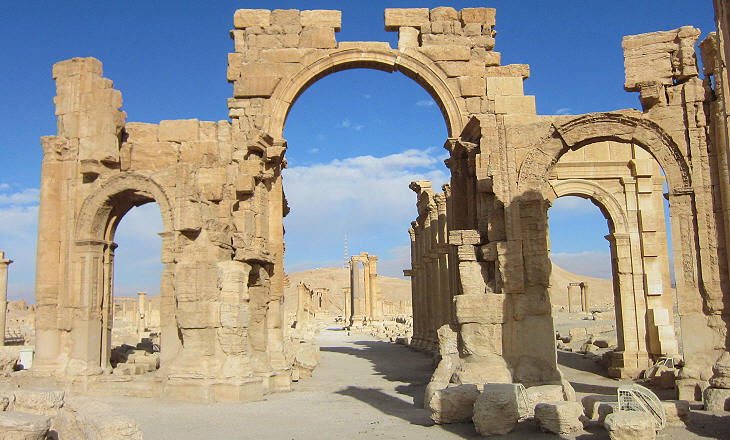 Monumental Arch: view from the east

The monumental arch across the main street of Palmyra became the symbol of the city as soon as the first illustrations of its ruins were published in England in 1753; although since then the work of the archaeologists has revealed the beauty of other imposing monuments, such as the Temple of Bel, the arch remains the most popular site of Palmyra. 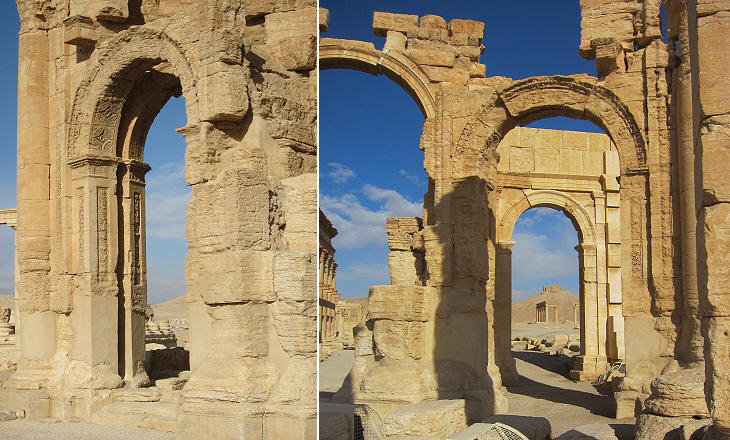 The arch was built at the time of Emperor Septimius Severus, probably to celebrate the Emperor's victories over the Parthians. An unusual aspect of the arch is that it was designed in order to minimize the effect of a 30 degree angle in the long colonnaded street which crossed the town; the lateral arches were duplicated and given a different orientation so that overall the arch seems to be perfectly perpendicular to the street on both sides. The arch has an elaborate decoration, typical of that period, and similar to that which can be seen at Leptis Magna, the hometown of the Emperor. 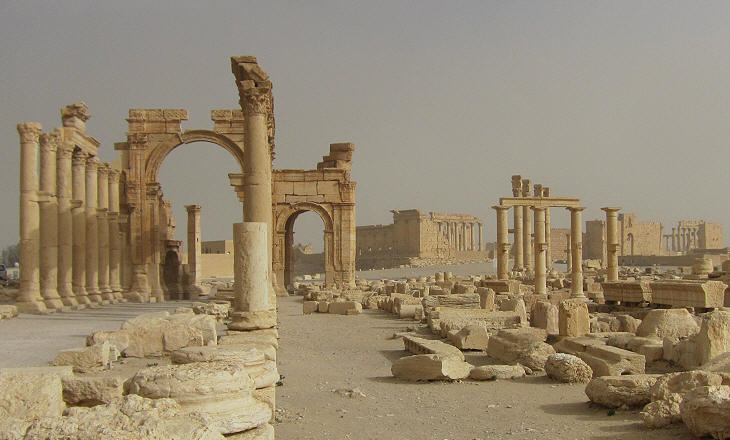 Monumental Arch: view from the west; in the background the Temple of Bel

The main colonnaded street crossed Palmyra slightly sloping downwards from west to east until it reached the Temple of Bel; although it was flanked by shops and public buildings and facilities, its religious significance as the street along which processions reached the temple was paramount (the street did not link the main gates of the city as at Apamea). 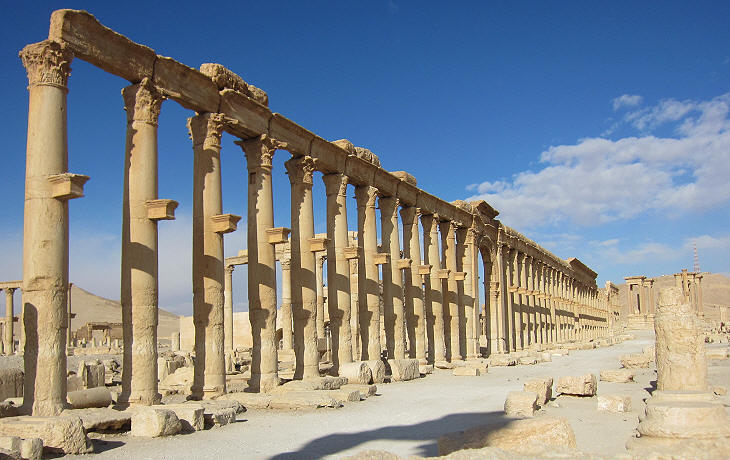 Colonnaded Street: section between the Monumental Arch and the Tetrapylon

As to the honorary inscriptions, they are almost all upon the columns of the long portico where it will appear, that there were statues of the persons named in them, and that the several dates mark the time when such persons received that honour. So that all we can conclude from them, with regard to the buildings is, that the portico is older than the earliest of those dates.
Robert Wood - The Ruins of Palmyra, otherwise Tedmor, in the Desart - 1753
The construction of the main colonnaded street, as well as of many other monuments of Palmyra, was financed by donations from its wealthiest citizens on an individual basis or on a collective one (merchants of a certain trade or origin). In return the donors were allowed to place a small statue of themselves on a pedestal placed at two thirds of the height of the columns. Inscriptions on the pedestal have provided archaeologists with a lot of data on the inhabitants of Palmyra and their life. 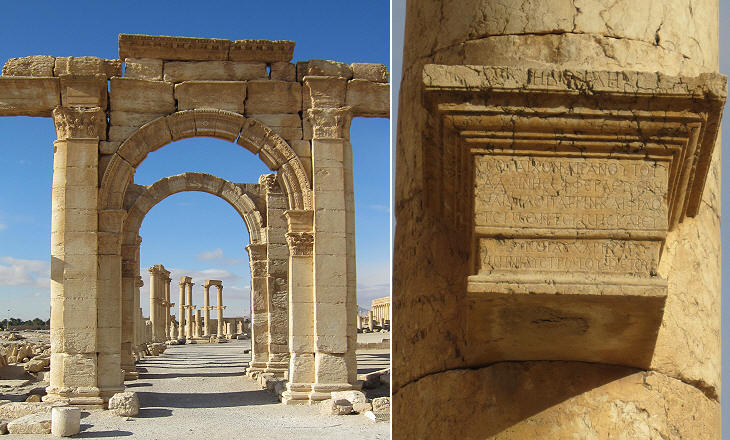 (left) Transversal colonnaded street near the theatre; (right) inscription on a pedestal mounted on a column

Palmyra did not have the rectangular shape of many Roman cities (e.g. Damascus), but it was designed according to an orthogonal grid which was first developed by Hippodamus at Miletus and then copied in other Hellenistic towns; also some of the streets which crossed perpendicularly the main street had a similar decoration based on Corinthian columns which supported small statues; elegant arches decorated the main intersections. 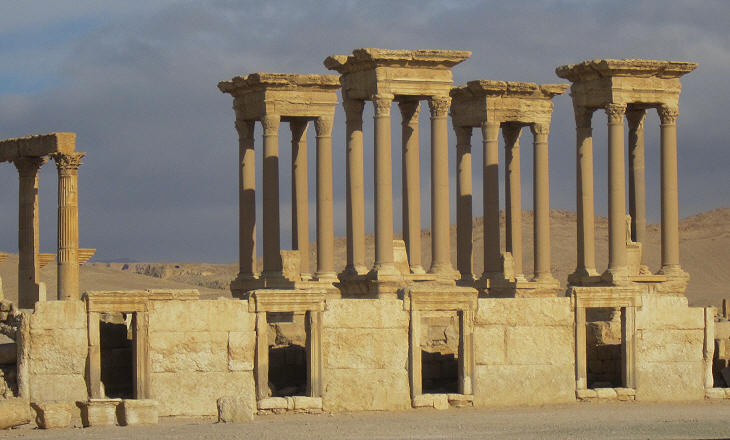 Tetrapylon (seen from the Agora)

Tetrapylon were monuments which the Romans placed at the intersections of key streets (e.g. at Gerasa); they had four (hence tetra) openings and they were associated with the worship of Janus, the Roman god of gates and doorways (see Arco di Giano in Rome); in some locations (e.g. Oea (Tripoli) - Arch of Marcus Aurelius) they took the form of a triumphal arch.
The Tetrapylon of Palmyra (reconstructed with material found in situ) was built in the IInd century and similar to the Monumental Arch it corrected (from a perspective viewpoint) a slight angle of the main colonnaded street; it is one of the rare monuments of Palmyra where granite columns were employed. Aqueduct pipes have been found along the main colonnaded street; they supplied water to fountains and public baths which were located alongside the street. Baths and fountains were an absolute requirement for a city which wanted to have a high status in the Roman Empire. 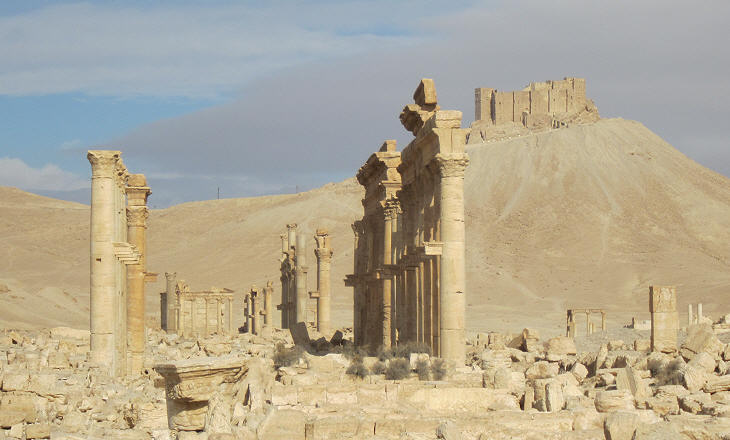 The section of the main colonnaded street between the Tetrapylon and the temple of Bel has received more attention from archaeologists and Syrian authorities than its western section which probably appears today almost as it appeared to the first European travellers. 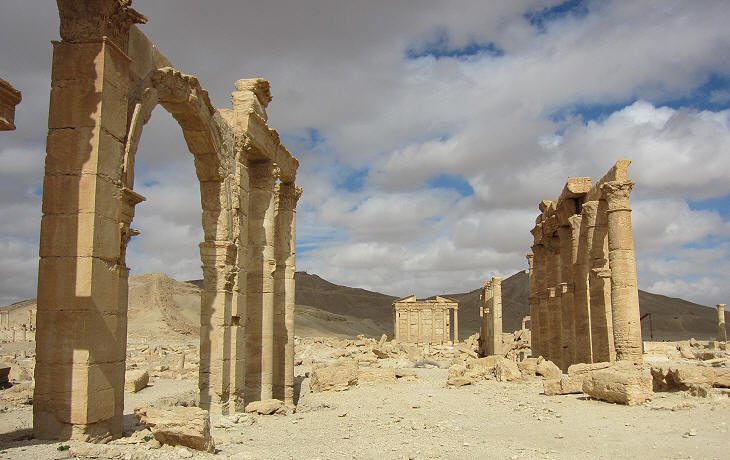 The western end of the main colonnaded street is quite surprisingly marked by a funerary temple of the IIIrd century; although a fine (reconstructed) building with a six column portico, because of its size and nature, this funerary temple does not provide the street with an appropriate end. 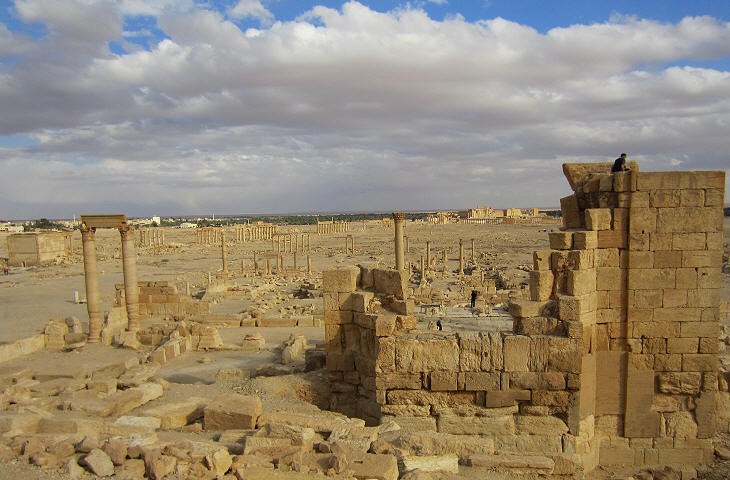 Overall view of the Colonnaded Street from Diocletian's Camp: funerary temple to the far left and Temple of Bel to the far right

Probably processions along the main colonnaded street started from a lateral street to the south of the funerary temple; they moved from a palace and other temples which were located on the highest point of Palmyra; the palace was turned into a garrison camp by Emperor Diocletian.

The image used as background for this page shows a section of the colonnaded street with the Tetrapylon.

Go to:
Introduction
Temple of Bel
Other monuments
Funerary monuments