Hattusa was not only the capital of the Hittite Empire, but also its religious centre: archaeologists have found inscriptions with references to "the Thousand Gods of the Hatti-Land".

Sites of temples in the Upper City

Although temples are mentioned in the Old Kingdom, the actual temple ruins all date from the New Kingdom (after 1400 BC). Excavations have found evidence of several temples in the Upper City near the Sphinx Gate. The foundations of their walls is all that is left; these were made of big limestone blocks. An open courtyard was at the centre of each temple and around it there were several rooms, one of which served for cult purposes (they were identified by finding the base of a statue).

The main temple was located in the Lower City: its entrance was guarded by two stone lions; also in this temple walls and ceilings (which were built with a timber frame filled with mud) have vanished.

Celebrations took place in the temple courtyards. Cuneiform tablets describe such ceremonies in detail; they included some forms of ablutions.
A peculiar green stone is thought to have been a gift from Pharaoh Ramses II. In ca. 1274 the Hittites and the Egyptians fought at Kadesh, south of Antioch. They then signed a peace treaty and exchanged gifts.

Two cult chambers were situated at the north-eastern side of the court. The temple was dedicated to two deities (the Weather God and the Sun Goddess). Coloured stones were used for the foundation walls of these chambers. The temple was surrounded by a vast complex of buildings which included several storerooms where large pottery vessels sunk into the ground were found, similar to the Roman dolia.

With the downfall of the Hittite empire (c. 1190 BCE), the city was destroyed; traces of burning are found in all parts. The site, it seems, remained vacant for a long time. The next settlement was in size and layout much more modest than the Hittite capital. Through pottery and other finds, this settlement is linked to the Phrygians, to whose kingdom the region belonged in the 8th century BC. These post-Hittite settlements saw several rebuildings and lasted into the Hellenistic Age. There are only scattered remains of Roman and early Christian times, after which the place was again uninhabited until the foundation of the village of Bogazköy in the XVIIIth century.
After the fall of the Empire some smaller Hittite states developed in Eastern Turkey (e.g. at Karatepe) and Northern Syria (e.g.at Ain Dara). 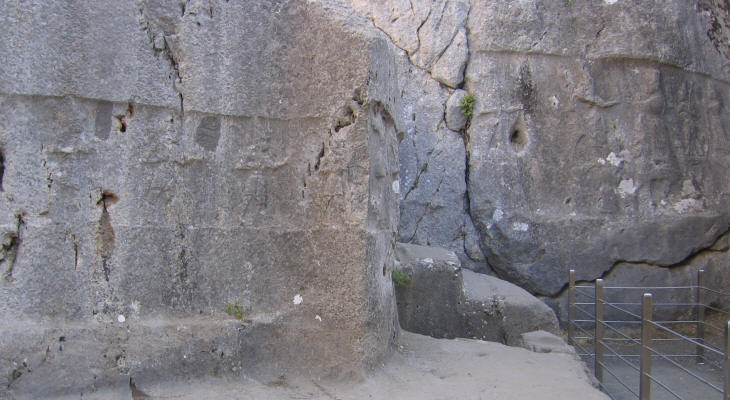 The rock sanctuary of Yazilikaya lies at the foot of a high ridge east of Hattusa. Two recesses in the rock, one to the northeast and the other to the east, form natural open-air galleries which house two cult chambers. Access to them was restricted and they were not in full view as a series of buildings screened them off. The larger chamber was the first to be discovered: in 1834 French traveller Charles Texier visited the site and made the first drawings of the reliefs; the city was thought to be a pre-Roman town and only in 1906 was it identified as Hattusa. 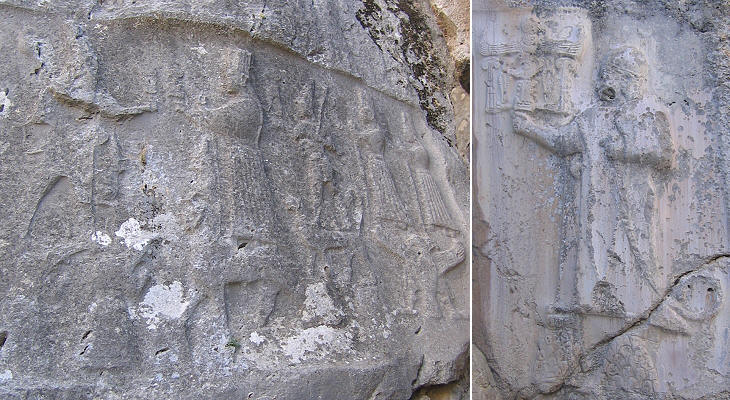 In the large chamber horizontal strips of rock were chiselled to depict processions leading to a central and larger relief which portrayed the meeting between the Weather God and the Sun Goddess (the image used as background for this page shows a modern drawing of the Sun Goddess). They both stand on panthers, legendary creatures resembling large cats (this depiction of a god can be noticed in much later deities, e.g. Jupiter Dolichenus).
A second large relief stands on the opposite wall: it portrays King Tudhaliya IV, in the attitude of paying his respects to the gods. He is thought to be the commissioner of all the reliefs.

The figures do not display any individual characteristics; they all (and in particular the female ones) have elaborate costumes, shoes and headdresses (which call to mind a faravar a Zoroastrian symbol). It is thought that celebrations of Spring were held at Yazilikaya to propitiate a good harvest. The fact that Weather/Storm was a key god of the Hittite pantheon indicates the importance of harvests for the economy. 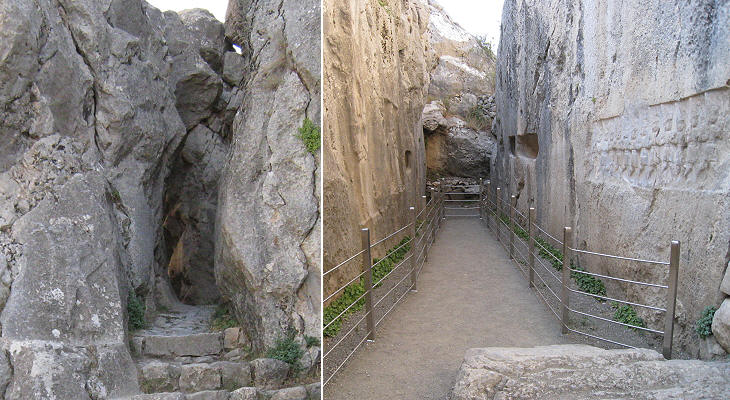 The small cult chamber was partly filled with earth and its relief sculptures are better preserved. The access to the chamber was guarded by two mythological soldiers with wings and the head of a lion: that on the left is clearly visible. The decoration of this room is split into separate panels which do not seem to be related. 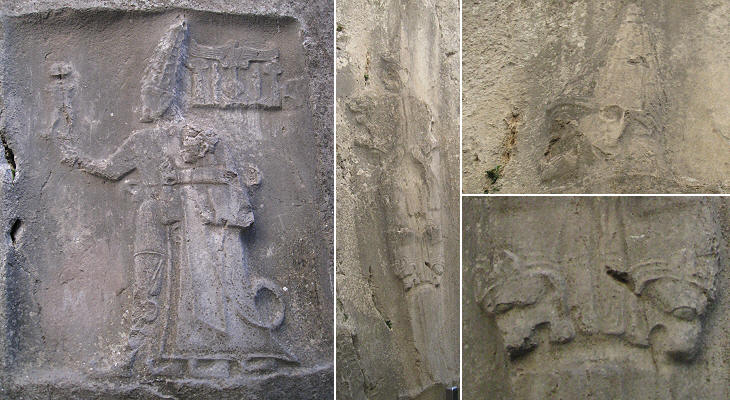 Small chamber: (left) God Sharruma accompanying King Tudhaliya IV; (centre and right) sword made up of the head of god Nergal and of four lion heads

On one wall a large panel shows a deity accompanying/protecting a king: it is probably a funerary relief; a second large panel depicts a most unusual sword; the god portrayed on its handle is the God of the Underworld; this seems to confirm that the chamber was the tomb of King Tudhaliya IV.

Small chamber: deities of the Underworld

A relief portraying a procession of twelve running soldiers was placed at the beginning of the opposite wall: they have been identified as deities, but probably they wore the costumes of the royal guards.

You may wish to see a large neo-Hittite relief at Ivriz.