November 10th. 1810 - We quitted Tebne early in the morning, and (..) arrived, at the end of three hours and a quarter, at Ezra. Here commences the plain of the Haouran, which is interrupted by numerous insulated hills, on the declivities, or at the foot of which, most of the villages of the Haouran are seated. (..) On reaching Ezra I went to the house of the Greek priest of the village (..) Ezra is one of the principal villages of the Haouran; it contains about one hundred and fifty Turkish and Druse families, and about fifty of Greek Christians. (..) It has no spring water, but numerous cisterns. (..) Ezra was once a flourishing city; its ruins are between three and four miles in circumference. The present inhabitants continue to live in the ancient buildings, which, in consequence of the strength and solidity of their walls, are for the greater part in complete preservation.
John Lewis Burckhardt - Journal of an Excursion into the Haouran in the Autumn and Winter of 1810.
Hauran is a region of Syria which is located south of Damascus and which had a period of great prosperity after being annexed to the Roman Empire by Emperor Trajan. A net of canals irrigated its fertile volcanic soil and the region became one of the granaries of the empire; Bosra, the capital of the province, was embellished with a large theatre, baths, colonnaded streets and basilicas, which all were built making use of the black basaltic stone which could be easily quarried because it formed several conical hills. 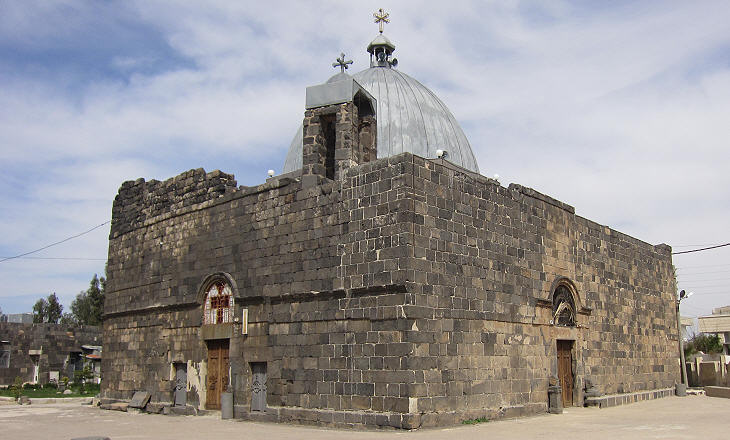 Hauran continued to flourish until the beginning of the VIIth century when first the Sassanids and then the Arabs invaded the region; its economy was badly affected by the collapse of trade and in the following centuries it was almost entirely abandoned. Zorava, a town east of Bosra, today known after the nearby village of Ezra or Izra'a, lost almost all its inhabitants; only a small community of Christians continued to live there and to maintain two churches built in the VIth century. 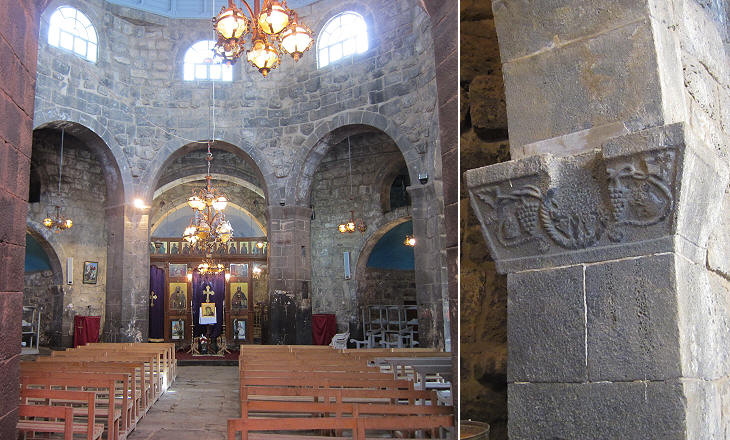 On the south side of the village stands an edifice, dedicated to St. Georgius. (..) It is a square building of about eighty-five feet the side, with a semicircular projection on the E. side; the roof is vaulted, and is supported by eight square columns, which stand in a circle in the centre of the square, and are united to one another by arches. They are about two feet thick, and sixteen high, with a single groove on each side. Between the columns and the nearest part of the wall is a space of twelve feet. The niche on the east side contains the altar. The vaulted roof is of modern construction. Burckhardt
St. George's was built in 515 on the site of a previous temple; a Greek inscription on its western entrance says:The House of Evil was turned into the House of God. Hymns of cherubs replaced sacrifices offered to idols and God settles here in peace, where people used to anger him.
The inscription indicates, that although southern Syria housed some of the first Christian communities, the allegiance to the ancient gods persisted well after the decree issued by Emperor Theodosius in 392 which proclaimed the Christian faith the sole religion of the Roman Empire. 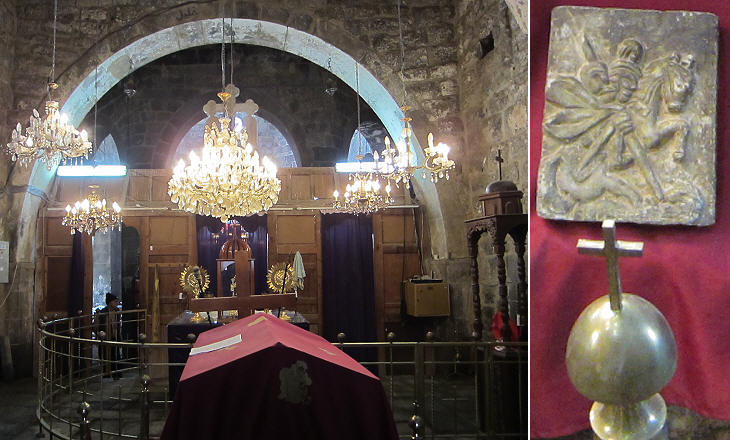 St. George is one of the most popular military saints; he is also regarded as a saint and a martyr by Muslims; according to tradition he was born in Palestine and he became a trusted member of the guard of Emperor Diocletian; he was put to death during the 303 persecution ordered by the Emperor.
The traditional iconography which portrays St. George in the act of killing a dragon most likely derived from the Thracian horseman, a popular pagan funerary relief showing a horseman and a big snake. 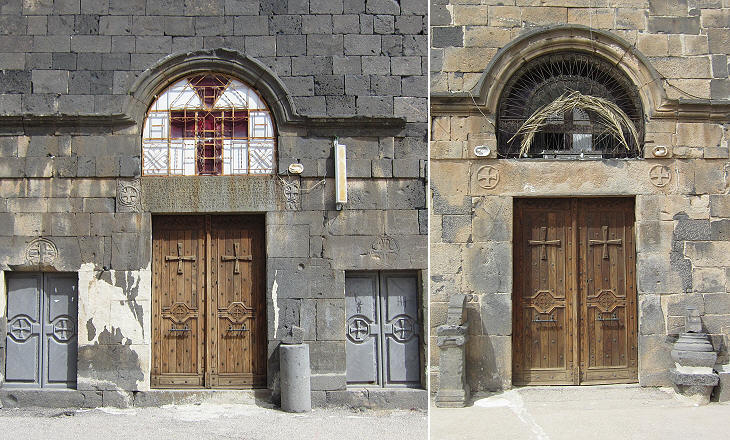 St. George's: (left) western entrance (the image in the background of this page shows one of the crosses on the lintel); (right) southern entrance

St. George's is thought to be the oldest building in Syria which has been continuously a site of Christian (Greek Orthodox) worship. For this reason it was visited in 1890 by Nicholas II, the last Emperor of Russia when he was Crown prince; the construction of the current dome was financed by him. 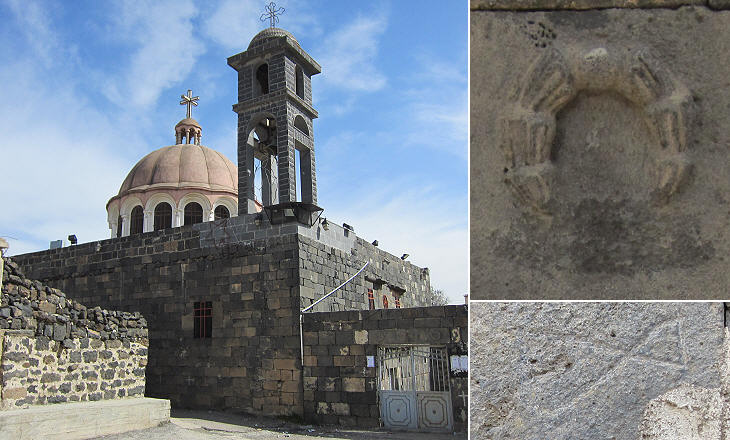 (left) St. Elias'; (right-above) relief of a wreath modified at the top in order to show an egg, a Christian symbol; (right-below) carving representing a fish, another Christian symbol

The church of St. Elias, in which the Greeks celebrate divine service, is a round building, of which the roof is fallen in, and only the outer wall standing. On its S. side is a vestibule supported by three arches, the entrance to which is through a short arched dark passage. Burckhardt
Ezra retains a second church of the VIth century, albeit largely reconstructed; it serves a Greek Catholic community (the Christians of Syria are divided into some ten different churches). St. Elias' retains some very old reliefs and carvings which indicate that it was built making use of previous temples or basilicas. 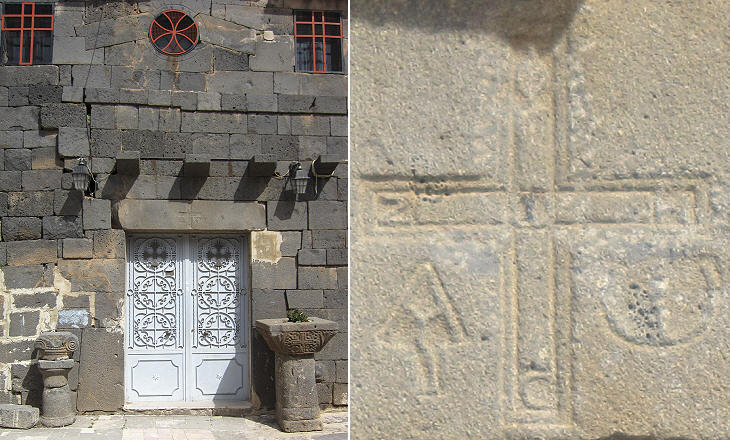 St. Elias': (left) main entrance; (right) a cross between the Greek letters Alpha and Omega, an appellation of Jesus

The Jewish Prophet Elijah who lived in the Kingdom of Israel in the IXth century BC is regarded as a saint by Christians and he is also highly revered by Muslims; the fact that this church and St. George's survived through the centuries may well be due to the fact that they were dedicated to saints whom were accepted by Muslims.

St. Elias': decorated lintel showing a device to reduce the impact of earthquakes

A detail in the decoration of some lintels in Islamic buildings (e.g. Zahiriyya Medrese in Damascus) originates from a device which is clearly visible in this lintel at St. Elias' where a small keystone (which resembles a piece of a puzzle) discharged laterally the impact of earthquakes, thus making the structure of the building more elastic. 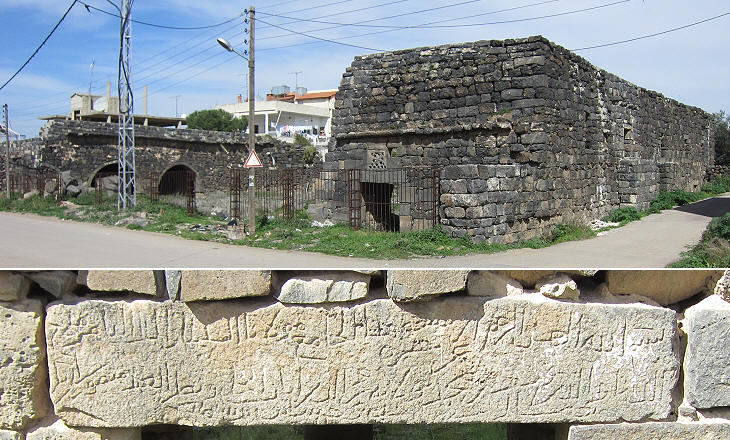 (above) Ruins of an Ayyubid mosque between the two churches; (below) inscription

In the midst of the present inhabited part of the village stand the ruins of another large edifice; it was formerly applied to Christian worship, and subsequently converted into a mosque: but it has long since been abandoned. Burckhardt
When exactly Zorava was abandoned is difficult to ascertain; the presence of a mosque built by the Ayyubids indicates that the town was still populated in the XIIth century; it is possible that the repeated Mongol invasions of Syria and the ensuing wars with the Mamelukes led to the final abandonment of the town; it is known that during these wars the Mamelukes used to burn fields and pasturelands to prevent the advance of the Mongol cavalry. 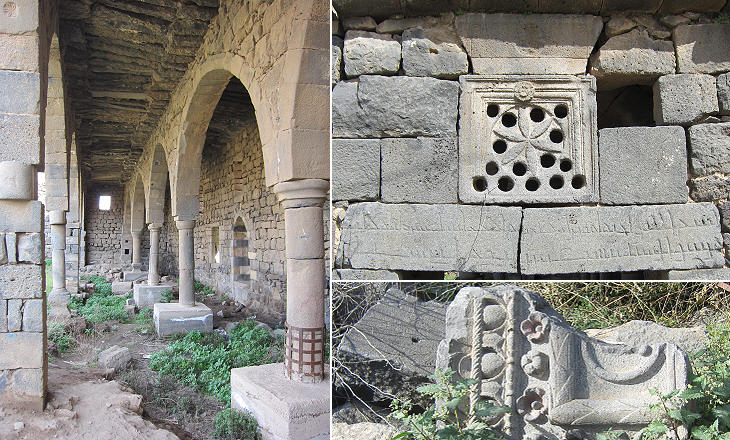 It consists of a quadrangle, with two vaulted colonnades at the northern and southern ends, each consisting of a double row of five columns. In the middle of the area stood a parallel double range of columns of a larger size, forming a colonnade across the middle of the building; the columns are of the Doric order, and about sixteen feet high. Burckhardt
The complex probably included a Koranic school opposite the prayer hall, where one can still see the niche which indicated the direction of Mecca; construction materials, including columns, were taken from ancient buildings.

Houses built on the site of the ancient ones

In the XVIIth century Druzes from Lebanon relocated to Hauran because of rifts among clans of their community; in 1860 a conflict between Maronites and Druzes, which led to the intervention of France in support of the Maronites, led other Druzes to migrate to Hauran, which for this reason is also called Jebel al-Druze (Mountain of the Druzes), although the region is basically a flat tableland.
The newcomers repopulated some of the Roman towns and villages and nested their homes in the ancient buildings; although today the majority of the population has modern accommodation, still some farmers live in the houses of the first migrants. 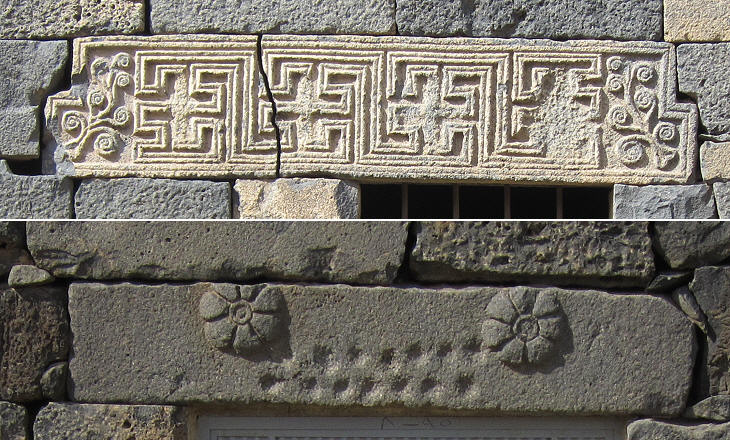 Ancient decorated stones which were re-employed in the construction of new houses; the cavities might have been used for a betting game as at Philippi