The area between Via del Babuino and Via de' Condotti was for centuries known as the Strangers' Quarter due to its many inns and rooms and apartments for short rent. In the XIXth century it became also a favourite location for painters and sculptors who sold to the foreigners picturesque views of ancient Rome and copies of the most famous statues. Today the area is the shopping district of Rome and very few people continue to live there. Despite the traffic limitations, the congestion of the streets and the opportunity to get a fine rent from his little palace, Dottor Fausto de Longis, the heir of a family of Roman painters has elected to continue to live in the house of his ancestors, near Via de' Condotti.

In the entrance hall an inscription lists the members of the family who were painters and who lived in the building: Roberto Bompiani, his son Augusto and his daughter Clelia, Alessandro Battaglia, son of Clelia, and more recently Carlo Ludovico Bompiani and Elena Rondinella de Longis, mother of Dottor Fausto de Longis. Dottor de Longis has carefully restored the building taking care to preserve its old atmosphere. In the courtyard, fragments of ancient columns are on display and the little fountain has yet one of the pulleys which were used to raise buckets of water to the upper floors. The door bells too belong to the past: they were pulled and this movement was transmitted by cords to little bells in the apartments.

In the last years of the Papal State the economy was doing badly and there was little money for erecting new churches or restoring the existing ones. It is therefore a sign of the reputation acquired by Roberto Bompiani the fact that he was commissioned in 1857-1858 a large painting for the restored ceiling of S. Lorenzo in Lucina. The painting is an oil on canvas, rather than a fresco, in line with the XIXth century inclination towards very large canvasses. 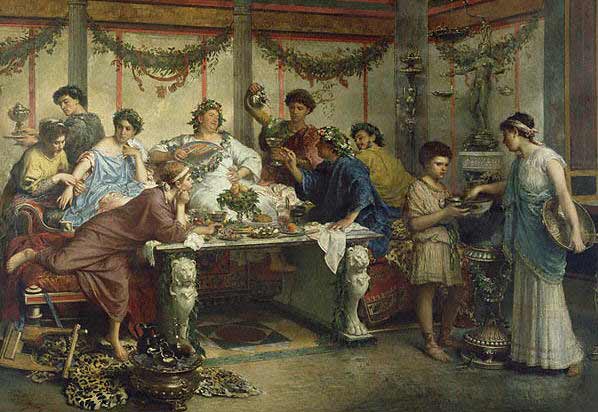 Roberto Bompiani had a zest for a very different kind of subjects, which he could freely reveal after 1870, when Rome became the capital of the Kingdom of Italy. His masterpiece, A Roman Feast had a great success and it influenced many other painters. In a way it was a Hollywood style painting, with a lot of colours and the depiction of a luxurious and sensual society.

Augusto Bompiani (whose self portrait is used as a background image for this page) followed the steps of his father and his paintings show very often scenes of ordinary life in Pompeii, a town near Naples, completely covered by the ashes of the Vesuvius volcano in 79 AD. The excavations of the site, completed in the late XIXth century, had raised a great interest on the life style of its inhabitants, as it was figured out by the many objects and paintings brought to light. 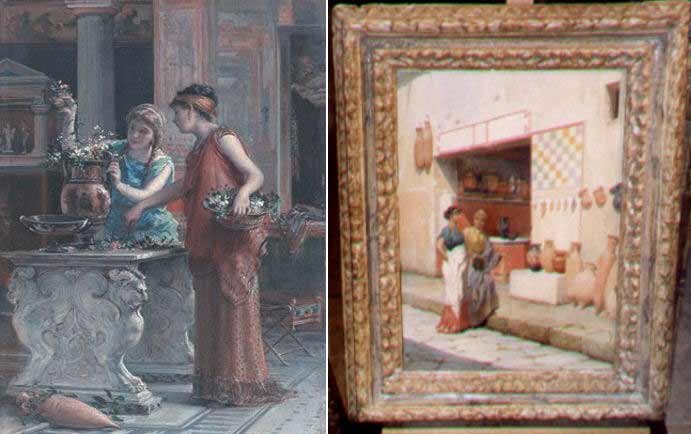 The Bompiani were not the only painters who covered this subject. The painting by Luigi Bazzani was on sale in an art gallery near Piazza di Spagna. 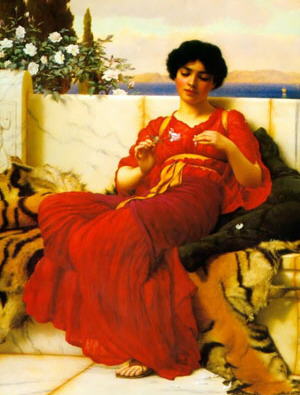 John William Godward was a British painter who was influenced by the works of Roberto and Augusto Bompiani, although he is usually considered a follower of Sir Lawrence Alma-Tadema. He fell in love with one of his models - an Italian girl - and left London for her. He lived in Rome between 1912 and 1919. Godward devoted his whole life to painting girls in classical robes, usually posing decoratively on a marble terrace. By the 1920s most Victorian paintings had become a subject of mockery, and none more so than the neo-classical subjects. Godward was unable to change his style of painting and when he found himself unable to sell his paintings, he committed suicide by putting his head in a gas oven.

John William Godward was not the only painter who fell in love with his model. Alessandro Battaglia, a grand son of Roberto Bompiani, married a model from Anticoli Corrado, a little town in the mountains behind Tivoli, known for the beauty of its inhabitants. The models, both male and female, dressed in their traditional costumes, used to gather on the Spanish Steps where they waited for the artists to offer them work. 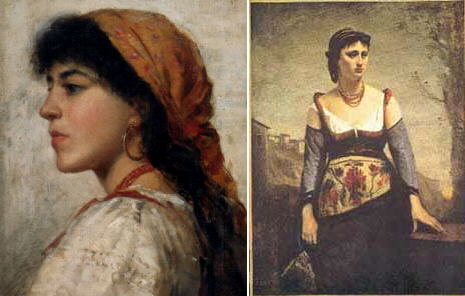 With Alessandro Battaglia, the painters of the family abandoned the depiction of a more or less imaginary past, in favour of the representation of the hardships of contemporary life and the celebration of workers. 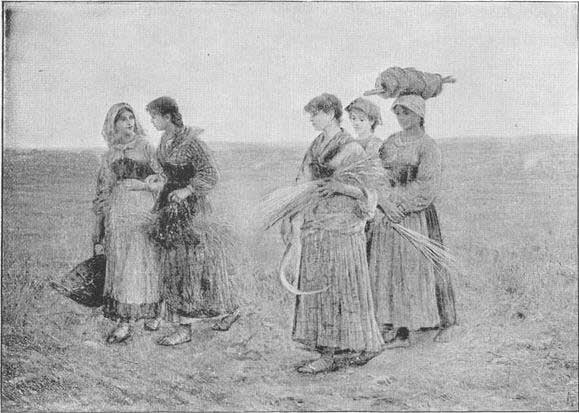 PS: My thanks to Dottor Fausto de Longis for his help and courtesy.