You may wish to read an introduction to this section or a page on medieval Verona first. 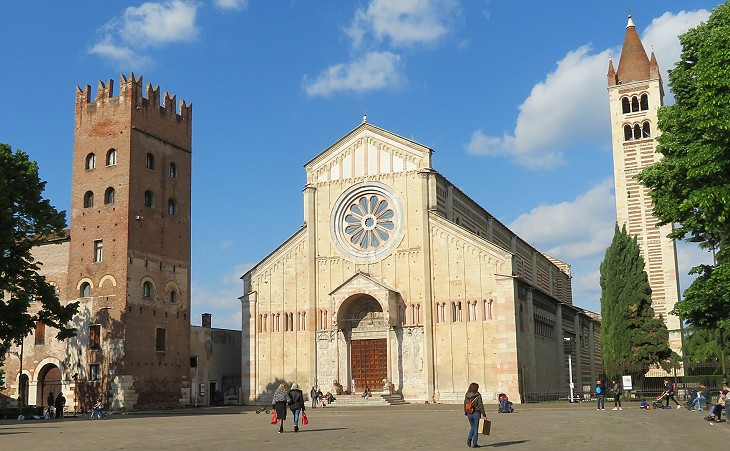 San Zeno (or Zenone) and the tower of its abbey

San Zeno is the most interesting example at Verona of the architecture of the middle ages. It stands at the W. end of the city near the gate leading to Brescia. The first church of any size which was built on the spot where the church of San Zenone now stands was erected in the beginning of the 9th centy. (..) The new church (..) was finished before the year 1178. The plan of the church is that of the Latin Basilica, without transepts. The style of the building is Lombard. The front is of marble. The sides are constructed with alternate layers of marble and brick. (..) Adjoining to the church there was a monastery, and adjoining to the monastery a palace, in which the bishops of Verona resided. (..) We find that the emperors lodged at San Zenone when they visited Verona in the 11th and 12th centuries. Its remains consist of a tower and some portions of a wall.
John Murray - Handbook for Travellers in Northern Italy - 1852
Verona is rich furthermore in beautiful churches several with beautiful names: San Fermo, Santa Anastasia, San Zenone. This last is a structure of high antiquity and of the most impressive loveliness.
Henry James - Italian Hours - 1872 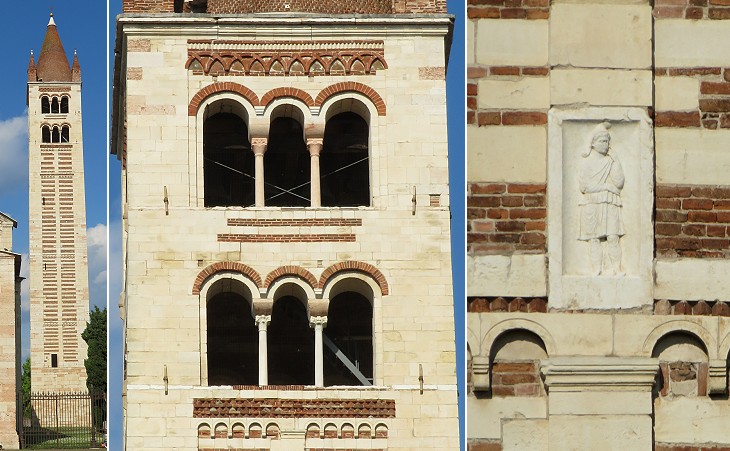 (left) Bell tower; (centre) detail of its decoration which is based on the use of white ashlars and bricks; (right) a Roman funerary relief, probably depicting Attis, which was walled on the bell tower; it is very similar to a relief on a tomb at Aquleia

The campanile, which stands by itself, wholly unconnected with the church, was begun by Abbot Albericus in 1045 (approximately at the same time as those of Aquileia and Pomposa), but was not finished till 1178. Murray
The church and the bell tower stood near a Roman necropolis and some of its tombstones were used as construction material or for decorative purposes. The design of the Romanesque bell tower is typical of Northern Italy (those of Rome have a lighter structure) and it can be seen also at S. Barbara in Venice. The fir cone spire is a later addition. 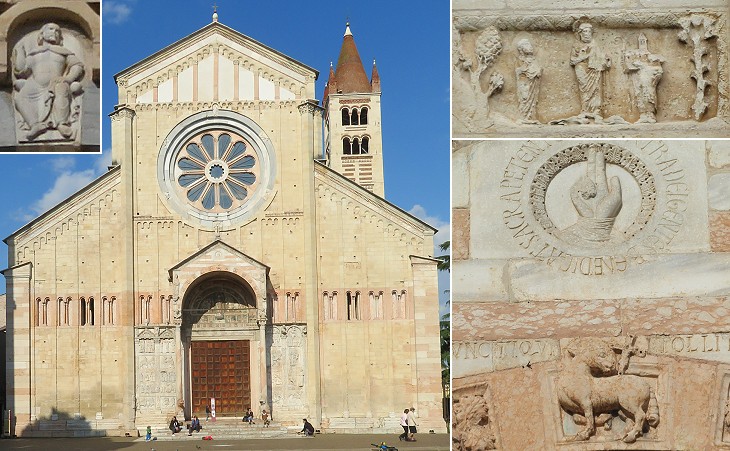 (left) Façade (inset showing a king); (right-above) an isolated relief on the right side of the façade depicting St. Zeno presenting the model of the church to Jesus; (right-below) detail of the projecting porch with a blessing hand surrounded by the inscription "Dextra dei gentes benedicat sacra petentes" (May the sacred right hand of God bless those peoples who seek Him) and the Lamb of God with the inscription "Agnus hic est cuncti qui tollit crimina mundi" (Behold the Lamb of God who takes away all the sins of the world)

The front may be cited as a good example of the early architecture of this part of Italy: the general idea is that of a lofty gable with a lean-to on each side, which, being the natural result of the construction, is, if well proportioned, a pleasing form. (..) The principal feature of the front is one of the earliest wheel of fortune windows. (..) Its allegorical meaning is here made sufficiently clear by the King at the top of the wheel, and the prostrate wretch at the bottom, and the verses both within and without, by which Fortune speaks and addresses the beholders. (..) On the external circumference "En ego fortuna moderor mortalibus una / Elevo, depono, bona cunctia, vel mala dono." (Behold, I, Fortune, I alone bestow on mortals, I raise, depose; to all I give good or evil gifts). (..) Immediately above the arch of the porch is a hand with the fore and middle fingers extended, and the two others bent, in the act of the Latin Benediction. Murray 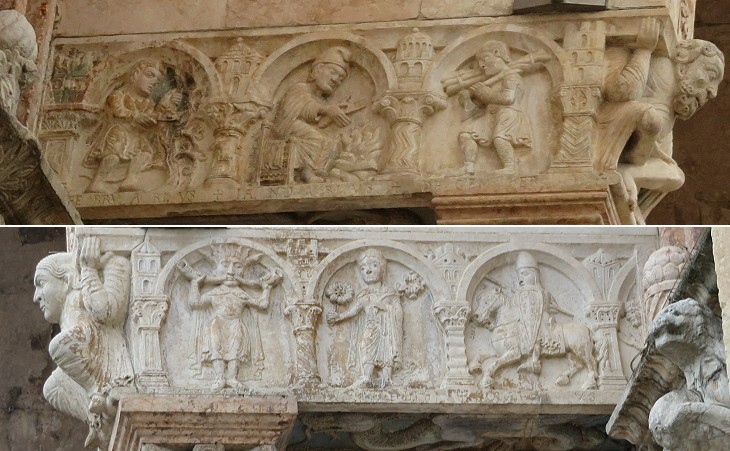 Details of the portal with symbols of the months inside niches resembling those of a Sidamara sarcophagus: (above) February, January and December; (below) May, April and March

The bases and capitals of columns, as well as the architraves and friezes, the archivolts and cornices they supported, were often most sumptuously sculptured. Strange masks and animals often run under the fasciae and string courses. (..) Such we see at Verona in San Zeno. Wherever, indeed, ancient Roman relics of some importance remained, as models for later sculptors to copy, and where there existed a demand for later works in which they might be imitated, the Lombard and Carlovingian, and even later monuments, present in bases and capitals of columns, and in archivolts and cornices, so close an imitation of the later antique style, that it is difficult to know the difference.
Thomas Hope - An Historical Essay on Architecture - 1835
The portal is a very rich specimen of those of Italian churches in the 12th century. Whatever the sculpture of that age and country was able to effect is profusely expended upon its decoration, both in marble and bronze. If in these decorations some ludicrous images are retained, the greater part of them attempt to imitate the more correct models of the Roman bas-reliefs. Murray 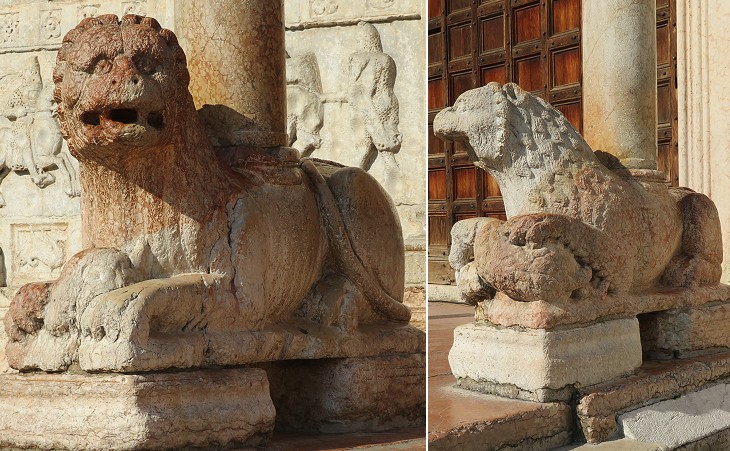 Lions supporting the columns of the portal, similar to what occurs at the Cathedral; you may wish to see also those of the Cathedral of Ancona for which reddish stone from Verona was utilized

In places which required peculiar security against the influence of evil spirits, at the entrance of churches, sanctuaries, and cloisters, around the thrones of bishops, the pulpits of preachers, and the tombs of the dead, were stationed, as sentinels and protectors, terrific and monstrous beings - lions, sphinxes, griffins, chimeras, and others supposed to possess a peculiar power of preventing the approach of these invisible enemies, or paralysing their ill intent; often represented in the very act of destroying some other animal, and on their backs the supporting pillars were fancied to have more strength than on the securest foundations. Hope
The pillars, as usual, rest on the backs of lyons, symbolical of the vigilance and strength of the church. Murray 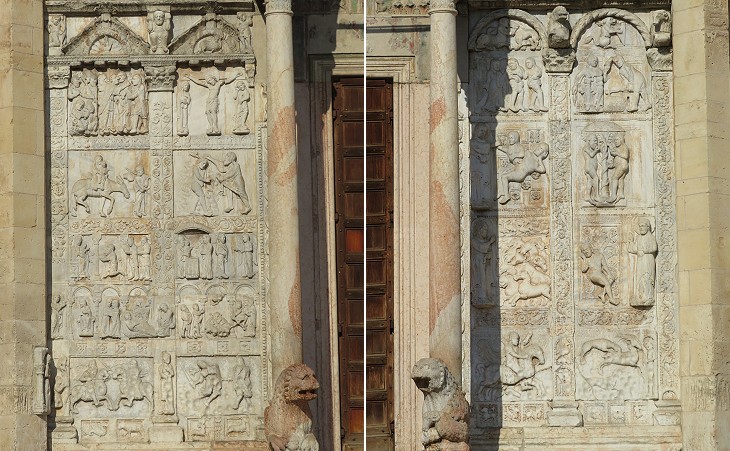 Reliefs at the sides of the portal

On the flank of the portal appear subjects taken from the Old and New Testament, - the history of Adam and Eve on the R hand, the principal events in the life of our Saviour on the other, explained in leonine verses in short epigraphs. (..) All the figures are rudely sculptured; but the arabesques, which enrich the divisions of the different compartments, are beautifully designed, and not ill-executed. Murray
A detail of the reliefs on the left side of the portal is shown in the image used as background for this page. 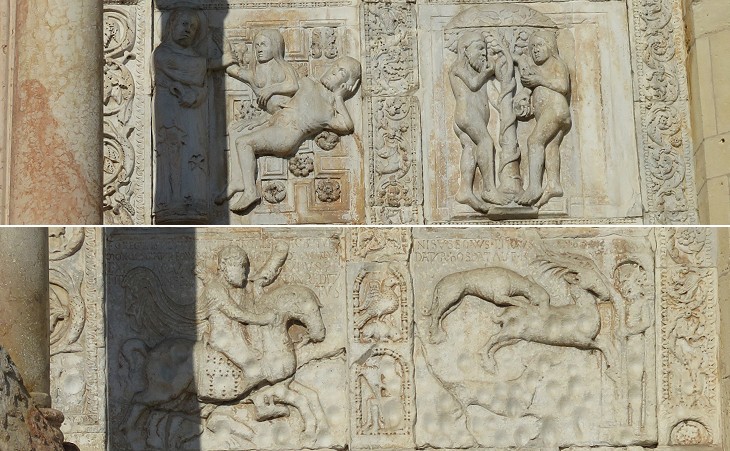 With these are blended, as usual, subjects taken from ordinary life, and illustrating the manners of the times, - knights jousting at each other; and below the first series is a representation of the chase, popularly called the Chase of Theodoric. The feet of the hunter, who is in Roman costume, are placed in stirrups; and this, according to Maffei, is the most ancient piece of sculpture in which they are exhibited. The dogs have seized the stag, and at the extremity is a grinning daemon waiting for the hunter. Some lines underneath designate him as Theodoric, and, according to the vulgar notion, the infernal spirits furnished him with dogs and horses. This arose probably from his being an Arian. Murray
According to an account by St. Gregory the Great Theodoric was dropped by his horse into Mount Etna or into the volcano of Stromboli, to suffer there until the end of days, rather than being laid in state in his mausoleum at Ravenna. 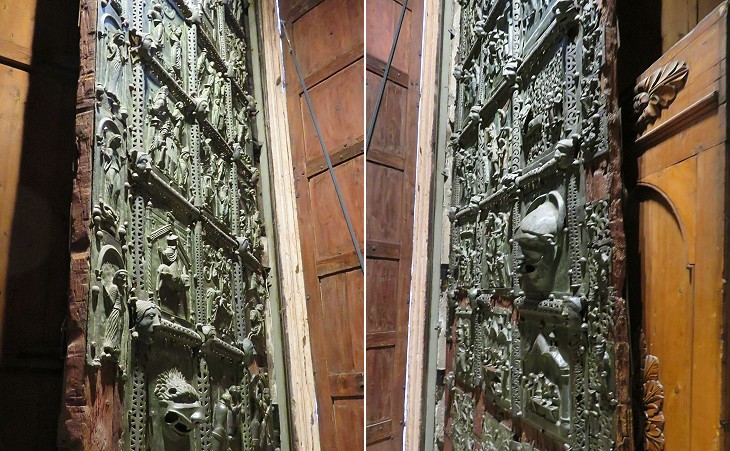 Of the original doors of the more ancient churches but few remain. San Paolo still possesses those wrought, in its infancy, at Constantinople, and rudely engraved. Santa Sabina has others very ancient, and elegantly carved in mosaic compartments; (..) San Zeno, at Verona, boasts its wooden doors, with plates of bronze, wrought in relief, and showing, in the decrepitude of art, a perfect resemblance to its earliest attempts. Hope
The doors are of bronze, enriched with figures in compartments. Murray
Today the doors are protected from the effects of weather and they can be seen (at an angle) only from the interior of the church. 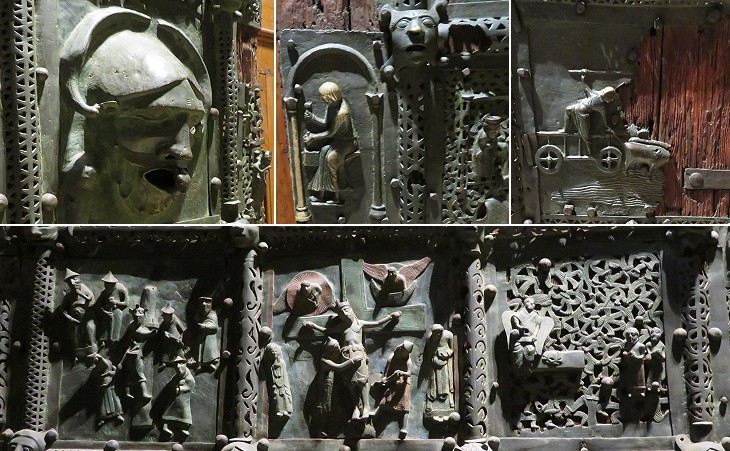 The doors are made up of 48 panels depicting a variety of subjects; they were made by different sculptors and at different periods; some of them belonged to an earlier church. The scenes broadly refer to Creation and Fall on one door and Redemption and Salvation on the other, but there are also images of kings and saints and of a sculptor at work. The reliefs lack depth because the panels are very thin; they were just the decorative facing of a solid wooden door. 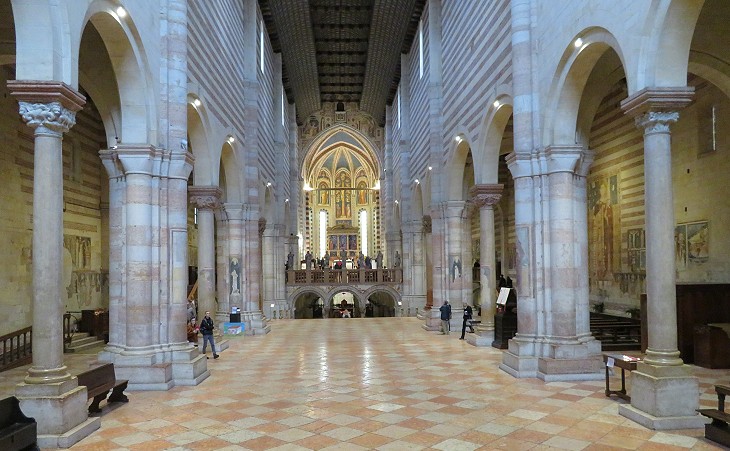 The interior of the church is striking, from the grandeur of its proportions and its elevation. The nave is high, and is divided from the aisles, which are low, by alternate pillars, and piers supporting semicircular arches in pairs. Murray
I shall never forget the impression of majestic chastity that I received from the great nave of the building on my former visit. James

Under the choir there is a spacious crypt, the semicircular vaulted roof of which is supported by 40 pillars, with capitals of various forms. (..) In and about its recesses are dispersed numerous fragments of ancient frescoes. Murray
The nave terminates in a double choir, that is a sub-choir or crypt into which you descend and where you wander among primitive columns whose variously grotesque capitals rise hardly higher than your head, and an upper choral plane reached by broad stairways of the bravest effect. James 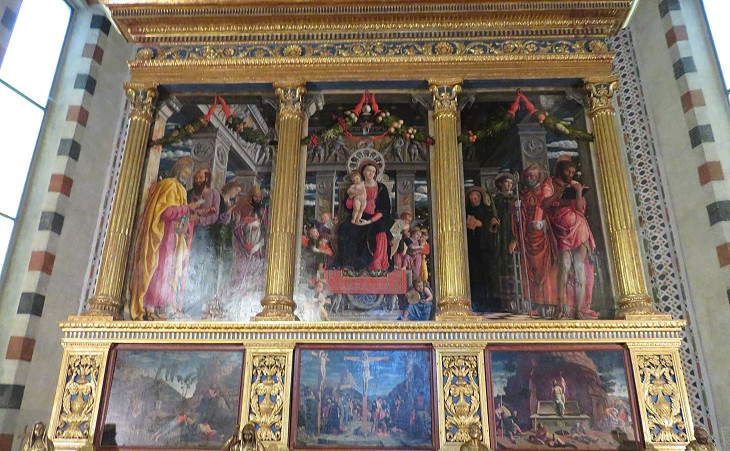 The best painting is by Andrea Mantegna, which went to Paris, and is now over the high altar. It is one of the most important of the artist's easel pictures in Italy, and represents a Madonna enthroned with Angels, and four Saints on each side. Rich architecture, adorned in front with festoons of fruit, surrounds the composition. There are three more compartments, which have not returned from Paris. Murray
The nobly serious character of San Zenone is deepened by its single picture, a masterpiece of the most serious of painters, the severe and exquisite Mantegna. James
The lower compartments are copies of the originals at the Louvre. A similar fate occurred to other Italian works of art. 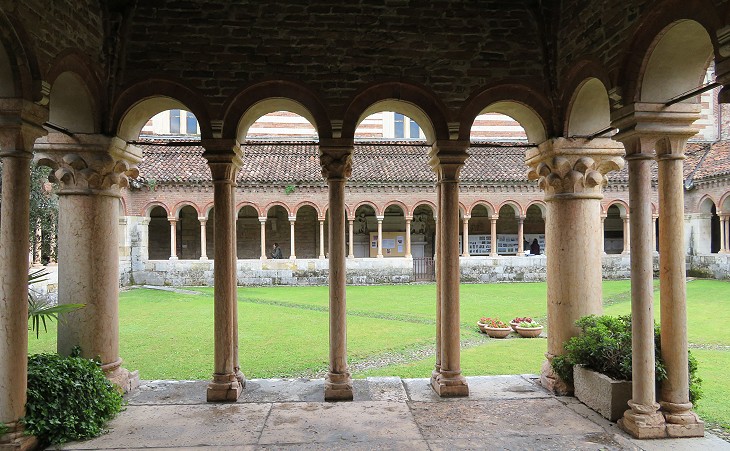 Cloister seen from a projecting part, similar to those in the cloisters of Fossanova and Monreale

The cloister of San Zeno consists of arches supported on coupled columns of red marble, united by a little appendage of the same substance at the necking of the column and at the upper torus of the base (similar to the cloister of the Cathedral). On one side is a projecting edifice, sustained by columns of different sizes, which formerly contained a large basin for the monks to wash themselves before entering the refectory; but it is now in ruins. Murray.
In 1771 the Republic of Venice suppressed the Benedictine monastery of San Zeno and during the French tenure of Verona (1801-1814) many of its buildings were pulled down. 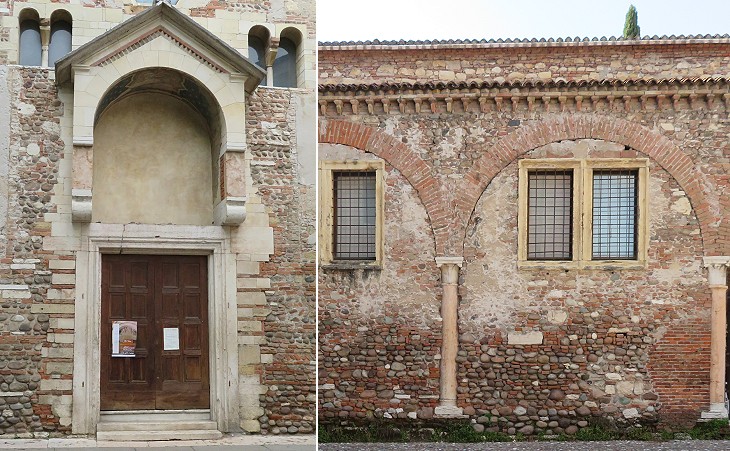 Similar to San Zeno, this church was built on a previous one. It was largely modified in the XVIth-XVIIIth centuries and it was deconsecrated by the French in 1806. Archaeological excavations in the 1980s identified some Roman tombs beneath its medieval foundations. It was partly built by using stones from the river.