You may wish to read an introduction to this section or a page with some background information on the history of Verona or a page on its theatre and amphitheatre first. 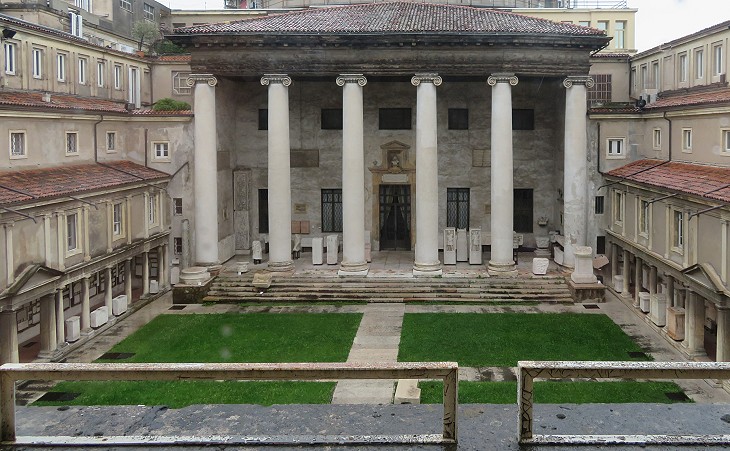 The portico of the theatre, consisting of six large Ionic columns, looks handsome enough. (..) The gallery, which incloses the fore-court, is small, and the channelled Doric dwarfs have a mean appearance by the side of the smooth Ionic giants. But we pardon this discrepancy on account of the fine institution, which has been founded among the columns. Here is kept a number of antiquities, which have mostly been dug up in and about Verona. (..) The bas-reliefs are inserted in the walls, and provided with the numbers, which Maffei gave them, when he described them in his work: "Verona illustrata". (..) Laudable as this institution is, we can plainly perceive that the noble spirit of preservation, by which it was founded, is no longer continued.
J. W. Goethe - Italian Journey - September 16, 1786 - translation by Charles Nisbeth
The Museo Lapidario contains a valuable collection of antiques, disposed in a cortile, at the end of which stands the Teatro Filarmonico. (..) It was built in 1716; but it was afterwards burnt, and it is now dilapidated.
John Murray - Handbook for Travellers in Northern Italy - 1852
Francesco Scipione Maffei (1675-1755) was a man of varied experiences and interests; he gathered a collection of antiquities which was not limited to those found at Verona, but included pieces from other parts of Italy (see an inscription from Anzio and an Etruscan cinerary urn) or from other countries (see a tombstone from Smyrna). He bequeathed his collection to the City of Verona. It is still displayed almost as it was in the XVIIIth century, because it is an interesting example of the antiquarian fashion of that time. 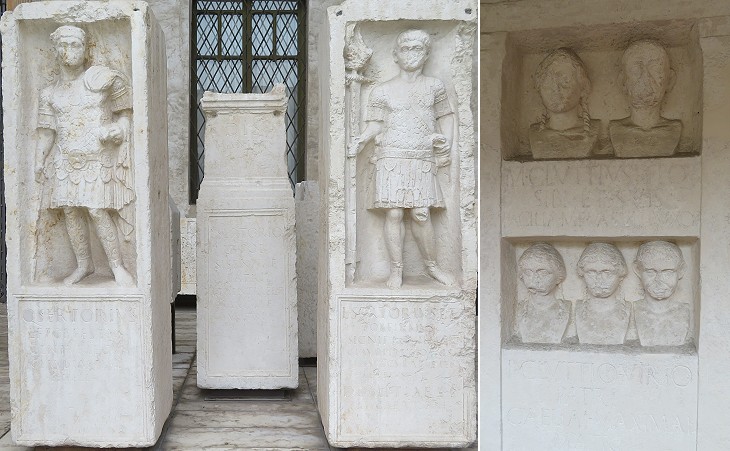 The wind which blows from the graves of the ancients, is charged with fragrance as if it had passed over hills of roses. The tombs give touching evidences of a genuine feeling, and always bring life back to us. The immediate proximity of these stones was to me highly touching. They belong to a later school of art, but are simple, natural, and generally pleasing. (..) They do not fold their hands, they do not look towards heaven, but they are here below just what they were and just what they are. Goethe
The two brothers portrayed in rich military clothing were a centurion and a standard bearer of Legio XI Claudia Pia Fidelis and the altar at the centre was dedicated to their parents. The legion received the appellation Claudia Fidelis in 42 AD because of its loyalty to Emperor Claudius. Both the Sertorii and M. Cluttius belonged to gens Poblilia, a family/clan of Roman origin. 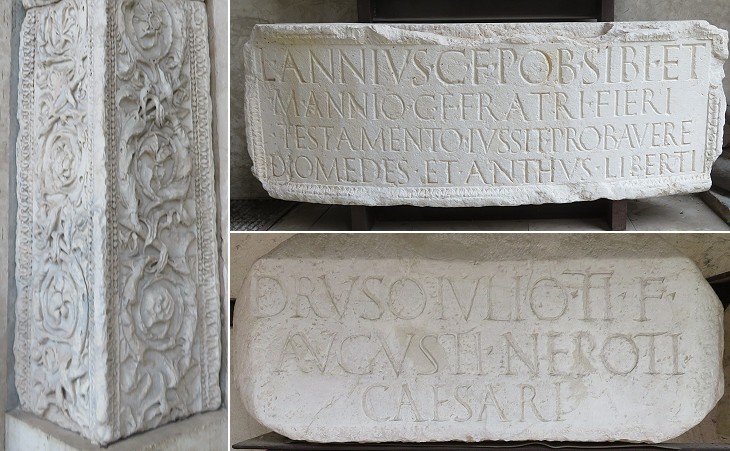 There are altars, fragments of columns, and other relics of the sort. A marble pillar, very richly adorned, gave me more new ideas. Goethe
The region around Verona had quarries of stones and marbles which favoured the activity of very skilled stonecutters, as shown by many decorative reliefs and inscriptions.

I walked through and through the town all the rest of the day, and could have walked there until now, I think. (..) There was a collection, under a colonnade, of Greek, Roman, and Etruscan remains, presided over by an ancient man who might have been an Etruscan relic himself; for he was not strong enough to open the iron gate, when he had unlocked it, and had neither voice enough to be audible when he described the curiosities, nor sight enough to see them: he was so very old.
Charles Dickens - Pictures from Italy - 1846 Because of the events of the XXth century the Roman fasces (bound bundles of wooden rods) have acquired a political significance which they did not have when they were carried by the lictores who walked before a consul or a high magistrate; they were a symbol of strength through unity. The dead is thought to have been a sevir, one of the six members of a college in charge of the ceremonies in honour of the Emperor, who was entitled to a bisellium, a folding seat of honour at the theatre. He was probably an architect because of the tools depicted in the lower part of the relief.

Maffei enriched his collection with some pieces which he bought in the very flourishing antiquarian market of Rome. He might have chosen the subject of the Fall of Phaeton because according to Ovid the event occurred in Northern Italy: Phaethon, flames ravaging his glowing hair, is hurled headlong, leaving a long trail in the air, as sometimes a star does in the clear sky, appearing to fall although it does not fall. Far from his own country, in a distant part of the world, the river god Eridanus (Po) takes him from the air, and bathes his smoke-blackened face. There the Italian nymphs consign his body, still smoking from that triple-forked flame, to the earth, and they also carve a verse in the rock: "Here Phaeton lies who the sun's journey made dared all though he by weakness was betrayed".
Metamorphoses - Book II - Translation by A. S. Kline 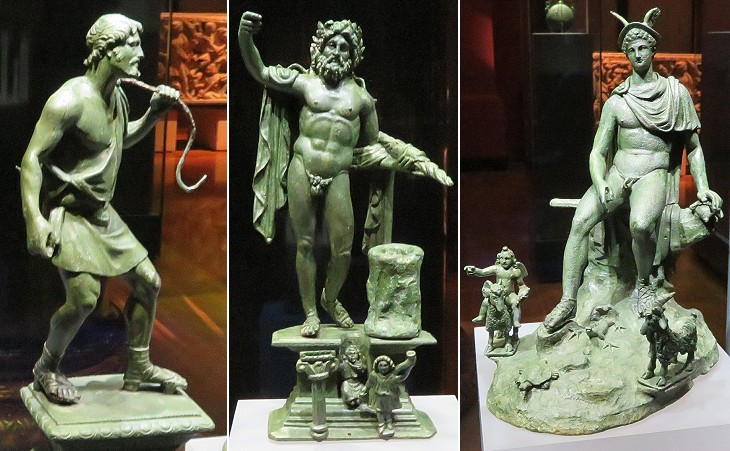 Kunsthistorisches Museum of Vienna: IInd/IIIrd centuries bronze statues from Montorio near Verona: (left to right) a hunter, Jupiter and Mercury

The treaty of Vienna, in 1814, (..) gave Austria Venice, and the whole of the Venetian terra firma. (..) These possessions were erected into a distinct kingdom, and still possess a national character widely different from the rest of Italy; and though the administration of the whole of the Austrian dominions is guided by an uniform spirit, yet the forms and details of the government are widely different from what they are to the north of the Alps. Murray
In 1797 the Republic of Venice ceased to exist; in 1814 its mainland possessions were assigned to the Austrian Empire to which they belonged until 1866 as part of Regno Lombardo-Veneto, a formally separate political entity. In general Austrian authorities, unlike the French ones, were very respectful of the works of art of their Italian dominions, but some small bronze statues which were found near Verona were sent to Vienna. 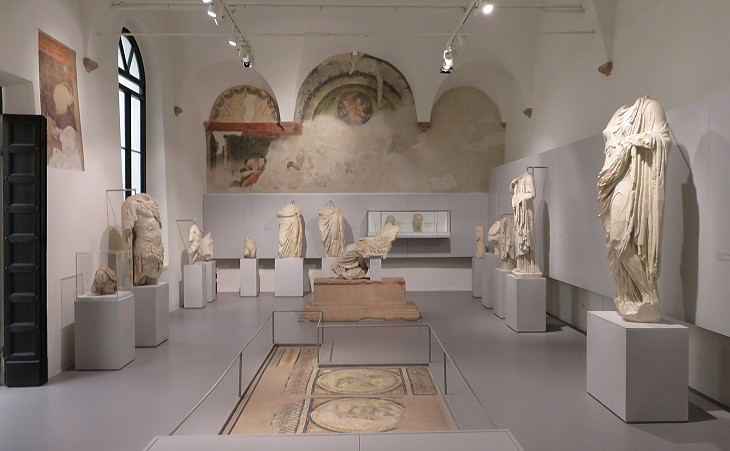 Verona Archaeological Museum: exhibits in the hall of a former convent

The City of Verona opened in 1924 an archaeological museum in the premises of a former convent which stood right above the Roman Theatre. Its collections include some exhibits which were found during the excavations of the theatre and many others from monuments of the town or of its environs. 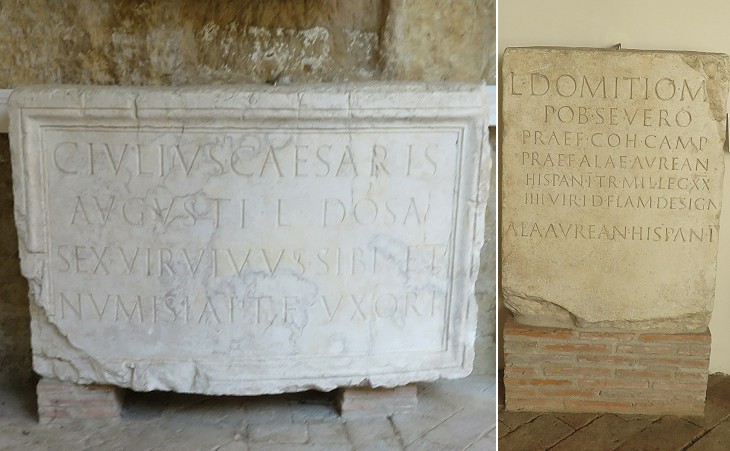 The first inscription catches the eye of the viewer because it seems to mention both Julius Caesar and Augustus. It actually refers to Dosa, a former slave of Augustus who added to his name parts of that of his master (C. Iulius Caesar Octavianus). Dosa became a sevir and his funerary inscription was carefully composed and carved to highlight his social status.
During the Republic alae (wings) were allied troops who fought at the sides of the Roman ones. During the Empire they were auxiliary cavalry units named after the country of origin of their members or their first commander. Because the Roman legions had their quarters along the Rhine-Danube border it is unusual to find references to alae in Italy, whereas the Archaeological Museums of Germany, Austria and Hungary (e.g. at Cologne and Sopron) have plenty of tombstones of alae cavalrymen. 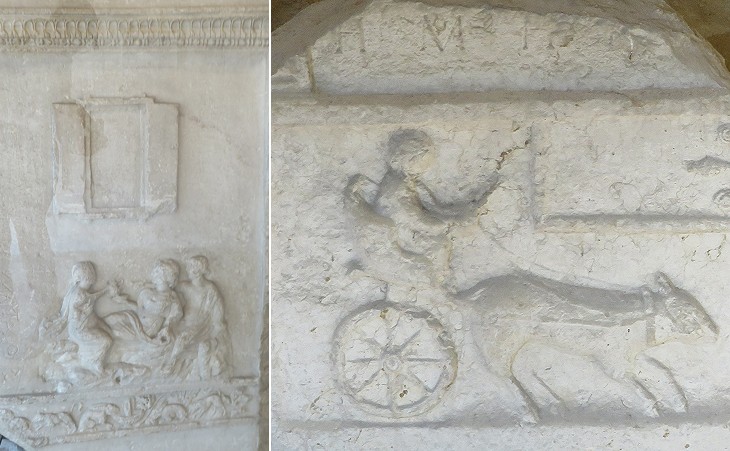 Occasionally some reliefs provide insights into the everyday life of the people of Roman Verona; the relief on the left shows that the houses had windows with shutters very similar to those which were used until the XIXth century (e.g. at Grado); that on the right depicts a cisium, a gig. According to Cicero it could cover 56 miles in 10 hours. See Terme dei Cisiarii at Ostia and other "Mirror of Life" reliefs at Augsburg and Trier. Verona Archaeological Museum: statues which were found near the Cathedral: (left) an emperor or military commander; (right) statue of a seated woman

Roman Verona and in particular its Forum and baths were ornamented with statues, but very few of them have been found. That of a military commander is dated Ist century AD; the decoration of the armour does not contain elements for the identification of the personage, but he must have been an emperor or a very high-rank commander. The pteruges (straps) with heads of animals, can be seen on a gigantic statue of Mars in Rome and on statues of emperors, e.g. from Perge.
The statue of a seated woman (a rather unusual posture) is dated IInd century AD and it could be a Roman marble copy of an ancient Greek bronze statue. It is very well executed and the foldings of the dress would have been admired by Gian Lorenzo Bernini. 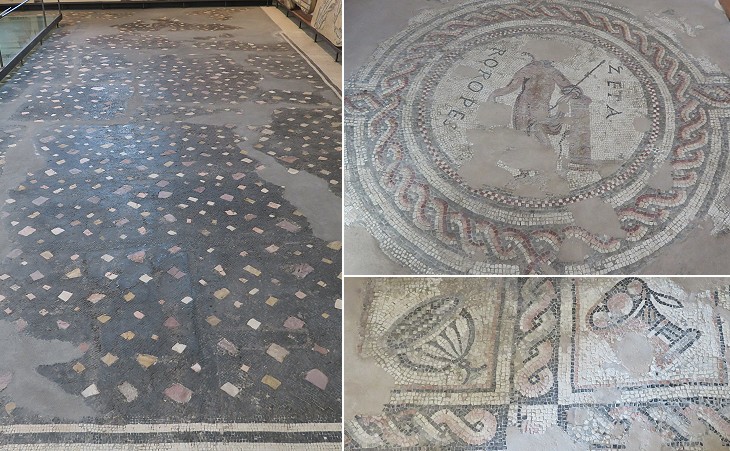 Verona Archaeological Museum: floor mosaics: (left) from a house on the hill behind the Roman Theatre (Augustan period); (right) from a house near the Amphitheatre (IIIrd century AD)

Black and white mosaics were popular in Rome (see a similar one at Villa dei Volusii near Rome), whereas the coloured ones appealed more to the provincial elites, especially those of today's Tunisia. The medallion frames an image of Bacchus/Dionysus, god of wine, a very popular subject for mosaics of triclinia, dining rooms (see a very elaborate one at Vienne in France). The Greek text in Latin alphabet is thought to mean "Roropes lives" or "Roropes' room". 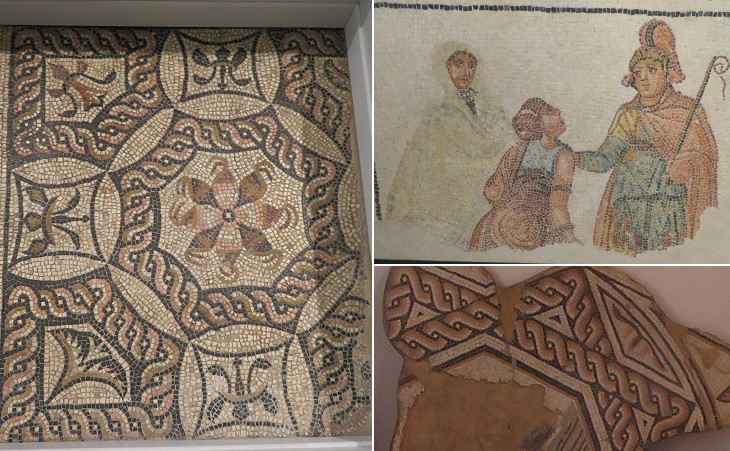 In the past archaeologists could not avail themselves of reliable techniques for safely removing entire floor mosaics and they often paid attention only to the parts with figures. The personages portrayed in one of the fragments shown above are thought to be Pelops and Ippodamia; their love story is depicted on the Temple to Zeus at Olympia. Fine floor mosaics were discovered in 1957 in a Roman villa not far from the Archaeological Museum and they were left in situ. 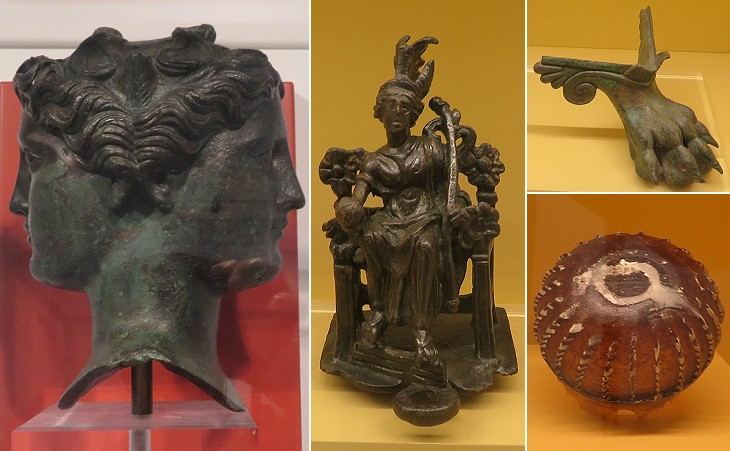 The image used as background for this page shows a funerary relief at Museo Lapidario Maffeiano which depicts a triton and was found in the environs of Verona.