The south-western section of the Esquiline Hill was called Fagutal by the ancient Romans because it was covered by a wood of beech trees (Lat. Fagus); in 1758 when Giuseppe Vasi made this etching it still retained some tall trees. A small ravine near the nunnery of S. Lucia in Selci separated Fagutal from Cispius, the highest peak of the Esquiline, where S. Maria Maggiore stands on a commanding position. This page covers also other minor churches on the Fagutal.
The view is taken from the green dot in the 1748 map below. In the description below the plate Vasi made reference to: 1) Monastero di S. Lucia in Selci; 2) Cappellina del SS. Salvatore. The small map shows also 3) Monastero della Purificazione; 4) S. Maria ad Nives; 5) Madonna del Buon Consiglio; 6) S. Maria in Carinis; 7) Sette Sale. 1) and 7) are covered in other pages.

The view in March 2010: (left) Torre de' Capocci (which at Vasi's time was part of the nunnery of S. Lucia in Selci); (right) part of the former façade of S. Maria della Purificazione

In 1810 the nunnery of S. Maria della Purificazione was confiscated by the French authorities and it was used as a barracks for their troops; later on the property was sold and modified; eventually in ca. 1900 it was acquired by Canonici Regolari Lateranensi, a religious congregation based in the nearby Monastery of S. Pietro in Vincoli. In 1949 the new owners turned the building into a college (Collegio San Vittore dei Canonici Lateranensi); at that time the church was in ruin and it was replaced by the library of the college which incorporated the lower part of the façade; a symbol of the congregation was placed above the former entrance (it is shown in the image used as background for this page). 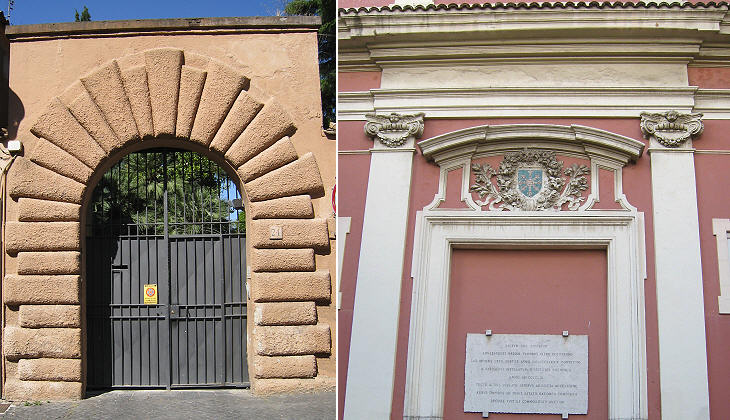 (left) Portal in Via delle Sette Sale; (right) former entrance to the church with plaque celebrating the 1949 foundation of the college

Mario Ferro Orsini was born on Candlemas 1511; in the will he made in 1588 he left a significant amount of money for the construction of a nunnery and a church dedicated to the Purification of Virgin Mary, which is celebrated on Candlemas; the feast is also named after the Presentation of Jesus at the Temple.
The construction of the new buildings was completed by the year 1600 and the nunnery was assigned to the Poor Clares who resided there until the French confiscation.
In the early XVIIIth century an ancient underground chapel was found in the garden of the nunnery; it was dedicated to the Saviour owing to traces of a fresco portraying Jesus in the act of blessing. Today the level of the ground is higher than at Vasi's time and what is left of the chapel is almost entirely buried and access to it is dangerous. 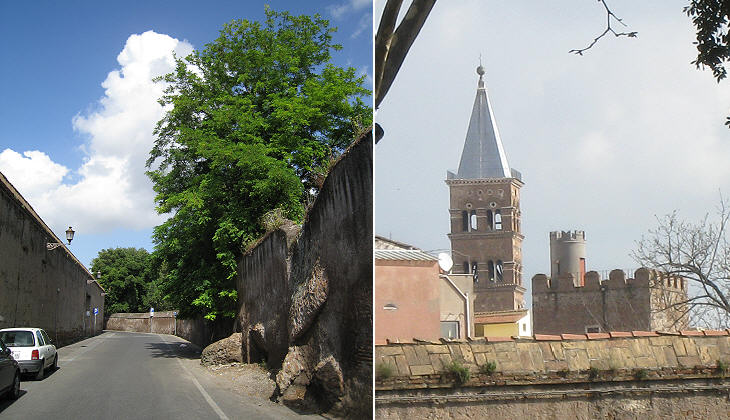 A section of Via delle Sette Sale (named after the cisterns of Terme di Traiano) could be included among the silent streets of Rome, small havens in the heart of the city where time has stopped. 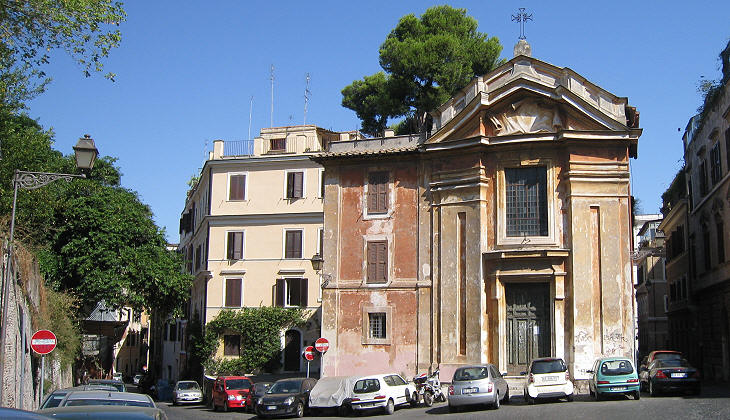 Medieval records mention a church called S. Andrea del Portogallo in this part of Fagutal; the reference to Portogallo had nothing to do with Portugal, but with Porta dei Galli, a nearby lost gate through which the Gauls entered Rome in 390 BC. In 1606 it was assigned to Università dei Rigattieri, the guild of the junk dealers, who dedicated it also to St. Bernardine of Siena, their patron saint and who decided to rebuild the church. As a matter of fact it was only in the 1720s that the new church was consecrated; there is uncertainty about the architect who designed its façade (Giuseppe Sardi or Carlo Fontana).
The guild of the junk dealers was dissolved in 1801; in 1824 the church was assigned to Confraternita di S. Maria della Neve - a brotherhood named after the Miracle of the Snow (It. neve) associated with the foundation of S. Maria Maggiore - and the church was given its current name. 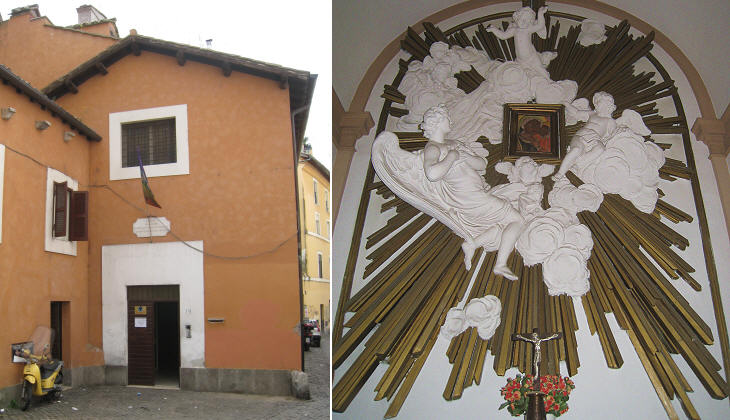 A church dedicated to St. Pantaleon is mentioned in XIIth century records; in the late XVIth century it was also dedicated to St. Blaise, after the pulling down of a nearby church named after him. In 1753 the small building was assigned to Arciconfraternita della Beatissima Vergine del Buon Consiglio, a brotherhood devoted to the worship of a sacred image of the Virgin Mary kept in Genazzano and its name was changed. A very small chapel dedicated to the same sacred image is not far away.
Currently the church, spoiled of most of its works of art/decorations, is utilized by the Combonian Fathers for their charitable activities. 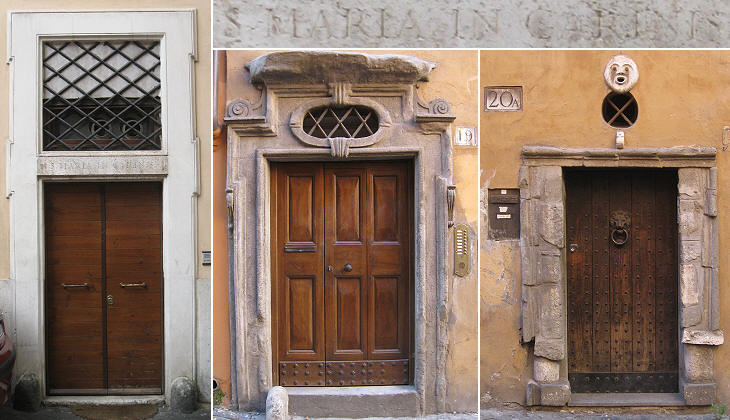 (left) S. Maria in Carinis; (centre/right) portals in nearby Via dei Frangipane

A quotation by Virgil indicates that Carinae was a quarter or street of Rome on the slope of the Fagutal to the north of the Roman Forum, occupied by wealthy citizens; carina means the underwater part of a hull and Carinae could have been a reference to the shape of the slope or to something resembling boats. The ancient name of the site was used to identify a small friary which housed between 1780 and 1805 the Cistercians of S. Bernardo alle Terme. An inscription above a door retains the name of the church.
The neighbourhood has some interesting XVIth century houses.