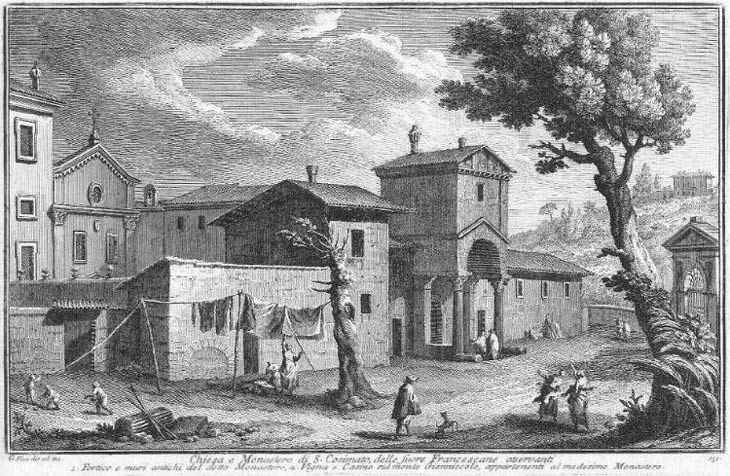 In 1758 when Giuseppe Vasi planned the contents of his eighth book of etchings which covered the nunneries of Rome, he was aware that travellers who bought his plates to have a memento of their Roman stay, would not have been much interested in the new book. He therefore added a touch of Italian colour to some of the views, e.g. he depicted washing hanging on the line outside S. Cosimato, a nunnery in a rather remote corner of Trastevere. As the 1748 map below shows the monastery was inside the walls of Rome, but at the very limit of the populated area.
The view is taken from the green dot in the map. In the description below the plate Vasi made reference to: 1) Entrance and ancient walls of the monastery; 2) Vigna (farm) belonging to the monastery. The map shows also: 3) Church of S. Cosimato; 4) Main cloister; 5) Villa Sciarra; 6) approximate site of Tempietto Siriaco. 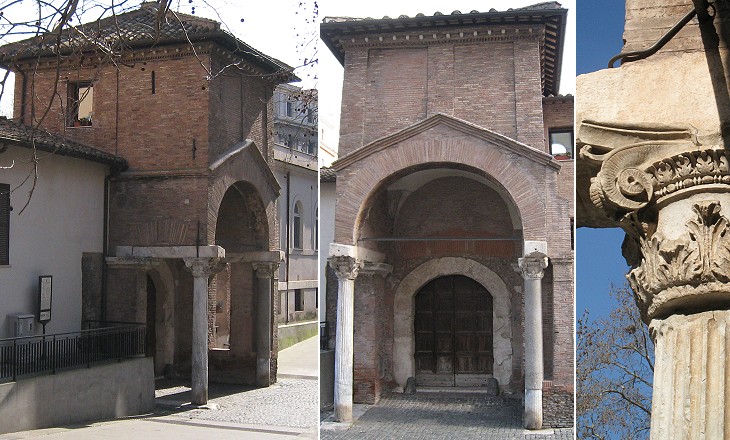 (left-centre) The view in February 2009; (right) detail of a column

Piazza S. Cosimato is today best known for its many restaurants than for the nunnery. The entrance is a XIIth century work which makes use of two ancient columns; it is very similar to those of other medieval churches e.g. S. Clemente. In 1873 the nunnery was closed and it became first a hostel for old people and eventually a hospital which is accessed via a modern entrance on the back, so that the historical one is always closed. 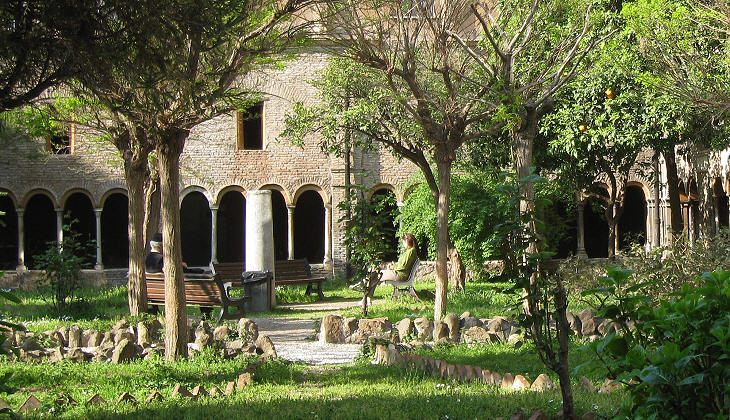 The faithful will look in vain for a Cosimato in a directory of saints because Cosimato is a corruption of Cosimo, the Italianized name of St. Cosmas who with his brother Damian was a physician in Aegea, medieval Laiazzo and today's Yumurtalik. In this way this nunnery was distinguished from the Franciscan friary dedicated to SS. Cosma e Damiano in the Roman Forum. The building was founded in the Xth century and it belonged to Benedictine monks, but in 1234 it became a nunnery as it was assigned to Recluse di S. Damiano, the name by which the first followers of St. Clare of Assisi were known. 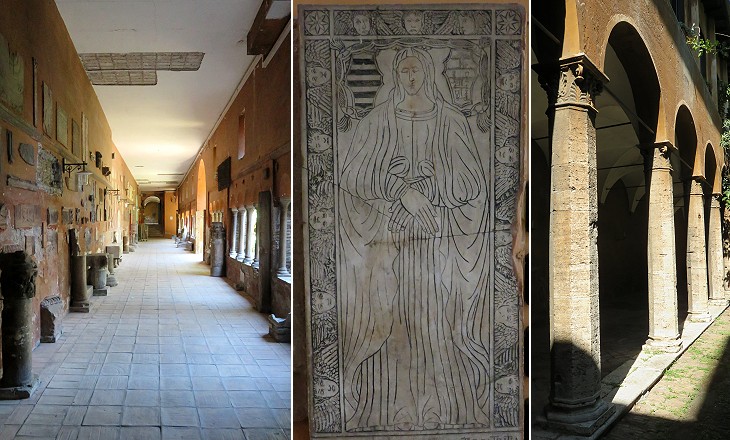 (left) Lapidary gallery in a wing of the main cloister; (centre) gravestone of Margherita Maleti (d. 1538) who lost her husband during the 1527 Sack of Rome when she was twenty-one and retired to the nunnery; (right) cloister built by Pope Sixtus IV

In 1475 Pope Sixtus IV whose sister Franchetta was a nun at S. Cosimato, enlarged the nunnery and rebuilt its church (you can see his coat of arms in the image used as background for this page). 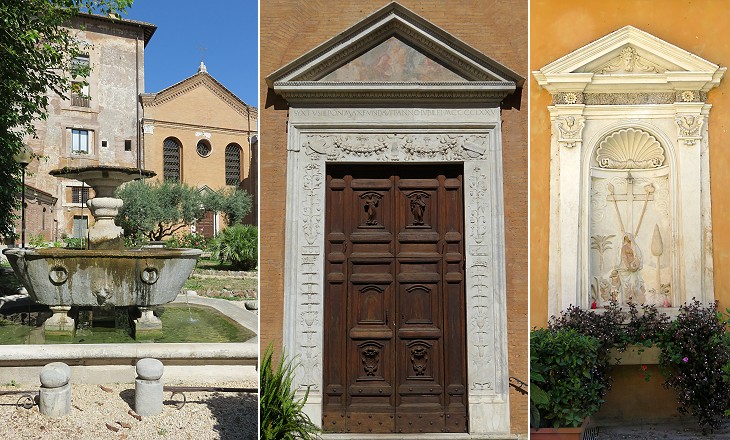 (left) 1731 fountain in the first courtyard; it utilizes an ancient basin similar to, albeit smaller than those at Piazza Farnese; (centre) portal of the church; (right) sacred image showing a cross with a spear and a sponge

The court contains an antique fountain, and is exceedingly picturesque. The church has carefully sculptured details of cornice and moulding; the door is a good specimen of medieval wood-carving.
Augustus J. C. Hare - Walks in Rome - 1875
The small church of the nunnery was modified during the XIXth century and its windows are no longer those shown in the plate; it retains the fine 1475 portal attributed to the school of Andrea Bregno. 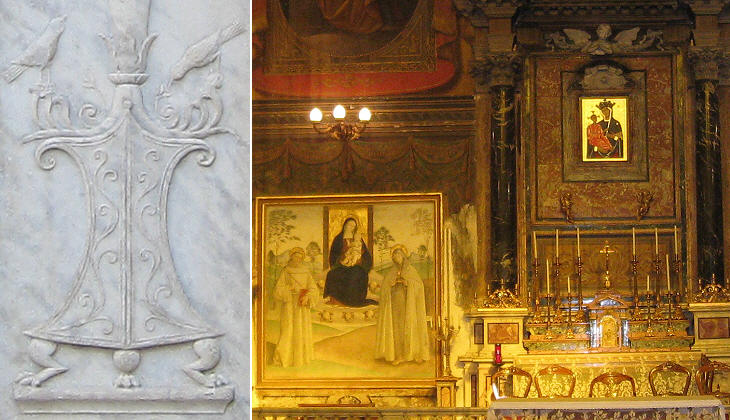 (left) Detail of the portal; (right) interior of the church with a painting portraying the Virgin Mary between St. Francis and St. Clare by Antonio del Massaro (1450-1516) and an XVIIIth century altar 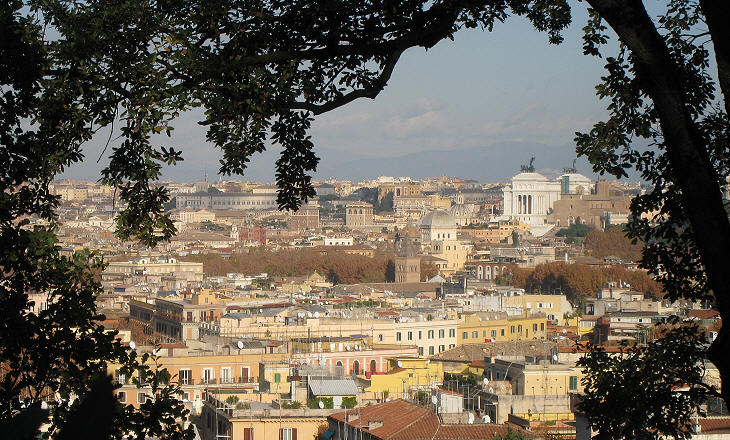 A framed view of Rome from Villa Sciarra

In 1644 Pope Urban VIII protected Trastevere with new walls and in 1653 his nephew Cardinal Antonio Barberini bought most of the land next to the walls between Porta Portese and Porta S. Pancrazio to build a summer residence. His heirs however preferred to use the villa they had near Porta S. Spirito and their estate in Trastevere was mainly used as a farm. With the extinction of the Barberini family and after endless legal battles, in 1811 the property was acquired by the Colonna di Sciarra, who gave the villa its current name and enlarged it by acquiring the land belonging to Monastero di S. Cosimato. In the 1880s Prince Maffeo Sciarra Colonna went bankrupt. The estate was split and a large part of it became a residential area. 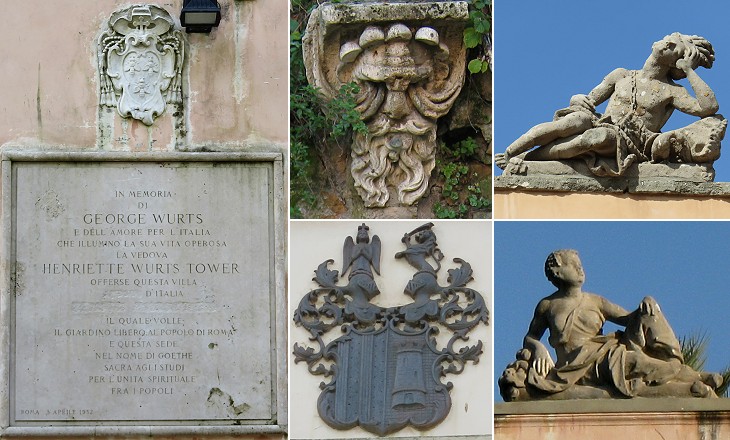 (left): Coat of arms of Cardinal Barberini and 1932 inscription celebrating the donation of Villa Sciarra to Benito Mussolini, whose name was eventually erased; (centre-above) a relief which can be seen also above the entrance to Palazzo Colonna di Sciarra; (centre-below) coat of arms of the Wurts Tower; (right) statues of America (above) and Africa (below) enjoying the Roman sunshine on the roof of the small casino

In 1902 George Wurts and Henriette Tower, a very rich American couple, bought the part of the estate near the walls and restored it (the area had been largely damaged in 1849 during fights between French troops and supporters of the Roman Republic). 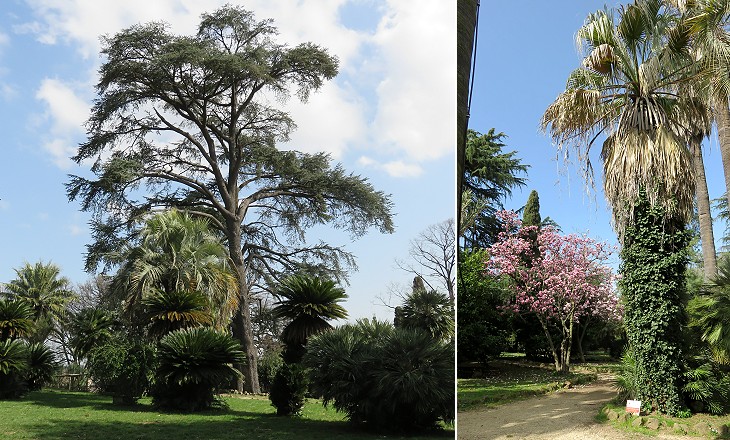 From the New York Times of January 5, 1913, we learn something about life at Villa Sciarra: George Wurts and his wife, who is a sister of Charlemagne Tower Jr., once Ambassador here, have returned to Rome to their apartment in the Palazzo Anticimattei and spend part of every day at their villa on the Janiculum ... where Mr Wurts devotes much of his time to his wonderful collection of birds and plants. 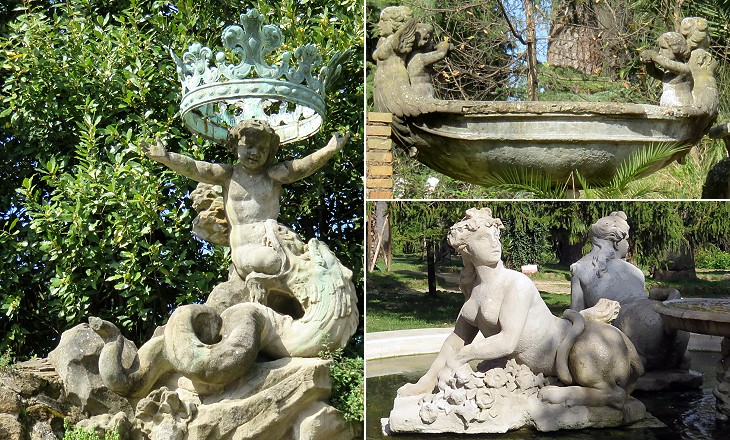 Fountains of Villa Sciarra: that on the left and others are decorated with a "Biscione" (grass-snake) with a child coming out of its mouth. It is most likely derived from the story of Jonah being released from a whale. It was the heraldic symbol of the Visconti, Dukes of Milan until the XVth century. It eventually became a symbol of the city itself

George Wurts decorated Villa Sciarra with fountains and statues from an XVIIIth century villa near Milan. Their subjects and style are quite different from those of other Roman villas; they were placed in order to create some cosy corners, rather than being arranged in a formal layout, as at Villa d'Este. 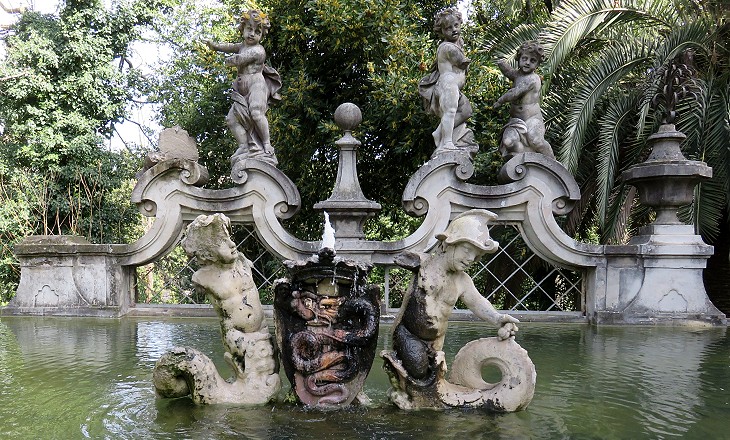 In 1928 George Wurts died and in 1930 his widow donated Villa Sciarra to the City of Rome. She did this as a personal gift to Benito Mussolini, the founder of the Fascist Party, whom at that time enjoyed wide support in many European and American circles.
I could not help being charmed, like so many other people have been, by Signor Mussolini's gentle and simple bearing and by his calm detached poise in spite of so many burdens and dangers. Secondly, anyone could see that he thought of nothing but the lasting good, as he understands it, of the Italian people, and that no lesser interest was of the slightest consequence to him.
Mr. Churchill on Fascism - from the Times on 21st January, 1927. 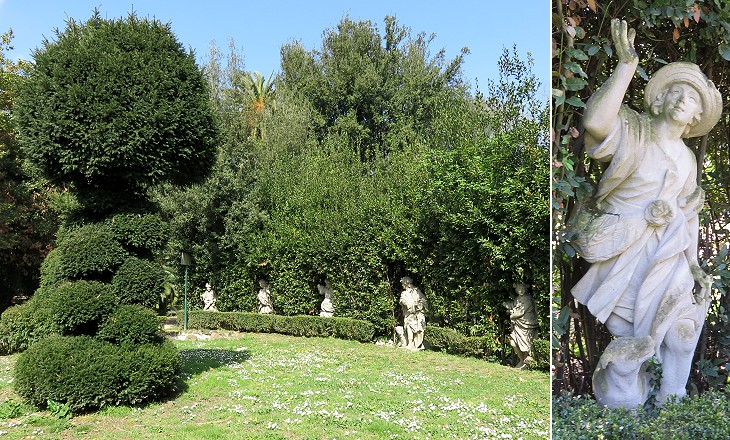 Statues of the Twelve Months 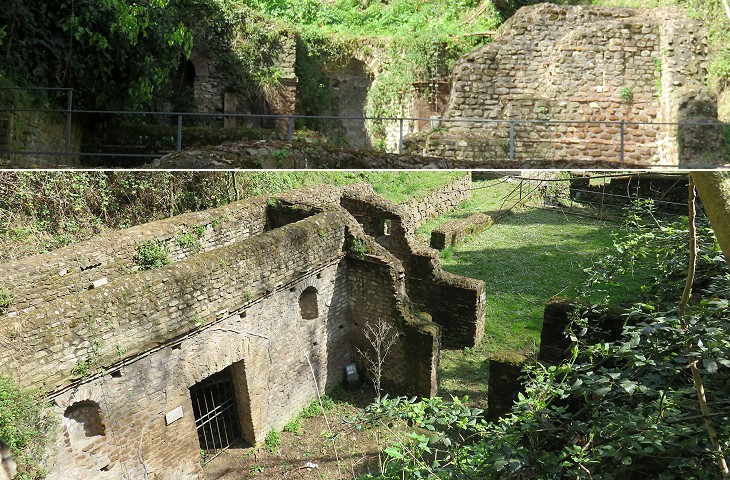 Views of the temple

In 1906 George Wurts ordered the construction of a small ancillary building in the lower part of Villa Sciarra. Workers found a number of ancient altars and inscriptions. In the following years archaeological excavations identified a long and narrow building which was utilized as a temple over a long period of time, most likely until ca 337 AD when its roof collapsed because of fire. 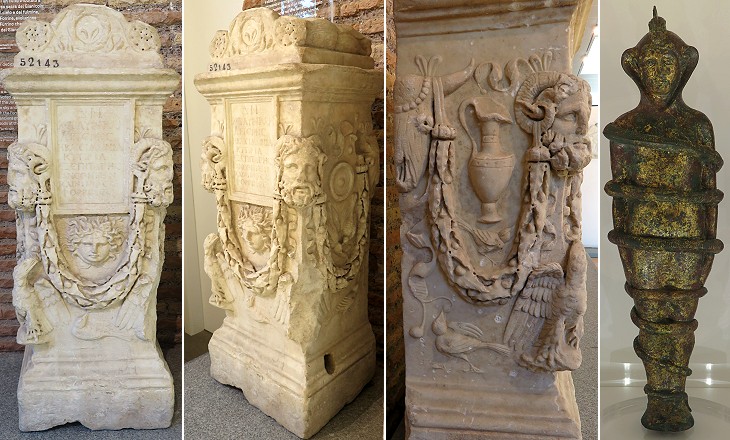 Museo Nazionale Romano: (left) altar to Zeus Keraunios (Thunderer) and to Furrinae, local spring nymphs (IInd century AD); it was erected by a woman from Cyprus; (right) bronze statue, most likely portraying Simios, an Egyptian god similar to Greek Hermes (IIIrd century AD). The coils of a snake, a symbol of resurrection, were not unique to Simios; they can be seen around a lion, a pine tree and the rod of Asclepius

The temple is named after Syria as a general reference to the eastern Mediterranean countries where the worship of Greek and Egyptian gods had created new deities having mixed features. These deities were popular among the many citizens from those countries who lived in Rome. 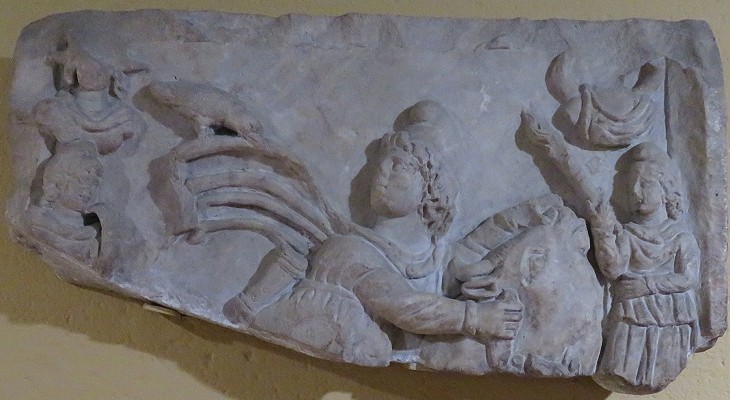 Brussels Art & History Museum: relief depicting Mithra slaying the bull which was found in the environs of the temple