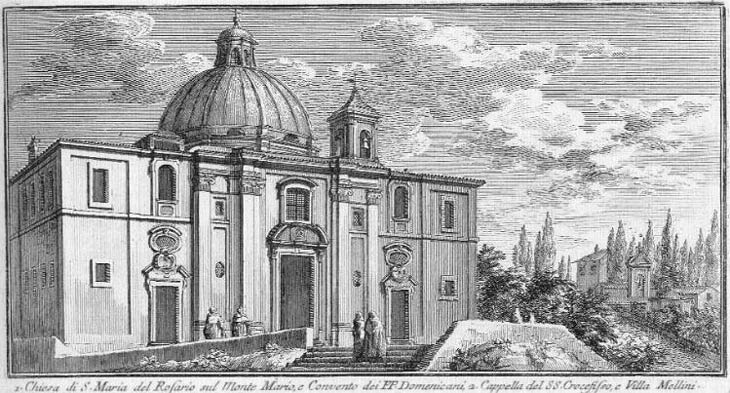 In his 1756 book covering the friaries of Rome, Giuseppe Vasi did not show S. Maria sopra Minerva, the church of the main Dominican convent, but he preferred to focus on S. Sabina, a convent and church associated with St. Dominic's stay in Rome, and on the far away friary of S. Maria del Rosario sul Monte Mario which was assigned to the Dominicans at the beginning of the XVIIIth century. Vasi probably liked the new design of the building by Filippo Raguzzini.
The view is taken from the green dot in the late XIXth century map below. In the description below the plate Vasi made reference to: 1) S. Maria del Rosario; 2) Cappella del SS. Crocifisso and Villa Mellini. The small map shows also 3) S. Lazzaro in Borgo; 4) Casale Strozzi; 5) Villa Massimo alla Balduina; 6) S. Francesco d'Assisi a Monte Mario aka S. Onofrio di Campagna; 7) Fontanile di Pio IX. 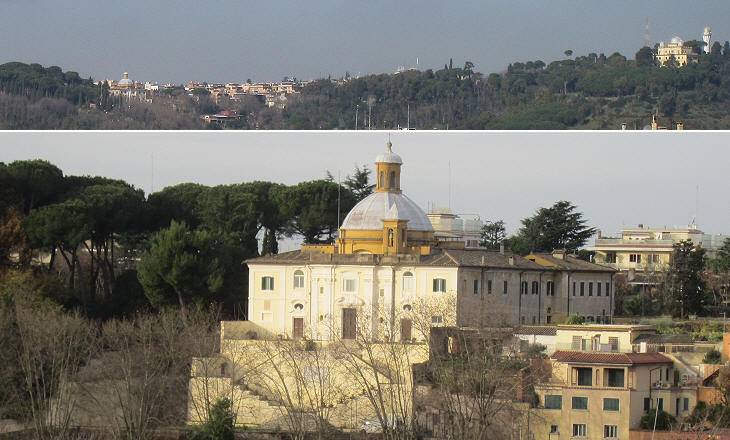 (above) View of Monte Mario from Loggia di Paolo III in Castel Sant'Angelo in February 2010; (below) S. Maria del Rosario seen from Villa Mellini in December 2010

Monte Mario is the hill which stands to the north of Prati di Castello, the meadows outside Porta Castello where the Romans had their picnics in the XVIIIth century. The hill has been regarded as part of the historical landscape of Rome and (exception made for a luxury hotel in the 1950s) it has been developed only on the side which is not visible from the city.
In 1838 Pope Gregory XVI built new steps to facilitate the access to S. Maria del Rosario; Cappella del SS. Crocifisso was damaged in 1849 during the Defence of Rome and in 1883 it was eventually pulled down to enlarge the street leading to Villa Mellini, which was turned into an astronomical observatory. 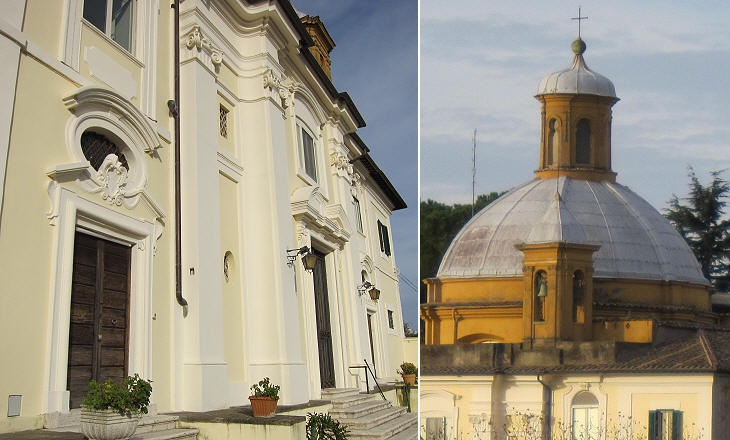 (left) Façade; (right) dome and bell tower (also in the image used as background for this page)

S. Maria del Rosario was built in the XVIth century as a parish church, but Pope Clement XI assigned it to the Dominicans and Pope Benedict XIII, a Dominican himself, commissioned the enlargement and redesign of the complex. During the French annexation of Rome the friary was closed; after the return of the popes it was assigned to Dominican nuns who still live in the building and attend mass behind a screen, as their rule requires strict seclusion. (left) Madonna di S. Luca; (right) one of the small chapels which is decorated with the symbol of the Dominicans (a dog holding a torch)

The icon is aka Madonna di S. Sisto because it was originally located at S. Sisto Vecchio. It is an VIIIth century acheiropoieta image, i.e. it was not made by human hand; according to tradition St. Luke was the first icon painter. It was moved to this church in 1931. The image visible from the church is a copy because the original is on the other side and can be seen only from the nunnery.
The altarpiece by unknown painter shown above depicts the following event which occurred in the Convent of San Domenico in Soriano Calabro: On 15 September, 1530, three mysterious women appeared a few hours before Matins and one of them entrusted into the hands of the sacristan a roll of canvass to be presented to the House Superior. The friars found out later that the canvass had a painting of Saint Dominic. It was later revealed that the three ladies were in fact the Virgin Mary accompanied by Saint Catherine of Alexandria and Saint Mary Magdalene. When the picture was exposed to public veneration, a multitude of prodigies took place, the account of which fills volumes. No less than sixteen hundred of these miracles, juridically attested, took place within the space of seventy-eight years. Pope Innocent X, in the year 1644, granted a festival in commemoration of this event and of the vast number of miracles through this holy painting.
From the Veritas in Charitate website (it opens in another window).
The convent was razed to the ground by an earthquake in 1783. 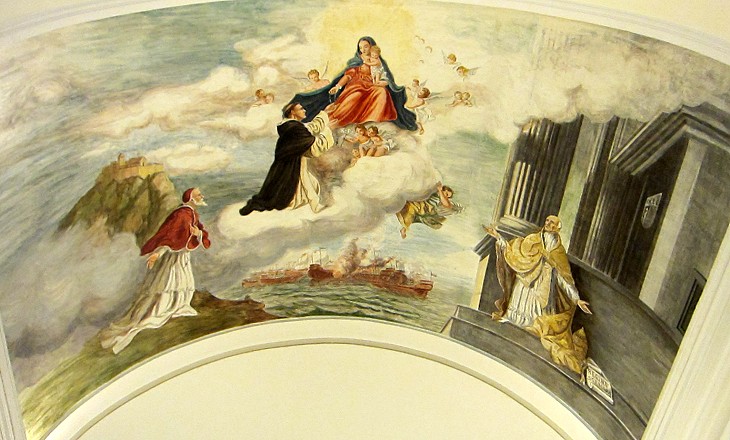 Modern painting celebrating a vision by St. Dominic and the institution of the Feast of Our Lady of the Victory/Rosary by Pope Pius V (left) who had been a member of the Dominican Order. Pope Leo XIII (right) issued an encyclical letter on devotion of the Rosary in 1883; you may wish to see the same subject in a fine stucco by Giuseppe Serpotta in Palermo 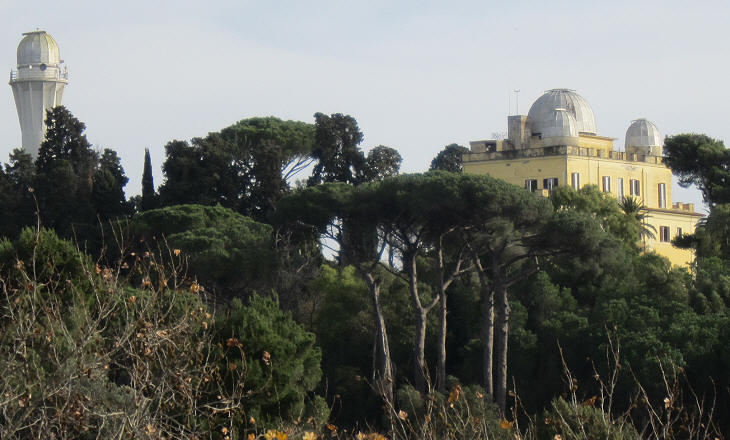 According to Vasi the hill was named after Mario Mellini (or Millini), who built his villa on its top. He had a house/tower near S. Maria dell'Anima and his heirs bought a palace in Via del Corso and had a family chapel at S. Maria del Popolo.
The building was greatly modified in 1939 when it was turned into the Astronomical Observatory of Rome (previously at Collegio Romano and at Palazzo Senatorio); it currently houses a small museum because the observatory was moved to Monte Porzio Catone after WWII and in 1965 to Campo Imperatore, a plateau on the Apennine Mountains at an altitude of 1,800m/6,000ft. (left) View towards S. Pietro and Prati, a modern neighbourhood which has replaced the meadows outside Porta Castello; (right) view towards Ponte Emanuele Filiberto di Savoia Aosta and Ponte Milvio

Hinc septem dominos videre montes. Et totam licet aestimare Romam (from this point you can see the seven hills and appreciate Rome in its entirety) this sentence by which Latin poet Martial (Book 4 - Epigram 64) described the view from a friend's farm is generally interpreted as being referred to the Janiculum and Vasi included it in his 1765 Grand View of Rome; some historians however believe Martial was referring to Monte Mario. As a matter of fact Villa Mellini commands an excellent view over the City of Rome, but it is a view from a long distance and the monuments of Ancient Rome are barely visible. 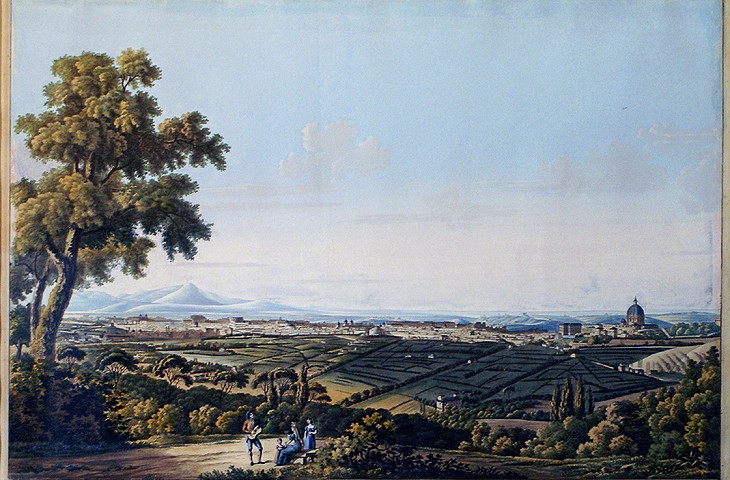 View of Rome from Monte Mario: coloured engraving from a painting by Jacob Philipp Hackert (ca 1780)

I now revived my botanical speculations, which I had indulged in the other day during a walk towards Monte Mario, to the Villa Mellini, and the Villa Madama. It is very interesting to observe the working of a vigorous unceasing vegetation, which is here unbroken by any severe cold. Here there are no buds: one has actually to learn what a bud is. The strawberry-tree is at this season, for the second time, in blossom, while its last fruits are just ripening. So also the orange-tree may seen in flower, and at the same time bearing partially and fully ripened fruit. (..) As to the cypress, that most "venerable" of trees, when it is old and well grown, it affords matter enough for thought.
J. W. Goethe - Italian Journey - November 29, 1786 - 1885 edition by George Bell and Sons
A delightful walk last Sunday to Monte Mario. (..) We strolled up the winding road to the Villa Mellini, where one of the greasy peasants huddled under the wall in the sun admits you for half a franc into the finest old ilex-walk in Italy. It is all vaulted grey-green shade with blue Campagna stretches in the interstices. The day was perfect; the still sunshine, as we sat at the twisted base of the old trees, seemed to have the drowsy hum of midsummer - with that charm of Italian vegetation that comes to us as its confession of having scenically served, to weariness at last, for some pastoral these many centuries a classic.
Read more of Henry James's account of his visit to Villa Mellini in January 1873. S. Lazzaro in Borgo is a tiny XIIth century church at the foot of Monte Mario which was part of a small hospital for pilgrims who were suspected to be affected by leprosy; for this reason it was dedicated to Lazarus the Beggar, who was venerated as patron saint of lepers; according to Vasi the hospital was closed in the XVIIIth century when S. Gallicano was opened. 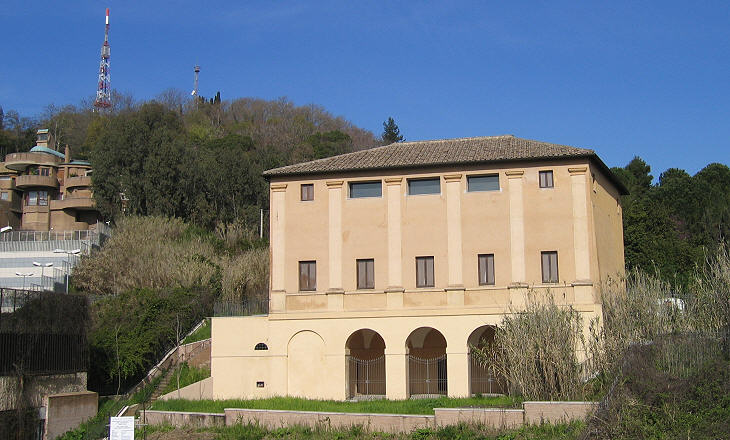 The modern road which reaches S. Maria del Rosario separates two farms which belonged to the Roman branch of the Florentine Strozzi family. One of the farms has an elegant design which is attributed to Giacomo Del Duca; it was probably utilized as a countryside residence because some of its rooms were decorated with frescoes. The Strozzi had a family chapel at S. Andrea della Valle and a palace nearby. Abito alla Balduina (I live at Balduina) is not only an indication of where you live, but a sort of status symbol which says that you are very wealthy (or that you pretend to be). It is very expensive to buy or rent a flat in this modern quarter of Rome, which is located behind Monte Mario on the site of some old villas, chiefly of Villa Massimo. The pines which surround the most expensive apartment blocks were planted in those villas.
Balduina is most likely a reference to an estate belonging to Baldovino Ciocchi del Monte, brother of Pope Julius III. The Pope had a villa opposite Monte Mario on the other side of the River Tiber. 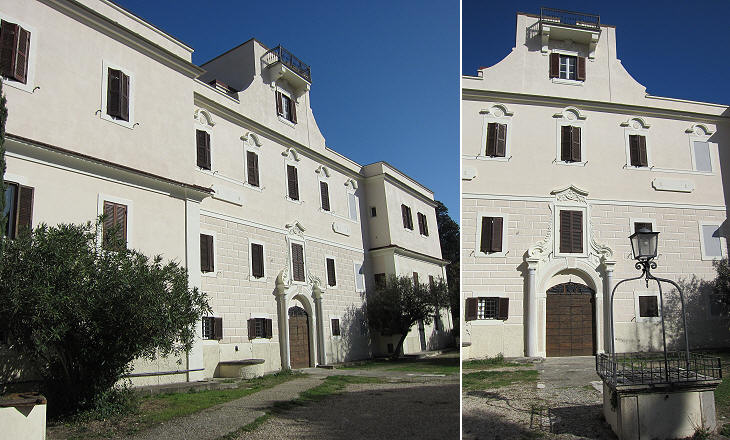 The casino of Villa Massimo still exists at No. 296 of Via della Balduina, behind a modern church. The two wings have lost their late XVIIth century decoration, but the central part retains it. The Massimo later on bought a villa near S. Giovanni in Laterano, a second one near Piazza di Termini and they had another villa near Via Nomentana. They sold their property on Monte Mario towards the end of the XIXth century. 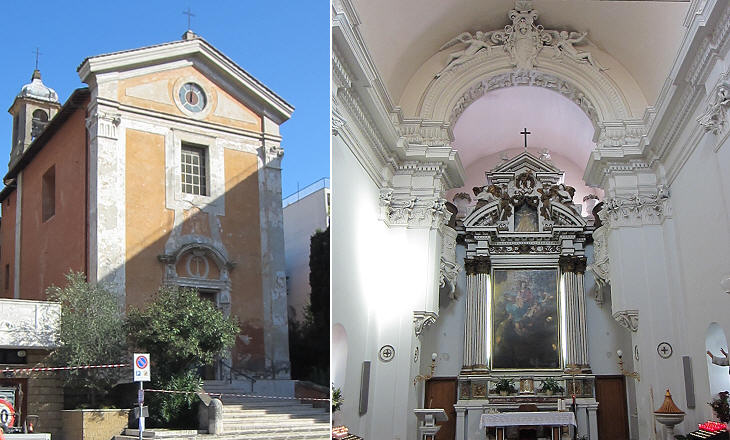 Pilgrims from Florence to Rome travelled by Via Cassia; when they arrived near the city they had the option to continue along this road to Ponte Milvio and enter Rome at Porta del Popolo or to directly reach the Vatican through Via Trionfale which was so named because it was used by Roman commanders returning to Rome after a victorious campaign.
In 1209 St. Francis of Assisi, on his way to Rome, at a turn of Via Trionfale first saw the city and he knelt and prayed. A church dedicated to him was built on that site by Pope Benedict XIII; it served the inhabitants of Borgo Clementino, a small settlement founded by Pope Clement XI.

The church was aka S. Onofrio in Campagna because it was officiated by the monks of S. Onofrio. The site upon which it stands was called Monte Gaudio (of Joy) for the joy it gave pilgrims when they saw Rome. 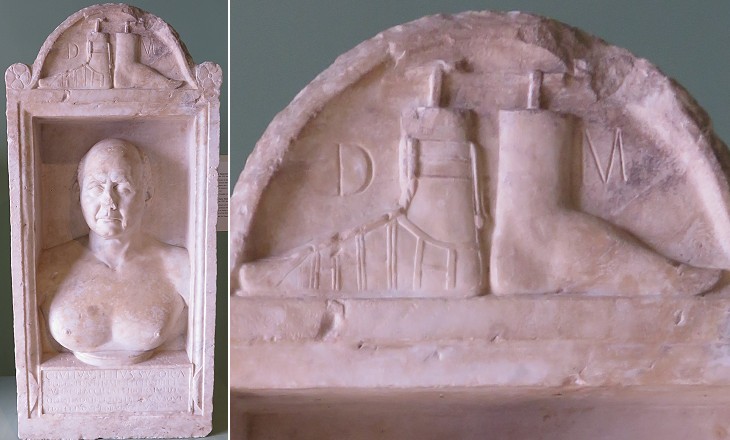 Centrale Montemartini: stela of C. Julius Helius. It was found in 1887 in Via Trionfale (late Ist century AD)

By watching the naked bust and the portrait of the dead, one is easily led to believe he was a Roman senator or a military commander. The inscription however states his trade immediately after his name. He was a sutor, a shoemaker with a workshop at Porta Fontinalis. The exact location of this gate has not been determined, but it is generally thought it was near today's Piazza Venezia, close to Sepolcro di Caio Publicio Bibulo. It was therefore near the Roman Forum and C. Julius Helius sold his sandals to rich and important customers. He probably decided to be portrayed as one of them, contrary to a popular Latin saying (Sutor ne supra crepidam) which advised shoemakers not to exceed their limited expertise when making judgements. You may wish to see a page on Roman Feet and Sandals and the tombstone of a shoemaker of Durocortorum (Reims) who chose to be portrayed in his workshop. 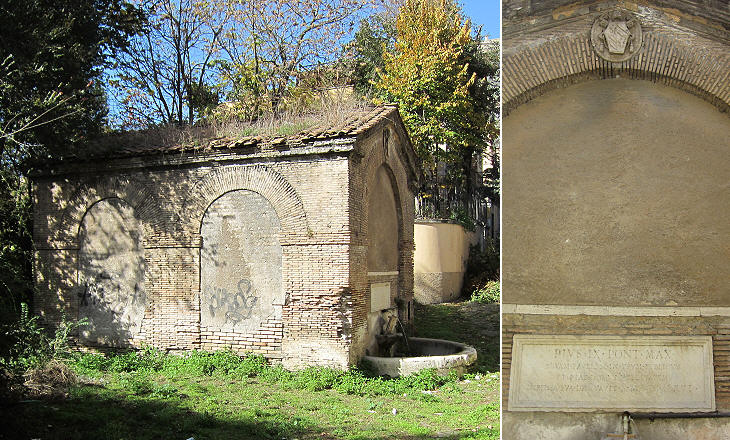 The Papal State between 1860 and 1870 was limited to Latium, the region around Rome; Pope Pius IX was confronted with severe budget constraints and therefore he celebrated with his coat of arms and inscriptions even the most modest improvements he made to public facilities, such as a series of sheltered basins for washing clothes for the women of Borgo Clementino.