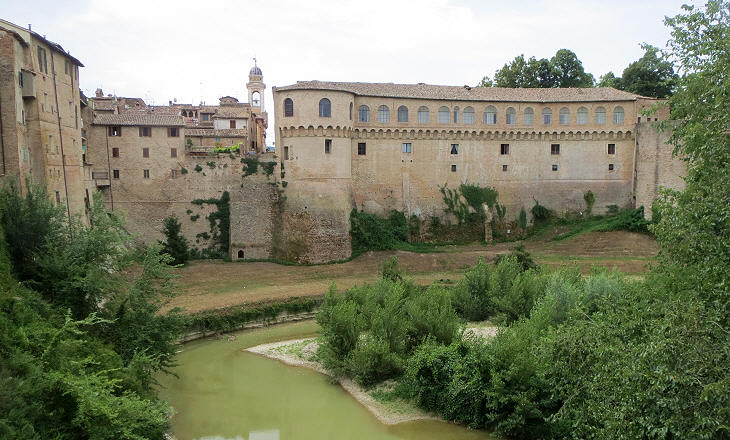 Castel Durante was founded in 1284 by the inhabitants of a nearby small settlement which had been destroyed by the inhabitants of Urbino during a conflict for the control of the upper valley of the River Metauro. The town was named after Monsignor Guglielmo Durante, an envoy of Pope Martin IV who promoted its foundation. It became part of the Duchy of Urbino in 1424.
In the administrative structure of the Duchy, Castel Durante was not regarded as a town because it was not a bishopric seat, but it enjoyed a special status as the "capital" of Massa Trabaria, a mountainous region between Urbino, Arezzo in Tuscany and Città di Castello in Umbria. Its name is thought to derive from travi (wooden beams) which were floated to Rome along the Tiber from Città di Castello. Palazzo Ducale of Urbino: "Rinfrescatore", basin for washing hands and face made in Castel Durante. The central scene depicts "The Judgement of Paris"; the frame is decorated with the eagle of the da Montefeltro

Castel Durante was renowned for its maiolica workshops. Painters were involved in the elaborate decoration of maiolicas which served many different purposes and were widely appreciated throughout Europe. They were known as durantine. The image used as background for this page shows a detail of a chandelier in Palazzo Ducale di Urbino. 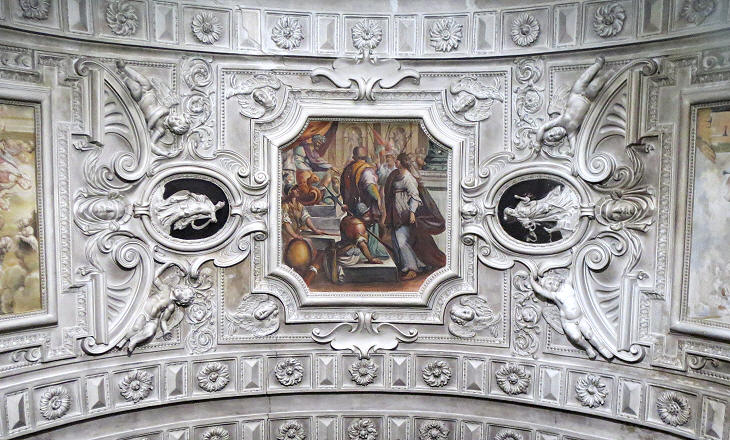 During the XVIth century there were 32 maiolica workshops in town and the artists involved in this activity were so many that they founded a guild and lavishly decorated a small church dedicated to St. Catherine of the Wheel, the patron saint of potters (because of the wheel). 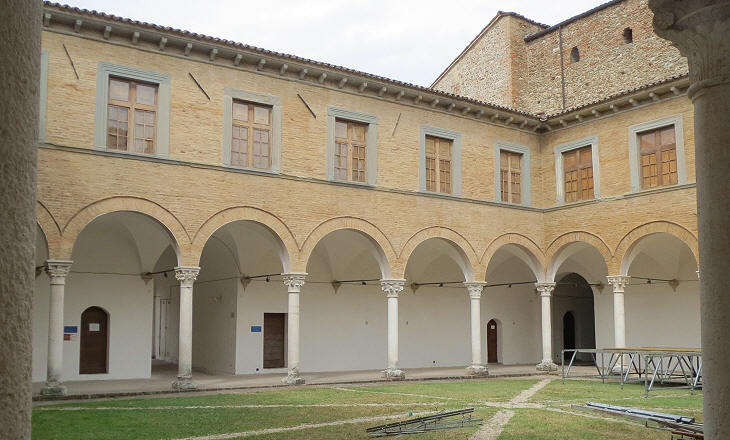 Castel Durante is situated ten miles west of Urbino and the Dukes (the da Montefeltro and after them the della Rovere) built a palace there where they stayed when they wanted to go hunting. Barco is an Italian word fallen into disuse to indicate a preserve where game is reared for hunting; the Dukes had a Barco outside Castel Durante. Duke Francesco Maria II was particularly fond of the location and he built a small lodge adjoining an existing Franciscan monastery at the Barco. 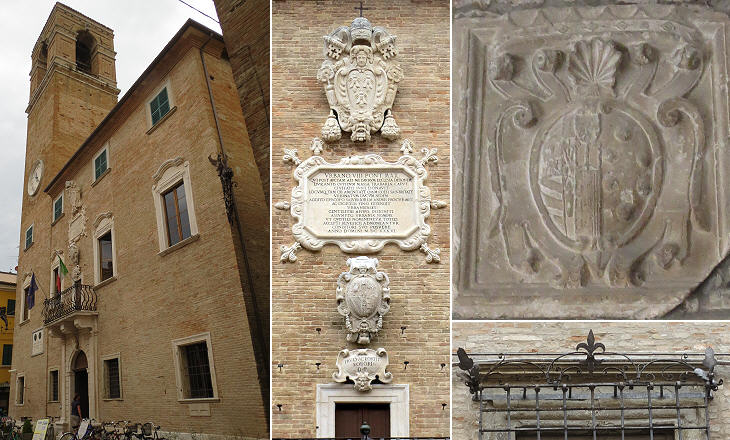 (left) Palazzo Comunale (Town Hall); (centre) coat of arms of Pope Urban VIII above an inscription celebrating the new name of Castel Durante (you can see it better in the introductory page); (right-above) coat of arms of Federico Ubaldo, Duke of Urbino and Claudia de' Medici, his wife; (right-below) decoration of Palazzo del Monte di Pietà with acorns (symbol of the della Rovere) and fleur-de-lys (most likely the symbol of Vittoria Farnese, wife of Duke Guidobaldo II)

Palazzo Comunale retains historical evidence of the last days of the Duchy. The marriage between Federico Ubaldo and Claudia de' Medici lasted only two years because Federico, aged eighteen, was found dead in his room in 1623. The couple had a daughter, Vittoria, who was not entitled to succeed because of the opposition of Pope Urban VIII who claimed that she could not be appointed Vicar of the Pope (and Duchess of Urbino) because of her gender. Duke Francesco Maria II bowed to the will of the Pope and in 1625 a papal envoy took over the government of the Duchy. Francesco Maria II retired to Castel Durante where he died in 1631. According to his wishes, he was buried in a small church outside the walls, the bells of which toll on the anniversary of his death.
Pope Urban VIII realized the citizens missed their Duke and in 1636 he raised the status of Castel Durante by making it a bishopric seat. In addition he gave the town his name. 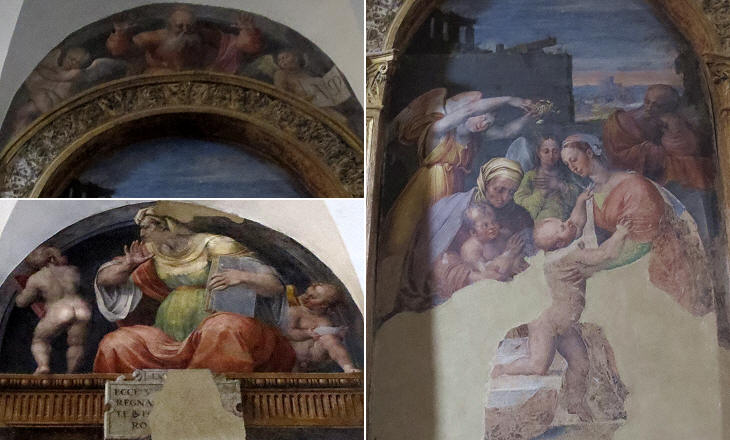 XVIth century Italian painters named Raffaello were added the suffix ino (which means small) to indicate their status in comparison to Raphael. Raffaellino del Colle (not to be confused with Raffaellino del Garbo) actually worked with Raphael in the decoration of la Farnesina in Rome. He was born in Sansepolcro in Tuscany, not far from the Duchy of Urbino. Some details of his frescoes in Oratorio del Corpus Domini, however, recall paintings by Michelangelo in Cappella Sistina, rather than works by Raphael. 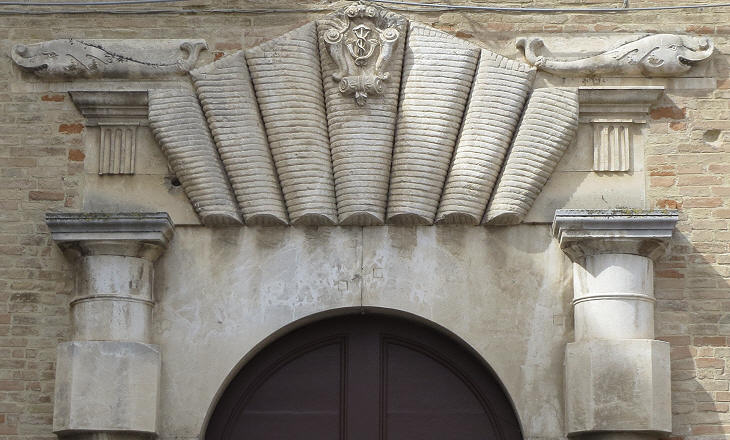 In the XIIIth century the Brancaleoni were the feudal lords of Castel Durante and other fiefdoms in Montefeltro and Massa Trabaria, e.g. Sassocorvaro. The last of the Brancaleoni married Federico da Montefeltro, but other branches of the family continued to enjoy a political role. Their palace in Urbania was probably designed by Girolamo Genga, the court architect. 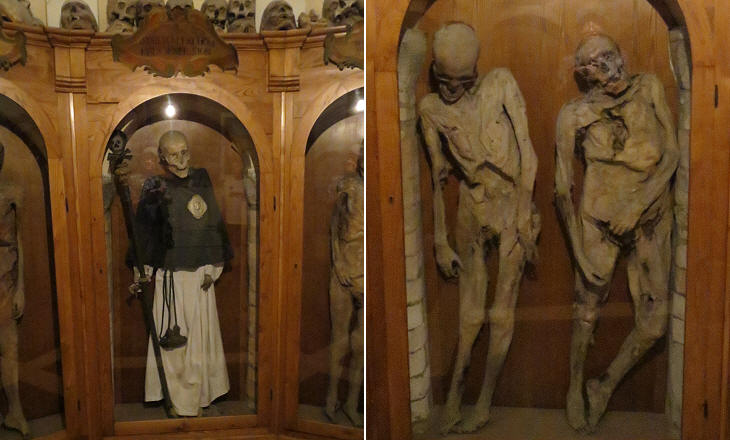 The ancient Romans did not allow tombs inside the pomerium, the line which marked the boundary of a town. This practice was discontinued when churches were built to house relics of the early martyrs. Eventually the rich built funerary chapels inside churches whereas the poor were buried in the ground outside them. In 1804 one of the first decrees by Napoleon Bonaparte as Emperor established that cemeteries should be situated out of town. In 1806 the decree was issued in the Italian territories subject to France. In 1813, during the removal of bodies buried behind the church of S. Francesco in Urbania, fifteen very well preserved corpses were found. Medical examinations indicated that almost none of the dead died of old age and one of them was most likely buried when he was still alive.