- Diyarbakir - The Gates
(Detail of a relief at Karatepe)

You may wish to see an introductory page to this section with a map first. Diyarbakir is covered in this and three other pages showing: the walls, Ulu Cami (the Great Mosque) and other monuments.
Four great gateways break this circuit. The Mardin Gate commands the terraced gardens, and the road that passes through it runs down to an ancient bridge over the Tigris. To the north- west and north the Aleppo or Mountain Gate and the Kharput Gate open on to a fertile plain, and the Yeni Kapu, the New Gate, stands above the precipitous southern bank. The lie of the ground makes it certain that the oldest fortifications of the city must have occupied much the same position as those which still surround it, and though the latter are proved by numerous inscriptions to be Mohammadan work of different periods, I should judge them to be built mainly upon ancient foundations. (..) The two main streets lie from gate to gate, intersecting each other at right angles, and since this is in accordance with an ancient scheme of city planning, the line of the streets may be as old as the first foundation of the town.
Gertrude Lowthian Bell - Amurath to Amurath - 1911

This city had formerly been a very small one, till Constantius while Caesar, at the same time that he built another town called Antinopolis, surrounded Amida also with strong towers and stout walls, that the people in the neighbourhood might have a safe place of refuge. And he placed there a store of mural engines, making it formidable to the enemy, as he wished it to be called by his own name.
(Ammianus Marcellinus - Roman History - Book XVIII - Translated by C.D.Yonge). The Constantius mentioned by Ammianus Marcellinus was a son of Emperor Constantine who was appointed Caesar by his father. Because Constantine died in 337 AD the walls of Amida (today's Diyarbakir) were built before that year. Constantius, after a long struggle with his brothers managed to become the sole ruler of the Roman Empire: he is usually referred to as Emperor Constantius II.
The walls of Amida and the town itself were designed in line with Roman practices: they had four gates broadly aligned with the cardinal points. Dag Kapisi was open to cars until the 1980s.

1. Night had put an end to the combat; and when a slight rest had been procured from sleep, the moment that the dawn, looked for as the harbinger of better fortune, appeared, Sapor, full of rage and indignation, and perfectly reckless, called forth his people to attack us. And as his works were all burnt, as we have related, and the attack had to be conducted by means of their lofty mounds raised close to our walls, we also from mounds within the walls, as fast as we could raise them, struggled in spite of all our difficulties, with all our might, and with equal courage, against our assailants.
2. And long did the bloody conflict last, nor was any one of the garrison driven by fear of death from his resolution to defend the city. The conflict was prolonged, till at last, while the fortune of the two sides was still undecided, the structure raised by our men, having been long assailed and shaken, at last fell, as if by an earthquake.
3. And the whole space which was between the wall and the external mound being made level as if by a causeway or a bridge, opened a passage to the enemy, which was no longer embarrassed by any obstacles; and numbers of our men, being crushed or enfeebled by their wounds, gave up the struggle. Still men flocked from all quarters to repel so imminent a danger, but from their eager haste they got in one another's way, while the boldness of the enemy increased with their success.
4. By the command of the king all his troops now hastened into action, and a hand-to-hand engagement ensued. Blood ran down from the vast slaughter on both sides: the ditches were filled with corpses, and thus a wider path was opened for the besiegers. And the city, being now filled with the eager crowd which forced its way in, all hope of defence or of escape was cut off, and armed and unarmed without any distinction of age or sex were slaughtered like sheep. Ammianus Marcellinus
In 359 the Roman historian Ammianus Marcellinus was among the unsuccessful defenders of Amida which was conquered by the Sassanids under the command of King Shapur II.
Amida however returned to Roman hands because the Sassanids were unable to consolidate their victories into a permanent occupation. An inscription in Latin says that Emperors Valentinian, Valens and Gratian rebuilt the walls of Amida; the three were co-emperors between 367 and 375. The Latin inscription is among those easternmost located, not only because Amida was situated near the eastern border of the Roman Empire, but also because Latin was much less used than Greek in this region. 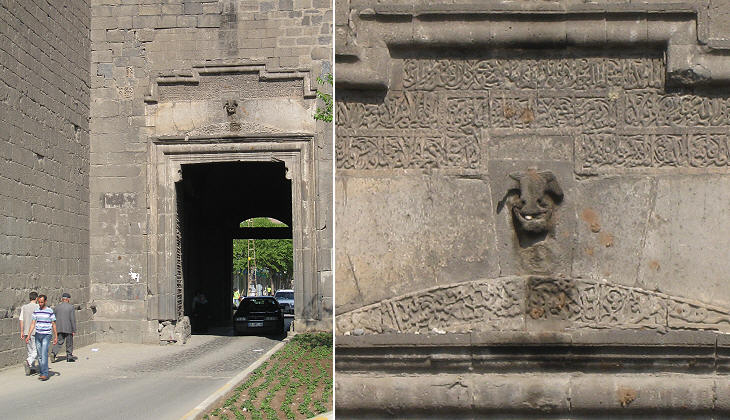 Urfa Kapisi: (left) side gate; (right) detail of its decoration

The western gate is named after Urfa, but in the past it was named after Aleppo, because the road leading to those cities starts from this gate. The gate has three entrances; the central one has been modified to allow the passage of large vehicles; that on the left side was decorated in 1183 with an inscription and a relief showing an eagle standing on the horns of the skull of an ox: this relief has become the symbol of today's Diyarbakir. 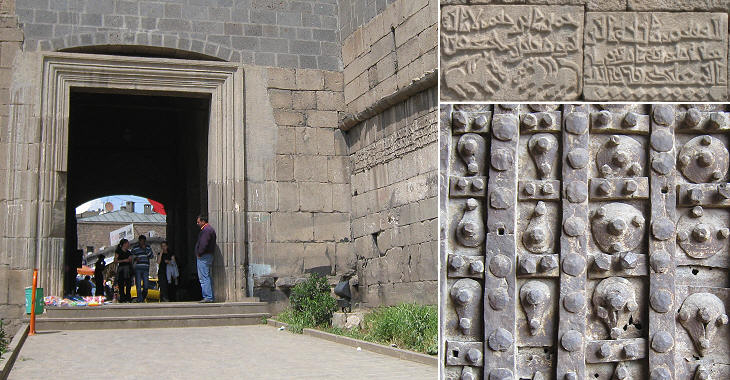 (left) Mardin Kapisi; (right-above) reliefs and inscriptions on the wall to the left of the gate; (right-below) detail of the iron gate closing the entrance

Mardin Kapisi is the southern gate from which the road leading to Mardin started; it had three entrances of which only one remains because the other two were walled up many centuries ago. The existence of three entrances supports the idea that ancient Amida was crossed by two large roads from Dag Kapisi to Mardin Kapisi and from Urfa Kapisi to Yeni Kapi (the eastern gate). Considering the number of columns and pieces of columns which have been employed in Ulu Cami and in strengthening the walls most likely these roads were colonnaded: the central track was reserved to chariots and pack animals and the lateral ones were used by pedestrians. 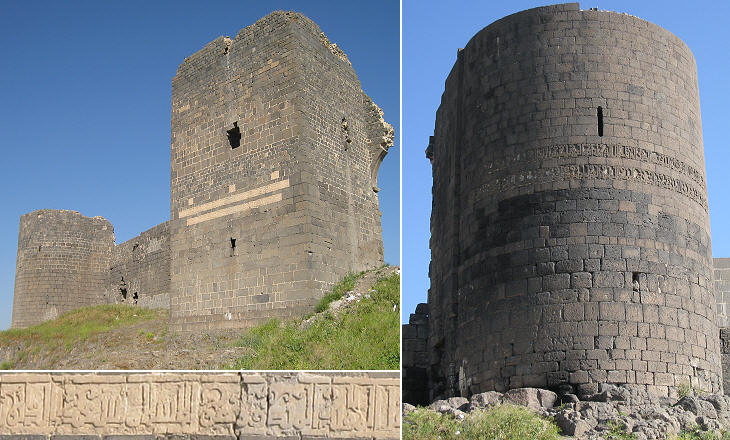 Towers on the sides of (lost) Yeni Kapi (New Gate); (inset) enlargement of a Kufic inscription

The fourth gate of ancient Amida was most likely a posterula, a small opening in the walls through which the peasants living along the river could enter the town.
The Arabs changed the name of the town in the VIIth century; it was then called Diarbekr (the Seat of Bekr) after the name of the tribesmen who conquered it. In the 1920s the name was slightly modified to make it sound more Turkish.

The valley of the Tigris from Yeni Kapi

Amida is watered by the Tigris, which passes close to it, making a kind of elbow: (..) but in the very centre of Amida, under the citadel, there rises a rich spring of water, drinkable indeed, but often tainted with hot vapours. Ammianus Marcellinus
From a postern gate in the north wall a road leads down to the river, passing under a cliff out of which gushes a sulphurous spring. As I watched the soldiers of the garrison washing their clothes in its waters, I tried to reconcile it with "the rich spring, drinkable, indeed, but often tainted with hot vapours," which Ammianus Marcellinus describes as rising under the citadel, and to see the men of the 5th Parthian Legion in the ragged groups standing about it. Bell
Probably not everybody was happy drinking from the spring mentioned by Ammianus Marcellinus; Yeni Kapi was also known as "Su Kapi" the "Water Gate" because it was used to reach the river and bring back jars of water; today there is a modern bridge which crosses the Tigris, but the historical point where bridges were built is located two miles south of Mardin Kapisi. (left) Saray Kapisi (Palace Gate); (right) reliefs on the palace of the Artukids

The citadel commands the north-east angle above the river; most of the space surrounded by its enclosing wall is occupied by modern buildings and by a mound whereon stood the castle of the first Mohammadan princes. Bell
The north-eastern section of Diyarbakir is separated by the rest of the town by walls; this citadel is located on slightly higher ground and its walls had the double purpose of providing a last defence against the enemy and of protecting the rulers of the town from rebellions and riots. The main gate is named after the saray (palace) of the Artukid rulers; a smaller gate is named after Dicle, the Turkish name for the River Tigris.

(left) Dicle Kapisi; (right) a tower of the citadel

The image used as background for this page shows a Greek inscription in a typical Roman pattern between two crosses at Dag Kapisi.