You may wish to read pages on Troy or Çanakkale first. 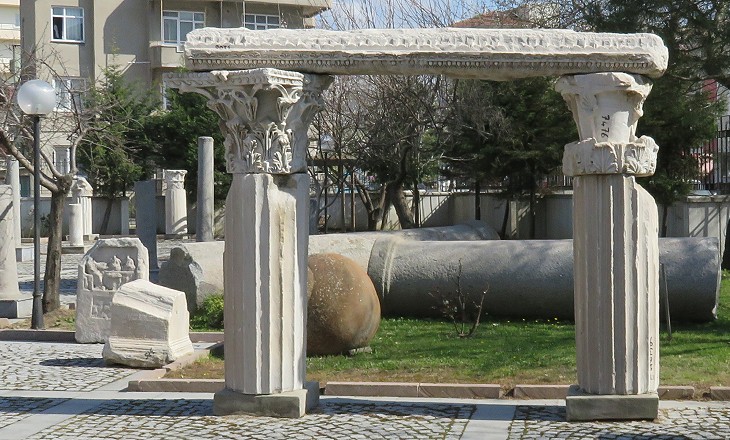 The site of the ancient city (Alexandria Troas, an ancient port opposite Tenedo) being now covered by a forest of oak-trees, it is impossible to see its ruins collectively; but for many miles the ground is rendered useless for agriculture by the multitude of broken stones and marbles and arches, which lie under the surface in every direction. I had fancied that the difficulty of tracing the foundation of Troy had been from the scarcity of remains, but I judge from this place that it may have been, on the contrary, from the confused numbers which meet the eye on every side.
Charles Fellows - Journal Written during an Excursion in Asia Minor in 1838
Fellows wrote this comment at the beginning of his journey through Troas, the region named after Troy and which today corresponds to the Vilayet (Province) of Çanakkale. 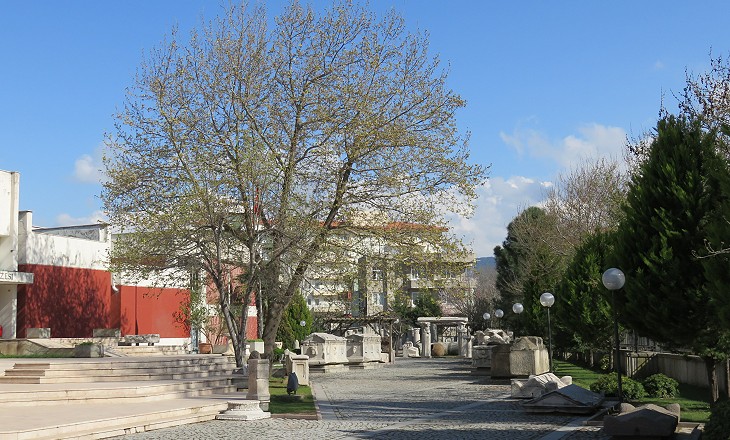 The Archaeological Museum building and garden

As Fellows noted Troas was very rich in signs of its ancient past, but for many years after his visit, statues, reliefs, jewels, etc. found in the region were sent to Constantinople or seized/acquired by museums and private collectors throughout the whole world.
Eventually in 1936 a former church at Çanakkale was used to store some findings. In 1960 a proper museum was opened and in 1984 its collections were moved to a new building surrounded by a small garden. 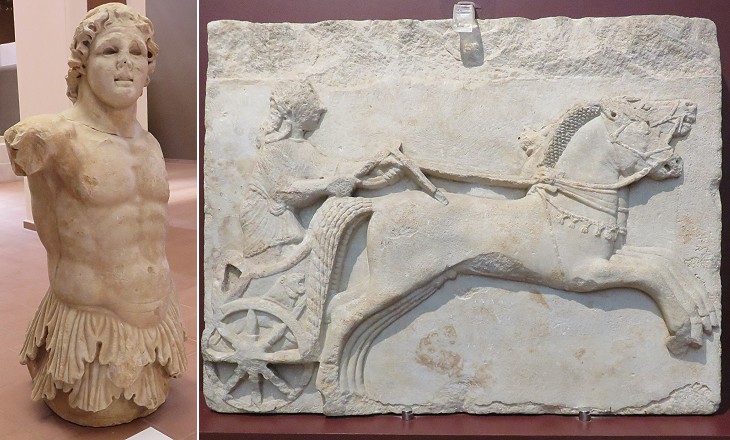 Most cruisers enter the narrow Dardanelles, pushing against wind and current in order to visit the superb city of Istanbul. Once in the Sea of Marmara it's best to keep south, sheltered from the usual headwinds.
From JimB Sail, a website Helping Skippers plan European Cruises.
This piece of modern advice was followed by the ancient Greeks who founded a series of ports on the southern shores of the Dardanelles and of the Sea of Marmara. Ancient ships were very slow so the ports where they took shelter were rather close to each other. 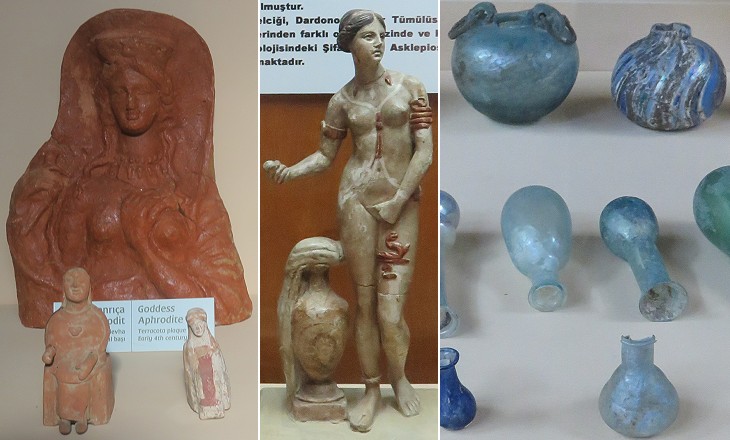 (left) Aphrodite (IVth century BC) from Tenedo; (centre) Aphrodite (from an original by Praxiteles, aka Capitoline Venus) from the Dardanos Tumulus, very near Çanakkale (IIIrd century BC); (right) glass bottles from Hamaxitus, a port not far from Assos

At the castle I was with the English droggerman (interpreter), who set out with me to the south on the twenty-seventh, in order to see the situation of old and new Troy: We went by the sea-side, and in an hour came to the cape, called by the Turks Kepos-bornou, and by Europeans Cape Dardanus. Which I take to be the promontory Dardanium of the antients; and I observed on it a rising ground, which seemed to have been improved by art, and might be the spot where old Dardanus stood, which was but a small town.
Richard Pococke - A Description of the East and Some Other Countries - 1745
Some exhibits of the museum are the yield of recent excavations at Troy, but the majority were found inside ancient tombs of the region. The most interesting ones come from the Dardanos Tumulus, a burial mound similar to those at Micene and Vergina, named after the mythical founder of a town, hence the Dardanelles.
Dardanus Iliacae primus pater urbis et auctor (Dardanus the first father and founder of the city of Ilium)
Virgil - The Aeneid - Book VIII. Virgil made the Italian town of Corythus (today's Cortona) the home of Dardanus and the cradle of the Trojan people. 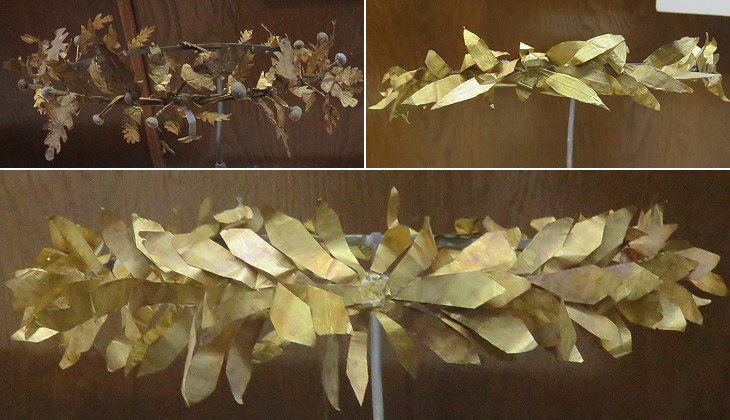 Golden wreaths from the Dardanos Tumulus (IVth century BC)

Golden wreaths assumed to be crowns of King Philip II of Macedonia are the best known and admired findings of the excavations at Vergina. The Dardanos Tumulus shows that their use was not limited to Macedonia and to kings. They were light to wear and probably a symbol of wisdom/glory (including that earned by the winners of athletic games) rather than might/sovereignty. British Museum: golden wreath acquired in 1908 from a dealer who claimed it had been found near Çanakkale

You may wish to see a golden wreath which was found near Paestum in Italy. 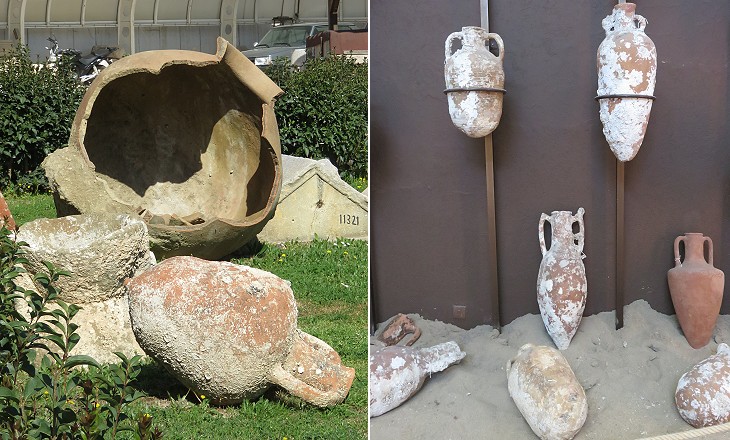 Amphorae found in shipwrecks along the coast of Troas

Every year in summer millions of snorkelers plunge into the hot waters of the Mediterranean Sea with the secret hope of noticing the arm of an ancient bronze statue emerging from the sand. This happened to a Roman holidaymaker in 1972 at the beach of Riace, in Calabria. Such important archaeological findings do not occur very often, but a number of shipwrecks have been found along the coast of Troas. The amphorae they contained provided interesting information about the commodities ships carried through the Dardanelles. 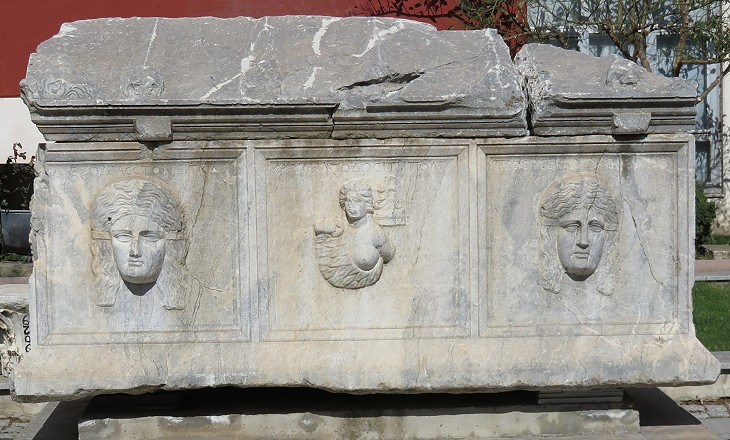 Sarcophagus (IInd century AD). The image used as background for this page shows a detail of another sarcophagus

Amazonomachies were often depicted on the front of sarcophagi boxes; according to tradition Amazons burnt their right breast in order to better fight, however they were usually portrayed with their right breast bare (as in a mosaic at Antioch). In this sarcophagus a single amazon holding an axe on her shoulder is shown with her left breast naked, which is not very usual, but can be observed elsewhere e.g. in statues in Rome. 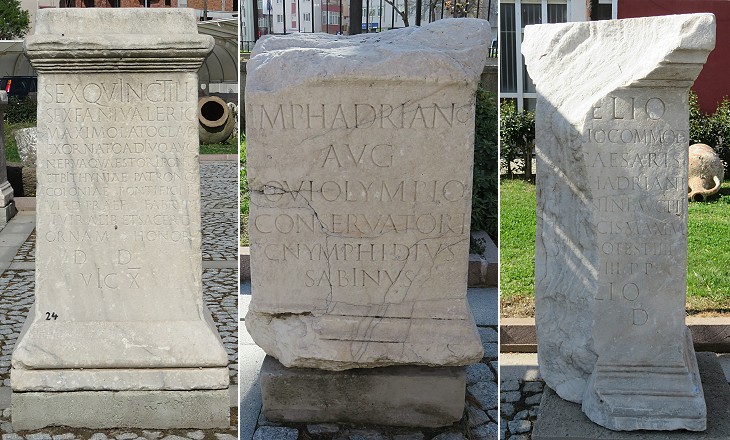 A number of Latin inscriptions making reference to the so-called adoptive emperors (IInd century AD) celebrated improvements which occurred in towns of Troas. It was a period during which many facilities (aqueducts, baths, granaries, bridges, etc) were built and statues were erected to the reigning emperors as a sign of loyalty to Rome. 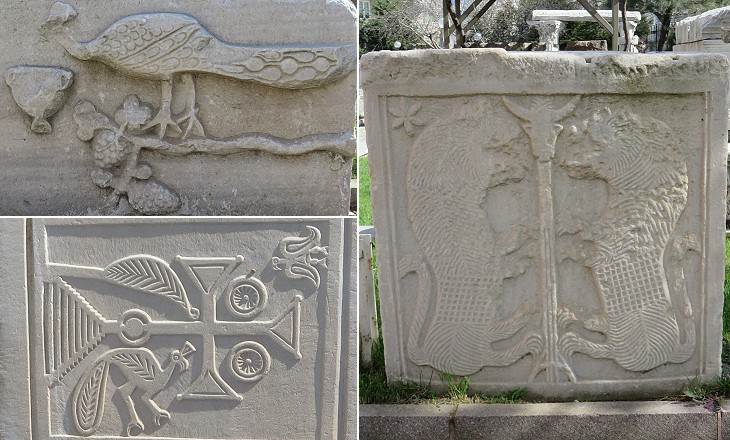 (left) Early Christian reliefs; (right) emblem of the Karasid rulers of Troas in the XIVth century. It is similar to that of the Mentese at Becin Kalesi

The garden of the museum has some interesting exhibits of the Byzantine and pre-Ottoman periods.